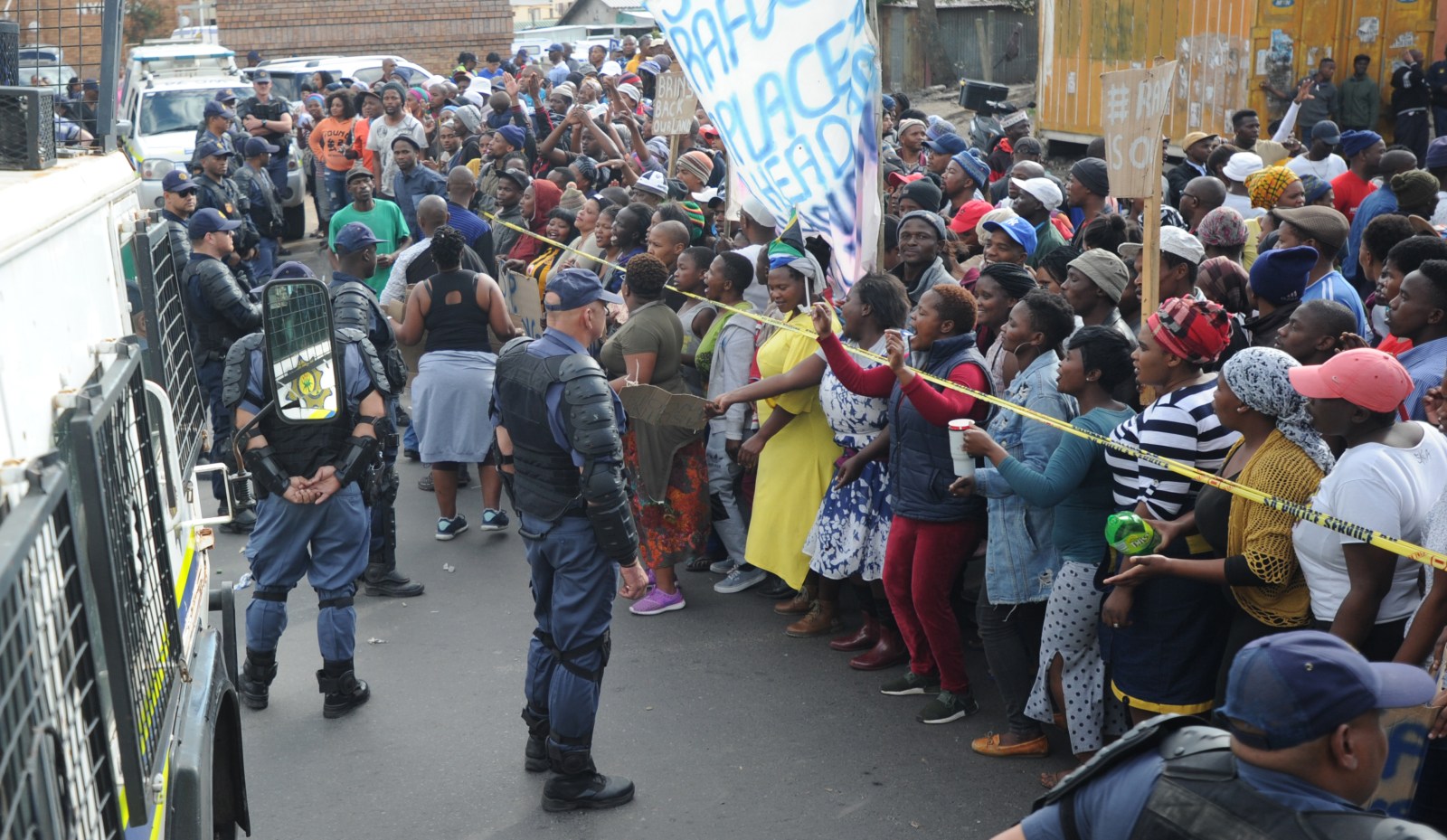 A group of people oppose the march gather outside the Nyanga police station during a Democratic Alliance (DA) picket led by Mmusi Maimame calling for military intervention to combat crime the Western Cape on July 19, 2018 in Cape Town, South Africa. (Photo by Gallo Images / Brenton Geach)

In the Western Cape alone, there have been 2,676 arrests for murder, 2,207 arrests for attempted murder and 8,188 arrests for aggravated robbery in the financial year of 2017/2018. There is a lack of crime-fighting technology such as CCTV cameras and licence plate recognition software in some of the hot crime spot areas of the Western Cape.

Brigadier Preston Voskuil, who gave an overview of the Western Cape’s crime statistics to the Standing Committee in the Provincial Parliament on Wednesday, said that murder, attempted murder, and robbery were three of SAPS’ biggest challenges.

Gang violence was the most singled-out issue behind the murder and attempted rate in areas such as Nyanga, Mitchells Plain, Delft, and Bishop Lavis. Poor lighting, high levels of unemployment, substance abuse and spatial development contributed to the rise in crime.

Voskuil said it was important that the historical roots of the emergence of gangs was researched, and that investigations were implemented to find solutions. Gang members were often both praised and feared in communities, with most of them being close family members or well known. Voskuil said that the SAPS could not stop gangs on their own, they need intervention and whistle-blowers from families, churches and community organisations to promote good values in the youth and communities.

Robberies were the third highest common cause for attempted murder in areas such as Nyanga, Gugulethu, Khayelitsha and Delft and there has been an evident increase in taxi violence in 2018.

Many of the areas most affected have high numbers of informal settlements and backyard dwellers. Because these areas are overcrowded, the prevalence of crime is high and police are restricted from doing their job efficiently.

There is also a lack of crime-fighting technology in some of the “hot spot areas” such as CCTV cameras and licence plate recognition software.

The top three stations with the highest reported cases of murder were Nyanga, Phillipi East, and Delft. The top weapon or instrument used to commit murder was a firearm – 42.3% – and the top day crimes were committed on Sundays between 21:00 and 23:59.

The top three stations in aggravated robbery were Nyanga, Khayelitsha and Mitchells Plain.

With the highest number of murders, aggravated robbery, carjacking, house robbery, business robbery and, with one police officer to every 628 residents as reported by the Democratic Alliance, Nyanga is the crime capital of the 10 mentioned stations in the Western Cape.

Even though murder, attempted murder, and robbery are a continuous challenge for the SAPS, there has been a decrease in the rate of burglary, theft, assault and sexual offences.

Over 1,400 cases of sexual assault against children have been reported.

In the 2017/2018 report made up of 38 slides, the two slides that focused on sexual assault reported that there have been over 7,075 charges of sexual assault laid in the Western Cape. This is 40 less than the year before. Of those reports, only 4,821 arrests have been made. Pat Lekker, a member of the ANC, said that one of the challenges in the sexual assaults of minors is that some mothers do not report people who violate their children.

“You find that children will be sexually assaulted by their fathers, but because the stepfather brings in money, parents won’t report it.”

In the short presentation of the crime stats, Brigadier Preston Voskuil said the main contributors to rape were “overcrowded households, substance abuse, domestic violence, and psychological disorders”. He also noted that most of the sexual assaults reported in girls happened from the age of 11 to 14, while it happened from 6 to 10 years old in boys.

The SAPS presented a strategy, called the operational approach to decrease crime in the province. The approach would among other things strengthen the crime prevention capabilities of the SAPS and address repeat and multiple offenders. DM