Anti-corruption watchdogs call for Integrity Commission for the Hawks 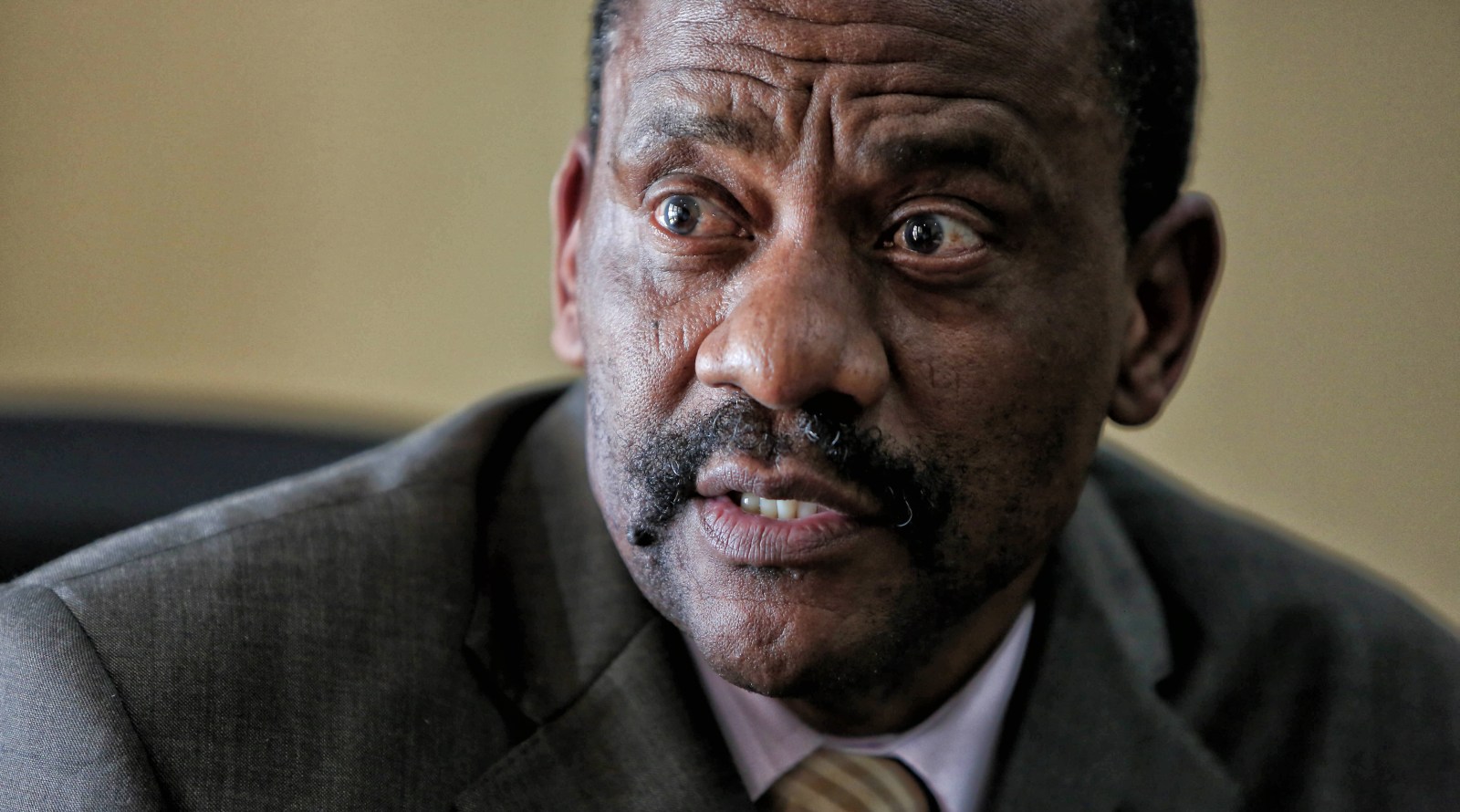 Head of the Hawks Lt Gen Godfrey Lebeya, 57, during an interview on September 07, 2018 in Pretoria, South Africa. Lebeya, who took over as head of the Hawks in June, is determined to establish a regime of clean, impartial and effective investigation in the unit. (Photo by Gallo Images / Sunday Times / Alaister Russell)

Accountability Now and the Cape Town Peace Centre have written to the state attorney requesting that consideration be given to the establishment of a new Chapter Nine institution that is in line with existing legislation on the structure, operational capacity and the location of the Directorate for Priority Crime Investigation (DPCI).

In a letter written to the State Attorney on 18 September, Accountability Now director Paul Hoffman highlights that the 2011 Constitutional Court finding (known as the Glenister ruling) that the Hawks were not sufficiently independent and that the state had failed to fulfil its obligations “to respect, protect, promote and fulfill the rights in the Bill of Rights as required by section 7(2) of the Constitution” had not been implemented.

Hoffman said he was writing on behalf of the Cape Town Peace Centre, a Cape Town NGO, which hoped to follow through on the endeavours of Hugh Glenister, a Gauteng businessman who litigated in the Constitutional Court on three occasions in an attempt to secure independent anti-corruption machinery of state.

“In the view of the CTPC the current structure and operations of state machinery in this sphere do not comply with the criteria laid down by the Constitutional Court in the Glenister cases decided in March 2011,” said Hoffman.

Hoffman’s letter, which was copied to IPID, the Auditor General, the Inspecting Judge of the DPCI and the Human Rights Commission, was accompanied by an affidavit which listed, among 13 respondents, the president, as head of the national executive, the minister of police as responsible minister as well as the Speaker of the National Assembly and the chair of the National Council of Provinces on behalf of the legislature, the public protector as well as the AG.

The Auditor General, said Hoffman, had caused more than 3,000 dockets to be referred to the NPA concerning corruption in the national supply chain.

The SAHRC had been copied in “because failure to address corruption effectively and efficiently has been a human rights issue since G II in March 2011”.

“We are also copying the SIU which has recently complained that 686 matters it wishes to have prosecuted have not received the necessary attention,” wrote Accountability Now.

Hoffman set out to the State Attorney that corruption in South Africa had “gone from bad to worse since November 2014, when last the Court considered the constitutionality of the machinery of state to prevent, combat, investigate and prosecute corrupt activities and organised crime”.

No one who was politically connected, said Hoffman, had faced trial in South Africa as a consequence of the efforts of DPCI or any other institution of state active in the sphere since 2014.

“Indeed, the prediction of the Chief Justice in the opening paragraph of G III regarding the ‘malady’ of corruption ‘graduating into something terminal’ appears to be coming to pass,” noted Hoffman.

The “matrix” on which the Cape Town Peace Centre will rely, apart from various published books on State Capture and the Public Protector’s State of Capture report, includes the Constitutional Court August 2018 judgment in the civil litigation with regard to the invalid “disappointment” of NDPP Mxolisi Nxasana as well as evidence currently being presented to the Zondo Commission of Inquiry into State Capture.

Accountability Now and the CTPC are attempting to secure the establishment of a new Chapter Nine institution “to prevent, combat, investigate and prosecute serious corruption”.

“The CTPC acknowledges that the political will to do so is not in place at present and that litigating to create an Integrity Commission is not legally feasible,” said Hoffman.

In April 2016, Accountability Now presented to the Constitutional Review Committee of the National Assembly submissions on this “Integrity Commission”. The committee, said Hoffman, was considering these.

“Our client [CTPC] considers that in the current political situation of SA, the prospects of developing the political will to create an Integrity Commission are slim but it is in all fairness willing to give the state the opportunity of doing what is accountable and responsive in the circumstances…”

The CTPC wanted to avoid having to litigate “over the manifest failure of the state to implement the decisions of the Constitutional Court in the G II and G III cases”.

Hoffman reminded the State Attorney that the court had “laid down in a binding fashion the five criteria for the proper functioning of the anti-corruption entity as: specialisation, training, independence, resources and security of tenure of office”.

The court had envisaged a single entity that would be built on these criteria.

“This is apparent from G III paras [1 & 2]. Instead, the executive has elected to create an ‘Anti-Corruption Task Team’ drawn from a multitude of agencies of the state.”

The ACTT, said Hoffman, was dysfunctional, its work rate “abysmal” and its success rate “appallingly poor”.

The DPCI as an anti-corruption entity was not a valid response to the judgments in G II and G III, suggested Hoffman, as its work ranged from human trafficking to rhino poaching.

Over and above this the training of Hawks in anti-corruption work seemed to be lacking and the work and success rate of the DPCI over the years had “dwindled alarmingly”.

With regard to the independence of the Hawks, this was “lacking to such an extent that it is fair to suggest that it is completely absent when it is most needed. This has manifested itself in the referral of corruption matters to the OPP or detective services in SAPS instead of the Hawks.”

Hoffman reminded the state attorney that when General Anwa Dramat had called for the dockets on the Nkandla investigation “he was immediately illegally suspended on trumped up charges of kidnapping, charges that could not conceivably succeed given the unsuccessful fate of related charges against Robert McBride of IPID”.

The NPA withdrew charges against Dramat in September.

Hoffman said a tour of Hawks offices around the country revealed a lack of resources.

“Lifts do not work, filing systems are inadequate, staff members are dispirited, vacancies are not filled and a general air of dilapidation hangs over the DPCI offices and officials.”

This was, he said, a clear breach of the requirements of the court in G II, as confirmed in G III.

“It is arguable that the Hawks are at least partially captured by those bent on State Capture, as revealed in evidence before the Zondo Commission. Treating criminal complaints as ‘DA matters’ which must be derailed is subversive of the proper administration of criminal justice. The belated suspension of Zinhle Mnonopi, for doing just that, suggests that the Hawks know, after being reminded, that it is wrong for senior personnel to attempt to defeat the ends of justice by suborning witnesses,” said Hoffman.

New Hawks head General Lebeya had made, on 15 August, a presentation to the police portfolio committee in which he confirmed that the capacity, resources and skills of the Hawks were either lacking or in short supply.

The hounding out of office of Generals Dramat and Johan Booysen spoke volumes with regard to the security of tenure of Hawks personnel.

“The dismissal of Shadrack Sibiya on trumped-up charges and the sidelining of anyone willing to do his or her job properly shows that the Hawks do not enjoy security of tenure of office in the current set-up. The fate of General Ntlemeza, indeed, even the thought that he might be an adequate leader of the Hawks, shows that the executive has completely lost its way by seeking to maintain control over the Hawks and their activities.”

This was in breach of the requirements of the court, said Hoffman.

The CTPC regarded the current housing of the anti-corruption entity (the ACTT) within the SAPS to be unconstitutional.

“The SAPS is dysfunctional, led by crooked personnel like Major-General Mnonopi, currently suspended and number three in seniority in the Hawks, and constitutionally under the control of the executive,” said Hoffman.

While the court had required that there be no executive influence or interference with the anti-corruption entity, said Hoffman, the Hawks “are constantly interfered with by the executive, to the detriment of their efficient and effective functioning”.

The DPCI should report to Parliament, not to the executive, he said.

“If the process of the creating of an Integrity Commission is going to be stillborn, the only way in which to address the current shortcomings in the anti-corruption entity of SA is via negotiation with your clients, and failing success in the negotiations, litigation aimed at rendering the Hawks constitutionally compliant,” warned Hoffman.

It was “up to your clients”, said Hoffman, to decide whether to create an Integrity Commission or to discharge an obligation to render the Hawks constitutionally compliant.

“If the political will to do so remains absent, the notion having been first suggested to Parliament in 2012, the CTPC is left with no alternative but to approach the Constitutional Court for relief that will be able to address the failure of the state to deal with corruption in the manner required of it by the Constitution as interpreted by the Court in G II and G III in a manner which is binding on the state.” DM