eSwatini elections and the tomfoolery of observer missions 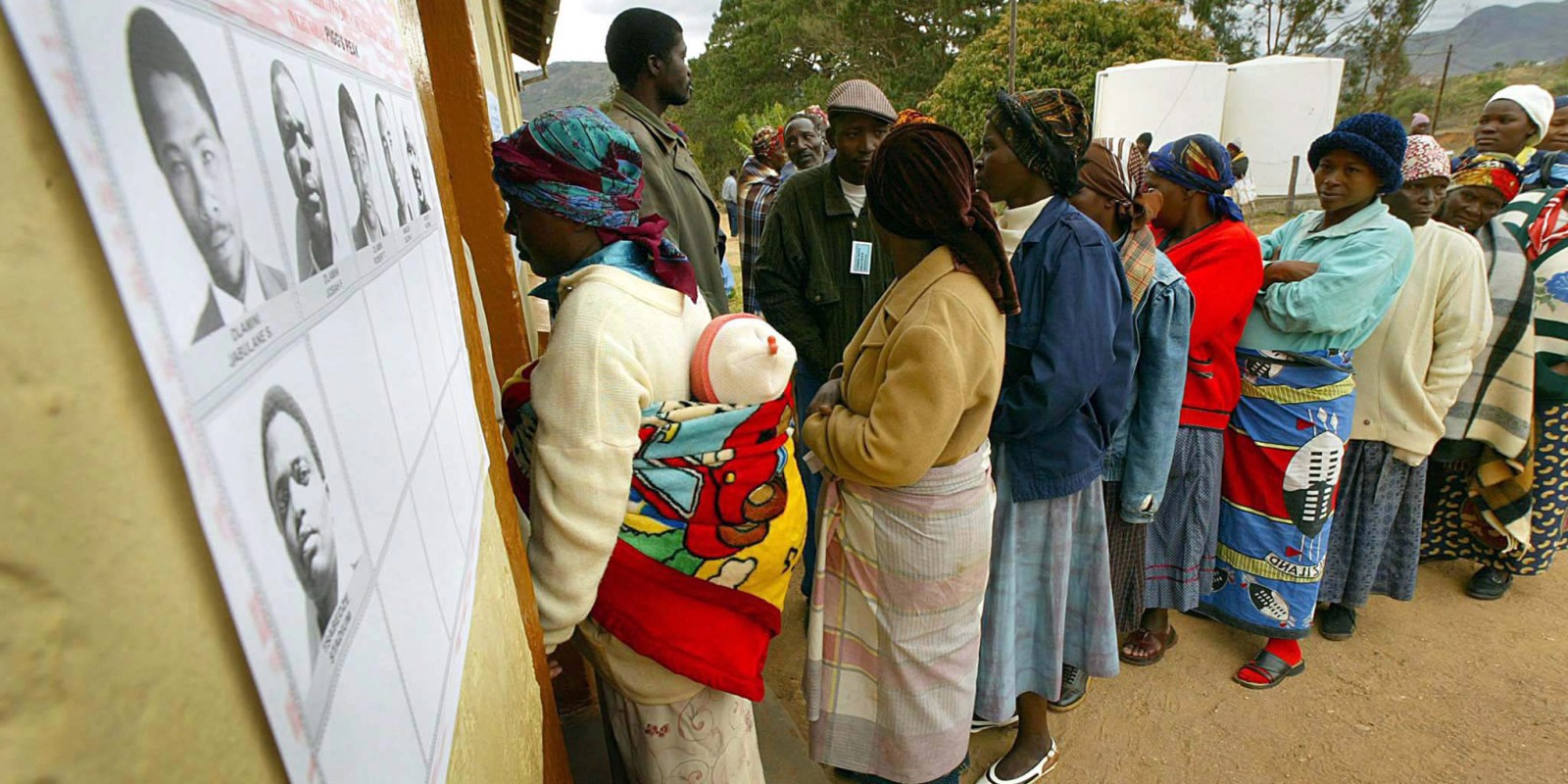 Voters queue to cast their votes in the Swaziland general elections at a church in the Piggs Peak area on Saturday, 18 October 2003. Photo: EPA/KIM LUDBROOK

The recently concluded national elections in the small country of eSwatini, formerly called Swaziland, has once again forced us to re-examine the purpose of an election in an absolute monarchy. More specifically, it requires of us to ask hard questions about the continued flocking of observer missions to observe an election routinely declared not credible.

On Friday, 21 September 2018 Swaziland went to an election and did well to avoid the scrutiny of international human rights organisations. At best, the elections were underwhelming and debased of all that is expected in a national election at worse.

Much of the press coverage after the elections noted the lack of electoral razzmatazz that should ordinarily characterise elections. If anything, it was the usual laissez-faire toy election Mswati throws around from time to time to legitimise his authoritarian rule. The reason for this is that elections in eSwatini are conducted under a somewhat confusing yet archaic system of government called Tinkhundla, a true political relic from medieval pre-enlightenment period.

As many political observers have previously noted, all social, political and economic problems facing contemporary eSwatini stem from this rotten political system and its political figurehead, King Mswati III.

Historically, the Swazi progressive movement has pointed out that the Tinkhundla electoral system does not conform to the most basic of standards set by the Southern Africa Development Community (SADC) Principles and Guidelines Governing Democratic Elections and the OAU/African Union (AU) Durban Declaration on the Principles Governing Democratic Elections in Africa. For this reason it must come as no surprise that the recent AU observer Mission decried the absence of political parties in the elections.

It must be noted that for the first time in our history the elections were conducted under a cloud of uncertainty following the violently crushed workers’ strike that threatened to throw the entire electoral circus into disarray. Most of the demands of the workers were, read in totality, a rejection of the system and its inability to satisfy the social, economic and political needs of the nation.

For the uninitiated, the Tinkhundla system of royal rule, sometimes called Monarchical democracy, was created through the promulgation of the Establishment of the Parliament of Swaziland Order of 1978. Under this system, elections of public representatives to the House of Assembly take place in two phases. The first entails the election of candidates through a public gathering at the village level under a local chief. For the second phase, the candidates get elected within an Inkhundla (the singular of Tinkhundla).

All candidates campaign on local issues with no national agenda since political parties remain banned. Even more tragic is that all candidates espouse no ambition to exercise executive power as this is a preserve reserved for the monarch.

Essentially, Tinkhundla elections can be termed an “organised certainty” since they reproduce the prevailing political status quo through electing a parliament subservient to the king and an executive whimsically appointed to pursue royal interests. The outcome of this is that the ruling Dlamini family, at the apex of which is the king, finds itself enjoying unfettered monopoly over power and state resources and a parliament littered with depoliticised shoe shine girls and boys all competing for royal patronage and favours.

None could best explain the problem of governance this presents than former Minister of Commerce, Industry and Trade Gideon Mhlongo. In a speech delivered at the 63rd anniversary of the adoption of the Universal Declaration of Human Rights in November 2011 Mhlongo noted that in its current configuration Tinkhundla as a system of governance is incapable of delivering on a national agenda and cannot deliver continuity between successful governments.

Said Mhlongo: ‘‘Evidence of this is the inherent lack of continuity in our government system such that when a new Prime Minister is appointed he will start his/her own agenda detesting almost all that was done by the previous prime minister. To crown it all there are no handover notes between the outgoing and incoming prime minister which means Tinkhundla is not a system but an individual person’s vision based governance system… This reality gets worse as new cabinet ministers behave the same as a new prime minister. MPs do the same thing, Tindvuna Tetinkhundla (community headmen) and Bucopho. This means that very five years we have a new government programme not informed by the previous five years.”

Sadly, this is what Swazis have faced under this system, which explains the lack of a systematic national developmental agenda in the country.  The rest of the democratic world, however, understands elections to be an instrument of democratic and peaceful transfer of power with the consent of the majority. Therefore, the rights to join or form a political party and canvas for political office is a practical expression of the universal right to freedom of assembly and association.

Elections, therefore, become important because they provide a smooth transfer of power, hence they must be conducted with integrity to strengthen democracy, encourage accountability and politicise the people on the issues that must take centre stage on government policy.

In the case of eSwatini,however, elections have done nothing but brainwash and depoliticise the electorate leaving them clueless about governance issues while sucking the potential out of the country.   Worth noting here is that almost all the observer missions who observed previous elections in eSwatini spoke of the need to register political parties and ensure they run for office.

Their recommendations are continuously ignored by the government which leads one to wonder why observer missions bother with these phony elections .

For example, the Elections Experts Mission (EEM) report on the last elections noted that, “…Although the electoral legal framework contains the technical aspects required for the proper administration of elections, it does not conform to international principles for the conduct of democratic elections, as it does not respect one of the fundamental rights for participation –the freedom of association. In this context, the electoral process, and the overall democratisation process is impaired since its start…”

Again the African Union Election Observer Mission (AUEOM) report of the last elections also observed that “…despite the guarantee of fundamental rights in the Constitution, the rights of association and assembly contained in Article 14(1) (b) of the Kingdom of Swaziland Constitution and Articles 10 and 11 of the African Charter on Human and People’s Rights, the rights with regard to political assembly and association are not fully enjoyed. This was evidenced by the Mission’s observation that candidates contested elections as individuals and not under political parties… Based on its observations and consultations, the Mission urges the Kingdom to review the Article 79 of the Constitution to be in conformity with Articles 14 (1) (b) and 25 which enshrine the fundamental freedoms of conscience, expression, peaceful assembly, association and movement as well as international principles for free and fair elections and participation in the electoral process and specifically the OAU/AU Durban Declaration on the Principles Governing Democratic Elections in Africa…”

For its part, the Commonwealth Observer Mission has twice found eSwatini elections to lack credibility and not worth the time and money.

The 2013 SADC Lawyers’ Association (SADC LA) Election Observation Mission was even more damning in their finding on the structural, administrative and political weaknesses of the Tinkhundla elections. It noted and detailed many observations about the administrative incompetency, legal conflicts plus the political hollowness of the process.

The EISA Technical Assessment Team Report of the last elections also came to the same conclusion. The question, therefore, is why do SADC and AU continue to send observer missions if their own recommendations are ignored and the election fails the test of the most basic of the standards they set for countries? What is a point of observing an election where the king is the winner even before the game is played? DM