Tom Moyane signed off on a dodgy R200-million SARS contract to global advisory firm Gartner in July 2015. Gartner then illegally gifted a huge chunk of this tender to the company of Moyane’s long time friend, Patrick Monyeki.

This article was first published on 25 September 2018 by Daily Maverick.

Questionable businessman Patrick Monyeki has been in the news for all the wrong reasons over the past decade. Lucrative contracts at the Department of Correctional Services, Government Printing Works, State Information Technology Agency and South African Social Security Agency (Sassa) involving Monyeki’s companies are currently being investigated for a range of alleged criminalities. In these instances, Tom Moyane appears to have been his blesser.

Where Moyane went, Monyeki followed – and so did the alleged illegal contracts. No hard evidence of this lucrative relationship has emerged yet, other than eyewitness alleging a mutually beneficial “friendship”. When questioned, Moyane did concede in Parliament that Monyeki was his “friend”, but denied allegations of his involvement in criminality. The crippled Hawks have dallied on an investigation into Moyane and Monyeki for years.

Moyane’s disastrous four-year tenure at SARS, however, brings the pair’s relationship into sharp focus and strengthens the established theme.

Scorpio can reveal that global advisory firm Gartner breached its contract with SARS in order to give a huge chunk of its R200-million tender to Monyeki’s company Rangewave Consulting Pty (Ltd) after winning the IT strategy review tender. (Rangewave may sound familiar to those readers who closely followed the Sassa saga – amaBhungane wrote about it here)

Moyane participated in the final approval of the contract to Gartner. Rangewave received an astonishing 40% of the contract value, amounting to an approximate R80-million, sources claimed. Earlier in 2018 Rangewave’s CEO and director Robert Hunter as well as Monyeki confirmed the contract value and expressed worry to sources about a possible backlash on receiving the contract. Monyeki resigned as director in March 2018, but is still a major shareholder in the company he established. Hunter declined to speak to Scorpio citing “confidentiality” issues. Monyeki, who allegedly feared for his life after a recent fallout with Moyane, seems to have blocked this writer’s telephone number from phoning or WhatsApping him. He read, but did not answer, specific questions. Gartner sidestepped direct questions. (Read Gartner’s full statement here.)

Tom Moyane was appointed as SARS Commissioner in September 2014. Days into the new job – of which Moyane knew close to nothing – he made the drastic and disastrous decision to stop SARS’ extensive IT modernisation programme. SARS’ modernisation programmes can’t be stopped, though – the entire revenue gathering system would grind to a halt (think PAYE, VAT, etc.). So, shortly thereafter, Moyane initiated a broad IT and modernisation strategy review. The scope of the contract included a review of the modernisation programme Moyane stopped right after his arrival. Because the work was highly “specialised”, SARS initiated a closed tender with only one IT company, EOH, as Gartner’s competition.

Closed tenders are unusual and only allowed in very specific circumstances. Gartner won hands down, without the crucial Treasury approval, a spokesperson from National Treasury told Scorpio in a written response.

On 20 July 2015, Moyane himself participated in the final approval of awarding the IT strategy review contract worth R200-million to Gartner, SARS confirmed. Sources claim Moyane made it known to Gartner that they must appoint Rangewave or forfeit the contract.

Scorpio could find no evidence to support the sources’ verbal disclosure. However, based on the objective assessment, it is clear that Gartner for some reason took on a huge risk in order to get Rangewave as a partner. This contract was not subject to the appointment of a BEE partner, and if Gartner had to subcontract some small portion, a clause in its contract with SARS dictated it should ask permission to do so.

After receiving the contract, Gartner did three extraordinary things:

In simple terms it means Moyane signed off on a lucrative and questionable contract to Gartner, which received the closed tender based solely on its supposed expert knowledge of the field. Gartner then breached its contract with SARS and secretly pledged an extraordinary 40% of its fee to Rangewave, a company indirectly linked to Moyane. Rangewave was supposedly appointed to prop up Gartner’s expertise – a move that puts into question whether Gartner really was the best company for the job and whether the contract really should have been a closed bid.

Gartner sidestepped direct questions about its relationship with Moyane and Monyeki. Spokesman Andrew Spender instead claimed that Gartner “strives to maintain strict compliance with all applicable laws, regulations and standards…”

Spender continued, saying “in compliance with BEE we engaged Rangewave, a local vendor we identified from a list approved by SITA”.

There are two things very wrong with Gartner’s statement:

Spender also attempted to throw SARS a hospital pass, saying the revenue service “informed us that our contract was reviewed and approved” by National Treasury.

A National Treasury spokesperson denied this, saying Gartner “breached” its contract with SARS by appointing Rangewave Consulting Pty (Ltd) without asking permission to do so.

“Gartner should have indicated in its [tender] proposal that it will sub-contract some work to a BEE partner…”, a National Treasury spokesperson said, and had to pick this BEE partner from the “SARS database in a fair and transparent manner”.

“We don’t have anything further to add to our original statement.”

In terms of the Companies Act, Rangewave must inform Scorpio this week of the exact position of Monyeki’s shareholding in the company. On its website, Rangewave claims its founding partner, “who is a black South African citizen”, owns 25.1% of the business.

The second issue concerning SARS, Monyeki and Moyane is former SARS Chief Officer Jonas Makwakwa. The Financial Intelligence Centre red-flagged 75 questionable cash deposits to Makwakwa between 2010 and 2016. One series of payments highlighted by the FIC was labelled as the Biz Fire Worx-payments – a total of R480,000 that was siphoned from the Department of Water Affairs and Forestry in February 2015 through the different bank accounts of six entities right into Makwakwa’s personal account in April 2015.

The trail of money made a loop through various bank accounts that the FIC described as a possible money laundering ring. A Scorpio investigation confirms that Monyeki is closely linked to five of these six entities, with a majority shareholding in some of the companies. An earlier investigation by Scorpio confirmed Makwakwa lived far beyond his means – he spent as much as three times more per month than he legitimately received per month from SARS. A Scorpio investigation further confirmed that Makwakwa’s deceptive explanations could not reasonably be true or tested to verify the genesis of his mysterious blessers.

Scorpio did however establish that Monyeki accompanied Moyane and Makwakwa in November 2015 to Miami in order to attend the International Tax Stamp Forum. 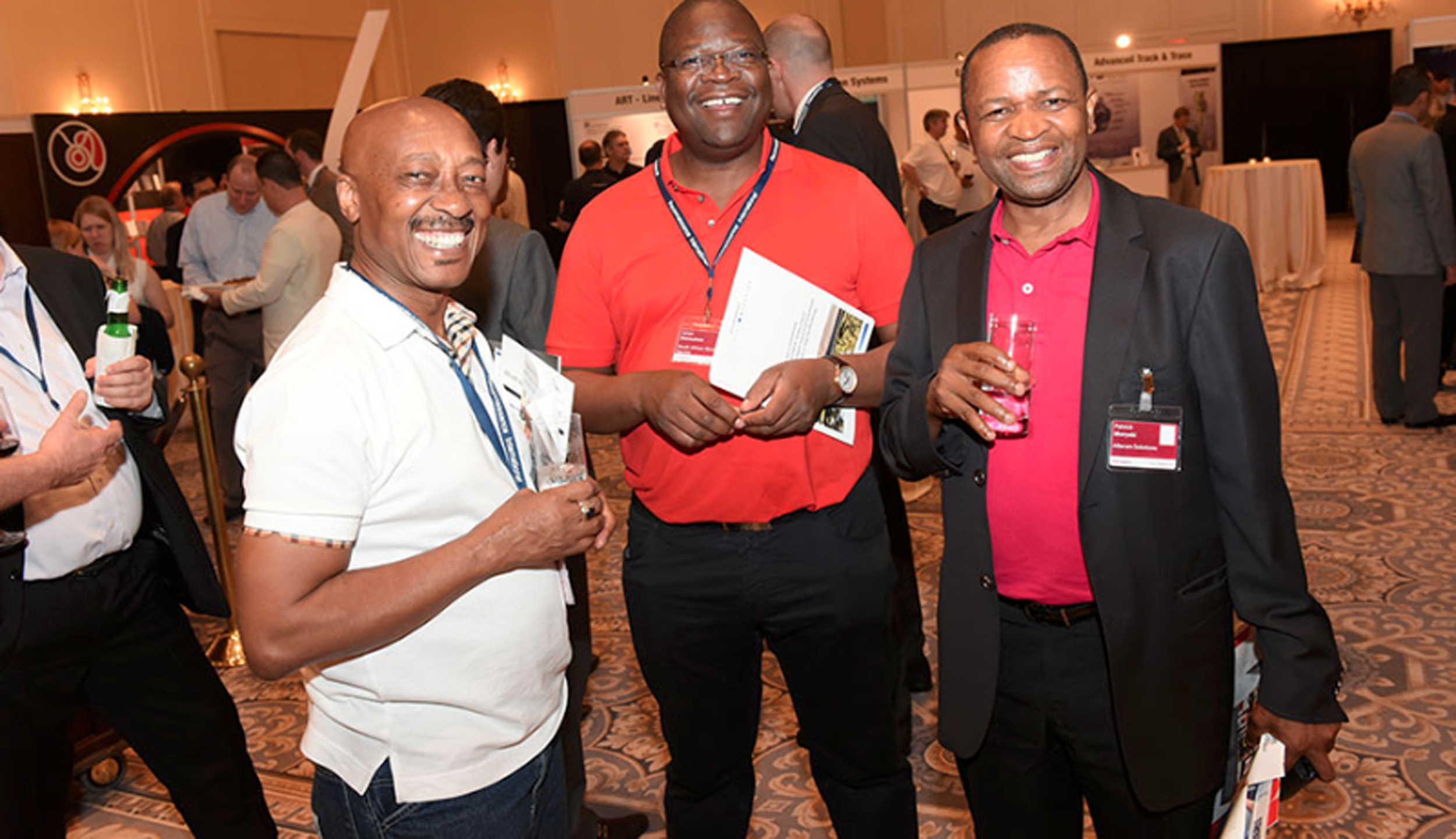 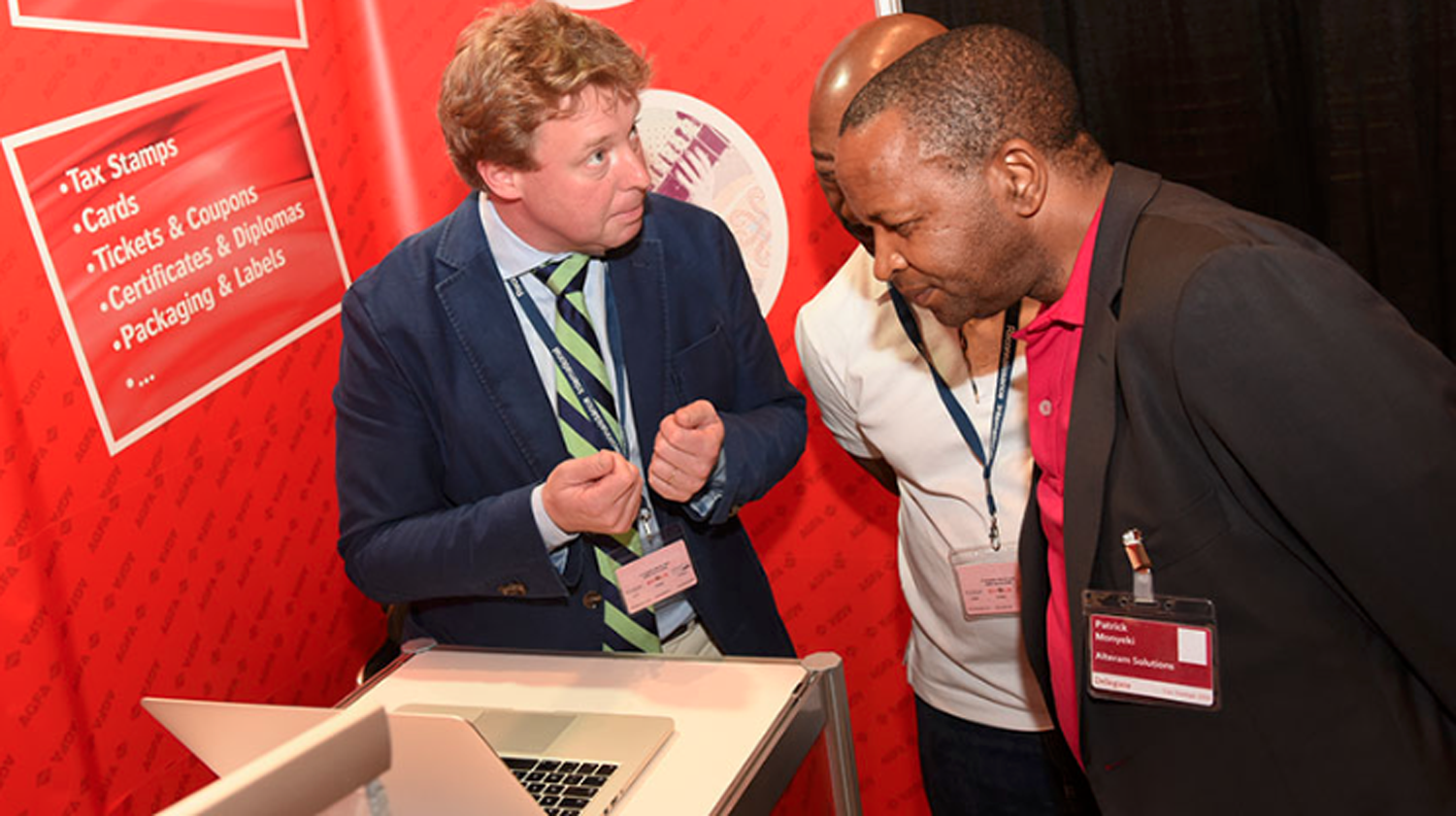 Tom Moyane and Patrick Monyeki at a stall in November 2015 at the international Tax Stamp Forum held in Miami.

The event was about holographic fiscal stamps and markers for tobacco products. It is a highly contested area, and extremely lucrative. Monyeki represented another of his companies, Alteram Solutions Pty (Ltd). Alteram was the only South African company attending the conference that could tender to do the required work. The tender was published early in 2018, before Moyane’s suspension in March 2018, but has been inexplicably withdrawn in the meantime. According to sources Monyeki was poised to receive the winning bid seven months after Makwakwa received R480,000 for no proper and verifiable reason through Monyeki’s companies.

Makwakwa resigned in March after Scorpio and the Sunday Times highlighted that Makwakwa signed off on a SARS debt contract to a company that formed part of the money laundering ring red-flagged by the FIC.

Moyane was suspended in the same month after Scorpio revealed he bullied his colleagues into paying out illegal VAT refunds to the Gupta companies.

Soon thereafter, a Commission of Inquiry was established to investigate administrative and governance issues at SARS – including much of what was highlighted in Scorpio’s extensive SARS investigation. On Tuesday the Commission of Inquiry into SARS will enter its fourth week of public hearings, including testimony from National Treasury on SARS’ dodgy contract to Gartner. Most notable is that Makwakwa and Moyane are still not on the list of witnesses – even though both continuously claim they want to share their true and transparent version with the public. DM