As SABC board is set to present detailed turnaround plan to Parliament, Minister Mokonyane is not helping 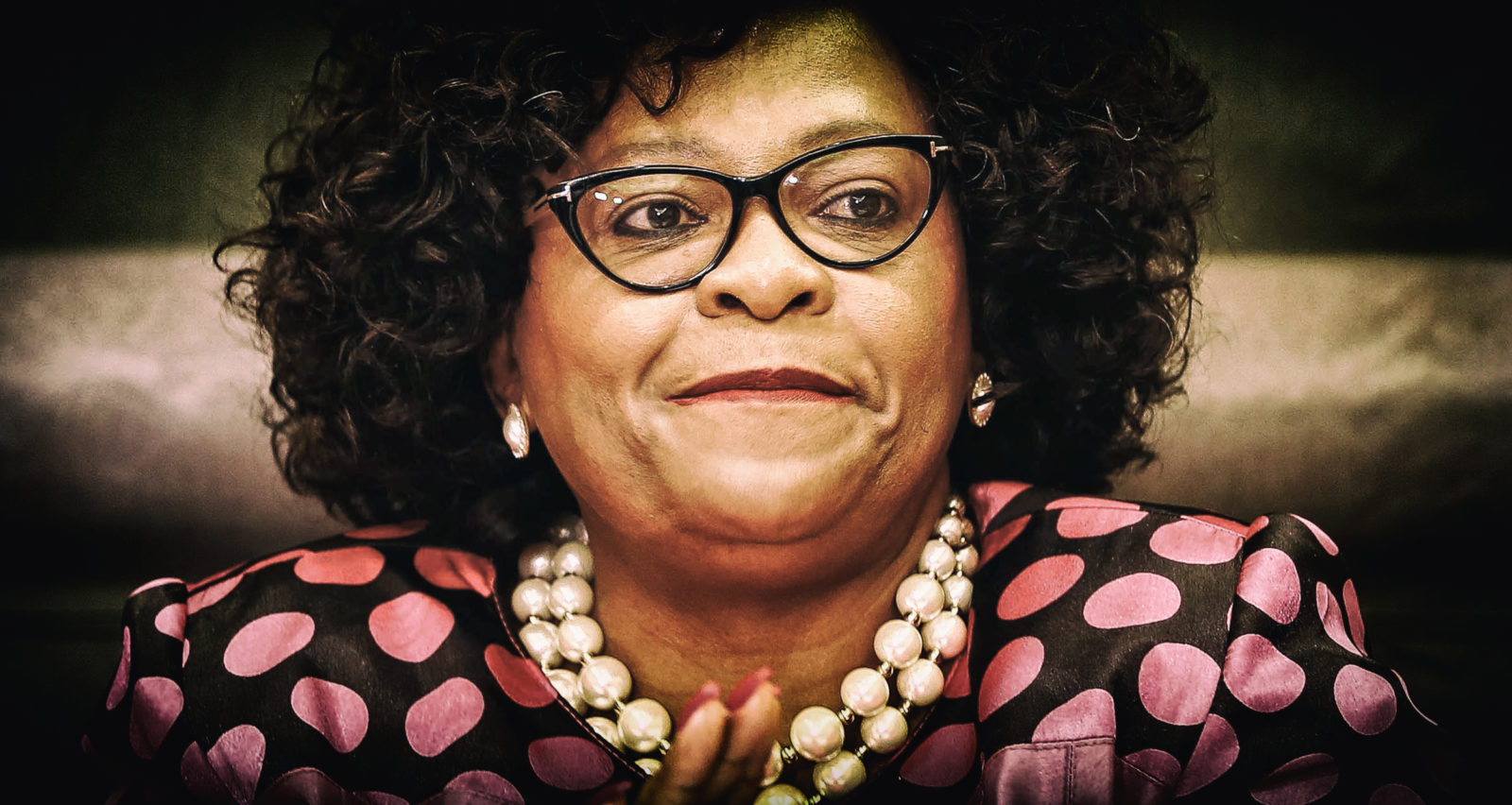 With a general election looming, it is imperative that the public broadcaster fulfill an extensive mandate and claw back its integrity and independence free from political interference in the post-Jacob Zuma/Hlaudi Motsoeneng era. The SABC is set on Tuesday to present to Parliament a detailed plan to save the public broadcaster while some in the governing party, including Minister of Communications Nomvula Mokonyane, appear to be working against the board. The battle for the soul of the public broadcaster has begun.

A few years ago at the height of Hurricane Hlaudi’s rule by whim of the public broadcaster, an industry insider, in an ungenerous moment of extreme pique, suggested that the only way the SABC could be fixed was to “blow it up”.

With enough time, free rein and the blessing of former communications minister Faith Muthambi and various others higher up the political food chain, Hlaudi Motsoeneng metaphorically did just that – destroyed the SABC.

The deep fiscal hole that the public broadcaster now finds itself in is, in a way, a Ground Zero, courtesy of Motsoeneng and his dizzy acolytes and enablers.

On Friday the former Anointed One lost his bid to pucker the hot-seat again when the CCMA ruled in favour of the SABC. Motsoeneng had attempted to be reappointed as group executive of corporate affairs, a position from which he was dismissed.

The board lost no time after the ruling issuing a statement saying the decision “vindicated SABC processes as procedurally and substantively fair”.

“This is testimony of the effectiveness of the strategies that the SABC is embarking on to restore the credibility and integrity of the corporation,” said Neo Momodu, SABC spokesperson, after the ruling.

The statement went further, reiterating that the SABC remained “committed to enforcing sound governance procedures aimed at re-establishing a culture of accountability within the public broadcaster”.

These are trying times, but since its appointment in October 2017, the new board, chaired by Bongumusa Makhathini, quickly appointed a competent executive including Chris Maroleng as COO (Hlaudi’s old job), Madoda Mxakwe as Group Chief Executive Officer and Yolande van Biljon as Chief Financial Officer.

This following a 2017 Pretoria High Court ruling by Judge Elias Matojane affirming the independence of the SABC board. Mokonyane appealed the judgment and lost.

On 2 September 2018 Mokonyane withdrew the controversial Broadcasting Amendment Bill, one of former Minster Faith Muthambi’s babies, which would have given the communications minister the power to appoint the SABC board, removing this authority from Parliament. Muthambi’s bill also would have seen the reduction of the non-executive directors on the board from 12 to nine.

In the meantime the SABC has installed a strong board (with three vacancies to fill urgently), has received no guarantees from National Treasury, has been saddled with a wage bill of R3.1-billion a year, losses tallying R622-million and an albatross of R1.3-billion in debt.

And, as if this were not enough to occupy the new regime at Auckland Park, the executive and the board now have to deal with Mokonyane criticising the SABC’s plan to cut its bloated jobs bill.

Mokonyane told the Sunday Times that “[Because of] how people related with the minister in the past, people [the board] still believe that they can then act on what the court has ruled and not on what their mandate is”.

It appears Mokonyane has a differing view of the executive powers section 13 (11) of the Broadcasting Act of 1999 bestows on the board including how the public broadcaster operates its business and conducts labour relations with employees.

ANC Secretary-General Ace Magashule was the first in fact to politic around the retrenchments, telling a meeting in Limpopo, “We must support the workers of the SABC. The ANC, we committed ourselves publicly… that we must not allow any retrenchments, even in our SoEs (State-owned enterprises).”

At the weekend, Zingiswa Losi, newly elected Cosatu president, blamed corruption, poor leadership and State Capture for conditions that have led to imminent job cuts at the SABC.

“It’s because of the massive corruption that has taken place at the SABC that people created jobs that never existed because they wanted people who are going to drive their own, narrow and selfish agenda of accumulation at the expense of workers,” Losi reportedly said.

Losi’s position is significant, considering Mokonyane’s accusation late last week that the board had turned down help from her department as well as National Treasury with regard to avoiding some 800 retrenchments. Mokonyane also accused the board of behaving “as if it could fix the SABC alone”.

Mokonyane told the Sunday Times that she had convinced Minister of Finance, Nhlanhla Nene, to put together a team of Treasury officials “to assist the SABC”, but this had “met with resistance”.

The dog whistle politics surrounding that statement is that the minister essentially does not seem to trust the new executive to come up with a rescue plan by itself.

“Treasury has a turnaround team that can look at the financials and advise. That’s what we are saying … bring everything, whatever you have done, bring it to Treasury and to us. Let us work together and look at all permutations so that then we are given options,” Mokonyane said, adding that the SABC needed to provide “options, that we tried this, this did not work … And that team is ready and waiting for this kind of collaboration.”

This is hugely ironic considering that almost a year ago the SABC requested Treasury to provide it with guarantees which would in turn allow it to secure loans from commercial banks. Unlike SAA, with its constant bailouts and which will continue as a loss-making enterprise, the SABC has been left to find a solution on its own.

Claiming at this late stage that the minister and Treasury have a different plan most certainly is aimed at undermining the work of the board.

Speculation is that the SABC needs a guarantee of between R1.5 and R3-billion to pay off an approximately R700-million creditors’ debt and provide enough cash to dig itself out of a deep hole.

It is believed that should the SABC successfully implement restructuring, pay off large creditors and deal with pressing regulatory constraints, it could break even within 18 and 24 months.

The demise of the SABC not only would affect the millions of South Africans who rely on the public broadcaster to stay informed but also the livelihoods of independent producers, writers, actors, facilitating houses, and sports associations, to name only a few who orbit it. (Including the industry insider who suggested the SABC be blown to smithereens and built up again from scratch).

At the weekend it emerged that the ghost of King Hlaudi appears to be alive and well after a Phalaphala FM radio DJ (who asked not to be identified) exposed that SABC staff had been banned from reporting on or speaking about the crisis and corruption at VBS bank.

City Press reported that it has seen a letter from SABC human resources which threatened to take action against Broadcasting, Electronic, Media & Allied Workers’ Union shop steward, Tshililo Khanari, after a July Facebook post regarding the provincial working committee of the ANC response over the VBS matter and further expressing views regarding Khosi Khulu Toni Mphephu Ramabulana in relation to the failed bank.

The DJ has accused members of the station management team of having business links to the bank, Vhavenda King Toni Mphephu Ramabulana as well as the Vhembe District Municipality in Limpopo.

The presentation to Parliament’s Communications Portfolio Committee on Tuesday will, Daily Maverick has learned, prove that retrenchments are only one of several plans and that it has the requisite financial and human resources skills to accomplish the turnaround. Mokonyane, said one insider, was aware of these plans.

Ironically, again, the condition of a previous guarantee from National Treasury six years ago to the public broadcaster was that its bloated workforce had to be slashed.

But that was then, when President Zuma commanded the dizzy heights. This is now, post ad hoc committee of inquiry on the SABC board, the exit of Hlaudi, Muthambi and others, the court ruling and a current Ramaphosa presidency.

The delay in appointing members to the three vacant positions on the board appears also to be due to the lack of a sense of urgency by the Communications Committee, chaired by the ANC’s Comely Maxegwana. It is one of the committee’s key responsibilities and competencies.

The board needs a quorum of nine. With one withdrawal (Nomvuyiso Batyi), three resignations, including that in July this year of Victor Rambau, the board can quorate with eight members plus three executive directors. Rambau’s term comes to an end at the end of October. If the appointments are not made soon the board could soon be hobbled.

Prior to Rambau’s resignation board member Rachel Kalidass resigned in November 2017 followed by deputy board chair, Febe Potgieter-Gqubule in December to take up a post at Luthuli house.

The portfolio committee invited nominations for replacement board members in May 2018 and, while it has received over 80 nominations, appears to have done little to expedite appointments. The committee has claimed a “pattern” existed and that it needed to look into this but this line of thought has been vehemently denied.

The battle for the soul of the public broadcaster has begun but there are many still in the corridors and outside who view the SABC not as an impartial and independent service to the citizens and electorate of South Africa but as a propaganda machine for the ruling party.

It is a notion embedded in the DNA of the SABC under years of National Party/ white minority rule. It is a cycle and sense of illegal entitlement that has wreaked havoc in concentric circles emanating outwards from Auckland Park, between a few bright beams of light that arrived in the early post-apartheid decade.

Can this board and executive stay the course, ward off determined political interference to create a world-class public broadcaster that serves the people?

Tuesday is crunch day for the board who will be arriving well prepared and not cowed. DM