‘Gentrification is a modern word for the Group Areas Act’ 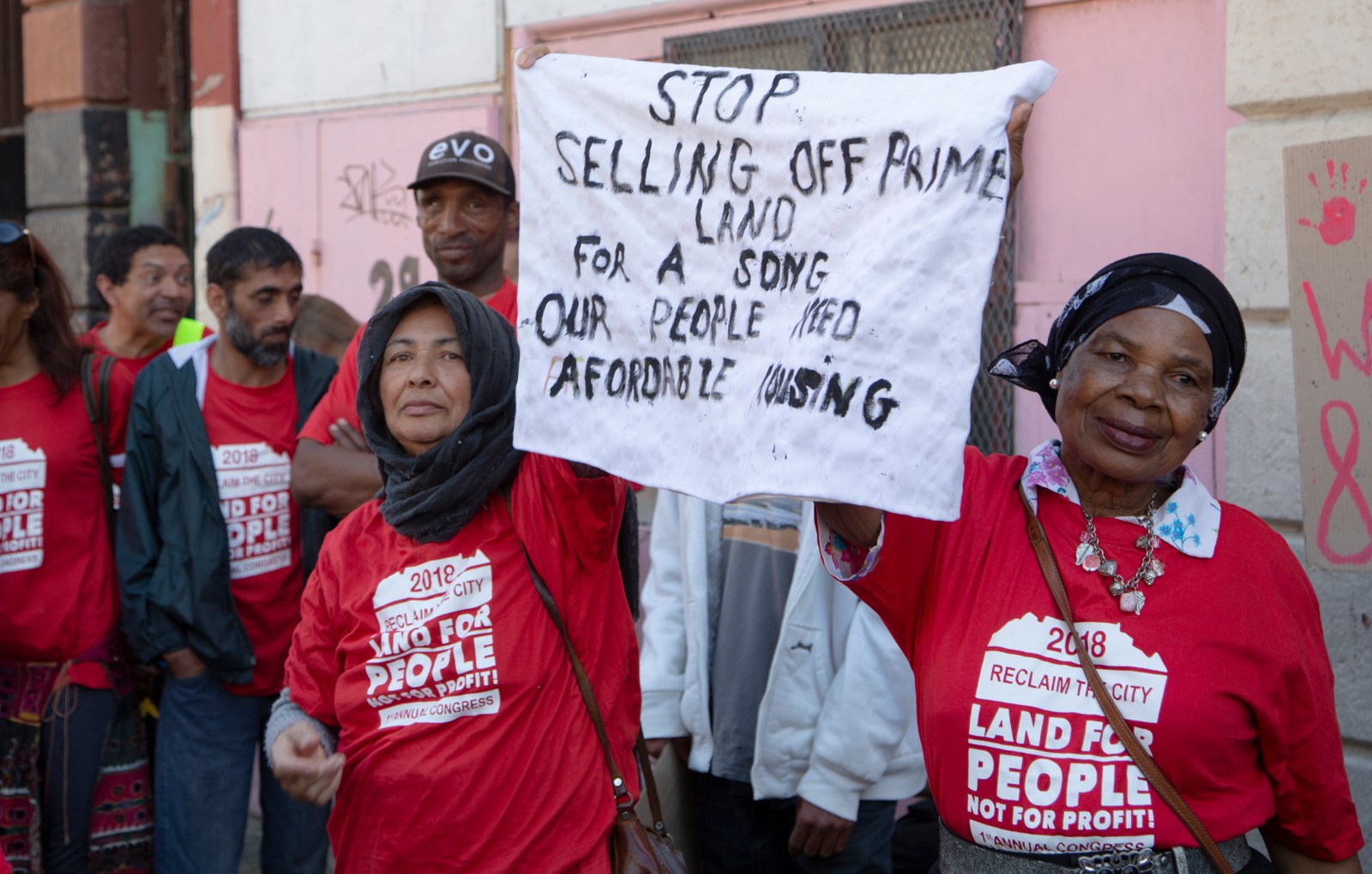 Members of housing rights NGO Reclaim the City walked through the streets of Woodstock on Heritage Day, 24 September 2018. Many of those who joined in are former residents who were evicted from the community due to rising property prices. Photo: Leila Dougan

On Heritage Day, a few dozen people took part in a “memory walk” through the streets of Woodstock. Many of them had lived in the community before being evicted, or are now facing being forced out due to gentrification.

Housing rights activists from Reclaim the City organised a “memory walk” through Woodstock, from the infamous Gympie Street to the Salt River community hall, stopping at various points to listen to those who had been evicted from properties.

Toedieda Adams is 70 years old and lived in Gympie Street for almost four decades before being evicted. Even though many believe it was a dangerous place, she said it was a good place to live and raise a family.

“Families and friends live there, it was very nice to stay there. When they evicted us our flat was demolished and our stuff was thrown out,” said Adams.

As a child, Adams lived in Primrose Street in District Six. She and her family were forcibly removed under the Group Areas Act of 1950, and she said the trauma of the forced removal and the Woodstock eviction still affects her. She managed to find another rental in Woodstock but struggles to pay the bills. She needs to cough up R10,000 monthly and her water and electricity is often shut off.

Maxine White said that rent in Woodstock has become unaffordable.

“It’s very sad, it’s a loss for us. We are going homeless because we can’t afford the rent,” said White.

Noenyah Adams is afraid that she will soon be evicted from her home in Woodstock. She says it is merely a matter of time before an eviction order is slipped under her door.

“We can’t afford to live here any more,” said Adams.

“I’m staying in Woodstock in a rented property; it costs me R5,500 but I don’t even earn R5,500 per month. Which means soon I will also be one of these people.”

Adams is the only breadwinner in the family. She earns R4,000 and her father and mother contribute to the rent from their pension.

“We’re going to end up evicted soon because we can’t keep up with the rent money,” she said.

Leslie Stoffberg walked through Woodstock carrying his four-year-old daughter, Amber, on his shoulders. Stoffberg was born in Woodstock in 1962 but when the house he and his family lived in was sold, they were evicted.

“In Woodstock, you’re close to everything. Growing up there was crime but you could decide to stay away from that. Even back then we had gangsterism, but they would never interfere with us, it’s not like all of these shootings and killings that happen out there today,” he said.

Karen Hendricks is facing eviction from a house in Cavendish Street in Woodstock.

“I grew up in this area, I spent a large part of my childhood here,” she said.

Hendricks said residents who have faced eviction must “fight for existence” and that on Heritage Day, those marching had nothing to celebrate.

“Gentrification is displacing our people. People are being pushed to live in relocation camps, but that is not our heritage. Woodstock is our heritage and we have every right to be here today. Why is it that to the [City of Cape Town] and government we don’t exist?” said Hendricks.

“Private developers have been gentrifying our homes. Gentrification is only a modern word for the Group Areas Act, and we are going to stop that now. Where people live should matter, it should matter to the City,” said Hendricks. DM

See a special feature here: Gentrification victims: The Dreyer family’s struggle to keep a roof over their head – under a city bridge