The war drums on the horizon beat for Ace Magashule 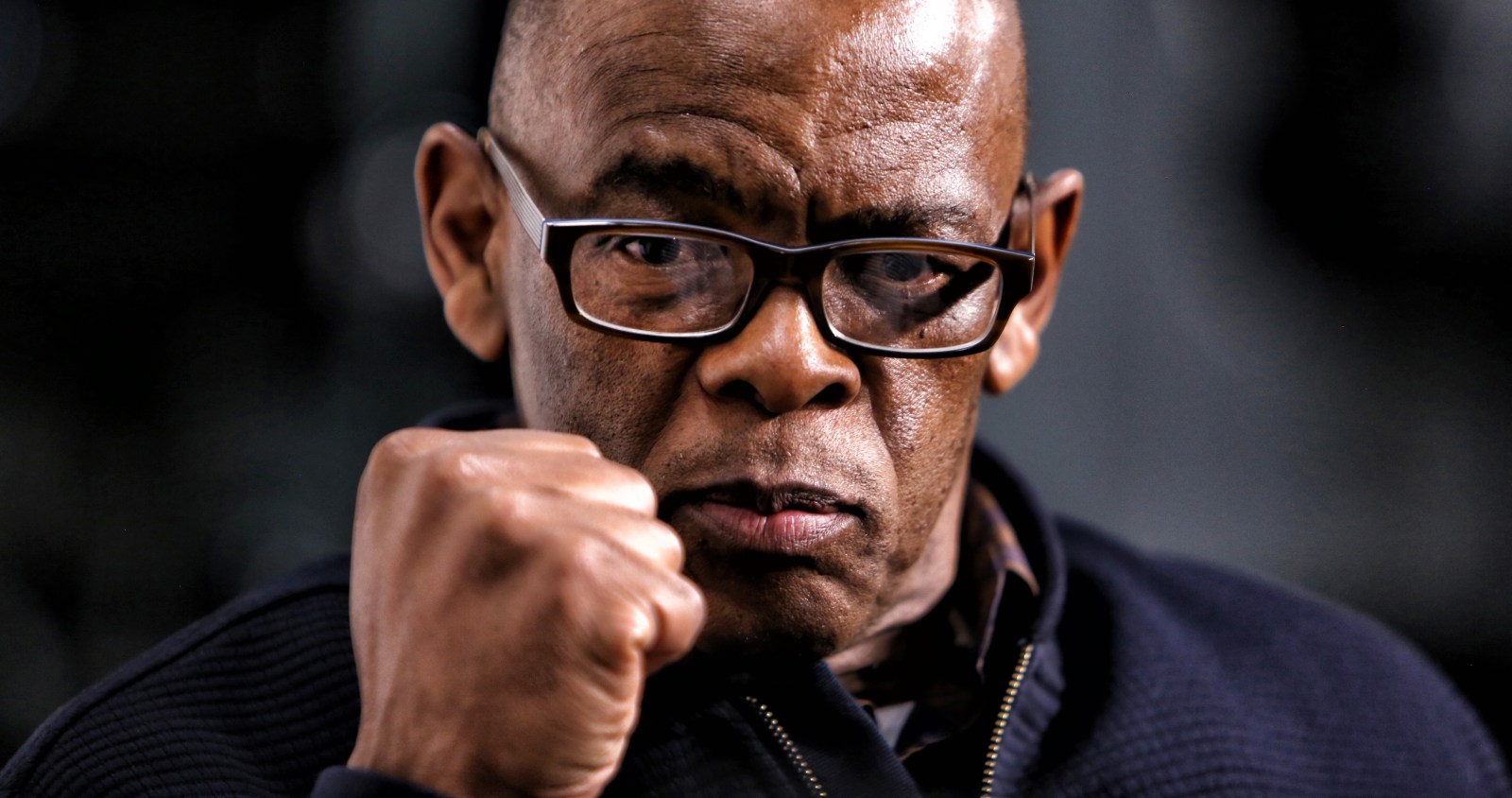 After the strange divided result that was the ANC’s Nasrec election, it was common cause among most of the chatterati that the body of the Top Six national leaders was unstable and therefore unsustainable. Also, it seemed from the first minute that Ace Magashule looked particularly vulnerable in his new role as the party’s secretary-general. Fast-forward to now. After several developments following that meeting with former president Jacob Zuma and others, it appears a process of dispatching Ace may be under way more quickly than previously thought. And while the ANC is still difficult to predict, it does appear that Magashule is under more pressure than any previous secretary-general of the party since 1994.

The developments following the revelation that Ace Magashule had been meeting with Zuma and others have come thick and fast. There was the ritual of denial, coupled with the cries of “Fake News”, followed by the awkward admission and even stranger explanation. (Any news of an apology by the Women’s League and the ANC itself to the Sunday Times’ Qaanitah Hunter and Jeff Wicks for calling them many shades of evil for reporting on the meeting? – Ed)

But this week marked the possible start of the narrative designed to remove Magashule, or at least remove the remaining political legitimacy he still has, if any. The setting for this week’s developments has been the Cosatu Congress. This is safe political turf for Magashule’s opponents – President Cyril Ramaphosa was one of the federation’s founders. More than that, he perhaps represents part of the urban base of the ANC, in relation to the provincial strongmen that Magashule may represent.

On Monday, Ramaphosa made possibly the strongest political speech of his recent career. He started by making this point:

“If there is going to be any plot, it must be a plot to defeat poverty, that must be the type of plot we want.”

“Plot”, of course, is a loaded word. The delegates would have known immediately what he meant. The wonderful phrase, “Let us invest our energies into transforming the economy and (not) waste our time playing marbles with the hopes of our people…” is the kind of line that automatically goes into the “Quote of the Day” feature in every daily email newsletter that counts.

Then Ramaphosa made a bigger point:

This is important, because he is appealing not just to leaders of the ANC, but also to members. He is assuming the title of the person who is representing members in this. It is an appeal not just to those in the hall, but to branch members across the country.

There was also, unusually for Ramaphosa, what could be described as war talk:

“Because our people are on a march, they are on a revolutionary march to go and win those elections. Just imagine we are going to war, and then we start fighting amongst ourselves and we take guns and start shooting each other. What kind of army are we?”

In other words, if the internal problems are not sorted out soon, there will be a very real impact on how the ANC does in the elections. This comment provides a case for urgency, it gives people a reason to act on this now.

Then came perhaps the kicker, what for the ANC is incredibly strong language:

“Those who will get into acts actions that disunited our people, divide our people, must be exposed. They must be exposed so that we know them. We cannot afford to do this. And then you have to ask yourselves, those who want to divide the ANC, what agenda are they serving, what mandate are they serving… If they are working to divide the ANC, tell us what your agenda is, we cannot accept this.”

In short, he is calling out Magashule and others. The choice of words here may be important too. There have been persistent reports that Zuma and other are contemplating attempting to damage the ANC in the elections to weaken Ramaphosa, either through forming a new political party, or some other means. Ramaphosa may be hinting at those reports, or at other developments he is aware of.

On Tuesday, also at the Cosatu Congress, the SACP leader Blade Nzimande continued the attack. He made the claim that “the attack on Ramaphosa is an attack… on all South Africans”. He suggested that in particular it was an attack on the working class and the poor. Nzimande appears to be broadening the scope of the attack, and while not necessarily appealing to voters, is suggesting that the situation is serious.

Ramaphosa’s and Nzimande’s speeches, taken together, did mark a start of a combative narrative. On Monday, the ANC’s national working committee did meet, after Ramaphosa’s speech to Cosatu. The body’s agendas and discussions are not generally made public, but it does appear that there was no discussion about Magashule. However, the ANC has confirmed that there will be another meeting of the NWC on Tuesday 25 September, after the public holiday weekend. It may turn out to be a meeting at which action against Magashule will be taken.

The time management is important, too. By giving the situation a few days to develop, more senior leaders of the ANC join Ramaphosa and Nzimande in speaking publicly, through whichever code they chose, against Magashule.

Deputy President David Mabuza is no fan of Magashule, having once strongly criticised him in public in the National Assembly. Mabuza may well be the next person to speak. There are, of course, the others too. Chief Whip Jackson Mthembu has already said the ANC’s national executive committee should deal with Magashule urgently, while some provincial leaders may also start to raise their head above the parapet.

Still, the time period in which Ramaphosa can move is severely limited. He surely would not want to go into the 2019 election with Magashule in office. The ANC’s election campaign is likely to be launched in earnest with its January 8th Statement in 2019. As a result, December may well be the deadline for any final action against the secretary-general. Taking such a strong stance right now may just give them enough time to complete the task.

However, it should not be forgotten that Magashule is not on his own. Pictures from Ramaphosa’s address show Magashule sitting with the ANC’s deputy secretary general Jessie Duarte and Communications Minister Nomvula Mokonyane. Reports from the congress suggest that they did not rise with the rest of the hall to applaud Ramaphosa, but only left their seats when they spotted photographers moving in. The size of the residual power wielded by Zuma will still be an important factor.

The net impact of Ramaphosa’s upping of the ante in this way may be to force his opponents’ hand, to push them into acting before their plans are properly ready. In other words, they will either have to attack, or take what is coming to them. Having said that, it is difficult to see what they can actually do. There are branches and regions in the Zuma/Magashule cohort, and at least one province they control. But that may not be enough to actually fight back.

It should also not be forgotten that there are unexpected developments that cannot be logically foreseen from this vantage point. The NEC itself may not have the legal power to actually remove Magashule, as he was elected by members at a conference. It could also be that he is able to mount a strong fightback. For Zuma himself, this could be the last throw of the dice. Should Magashule be removed, Zuma and his followers would have no major positions at their disposal (while Duarte may have to act as secretary-general, it seems unlikely she would have the legitimacy to cause problems). Zuma & Co may have every interest in drawing this out for as long as possible.

Some of what is happening in the ANC was surely always predictable. If Zuma lost at Nasrec, he was always going to manoeuvre against Ramaphosa. And Magashule was always going to be involved in it. The question now is whether the commentariat’s predictions immediately after Nasrec will turn out to be true and Magashule’s shot at the national stage indeed turns out to be a short one, marred by his bad faith and even worse incompetence. DM