SABC job cuts: Lest we forget – the ANC fiddled while Hlaudi was burning the national broadcaster 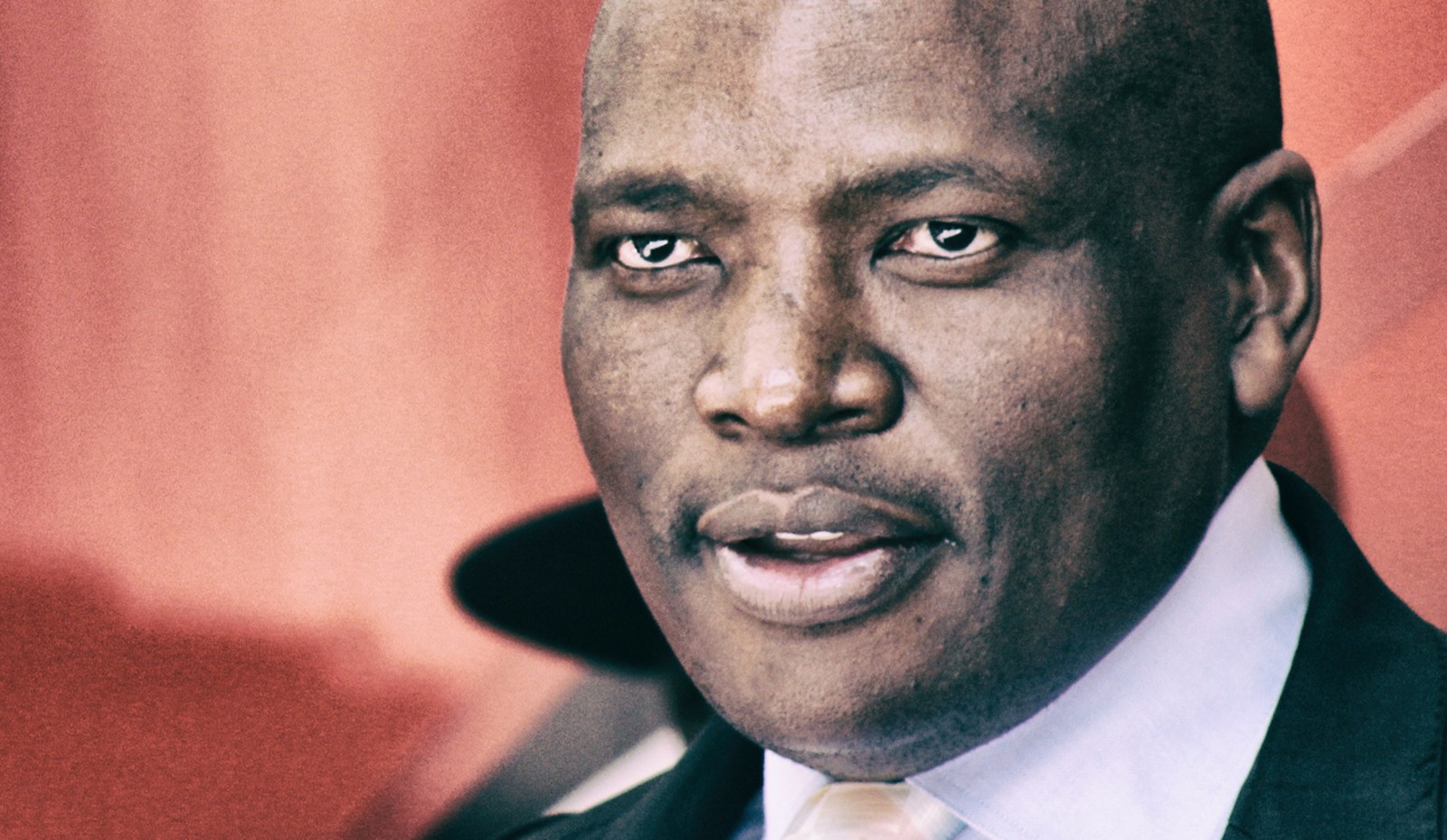 The insistence by ANC Secretary-General Ace Magashule as well as Minister of Communications, Nomvula Mokonyane, that the financially hobbled SABC hold back on job cuts is beyond satire.

“All great events and personalities in world history reappear… The first time as tragedy, the second as farce.”

For around two decades the governing party, through various ministers of communications, non-existent parliamentary oversight and a board stacked with sweetheart chairs and members, aided and abetted gross mismanagement and the flouting of laws of good governance at the public broadcaster.

The workers have the ANC to blame for SABC’s financial trouble and not the board.

It was the ANC who birthed and raised, at the great teat of patronage, former disgraced SABC COO Hlaudi Motsoeneng.

In other words, the usual suspects.

Various hand-picked board chairs too, including Motsoeneng’s most vocal groupie, Ellen Tshabalala (chair from 2013 to 2015 and who, it was later found, had also faked her qualifications), Ben Ngubane (January 2010 to March 2013), and Mbulaheni Maguvhe (2015-2017) all colluded to entrench and encourage Motsoeneng’s unbridled abuse of power at the expense of the public purse.

Even after former Public Protector Thuli Madonsela’s stinging recommendations in her 2014 report, When Governance and Ethics Fail, which exposed systemic corporate governance failures at the SABC under Motsoeneng’s watch, he was still appointed to the top job.

The Farce About Ace (with a nod to Pieter-Dirk Uys) is not only that he is the ANC’s Secretary-General who attends unscheduled meetings at the Maharani Hotel, but also that he was first out of the blocks to condemn the SABC board announcement that the public broadcaster needed to cut its bloated R3.1-billion per annum wage bill after reported losses of R622-million at the end of this financial year.

The public broadcaster’s debt clocks in at R1.3-billion. In August the SABC board informed Parliament’s communications committee that as at 15 August‚ the broadcaster owed its creditors R694-million, with further accruals of R475-million — with only R26-million in the bank at the end of that month.

It was in the Free State that Motsoeneng was to launch his career, eventually moving from stringer in the old Qwa Qwa to Bloemfontein before capturing the public broadcaster as CEO, summarily firing staff, paying himself a bonus of R11-million in 2016, and insisting on “sunshine journalism”, all while systematically mismanaging the entity and causing chaos in his wake.

Motsoeneng got away with it also because of non-existent parliamentary and regulatory oversight, a situation the South African Editor’s Forum (SANEF) has described as “a dark period”.

Nothing, it seems, stood in the path the ANC had paved for Motsoeneng. Until it all imploded as later revealed to audible gasps at Parliament’s ad hoc committee of inquiry into the SABC board and instituted in November 2016.

Magashule, after the announcement of proposed staff cuts, issued a public statement threatening the new board, saying that “the ANC has taken a decision and I am talking on behalf of the President that we must not allow any retrenchments even in our SoEs same with the SABC.. we should not allow people to be retrenched”.

Old habits, particularly in the ANC, die hard, however, especially after years of growing accustomed to treating SoEs as party feeding troughs.

The SABC board hit back immediately, informing Magashule that it noted “with concern” the SG and the ANC’s statement but gently pointing out that the Board, in case Magashule or the ANC might not be aware, had executive power in terms of section 13(11) of the Broadcasting Act, 1999 to “control the affairs of the Corporation”.

“This includes how the SABC operates the business of the public broadcaster and conducts labour relations with its employees,” said SABC spokesperson Neo Modumo.

Meanwhile, the South African Editor’s Forum also hit back in a statement saying the “cruelty” of the situation is that workers would be at the receiving end of years of leadership abuse and negligence.

The new SABC board quickly revealed its independence, refusing to be intimidated or played by politicians, as early as in January 2018 when it was revealed by Daily Maverick that GCIS, through Minister of Social Development Bathabile Dlaimini’s spokesperson, Lumka Oliphant, had paid the SABC R149,000 for an “interview” with the then minister on Anele Mdoda’s SABC3 show Real Talk with Anele.

Immediately afterwards the SABC board issued a statement slamming the deal and saying that charging for interviews was “a breach of organisation practice”.

“We do not solicit sponsorships for programmes where it is part of a marketing campaign to communicate a departmental or client programmes or policies,” the SABC said at the time.

Fast forward to the current dispute: After the board had stood its ground in the face of Magashule’s statement, Communications Minister Nomvula Mokonyane weighed in, saying the SABC had “ignored the department’s advice despite several meetings”.

“As the shareholder, it is our considered view that any retrenchment exercise must be a last resort and an integral part of a holistic, well formulated and broadly canvassed turn-around plan aimed at steering the SABC towards future financial sustainability,” Mokonyane said in a statement.

She expressed concern that the SABC’s turn-around strategy – including proposed plans to shut down offices in regions and retrenchments – lacked detail with regard to how else it would raise cash and cut costs.

“The SABC is a national asset and as a public broadcaster its well-being is not the exclusive domain of the board and its management, but that of all stakeholders with an interest in its sustainability,” she said.

William Bird, director of the Media Monitoring Africa (MMA), said the board was correct to push back against Magashule and the ANC’s statement and that the minister’s response could be viewed as a backlash against the Board’s standing its ground.

“There are too may assertions in her statement that are simply untrue and require urgent correction,” read a joint statement.

While Mokonyane claimed that the SABC board had ignored the “advice and support of the shareholder”, she seemed to have forgotten, said SOS and MMA, that it was Treasury who had insisted on the retrenchments as a condition of a previous bailout, which had not been complied with.

“Her statement that the Board has ‘insisted in retrenchment as the foremost and only solution’ is simply untrue. The SABC made comprehensive public proposals on its turn-around strategy which addresses a range of issues and not just staff numbers as was discussed at a Department of Communications Colloquium on Public Broadcasting just last week,” said the statement.

“The statement represents a shocking and unlawful attempt to position the minister, once again, to be able to interfere in the management of the SABC’s affairs under the guise of being ‘the shareholder representative’.”

Losing one’s job in the middle of a punishing economic recession is a frightening and awful prospect in the country where one salary often supports several people. Fighting for the rights of the workers at the SABC who are about to be retrenched is a job for the unions not the ANC, which is fully responsible for the problem and chaos in the first place.

MMA and SOS questioned the bona fides of “those who claim to care about retrenchments at this time, having stood by silently when the SABC engaged in reckless hiring and salary inflation during the term of the previous Board and management constitution fruitless and wasteful expenditure”.

Mokonyane’s statement, said MMA and SOS, appeared to be “a cheap electioneering ploy to shield the ruling party from the consequences of its disastrous interference in the SABC Board and management matters over the past decade”.

Meanwhile, the findings of two inquiries instituted by the SABC, one into editorial interference and another on sexual harassment, are rumoured to be explosive and expected to result in criminal prosecutions.

Announcing the two commissions, Acting CEO Nomsa Philiso said that the broadcaster was hoping, once the inquiries had been completed, that it would be able to claim that “we have cleansed the first layer of the people issues. We are under no illusions that we have a lot issues”.

In August 2014 the wood-panelled Court Nine at the Cape High Court was fully loaded as five silks (senior counsel) and 11 advocates packed the benches to present arguments in the Democratic Alliance’s application for an urgent interim interdict to have Motsoeneng suspended as COO, a position he was appointed to in July that year. At the time Muthambi had claimed that a legal firm had cleared Motsoeneng of all wrongdoing.

At the weekend it was revealed that former President Zuma had allegedly pressured Gavin Watson’s Bosasa – African Global Operations – to settle Motsoeneng’s legal costs incurred in challenging his “wrongful dismissal”.

Muthambi had told Parliament in 2015 that Motsoeneng’s hefty legal bill would be paid by “insurance” taken out by the broadcaster.

The Easter Bunny is real. Truth is not the truth. Etc. DM