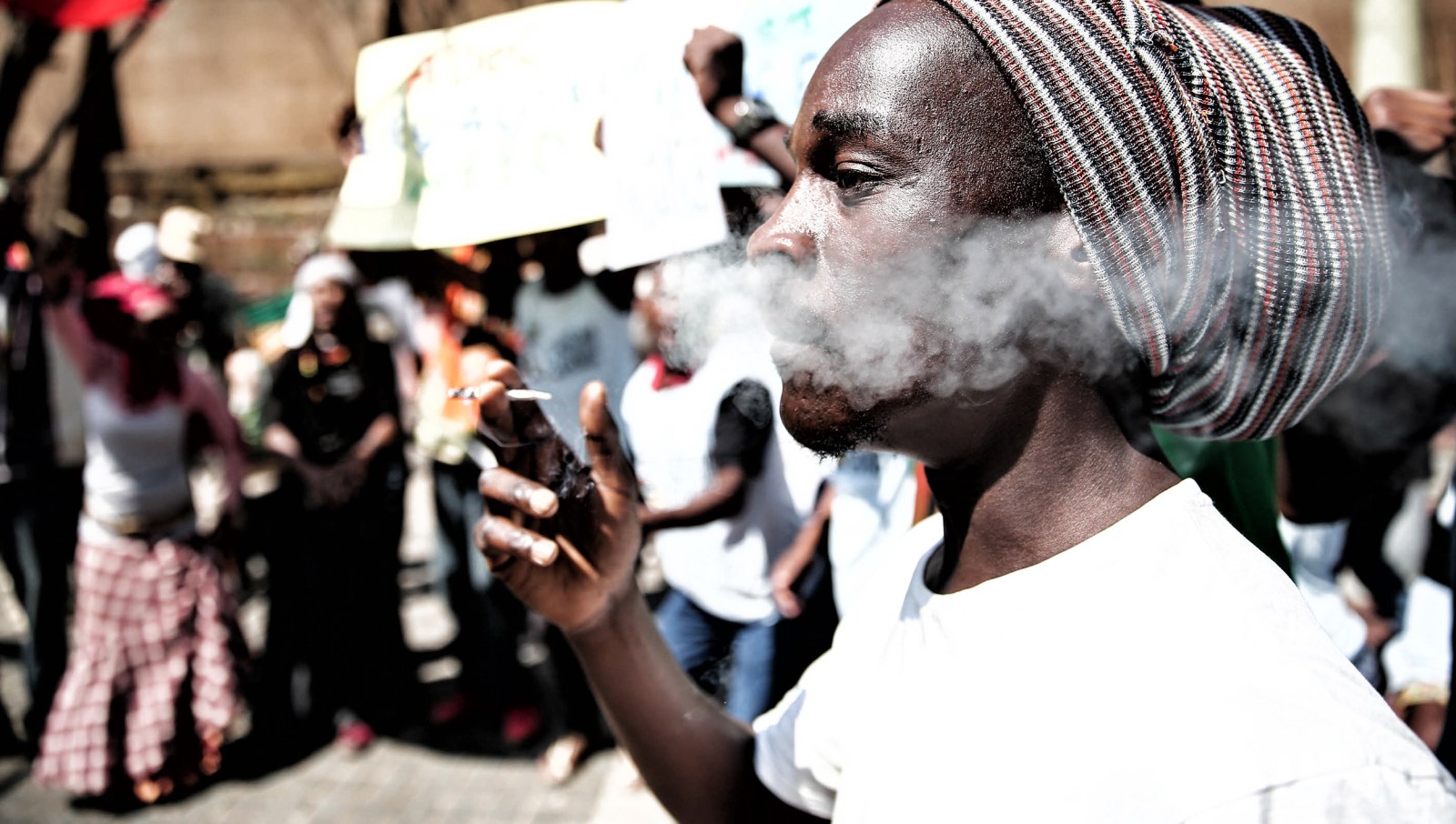 Members of the Rastafarian community celebrate by smoking outside the Constitutional Court following a ruling that the personal use of dagga is not a criminal offence on September 18, 2018 in Johannesburg, South Africa. Photo by Gallo Images / Sowetan / Alaister Russell

On Tuesday the Constitutional Court went further than many thought it would, ruling that the possession of cannabis, for personal use, was no longer illegal. As a result, the usual identity road maps routinely taken in our public discourse are of no use any more. And some of our political parties have some navigating of their own to do.

The debate around drug policy, and what should be legal, and when, is a classic governance issue. It is about managing the reality of society and dealing with the consequences of things that human beings do. For all of that, it can also be relatively uncontroversial because it has less to do with our racialised past than most of the other issues in our society.

For those listening and watching the dagga debate there may be a strange feeling of joy. It is not because someone near them is doing that which is now legal and safe from the prying eyes of the state. Rather, it is because this debate can lack the feeling of heaviness that often accompanies so many of the other discourses in our society. This may be because, perhaps more than in many other democracies, the bulk of our debates hovers around our group and individual identities.

But dagga cuts across all that. White women in the their 60s will call in to SAfm to explain how they use it and how often, while younger black men will rejoice in the fact that it is now legal.

Meanwhile, a smattering of both black and white people will oppose the legalisation. These are often social conservatives, who share a strong middle ground on issues of tradition, sexuality, marriage and the role of elders. Some may be older medical folk who believe, strongly, that dagga has harmful effects. This obviously resonates with some religious leaders, who believe that this ruling will lead to the end of civilisation as we know it. (The world did collapse many times already: gay marriage caused the cataclysm that ended our civilisation; before that, abortion also ruined everything).

Liberalisation of dagga beautifully opens the space for high debate: when identity doesn’t matter, the quality of the argument and the evidence that is provided for it can have more space. This perhaps leads to a better quality of engagement that is not held back by the problems of the past and the continuous racialised inequality that South Africa still labours to remove.

This lack of identity politics in a social issue may well mean that there are people on both sides of the debate within both the ANC and the oppositional DA. Both parties will contain people who also strongly oppose or strongly support the ruling. This could lead to interesting internal debates, as Parliament has two years to pass proper legislation on the issue.

Perhaps there is even some room for those who agree and those who disagree to reach across the political aisle and try to create a voting bloc on this single issue. In other words, perhaps both those for, and against, in both parties will try to help one another influence their party’s position. The relationships that this builds could then be used to resolve other political disputes (though that does sound overly optimistic).

Then there are two of the other parties. The EFF wasted no time in trying to claim some sort of credit for legalisation, explaining how it had been correct all along to argue for dagga to be decriminalised. With its relatively young target market, this is to be expected.

However, the attitude of the African Christian Democratic Party is fascinating. Its leader, Reverend Kenneth Meshoe, is demanding an urgent debate in Parliament on the matter, his opposition rather vocal. It appears he may be using this as a wedge issue, to differentiate himself from the other political parties.

Meshoe’s aim may well be to attract the votes of social conservatives across the usual identity lines of our politics. In other words, to become the leading voice of all who disagree with the change.

The entire dagga debate also exposes one of the strengths of our political and judicial system. Most societies have tried to solve difficult and controversial issues through political processes.

In other words, they try to ensure that most of society agrees with what is happening most of the time. In the cases where courts have had to make decisions, the result can be that the contestation in society over the issues just continues. This is surely why abortion is so controversial in the United States, but not in most of Europe. In Europe countries went through a political process — in the US abortion was legalised by nine unelected judges.

In South Africa, our judges will make a finding that a certain law is not in line with the Constitution. They stop the wrongness from being perpetrated. But then Parliament, the politicians, take over. This means that in this case it is likely that most of society will feel any final decision is legitimate, because it has been agreed to by people they voted into power.

And there are many more questions that pop up from this ruling. While the judgment makes it clear that the possession of cannabis for personal use is no longer illegal, the rest of the dagga value chain remains in legal limbo.

On a practical basis, Parliament should probably provide regulation for its cultivation, transportation and sale. This provides scope for MPs to go further than Tuesday’s ruling. But they may also decide to step back from that, and try to comply only with the letter of the judgment.

Some of the questions to be answered are inherently complex. What amount of dagga counts as “possession” and as “dealing”? Should it be grown by anyone or should you need a licence? Is there a way to tax the entire system, should every step of the way be subject to inspection or should there be a fairly lax regime? To all these questions there are multiple possible answers, increasing the complexity of the issue.

In the meantime, there is an election to fight. The DA and the ANC will probably try to pretend that this issue does not exist; and if asked on the campaign trail their leaders will mumble platitudes about respecting the Constitutional Court. But the EFF will campaign hard for the least amount of regulation, while the ACDP will fight for the most.

But, in the end, apart from those who have been victim to police harassment over dagga possession, it seems unlikely that this will radically change society that much, not overnight.

Twenty years ago young DJs on campus radio stations could tell their audiences to “light up if you have it” and face no sanction. Dagga has been largely de facto legal anyway. But it is probably important for the law, and Parliament, to finally catch up with the reality on the ground. DM