The sangoma, the mountain and the bureaucratic mud 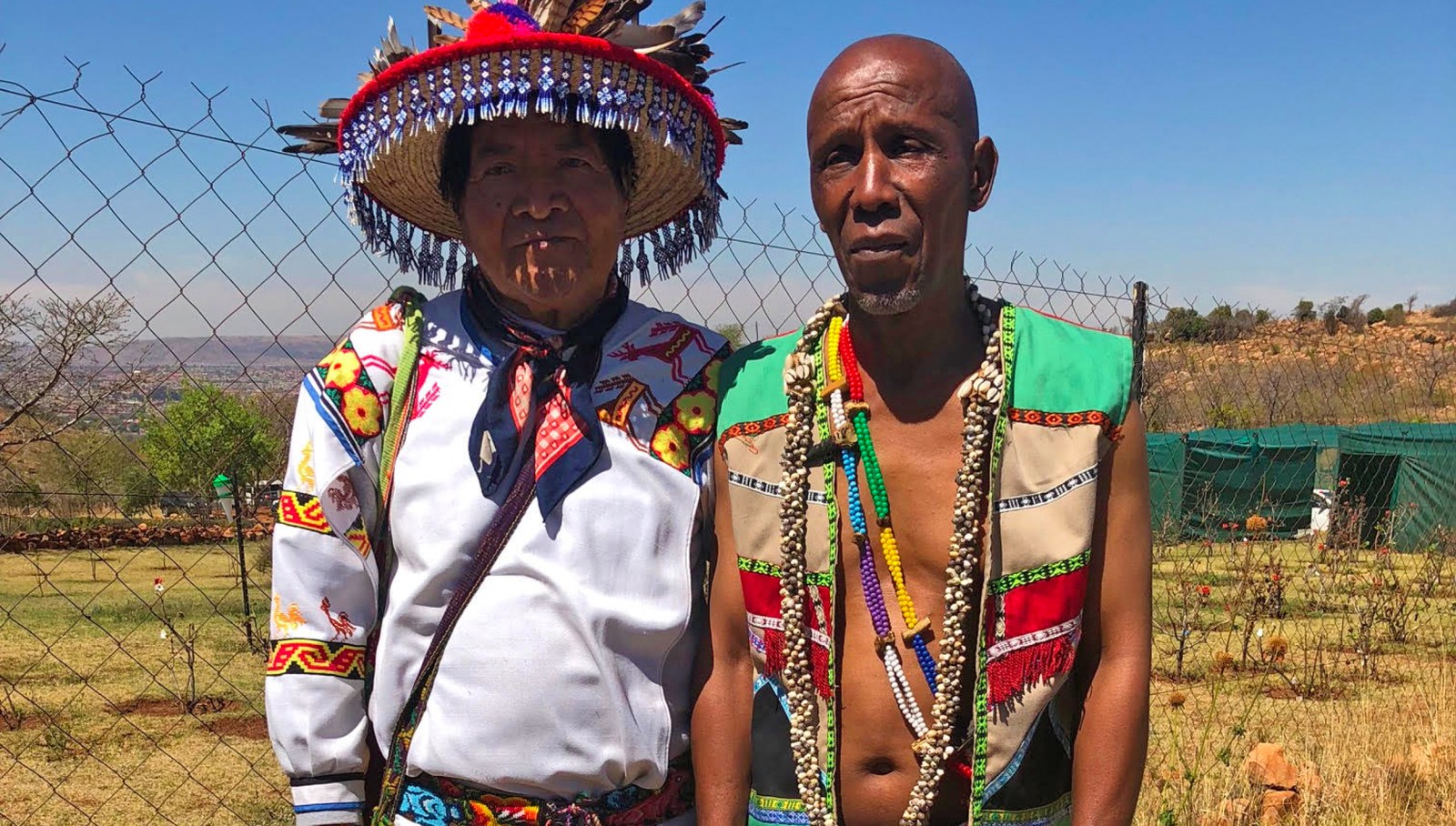 In 2001, following the call of his ancestors, Ntate Ephraim Mabena began to clear the mountain behind his house, made of enormous piles of trash. Seventeen years later, the Mothong African Heritage Trust is an environmental haven that is the pride of Mamelodi. But while it has the endorsement of the national government and three universities, the local municipality is blocking further investment. Will the ancestors come once more to Ntate Mabena’s aid?

It was the same dream, it came again and again, and it only stopped when Ntate Ephraim Mabena agreed to do what his departed grandfather asked.

The first time it came, in 2001, he was famous in these parts for other things. Back then, he was known as the founder of the local kickboxing and karate club, the man to go to if you wanted to keep your son or daughter off the streets. Others knew him as the driving force behind the Mamelodi Fencing Club, which in the late 1990s made a clean sweep of the medals at the national junior championships. A defier of the body’s limits, Mabena had also made a name for himself as an endurance runner, having once undertaken a five-day marathon to raise funds for a trip to Japan.

But on the day he responded to the call in his dream, he was stepping way beyond the physical.

“You know, it started as something I couldn’t figure out,” he explained. “It was my grandfather on my mother’s side who came to me and said, ‘You see that place on the mountain, where you used to jog and catch birds? You see where there is a dumping site?’ I said, ‘Ja’. He said, ‘Go and build a house there.’ ”

Today, that “mountain”— a pristine expanse of the Magaliesburg on the north side of Mamelodi — is known as the Mothong African Heritage Trust. At first by himself, then with his wife Mabel (who has since become a sangoma too, earning the honorific “Ma Mabena”), then with his family, Ntate Mabena cleared the mountainside of the trash that had been dumped up there for generations.

He was told in his dreams that squatters would arrive if he didn’t move fast, and so, when sure enough the squatters did come, he convinced them to go elsewhere. At one point, he found a dead body hanging from a tree, a cellphone ringing in the hapless man’s pocket. Undeterred by the murderers, rapists and thieves who performed their dark arts in the mountain’s shadows, he eventually built his house, which is now a colourful landmark in an unlikely haven where nature and the environment are sacrosanct.

Ummilo, a tree whose fruit is used to treat colds and flu; umdladlathi, which eases the pain in swollen ankle and knee joints; udodhlana, or wild dagga, which boosts the immune system and is said to be effective in the treatment of various cancers — these are just some of the indigenous healing plants that grow in Mothong’s nursery.

Below the nursery, on the south side, a sign proclaims the endorsements — garnered after Mabena and kin had done almost all the heavy lifting — of the University of Pretoria, Unisa, the Tshwane University of Technology and the national government itself, in the guise of the Department of Science and Technology. It is only the local municipality, the City of Tshwane, that is notably absent from the honour roll.

But that was something that Ntate Mabena wanted to talk about later. Right now, he had guests to attend to. Two Wixaritari shamans from Mexico, brought out by Angela Prusa of Namibia and the Sesiyakhula Njalo NPO healers of Mamelodi, led by Gogo Zandi, had come together on this Monday in September to drum and dance and pray for the healing of the land.

“It’s quite a long time that I have wanted to meet my brothers and sisters globally,” said Ntate Mabena during a ceremony that wove together a prayer matrix from the Xhosa, Swati, Zulu, Basotho, Shona, Hebrew, pagan English and Wixaritari traditions.

“When we were watching the Western-made films, you were always being defeated by the cowboys. The movie-watchers were always saying, ‘I wish these people can win.’ I want to share my tears of joy that you are now here.”

Tears, according to Ntate Mabena, that were only rendered more sweet by the years of pain. A former soldier in the elite Transvaal Machinery of Umkhonto weSizwe, he reminded us that these mountains were used as a torture site by the security police during the height of the apartheid regime. He drew a link between that regime and Donald Trump, who had typecast Mexican immigrants as criminals, and had labelled all Haitian refugees as HIV positive.

“I tell those brothers and sisters,” he said, “you are more than welcome on top of Magalies mountain.”

Later, after the sangomas had banged their drums at the sacred fire, and Don Rafael and Don’a Micaela of the Wixaritari had blessed the congregants at an old initiation site, Ntate Mabena received us at his “school of excellence” down the hill in Mamelodi. A learning institution and museum focused on indigenous African healing, it turned out to be exactly the sort of place that Western civilisation likes to snub — muthi in jars on floor-to-ceiling shelves; exhibits for “bula” sessions and other forms of divinatory consultation; a stuffed eagle on a boardroom table with its claws around the throat of a snake.

Thing was, of course, that Western civilisation hadn’t singlehandedly cleared the mountainside out back of its generational accretions of trash and murder and rape. For that reason alone — and notwithstanding the obvious fact that Western patterns of consumption had lately become synonymous with mountains of trash — Ntate Mabena remained a man deserving of his audience.

“I think you will agree with me, brothers and sisters,” he said, to the two-dozen gathered guests, “that during the apartheid time, traditional medicine was taken as nothing. I know there are still countries that deny traditional medicine practitioners their right to practice. Those who suppress us, you will feel the wrath of our ancestors. We are suffering by this oppression. We are fazed by this climate change. You know why the scientists are failing? It is because they sideline us as indigenous knowledge practitioners.”

III. The next question

By “failing,” what Ntate Mabena meant was nothing new — the world had for the last few decades been teetering on the edge of an environmental abyss, and had recently dropped into the hole. What was new, though, was the lengths to which the national government was willing to go to support his indigenous wisdom-based plan. There was only one small hitch: the City of Tshwane.

In September 2014, the Department of Science and Technology sent a “motivation for granting of land use” to the Tshwane municipal council. In the document, the department laid out how in 2007 it had established the “Indigenous Knowledge System Bioprospecting and Product Development Platform”, with bioprospecting defined as “the search for plant and animal species from which medicinal drugs and other commercially viable compounds can be obtained.”

The Mothong African Heritage Trust was flagged as a “leading organisation” in this area of research, development and innovation.

On page three of the document, under the sub-heading “Urgent Need for Land Use”, the department homed in on the one issue that has perpetually threatened to tear this country apart.

“The access to land for black farmers or organisations that play a critical role in the agriculture value chain is a main challenge.”

“Because the The Mothong African Heritage Trust programme is based in an urban location (Mamelodi East), the access to land use has proven to be a major obstacle because the tribal system (mainly rural areas) is overridden by the municipal system. The planned investments will all be in vain if the [trust] is not granted a land lease or, even better, granted the land for its own use.”

Four years later, Ntate Mabena and the department are still waiting for their answer from the City of Tshwane. In September and October 2017, the minister herself, Naledi Pandor, sent a series of letters to the relevant councillor advising that her department had concluded the required “legal advice process” for the land transfer.

Daily Maverick has been in contact with the presiding officer at the City of Tshwane, who refused to answer our questions, citing issues of “protocol”.

Given that the application for a land lease was first lodged in 2007, it has been a fight with petty bureaucracy worthy of the best absurdist theatre. Meanwhile, an R11-million plant extraction facility, fully scoped and designed, is waiting to be built at the national government’s expense.

Whether President Cyril Ramaphosa will throw his weight behind the cause remains to be seen. Either way, as proven by the work he’s already done, Ntate Mabena is unlikely to give up. He will take his cue from the tree planted on the mountain by the sangomas and the Wixaritari healers, a tree named by Don Rafael “Yura’akame”.

Its meaning? “The one that grows and blossoms.” DM