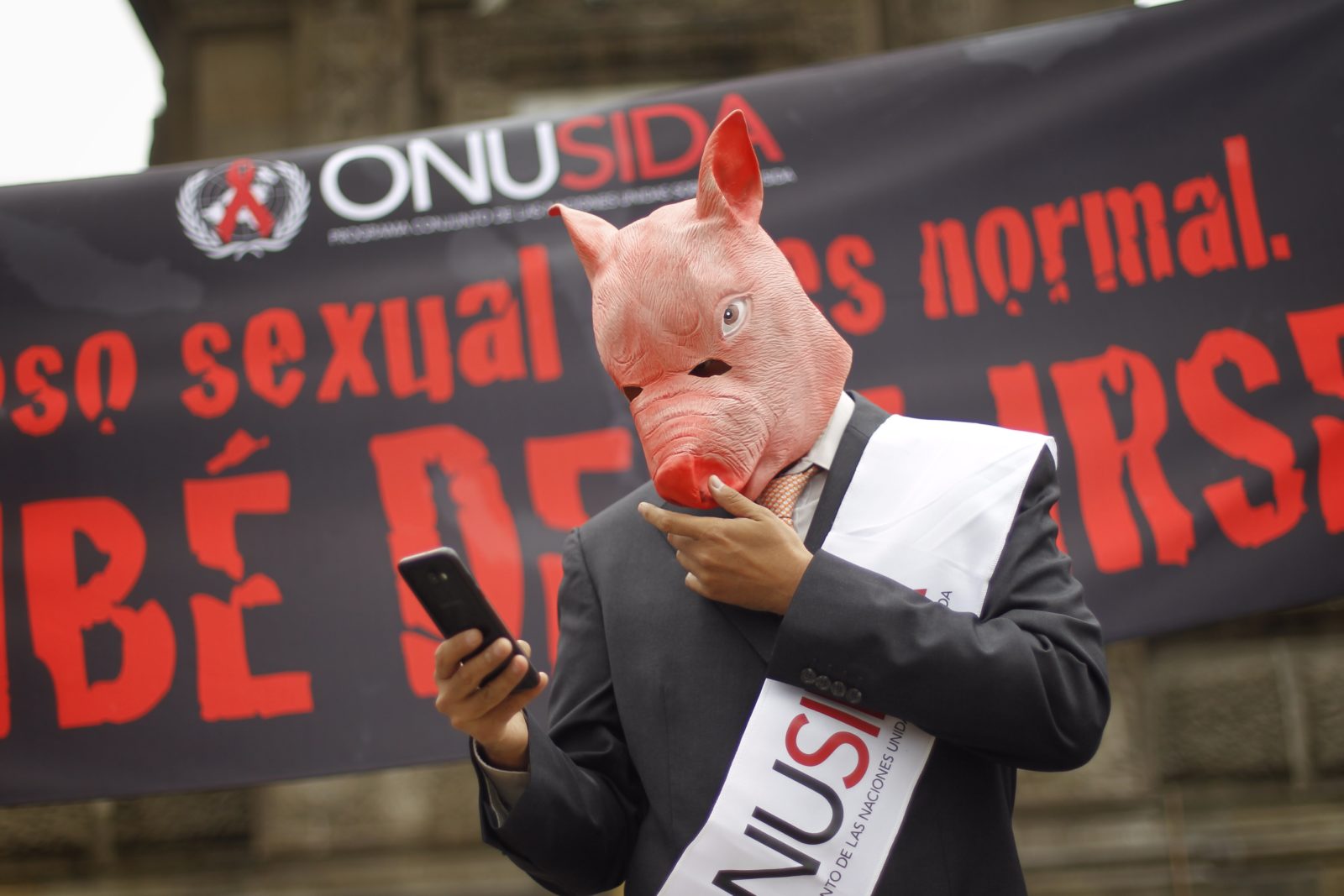 An activist wearing a pig mask attends a protest against the alleged cover-up of Executive Director of UNAIDS (Joint United Nations Programme on HIV and AIDS) Michel Sidibe in a case of sexual harassment, in Mexico City, Mexico, 14 June 2018. EPA-EFE/SASHENKA GUTIERREZ

A storm has erupted after UNAids Nigeria country director Erasmus Morah threatened to sue Aids activist Vuyiseka Dubula for implying that he is a sexual predator.

UNAids Nigeria country director Erasmus Morah has threatened to sue South African HIV activist and academic Vuyiseka Dubula unless she apologises for calling him “a sexual predator and a skirt chaser”.

Since sending Dubula a legal letter demanding an apology, two sources closely associated with Morah when he was the UNAids South Africa co-ordinator told Health-e that they had witnessed him “acting inappropriately towards young women”. Neither source wanted to be named, but were prepared to submit confidential statements to support these claims.

In addition, UNAids distanced itself from Morah’s action. “UNAids was neither informed nor consulted by Mr Morah concerning the letter he sent to Ms Dubula. UNAids has not provided support to his action, to which UNAids is not a party,” said UNAids spokesperson Sophie Barton Knotts, stressing that the organisation had a “zero-tolerance policy on sexual harassment”.

“UNAids values its constructive working relationship with Ms Dubula and looks forward to continuing that relationship as we collectively strive to end the Aids epidemic,” added Barton Knotts.

Dubula is part of a group of 23 African women activists who wrote an open letter to UNAids Executive Director Michel Sidibé, criticising his handling of sexual harassment in the organisation. In the letter, the women refer to Morah as an example of a UNAids leader who “acts with impunity”.

“Many activists have had to deal with suggestive messages and overtures from Erasmus [Morah] in the past. A number of women we have spoken to have noted that Erasmus [Morah] has asked to meet male colleagues at the office, but has asked them to meet him at his hotel,” read the letter, which was published on the website of Health-e News. Morah has asked Dubula to publish an apology on the same website.

Dubula also confirmed on her FaceBook page that Morah had addressed her inappropriately and asked to meet her at a hotel.

Dubula said she stood by the allegations and would not be silenced. “After consulting with my lawyer, I am confident that my comments are within my right to free speech and were fair comment. All my views were shared in the public interest — to end the gag on women. I have no intention of apologising to Dr Morah. I will not be intimidated into silence,” said Dubula.

Ironically, Morah’s letter — signed by lawyer Shaun Pelser of DPP Attorneys — reached Dubula shortly before she was due to be interviewed by the Independent Expert Panel set up by UNAids to look at sexual harassment at UNAids.

“The #MeToo Movement has created the space for women like me and others who have experienced inappropriate behaviour such as sexual harassment, sexual violence, bullying and abuse to speak out. I will not be silenced,” said Dubula, confirming that she would continue to co-operate with the panel.

Neither Morah nor his lawyer responded to requests for comment about why Morah had opted to take the legal route, and whether legal threats were the best way to address sexual harassment within UNAids.

Meanwhile, international HIV activists are circulating a petition demanding that Morah retract his threat, which they say is part of a campaign to “bully and intimidate” those who dare to speak out against sexual harassment.

UNAids has been rocked by tensions after revelations that Sidibé’s deputy, Luiz Loures, who allegedly sexually abused a subordinate, Martina Brostrom, was allowed to quietly resign.

Sidibé has been accused of both a cover-up and of trying to coerce the woman involved to drop her complaint. Dubula has been vocal in campaigning for UNAids to address sexual harassment and has called for Sidibé to resign. DM