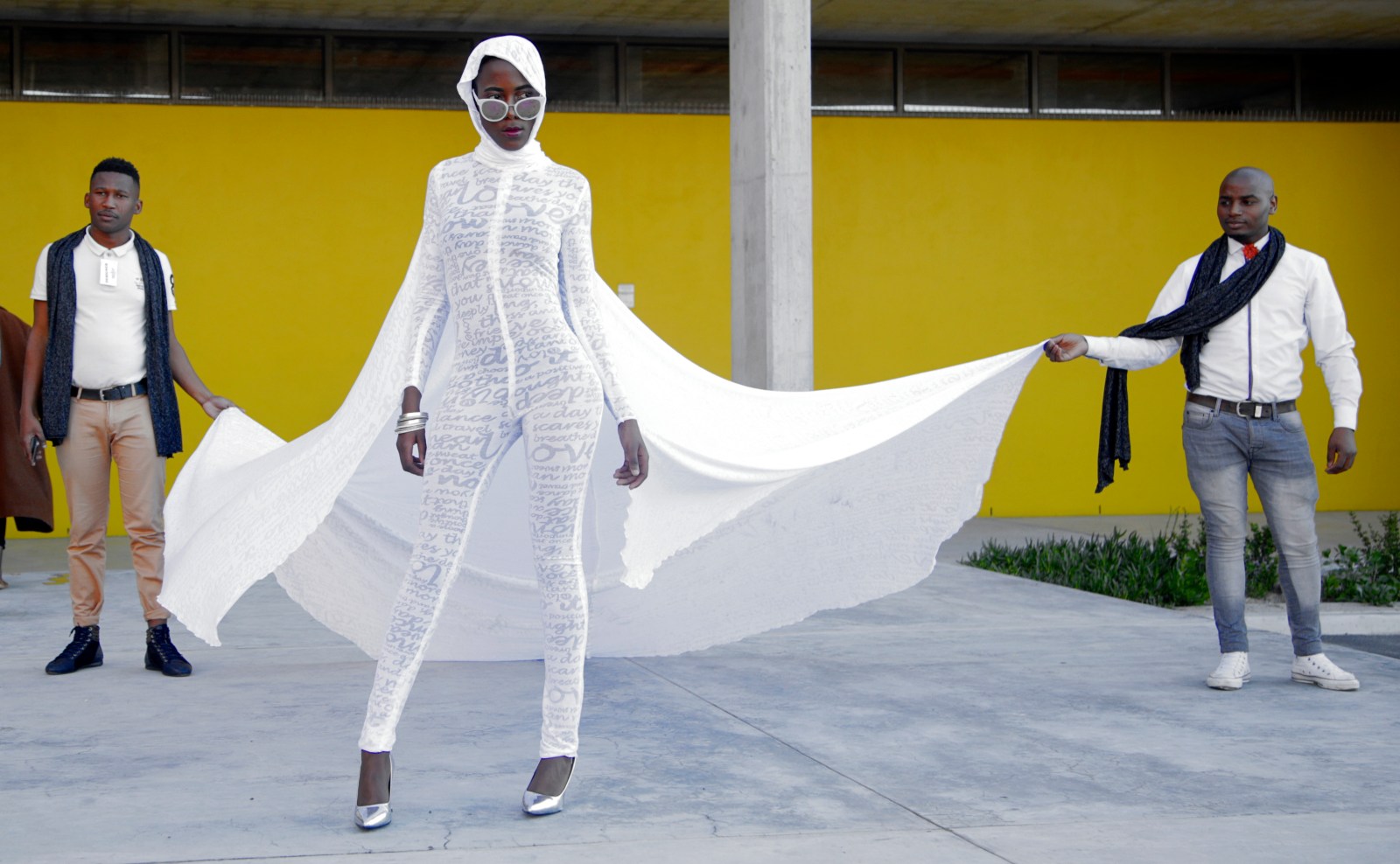 A Sew Wise show stopper was exhibited outside the Isivivana Centre during the Khayelitsha Fashion Week. Photo: Aphiwe Ngalo, 8 September 2018

The bi-annual Khayelitsha Fashion Week had the Spring Collection showcase last weekend. A total of 19 local designers displayed their artistry in afrocentric, sporty and trendy looks. Daily Maverick spoke to four designers who shared their journeys getting on to the runway.

The collection by Apa-che designer Zughdi Mohammed stood out at the Khayelitsha Fashion Week at Isivivana Centre in Khayelitsha last weekend.

With its variations in prints from military to dashiki, the eclectic line was eye-catching. What also caught people’s attention was the first model to walk on to the runway, an eight-year-old boy dressed in a military print romper who was wildly cheered on by the audience.

Mohammed, who hails from Hanover Park, said he had deliberately let the young boy walk out first. “I want to implement passion in a good way to the young ones. Where I’m from, gangsters used to be called Apa-ches and we grew up looking up to them, it was cool, we’d say ‘hey here comes the Apa-che’ and everyone wanted to be like them. I chose the nameApa-che because I want to change the stigma of Apa-ches, to take the name back. That’s why he (pointing to the young boy) went first. Now the youth will think of my clothes when they hear Apa-che.”

The name Apa-che is a message to the youth to strive for a better future and to gain an interest in fashion and aspire to be designers.

The use of different colours, prints and fabrics in his line expressed the different energies and vibrations of South Africans.

“I believe that we are all one, however different we may be, where we come from, what religion we believe in, the colour of our skin. That’s why I chose all the different prints and colours.”

Mohammed has been a designer for six years. In 2012, he enrolled into the Design Academy of Fashion in Woodstock but had to drop out after only two terms because he could not afford the fees. That did not stop him.

Trending 3 dots was one of the audience’s favourites at Fashion week, their street-style/at leisure looks in red, yellow and black appealing to younger audience members.

Trending 3 dots is co-owned by cousins Sibabalo Tyasi and Siphokuhle Tyasi. The fashion line was formed in 2016 by the Tyasi cousins who both studied Information Technology (IT), one majoring in computer programming and the other in networking.

“We saw that there was so much untapped potential in Cape Town with people making clothes. Because of our vision and interest in fashion, and background in IT and social media, we decided to open the business.”

Trending 3 dots sell their clothes on social media platforms such as Instagram, Facebook and Twitter. The Tyasi cousins sketch the designs and take them to community seamstresses who make them up, and the cousins brand and distribute their clothes to the public.

They used their IT knowledge and skills and passion for fashion designing by launching an online store which will be open to the public next month.

Nombini Mngqika and her 18-year-old-son Qaqambile Mngqika own Zamagiqwa beads and accessories. The family-run business is named after the family’s clan name, and its intricate beadwork and extravagant headpieces were showcased at fashion week.

Mngqika and her son live in Site C Khayelitsha and were showcasing for the second year. They sell their accessories through a bead stand in their community, their Facebook page and they also approach school groups of umxhentso (Xhosa ritual dancing) to get more customers.

Zamagiqwa Beads and Accessories also uses recycled products such as bottle caps in their accessories.

Their dream is to raise enough money to open their own bead shop.

The brand started in 2017 when two of the four designers Litha Samsam and Sikelela Kwatsha wore clothes in public that they had designed and styled themselves. They received compliments and they paired up with two other creatives, Avuyile Ngaleka and Lwakhe Hina.

Samsam and Kwatsha design and style the clothes while Ngaleka and Hina help with organising dressmakers, marketing and distribution.

The young group of designers’ youngest member is 15, the oldest being 22. They run their workspace in a backyard room in Kwatsha’s home, all coming from the same community in Capricorn, Muizenberg.

Ubuntu Trends does not believe in gender binaries and say that their clothes stay as true to the African identity as possible.

“We are trying to create our own Guccis. We are trying to prove to people that they don’t need to spend so much money to look good, we are gifted and can make people look good in their true African identity.” Samsam said.

Bongani Matenjwa, founder and organiser of the Khayelitsha Fashion Week, said the event happens twice a year with the showcasing of the Winter Collection in April and the Spring/Summer Collection in September. The show is running in its fourth year now with 19 designers showcasing at this Spring Collection.

Designers need to have at least three garments completed in order to showcase their creations. “We want to just make sure that the whole fashion thing for them is an ongoing thing.”

Matenjwa is not a Khayelitsha local, but comes from Bellville but works as a radio DJ at Zibonele FM, the local community radio station. Matenjwa is a second-year student in Operations Management at Cape Peninsula University of Technology.

The Fashion Week is open to all Cape Town locals, seeking to empower smaller communities. Matenjwa said that there were designers from Khayelitsha, Gugulethu, Mitchells Plain, Bellville and further afield. DM