Ford Ecosport 1.0 Titanium AT: Small car with a titaniu...

Ford Ecosport 1.0 Titanium AT: Small car with a titanium tiger in the tank 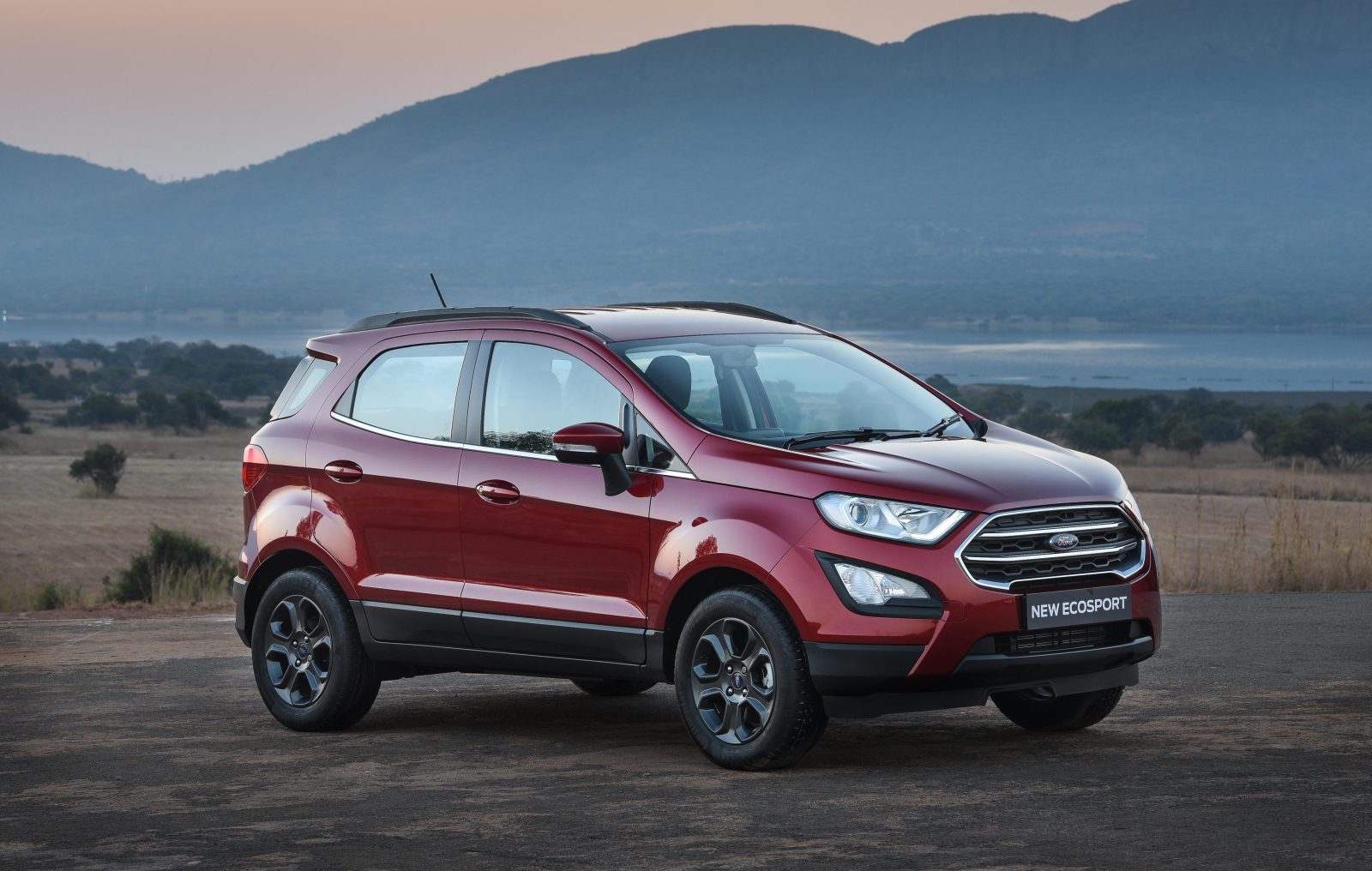 While the robust looks and raised stance typical of SUVs seem to be universally appealing, not everyone can afford the real thing. Ford’s Ecosport links a small-car footprint and affordability to SUV attitude. But is the flagship Titanium model the best option?

Nobody knows just why the world is so obsessed with SUVs right now. Gone are the days when the epitome of practical motoring was a station wagon; when most SUVs were still specialised four-wheel drive machines. 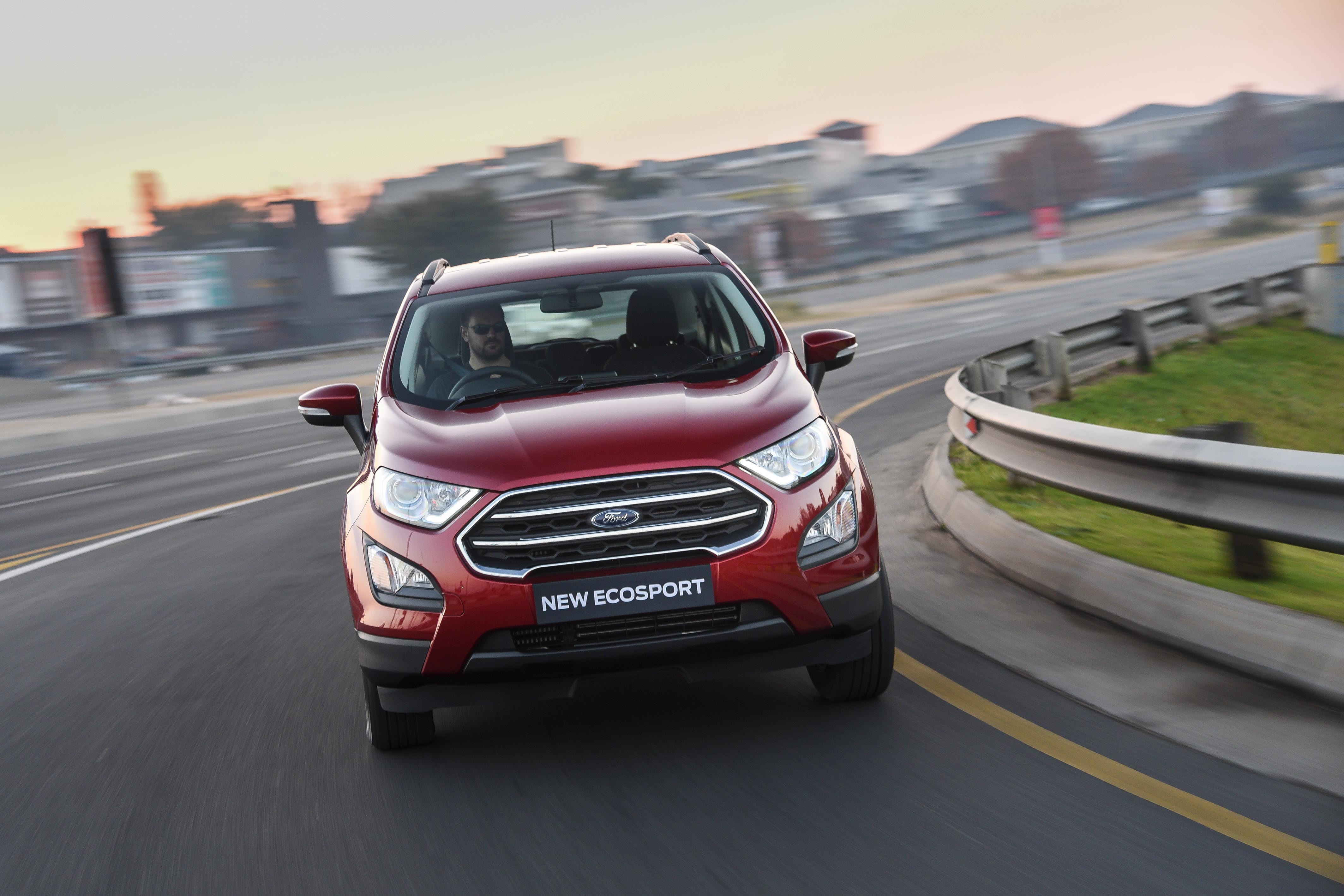 Today, SUVs rule the roost, and they come in a vast array of sizes and executions: from tiny to gargantuan, from utilitarian to luxurious, from gung-ho 4×4 to sports car quick.

One of the sub-segments that’s emerged as a result of the fascination with SUVs is the compact quasi-SUV category. It’s populated by small cars dressed up to look the go-anywhere part, but with little in the way of real off-road capability. 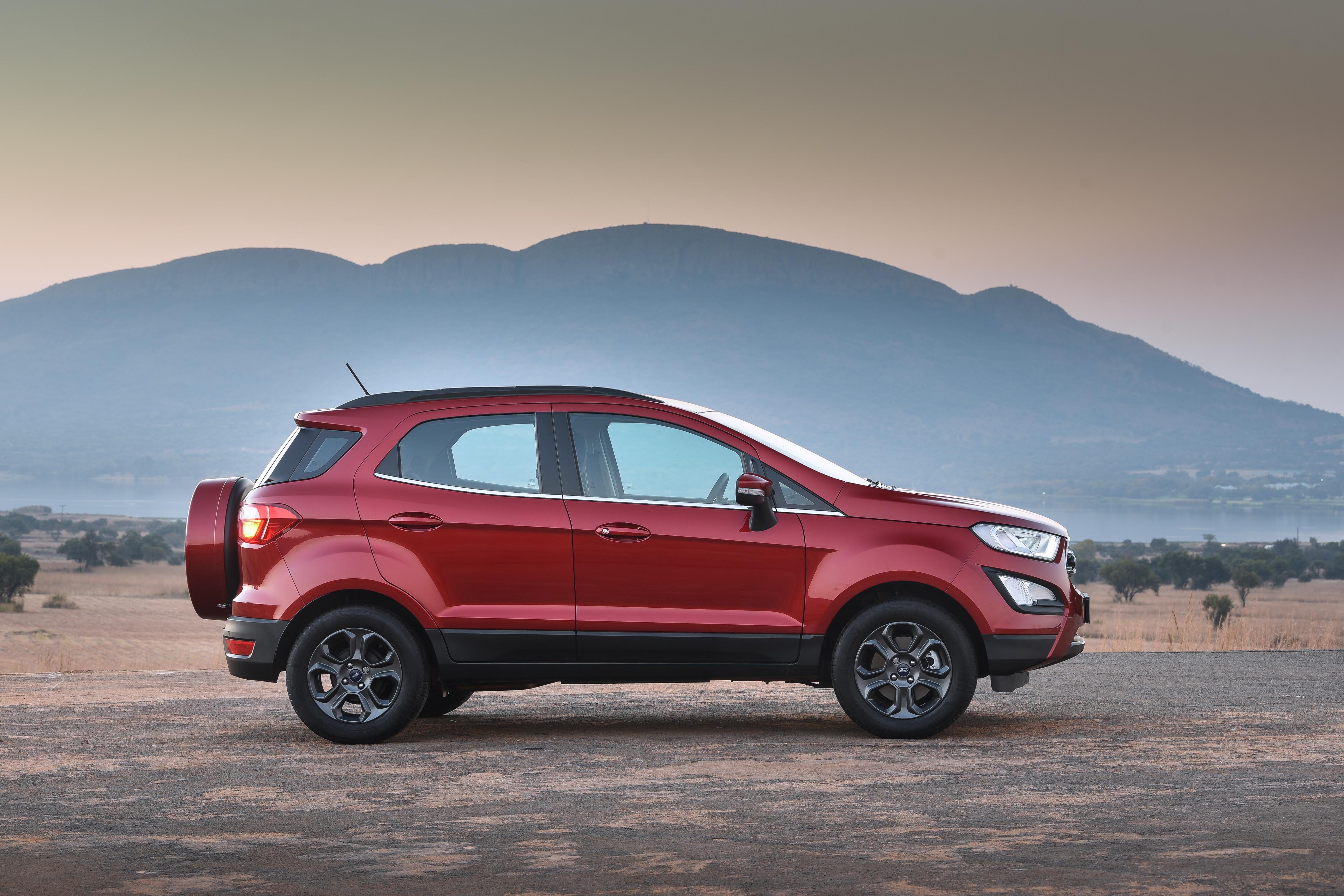 A case of attitude rather than aptitude, then – at least in SUV terms. But they do have affordability on their side: the Toyota Etios Cross slips in under R200,000, while the VW Polo Vivo Maxx is in the low R200k-category.

If you want something a little more convincing and capable, you need to up the budget – but you’re also spoilt for choice. Recently updated, the Ford Ecosport at least looks the dedicated SUV part – which may account for its popularity. 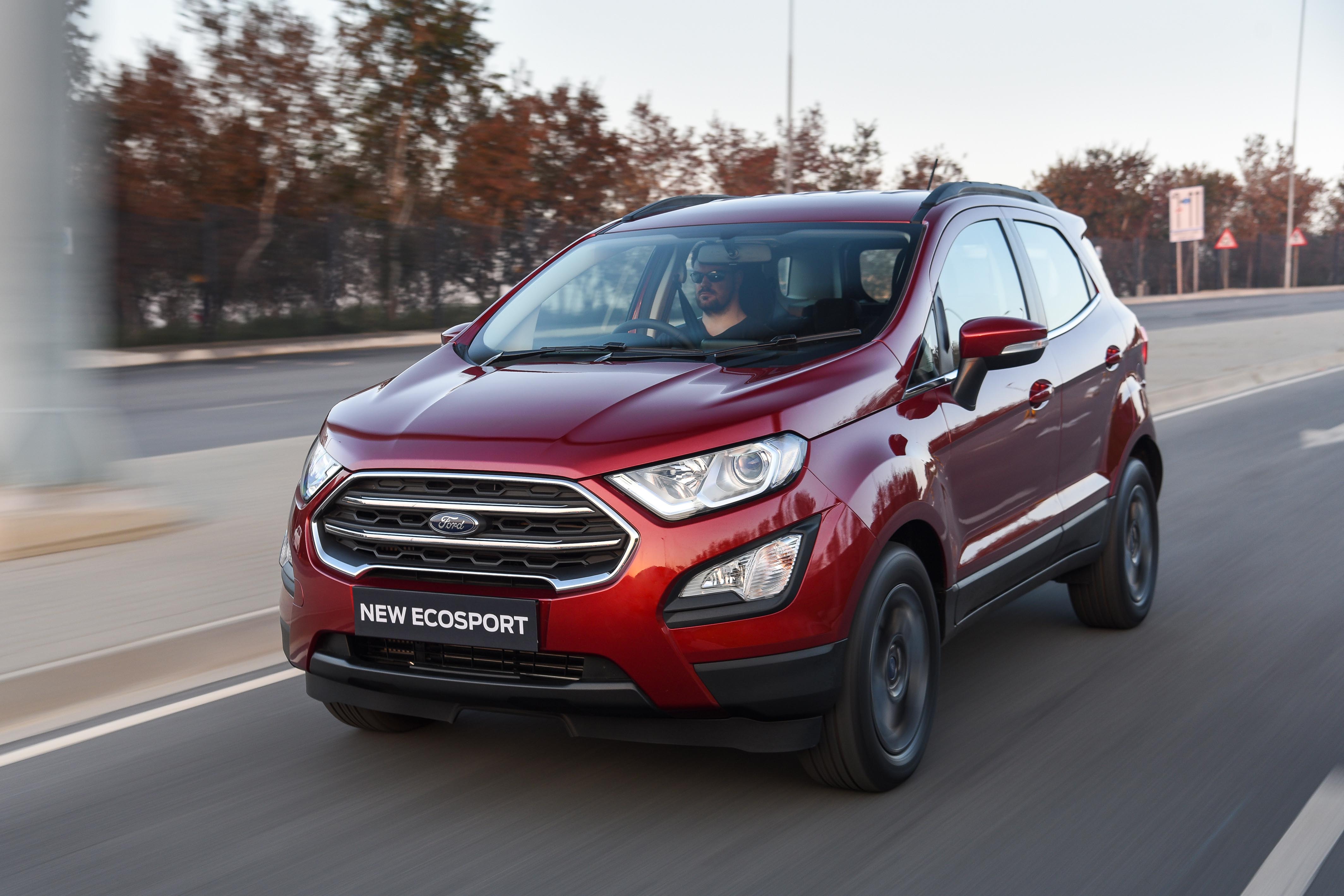 But it is by no means the only small SUV out there. Its closest rivals include the equally chunky Suzuki Vitara, Jeep Renegade and Renault Duster, but you could also add glossy crossovers such as the Mazda CX-3 and Renault Captur to the mix.

In latest guise, the Ecosport gets a spruced up exterior, including a more prominent grille, reprofiled bonnet and sleeker headlight clusters, while the outlined fog lamps also contribute to a more aggressive look. 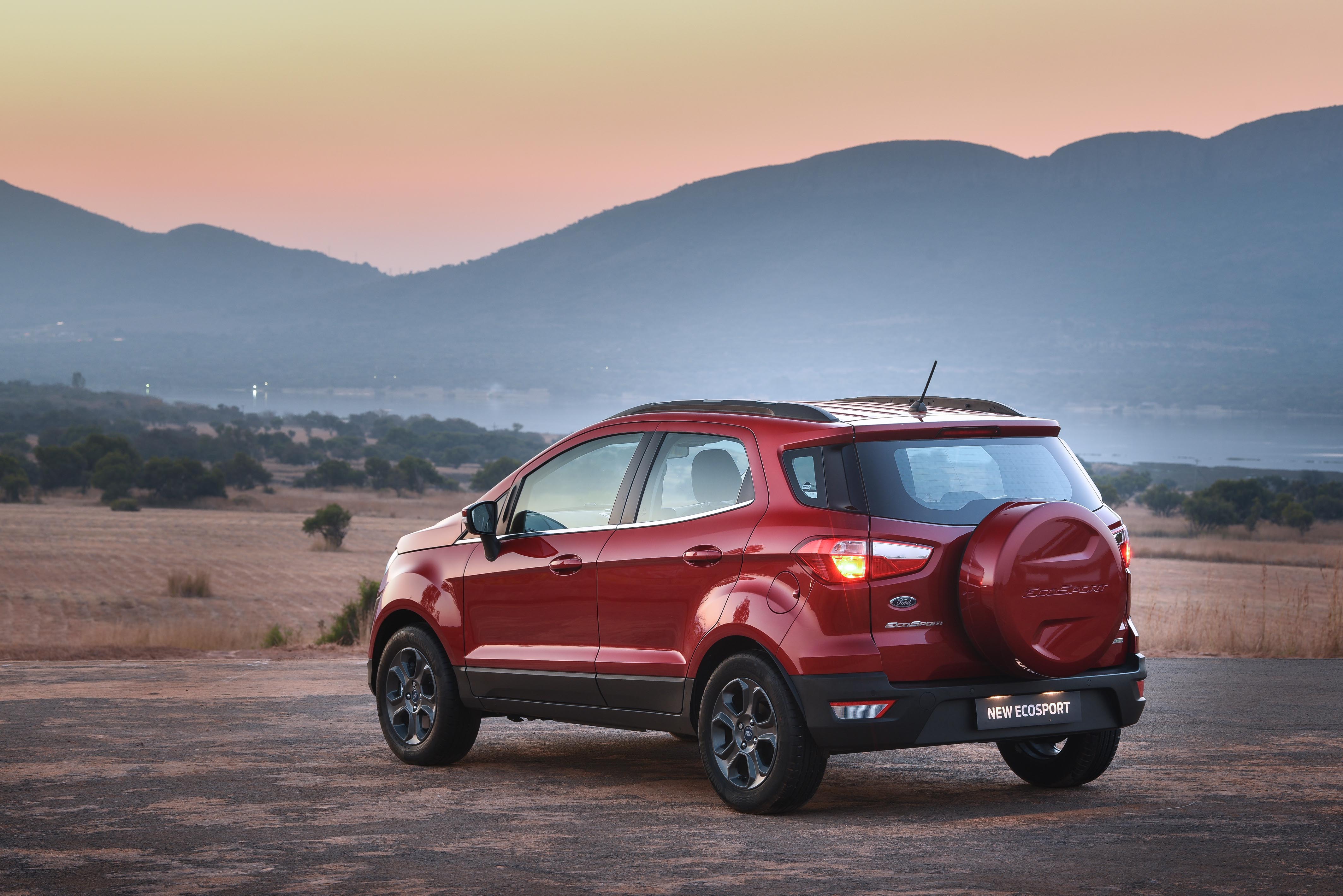 The rear retains the familiar swing-out tailgate, with the spare wheel mounted in a colour-coded housing. However, that spare wheel makes the tailgate heavy and ungainly to open and close, especially when parked on an incline.

Except for the front end, the EcoSport’s silhouette hasn’t changed: the short overhangs and 206mm ground clearance endow the little Ford with a terrier-like pugnacity that’s endearing if not conventionally pretty. New 17-inch wheels add a sporty touch. 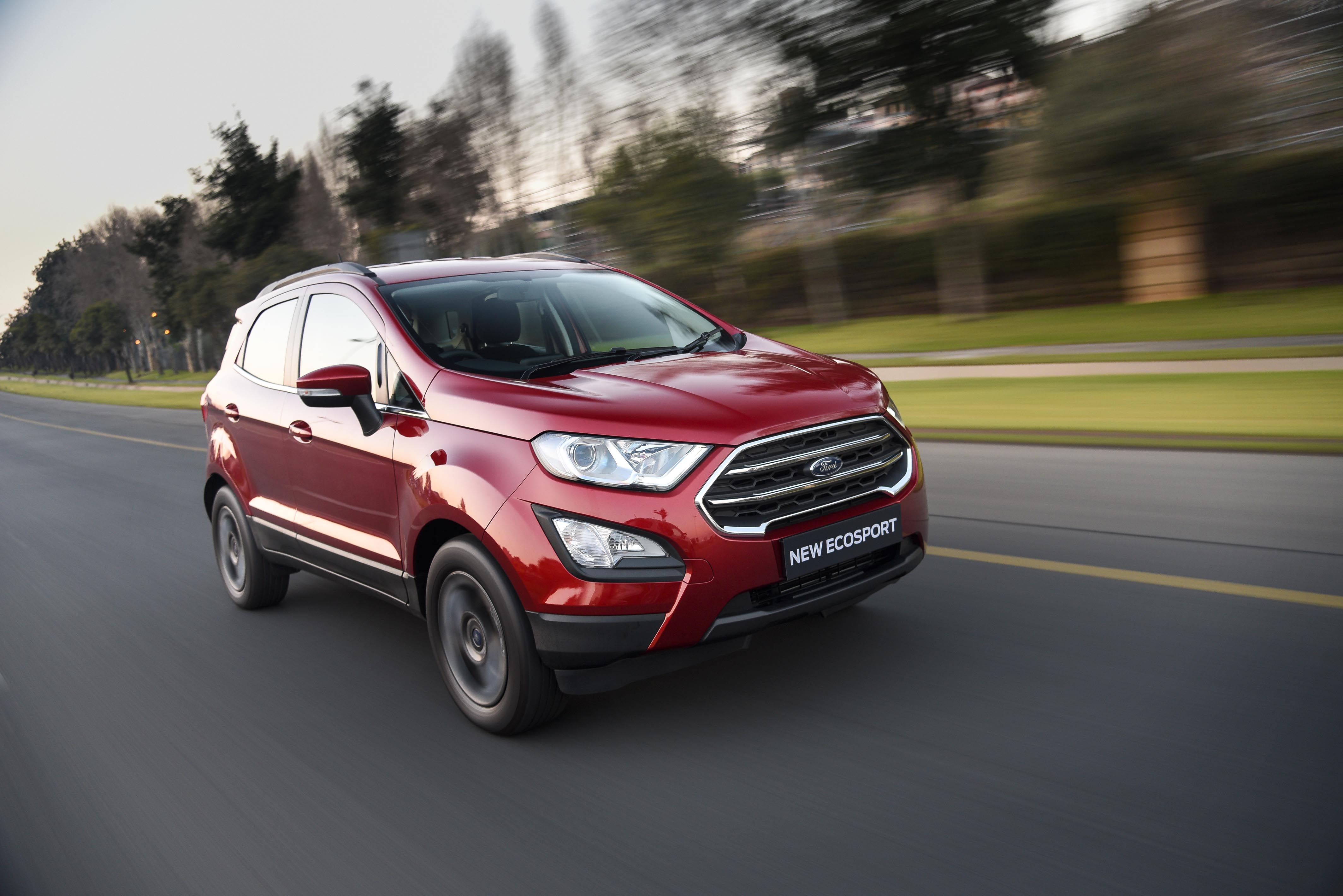 By far more significant for would-be Ecosport buyers, however, is a cabin that’s a major step up from the previous model’s interior. Gone is the mish-mash of buttons and switches, replaced by a simpler, much more intuitive control set centred around Ford’s excellent, touchscreen-based Sync 3 infotainment system.

The system is standard on all but the entry-level Ambiente model, which makes do without the touchscreen, but still gets the much-improved dashboard and intuitive switchgear array. 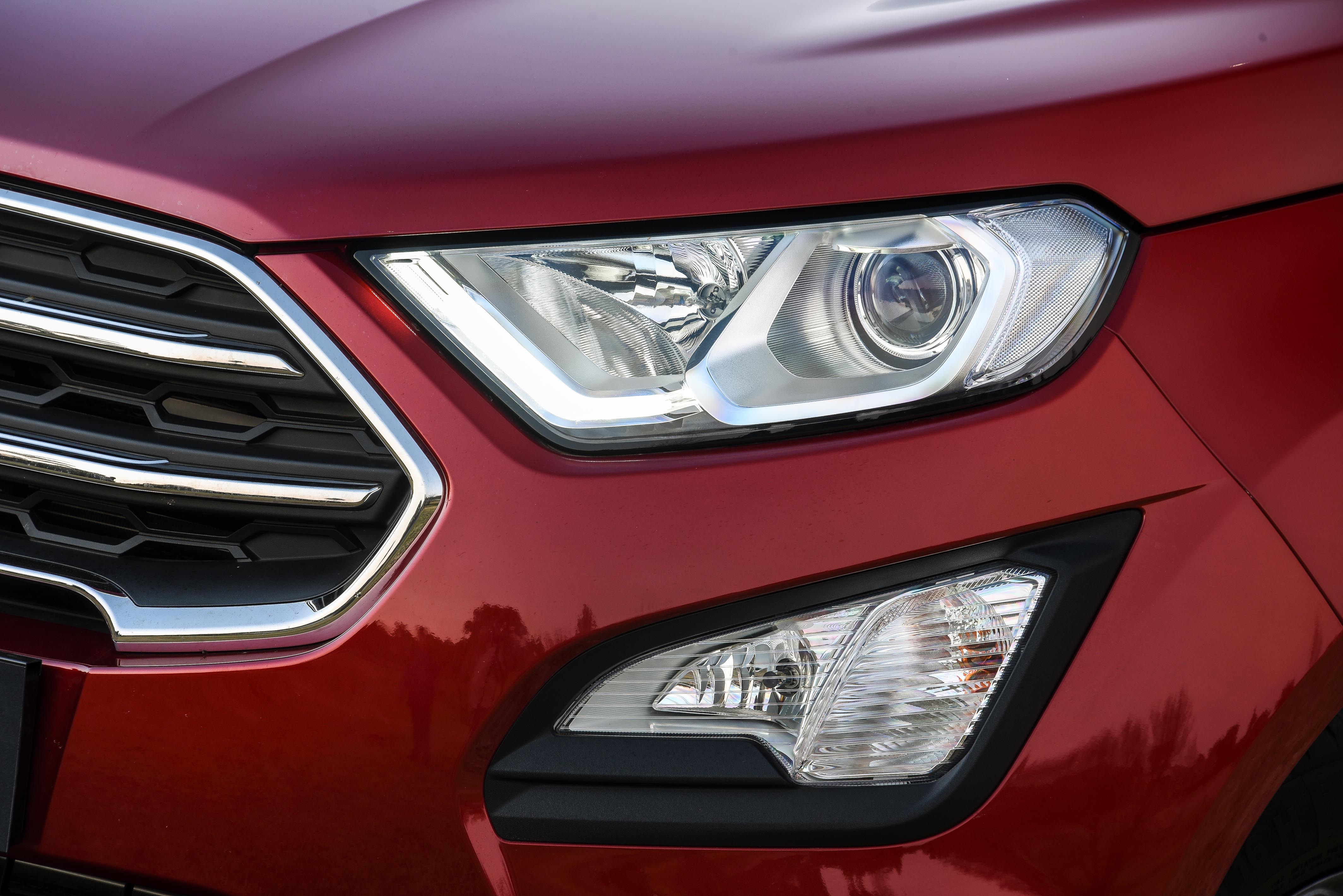 In the flagship Titanium version tested here, the touchscreen is a large 20cm affair that looks almost oversized. It’s perched on top of the dashboard, where it looks a little ungainly, but that also means it’s within easy reach of both driver and front passenger.

Sync 3 incorporates everything from multi-speaker sound, Bluetooth connectivity for on-the-move telephony and music streaming, full-colour satnav, and USB connectivity. The latter also allows Apple CarPlay functionality if an iPhone is hooked up.

I’ve said it before – the Ford system is one of the best in the business in terms of both ease of use and performance, and even outshines some fancier systems from premium marques. The main instrument cluster offers tidy analogue dials for speed and rev count, but continues the digital theme with a TFT display for the trip computer. 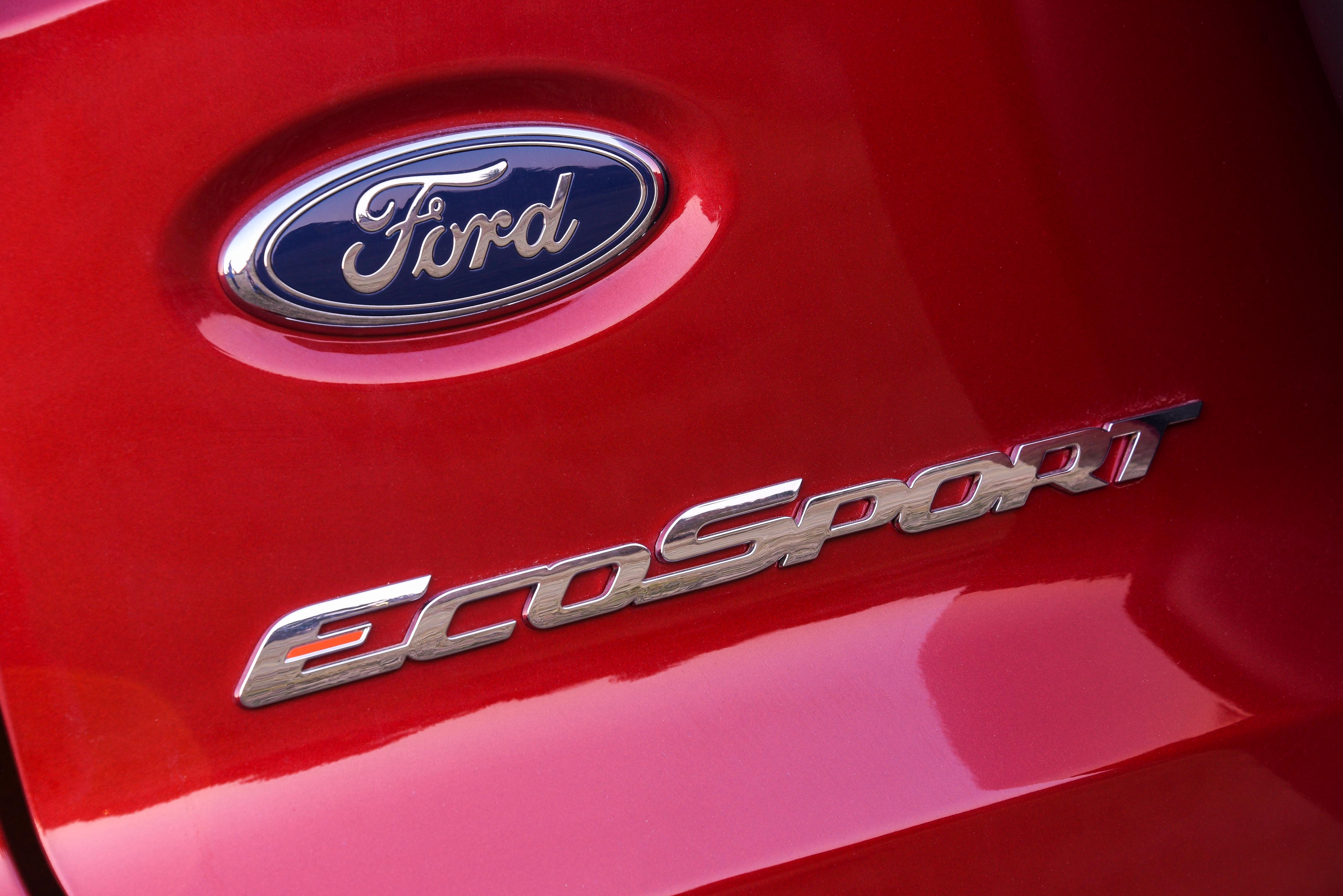 The overall cabin execution is also markedly smarter, with soft-touch surfaces and attractive finishes that look and feel more durable, too. Leather is standard on the Titanium, adding to an unexpectedly sophisticated ambience.

But practicality hasn’t been forgotten: in addition to the usual cup and bottle holders, the Titanium offers an adjustable centre armrest incorporating a deep storage compartment, while the front passenger seat has a slide-out storage drawer. 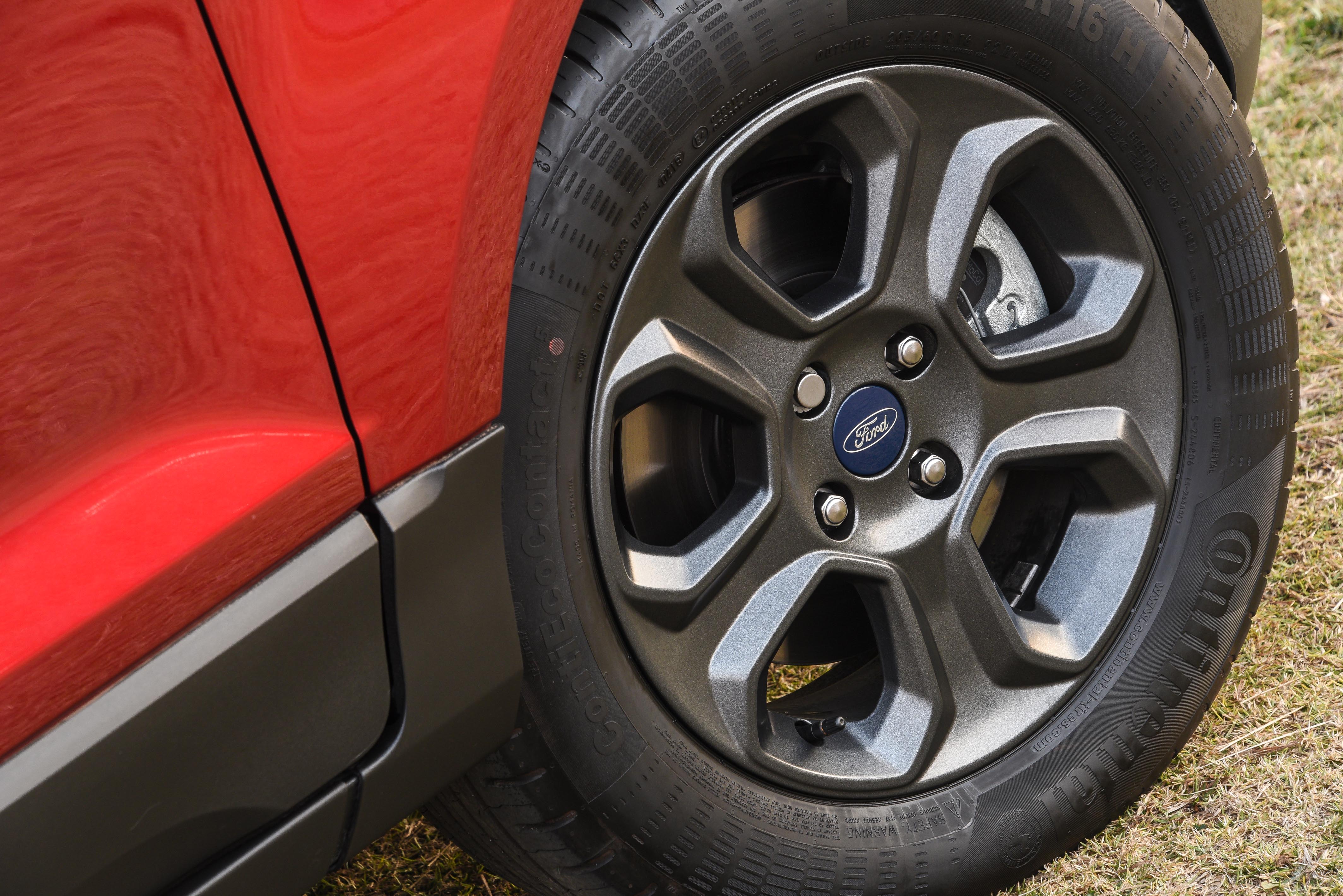 The boot remains unchanged at 333 litres, which is decent enough in compact motoring terms. You can always fold down the 60:40 split rear seats if more cargo space is needed.

As for safety, seven airbags are joined by electronic stability and traction control, roll stability control and hill launch assist, in addition to ABS brakes and tyre pressure monitoring. 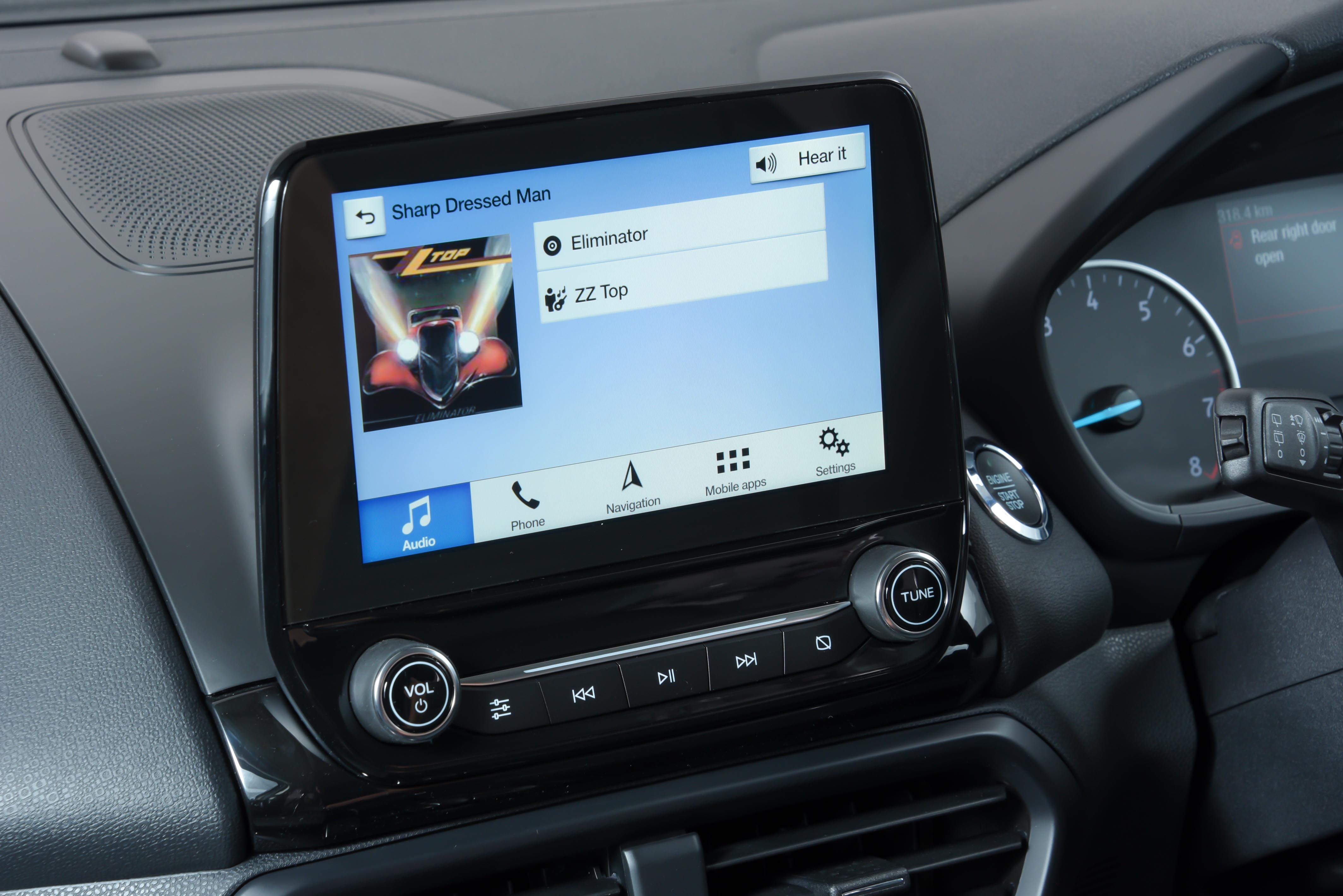 The updated Ecosport also sees the use of Ford’s much lauded 1.0-litre Ecoboost petrol engine for the first time. At 92kW and 170Nm, there’s more urge than you’d expect from three cylinders and 998cc. Part of the reason is a torque band extending from just 1,400rpm to 4,500rpm.

Also new is the six-speed auto gearbox, which promises a well-stacked ratio set to make the most of the eager engine’s output. As it turns out, though, the shifts aren’t as swift or succinct as in the new Fiesta, which uses the same engine/transmission combination – even in Sport mode.

Even so, progress is swift enough: the Ecosport gets off the mark with zesty enthusiasm, and sustains that momentum through the first four gears. The taller fifth and sixth cogs tax the engine’s capabilities on uphills and when loaded, though, and kick-downs to a lower gear are fairly frequent. 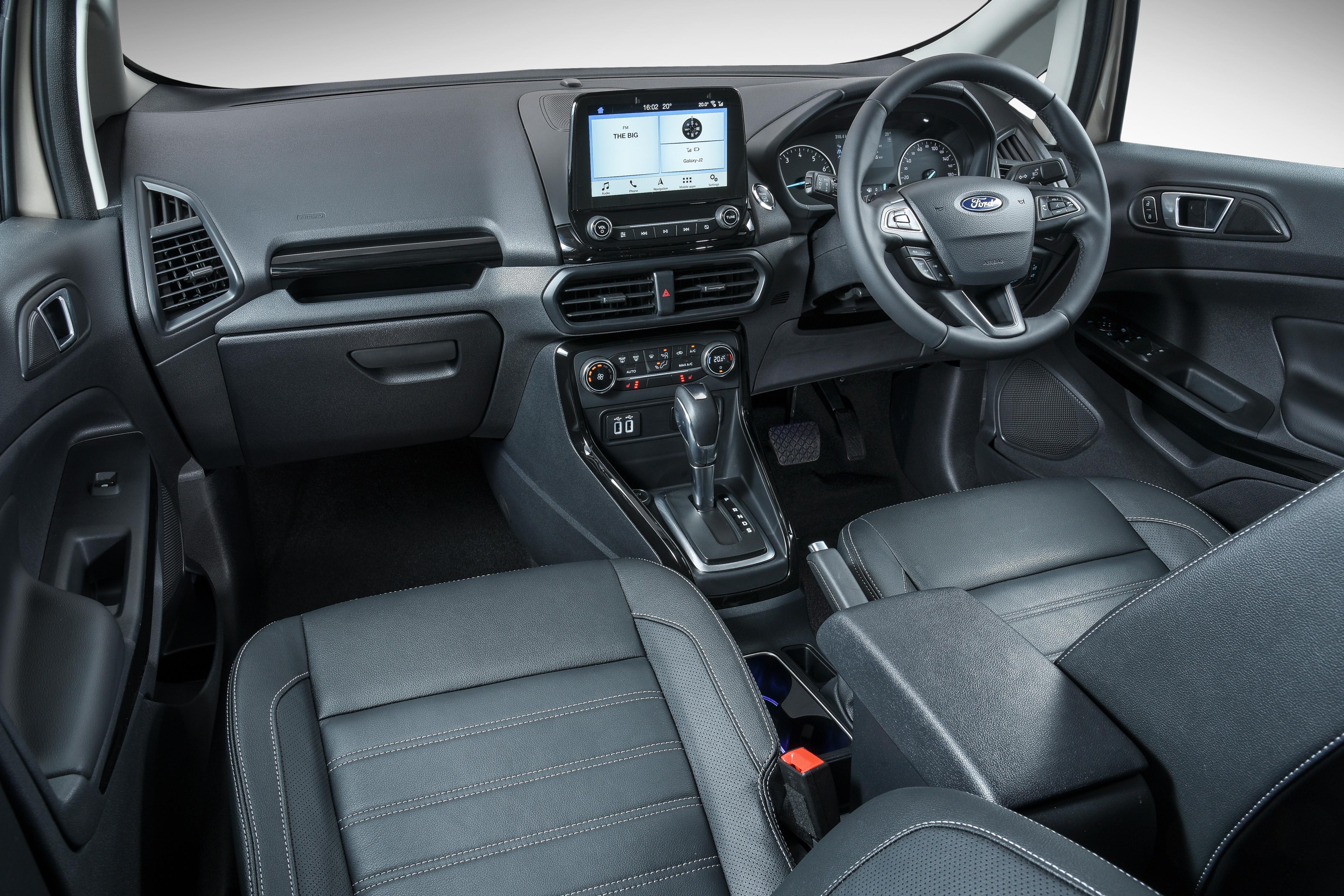 Not that your average Ecosport driver will be too perturbed: this isn’t a hot hatch, and while the Ford corners with confidence, mild understeer starts creeping in long before the need for precise feedback and more heft becomes overly apparent.

The ride is compliant, but a little firmer than expected, no doubt because of the Titanium version’s lower, 50-profile tyres. That becomes more apparent on gravel, which one assumes will be part of the Ecosport’s playground, given its rugged looks and elevated ride height. 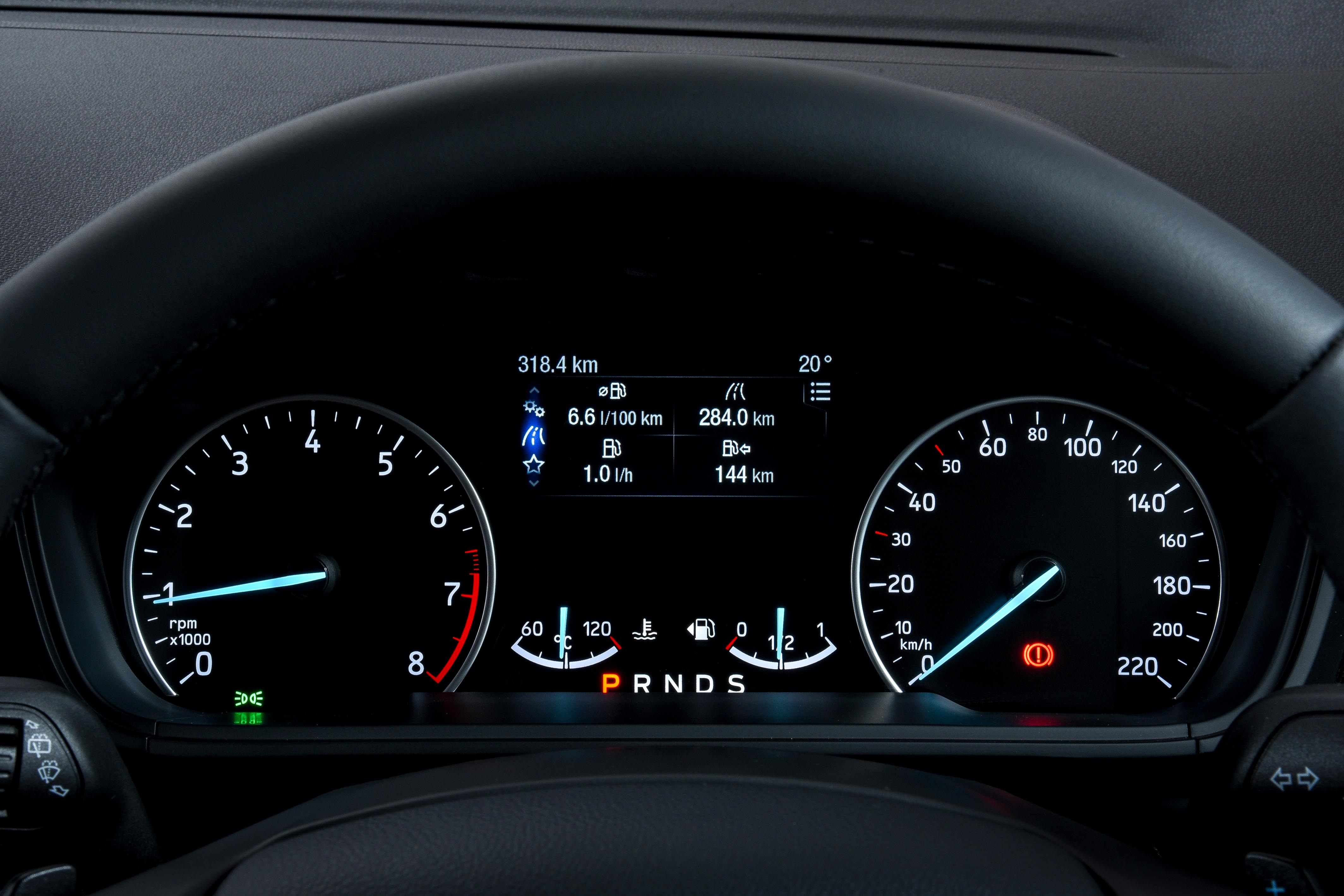 It copes admirably with unpaved roads, but it’s worth remembering that those tyres are also more susceptible to sidewall damage than sturdier, taller-profile rubber, so some circumspection is advised.

For all its SUV pretensions, the Ecosport is still at its most comfortable on tar, be it the urban jungle, or rural country roads. The suspension easily copes with undulations and uneven surfaces, and the 10.6m turning circle makes for nimble manoeuvrability.

As always, fuel economy depends on driving conditions and the driver’s right-foot discipline, but even the most frugal-minded pilots will struggle to attain Ford’s 5.4 litres/100km claim for mixed-use driving. Around 6.5 litres/100km is a more feasible day-to-day target. 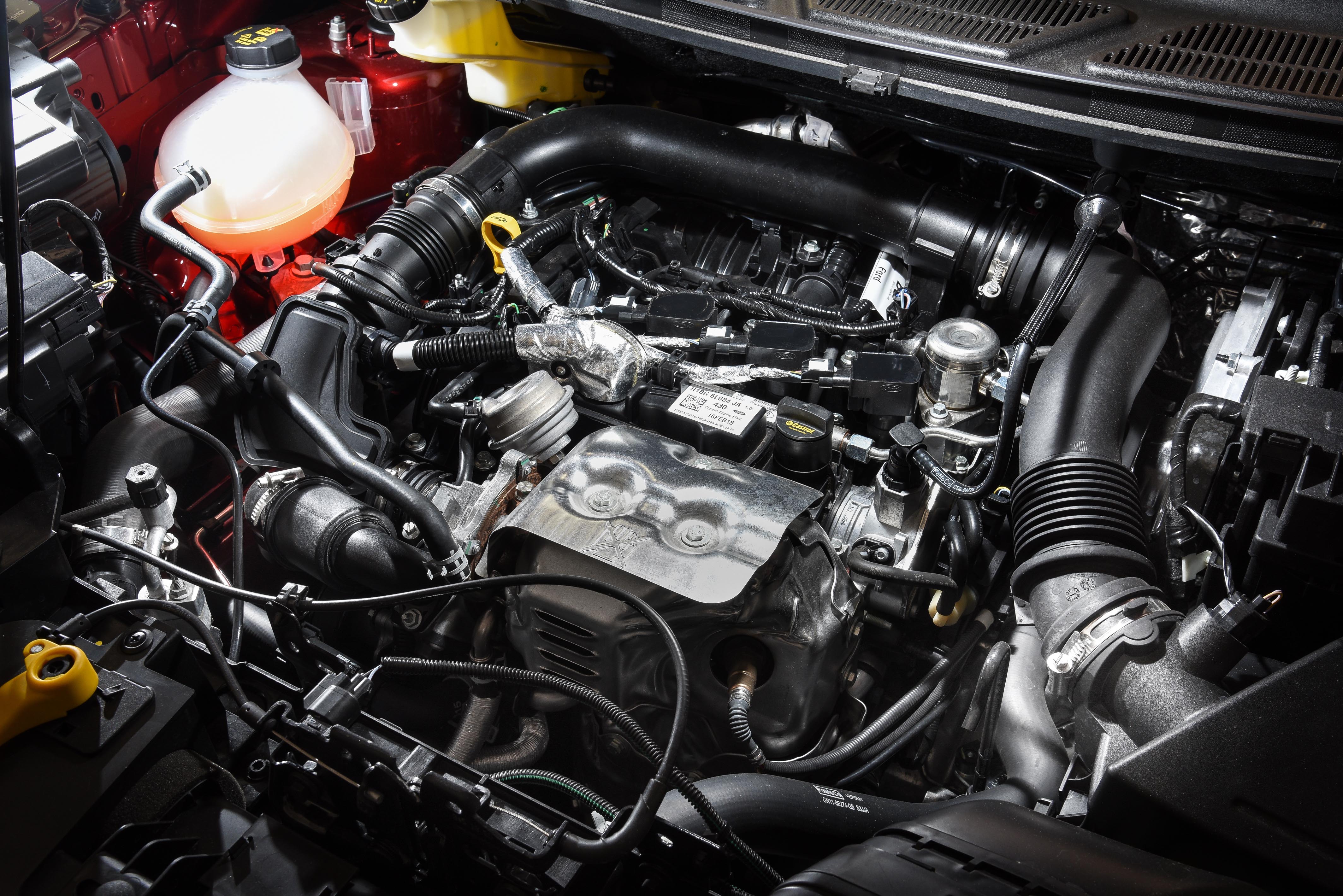 There’s a lot to like about the Ford Ecosport. It looks the frisky SUV part, covers ground with a certain cheeky enthusiasm, and in Titanium trim, has a list of bells and whistles that will put many a premium car to shame.

That said, the Ecosport is no off-roader, and while it can take gravel roads in its stride, those low-profile tyres are a limiting factor.

However, in our recession-laced economy, the Titanium’s greatest drawback is its price tag. At just shy of R340,000, it’s R75,000 more expensive than the entry-level Ecosport 1.5 TDCi Ambiente. 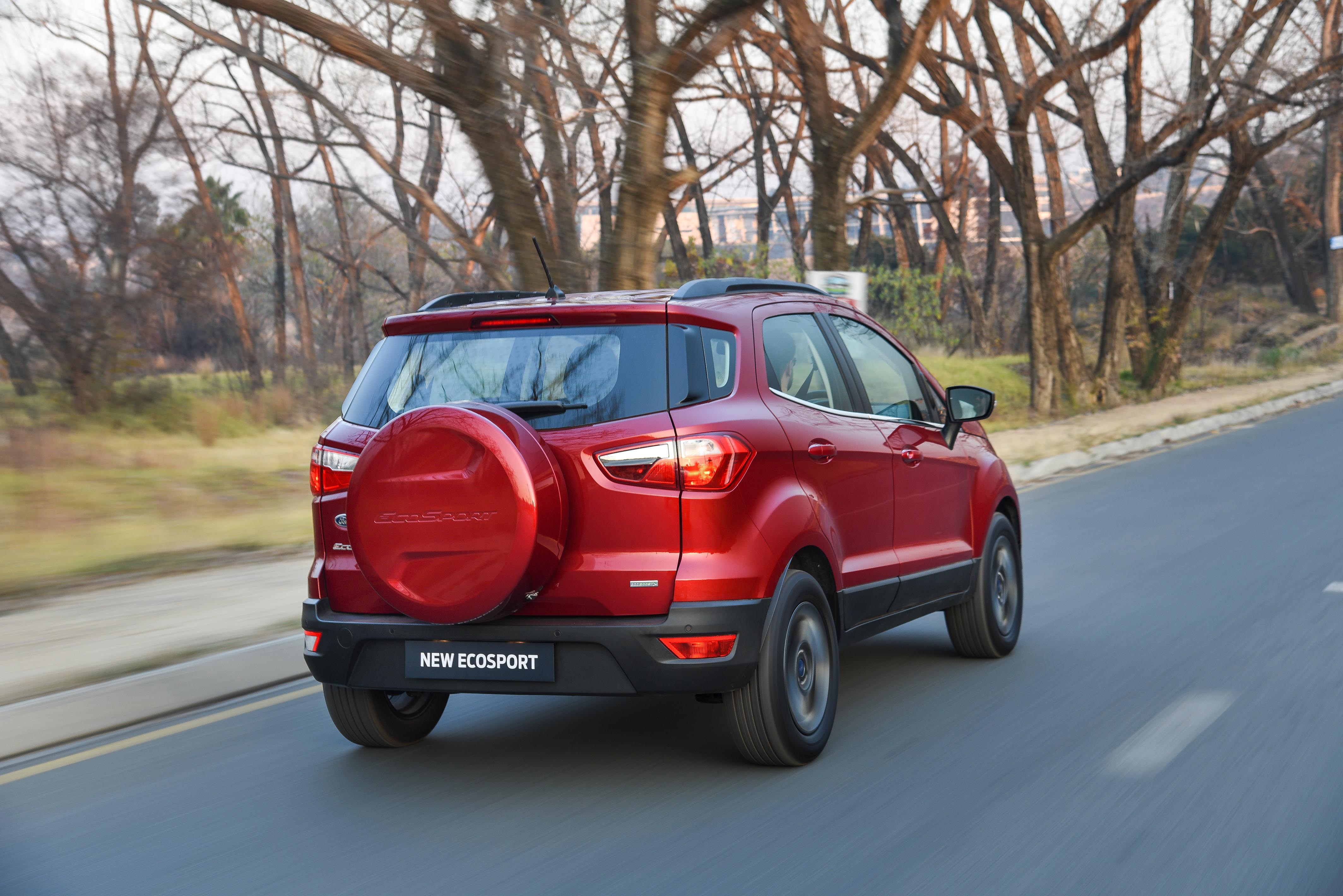 Sure, the cheapest Ecosport hasn’t got the same level of spec or tech, but it’s still well equipped – and it has a lusty turbodiesel engine, which might be a more pragmatic choice. That’s a pretty persuasive deal, in a market where value is often the deciding factor. DM

Don’t venture too far off the beaten track. Flagship status comes at a price.