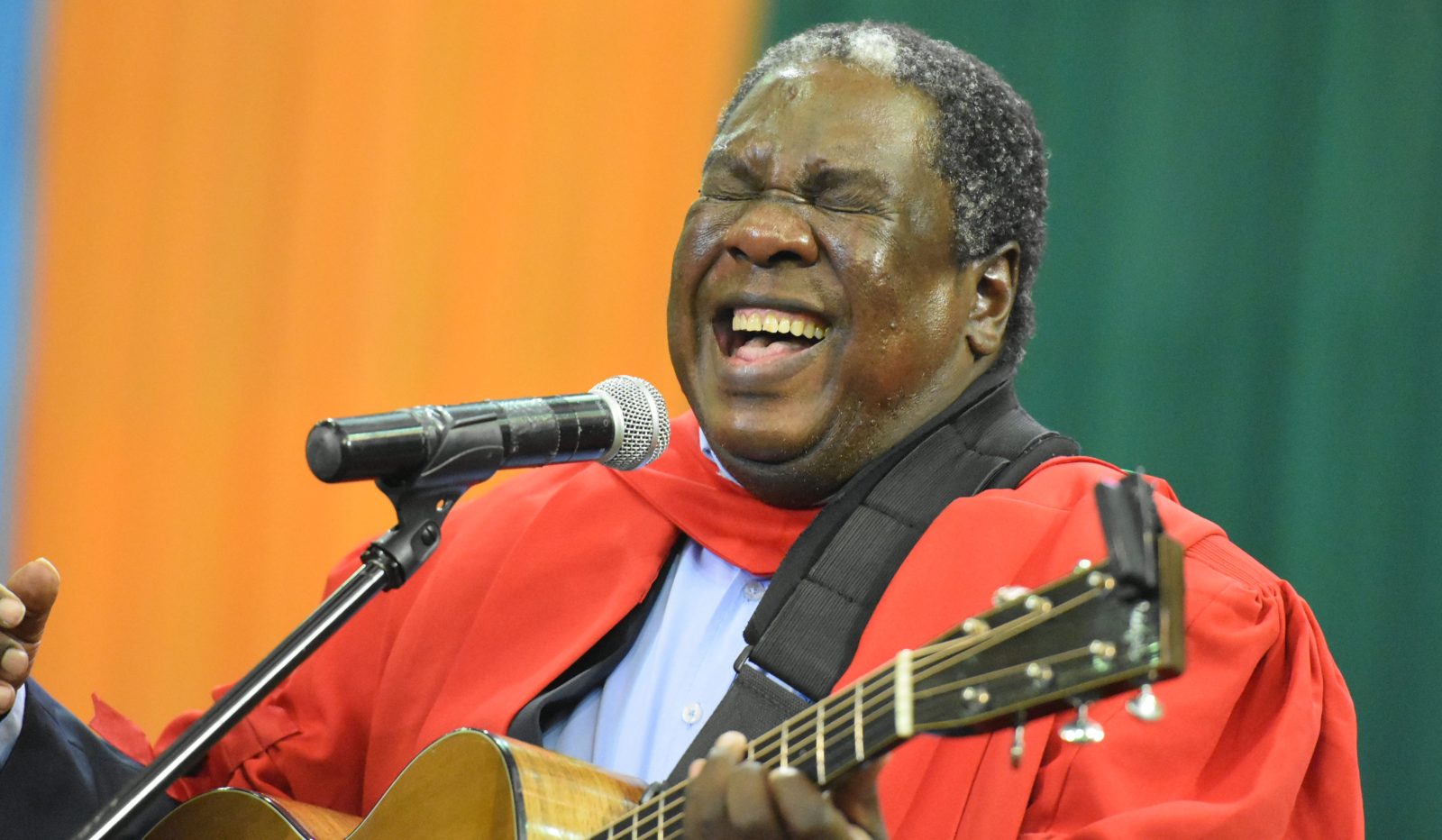 Vusi Mahlasela performs after being awarded an honorary doctorate at the University of KwaZulu-Natal on Wednesday, 12 September, 2018. Photo: courtesy of the University

An honorary doctorate was conferred on Vusi Mahlasela by the University of KwaZulu-Natal on Wednesday. He was recognised for his outstanding contribution to the betterment of South African society and to the global music industry. This is an edited version of Mahlasela's acceptance speech.

“If music be the food of love, play on,” says Orsino to Curio in William Shakespeare’s play, Twelfth Night. Indeed, music is the food of love. Music excites the body. Music nourishes the soul. Music expands the brain. Music heals the sick. Music breeds and keeps together families, friends and communities. Music buries the dead. Music brings hope, peace and reconciliation in times of wars. Music does all of these things, and more, in conditions of peace, tranquillity and plenty.

But, is music capable of doing these in our country, South Africa, which is considered the most unequal society in the world? How is it possible for music to do all these if artists themselves die of hunger from exploitation – only to be remembered and celebrated by those who supposed to care for them, government in particular, when they are dead and given glowing obituaries plus, if fortunate, Special State Funerals? How are music lovers supposed to buy the music when they are unemployed? How do those who are fortunate to buy music contribute to the welfare of musicians when they purchase counterfeits in the streets.

Where is the law enforcement in this regard? I am certain that I am not the first to pose these difficult questions. They have been asked many times before, and I suspect the inquiry will continue well into the future. But is anyone listening? Or perhaps should I say; who is supposed to listen? The answer is simply ALL OF US as a nation.

Recently, the South African Broadcasting Corporation (the SABC) announced back payment of needle-time play of music on its channels to 2014. This initiative is welcomed, even though it raises further questions like: is it not too late for the galaxy of musicians who were exploited throughout their careers and died before the cut-off period to enjoy the fruits of their craft? Why the cut-off date in the first instance? What informs it? What’s going to happen to the royalties of the period before this? How much are musicians likely to make since the broadcaster, and all other media outlets in the country, are obsessed with playing overseas music? Just switch on the television set or radio today and you will think you are in America or Europe. Whereas we recognise that we are part of a global society of nations, we must also be proud of our own local arts productions.

Controversies aside, the local music fraternity temporarily tasted a bit of Africa’s musical cake with the 90% local content playing quota. Now we are back to western cultural imposition which indoctrinates the nation to doubt or despise itself. To its credit, though, the SABC has called for public submissions on its editorial policy review. Do we as musicians, music lovers, and the academia – particularly music-based faculties or department – take time to make submissions in this regard to turn things around?

Similarly, what is the take of the White Paper on Arts, Culture and Heritage, as the national cultural policy, on this matter and many others relevant to the livelihood of musicians? Frankly, to say the least, South Africa’s cultural policy is an idealistic one size fits all for the arts. Yet for some considerable time, several African countries regarded music as the preferred cultural policy transmitter for the following reasons as stated by the scholars Lebogang Nawa and Ndwamato Mugovhani in the article, Music as implicit cultural policy instrument in South Africa:A case study of musicians Sello Galane, Rudzani Colbert Mukwevho and Khakhathi Tshisikule” (2017: page 82).

The choice of music as cultural policy leitmotif was not arbitrary. It was not done simply because it is music. The election was influenced by the respect and stature musicians enjoyed in the society as well as the fact that -from a technical perspective – music is a courier or source of other artistic genres in that it inspires, shapes and broadcasts their formations and implementations. Furthermore, music’s reach is wide, its transmission quick and economic incentives viable; it is also entertaining as it is also educational, especially for the youth who are lazy to spend time on other artistic genres like literature, drama and the fine arts. The insight above indeed proves that Shakespeare was correct when he wrote: “If music be the food of love, play on.”

Musicians can only cook, dish and enjoy this food themselves together with those for whom they create it in the first instance if given genuine opportunities when those who have the means can – to use the pun – put their monies where their mouths are. On this note, I call upon all South Africans in the form of citizens, government, academia and business to invest in and support the arts in sustained, tangible and substantive manner. DM