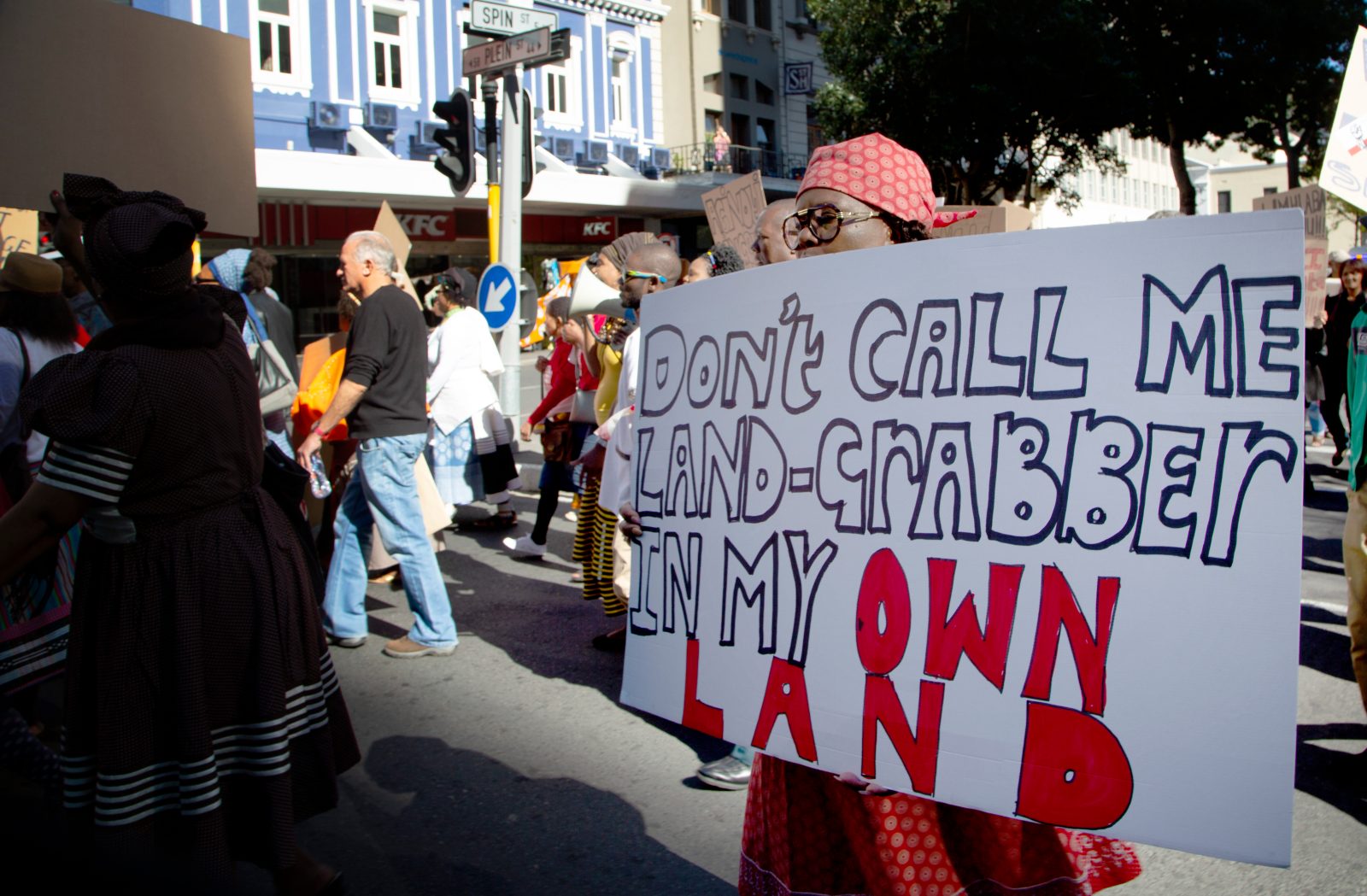 The Alliance for Rural Democracy marched to Parliament on 11 September 2018 to deliver demands which support land expropriation without compensation. Photo: Leila Dougan

In the wake of the public hearings on land expropriation without compensation, a handful of protesters gathered outside St George’s Cathedral in Cape Town on Tuesday 11 September before marching to Parliament to deliver a memorandum on the issue.

The coalition of activist groupings is demanding a pro-poor fast-tracked programme to land reform, security of tenure, the ending of corruption and nepotism when land is allocated and sustainable production support for black farmers. Other demands include affordable inner-city housing, a moratorium on farm evictions and tighter restrictions on the power of traditional leaders.

A protest was organised on Tuesday morning by civil society group the Alliance for Rural Democracy, which is made up of a coalition of land rights organisations and included farmworkers and dwellers, labour tenants, mining affected communities and people living in urban informal settlements, among others.

Karin Hendricks, a member of land rights group Reclaim the City, said activists from different organisations and provinces across the country are united in their demand for land.

“We have all been displaced, our land and property has been taken away and that is what brings us together today. Government must meet the demands and needs of people” she said.

Belinda Diedricks is a Cape Town resident who has been on the housing database for 15 years. She was marching because she believes Section 25 of the Constitution needs to be amended and people must come together to “fight for the right to land and houses”.

Lumumba Chai from Reclaim the City said there is no need for the Constitution to be amended for land expropriation to take place, because what’s really missing is the political will. “Section 25 has never been used, I don’t see a need to change the Constitution, it just needs to be enforced,” he said.

Emily Tjale from The Land Access Movement of South Africa said that the prevalence of land grabs can be understood in the context of the slow pace of land reform. She said land grabs are a way of repossessing what people were previously dispossessed of.

“If you reclaim what belonged to you which was taken away they say you are invading, you are an illegal occupier… (but) the slow pace of land reform provokes anger,” said Tjale.

Leroy Joseph, who represented the interests of farmworkers and farm dwellers raised concern about illegal evictions that are still taking place in rural areas, poor living and working conditions on farms and the lack of security of tenure. “Farm workers don’t always get treated well and farmers disrespect us… There is widespread corruption and collusion between farm owners and government officials,” he said.

The list of demands was handed over at Parliament and will be given to the Minister of Land Reform and Rural Development and Parliament’s Constitutional Review Committee.

A parliamentary review committee was then set up to consult the public on amending Section 25 of the Constitution to allow for expropriation without compensation. Over 500,000 submissions were received and a report back on the written submissions are due in Parliament on Wednesday 12 September. DM