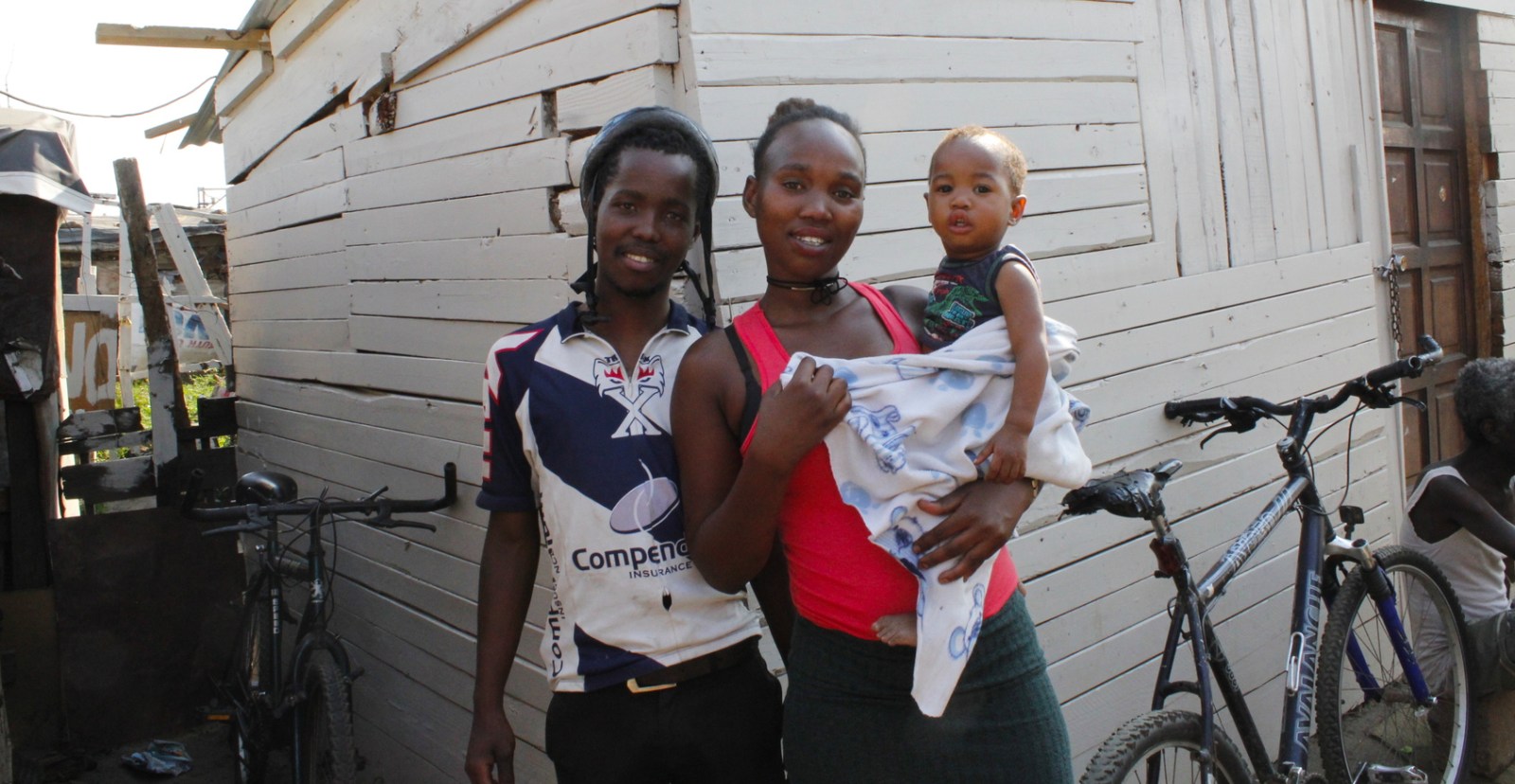 Mfanafuthi and Nok’zola Zondo live in a shack alongside KwaMashu Hostel. “Even without an official border it feels like we’re living in a different country outside South Africa,” says Mfanafuthi. All photos: Nomfundo Xolo

Hostel dwellers at A-Section in KwaMashu marched to Durban City Hall on Monday, 3 September. They called for their units and toilets to be fixed, and that more be done to fight crime in the hostel. They said their area has been ignored by government for more than four years.

About 40 people took part in the protest, some with fighting sticks. A memorandum listing the community’s concerns was addressed to eThekwini Mayor Zandile Gumede. It was received by her adviser Mlungisi Ntombela.

Bonginkosi Sibiya from Nongoma, in northern KwaZulu-Natal, has been living in KwaMashu’s hostel for 15 years. His father lived in the hostel for 40 years. They both had intended to stay there only while seeking employment in the neighbouring areas, but Sibiya says in the 15 years he has only been able to get temporary jobs, paying him only enough to provide for him and his wife.

The hostel, which consists of many blocks, is home to thousands of people who share about a dozen communal bathrooms, with half of them non-operational. Some of the sewage drains are blocked and leak on to the walkways and doorsteps of the units.

Many families in the hostel community have built shacks using mud, planks and metal sheets alongside the brick and mortar structures, because families with women and children cannot live inside the hostel units. The hostel was originally built for workmen who lived without women. The shack-dwellers are part of the hostel community.

Nhlakanipho Biyela says the hostel is notorious for crime and home to many gunmen involved in assassinations. She described the living conditions as “intolerable and inhumane”.

“A-Section was divided into two different wards after the local council elections in 2016. The hostel now fell into a new ward… We get no basic services unless we burn tyres and stop trains and threaten the city’s economy. To them, we’re not deserving of any benefits rightfully ours as a community,” says Biyela.

Dimakatso Mohoto lives with her sister and four children in a one-room shack. She says that nearby is a broken drain with sewage. She complains that it is unsafe and unhealthy. “It’s been two weeks and nothing has been done about it,” she says.

We made numerous attempts to get comment from ward councillor Lindiwe Ncayiyana, but she would not give comment, insisting that she was busy.

Local bicycle mechanic, Mfanafuthi Zondo lives with his sister, Nok’zola in a one-room shack. It barely fits their beds that are squeezed next to each other. He says he is ashamed of living in the area: “We have been blatantly excluded. Even without an official border it feels like we’re living in a different country outside South Africa. Our rights are being stomped on like the dirt we walk on. Sometimes I don’t even tell people where I live. I refuse to believe that there is a community allowed to live like this,” says Zondo.

The siblings moved to the hostel after they lost their mother in 2009. Soon after her burial, they were chased out of their home. Since building their shack alongside the hostel buildings, they’ve been surviving on a social grant and by fixing bicycles. DM