At last, the perils of identity politics in the spotlight 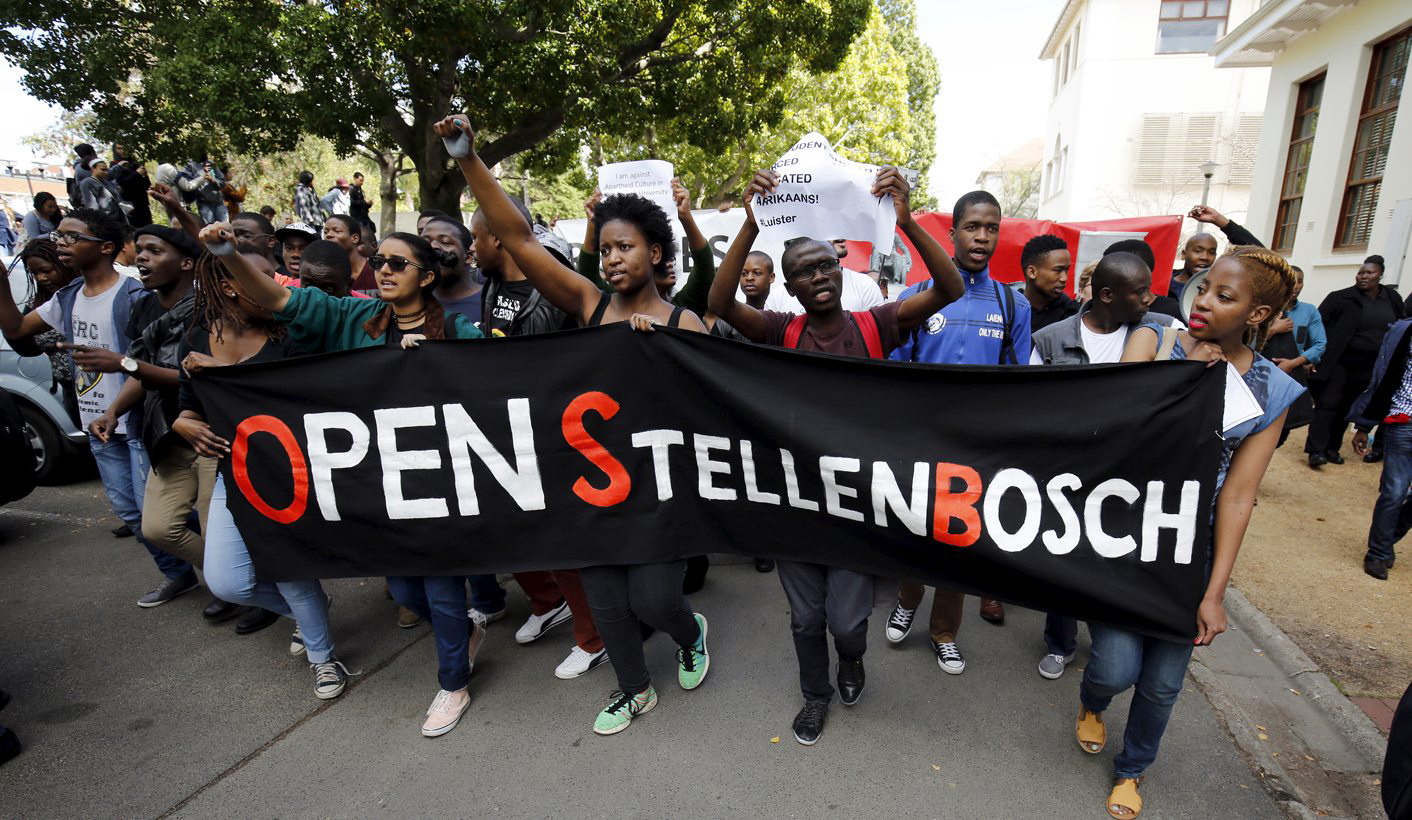 File Photo: Students march with a banner during a protest at South Africa's Stellenbosch University in Stellenbosch, in this picture taken September 1, 2015. Photo: REUTERS/Mike Hutchings

When Dagbreek Student Affairs, the drafters of the booklet Inkululeko: Talking Freedom, read the criticism of our booklet by Stellenbosch University Law Faculty lecturers Dr Bradley Slade and Professor Henk Botha, we were delighted, writes TIAN ALBERTS. This is the moment when we realised that our objective of instigating levelled debate on campus had materialised.

Drafting Inkululeko was an intensive, time consuming exercise; the product of long observations and debate, not about what identity politics and intersectionality could constitute in theory, but of how it plays out in practice where we and many others experience its divisive aftermath.

The response by Public Law lecturers at Stellenbosch University was gratifying, because for the first time on our campus, deeply entrenched and uncorroborated ideas about identity, power and privilege that have been left uncontested and equated to truth have been brought into the spotlight.

The response to our booklet can fairly be described as a thumbs down. We, however, regard it as a “thumbs up” that our intervention has encouraged critical thinking and new debates about “transformation” in an environment too often dominated by established “truths” about power, privilege and identity. We welcome the call to rigorous debate and contestation. At last.

The core problem of Botha and Slade’s critique is that they romanticise identity politics as a theory, instead of analysing how it translates into practice.

Dagbreek Student Affairs found modern critical assumptions about identity on campus to be wanting and false. Our remedy – Inkululeko: Talking Freedom – is a push for the “rigorous debate and contestation” that Slade and Botha would like to see, but under their preferred circumstances.

Their claim that the drafters of Inkululeko are “white, privileged, heterosexual males in Stellenbosch who resist the language of transformation” is reminiscent of the ad hominem attacks that are designed to prevent white students (and especially students of colour who defy the imposed assumptions of identity politics) from displaying the slightest dialectical agency.

Stellenbosch University in its pursuit of a “transformed and integrated academic community that celebrates critical thinking, promotes debate and [that] is committed to democracy”, as highlighted in its Vision 2040, should welcome the fact that a residence, widely considered to be apathetic and unaware of campus conversations, not only contributed to critical thinking and transformation but in fact assembled a vehicle for the silent majority on campus to enter critical conversations from which they have been alienated, due to being labelled “privileged”, “oppressors”, “sell outs”, “fake womxn” and “Uncle Toms”.

Where the labels of identity politics aim to shame and ostracise, Inkululeko seeks to draw everyone into conversations that they have avoided or been banished from in the past. This should be welcomed even by those who reject Inkululeko’s theoretical framework.

Botha and Slade implore the drafters of Inkululeko to “engage in analysis rather than simply indulge in conspiracy theories and over-simplifications”.

The question we ask is this: why is it that the professors have never analysed the phenomenon of identity politics sweeping campuses in the West? There is a vibrant debate, led by academics, in other countries. But in South Africa the rule of thumb is silent acquiescence. It has been left to students, like those in the residence halls of Dagbreek, to undertake this function.

Granted, we cannot do it with the specialised jargon and indigestible analysis employed by our professors. Instead we have offered a relatable breakdown of a “freedom versus identity politics” because this debate is crucial to South Africa’s future and our academics have neglected to encourage it, or even postulate its terms.

The beauty of Inkululeko: Talking Freedom is that, like a documentary (but unlike lone voices that tend to offer alternative analysis in insulated echo chambers), the booklet cannot be shamed into self-censorship and withdrawal. It cannot assume a fragile self-esteem that meekly accepts the language of “guilty as charged”. As with the 2015 Luister-video, students and staff have to “listen” first before responding with criticism, anger or hostility.

While professors at universities make a case for “real” identity politics and intersectionality theory (as many make the case for “real” socialism) under the guise of “substantive equality’, they will find that on ground level, where it is applied in practice in classes or at leadership programmes, there is nothing encouraging about it when the outcomes of its application are observed.

These outcomes are students separating into hostile groups and employing narrow-minded group think based on the common grounds of race, gender and sexuality. These outcomes are certainly disadvantageous for those that find themselves on the wrong side of identity politics, but manifestly even more so for those that were not welcome at the university during the apartheid era.

As New York University professor Jonathan Haidt said, it (intersectionality) will make things much worse for those that it claims to help.

Of course, the drafters of Inkululeko welcome all the criticism of the booklet that the world would like to offer. Acting otherwise would render us nothing short of hypocritical.

We also understand that adverse response to Inkululeko is a prerequisite for the debate about identity politics that the booklet seeks to engender. This debate is precisely what we wanted. DM