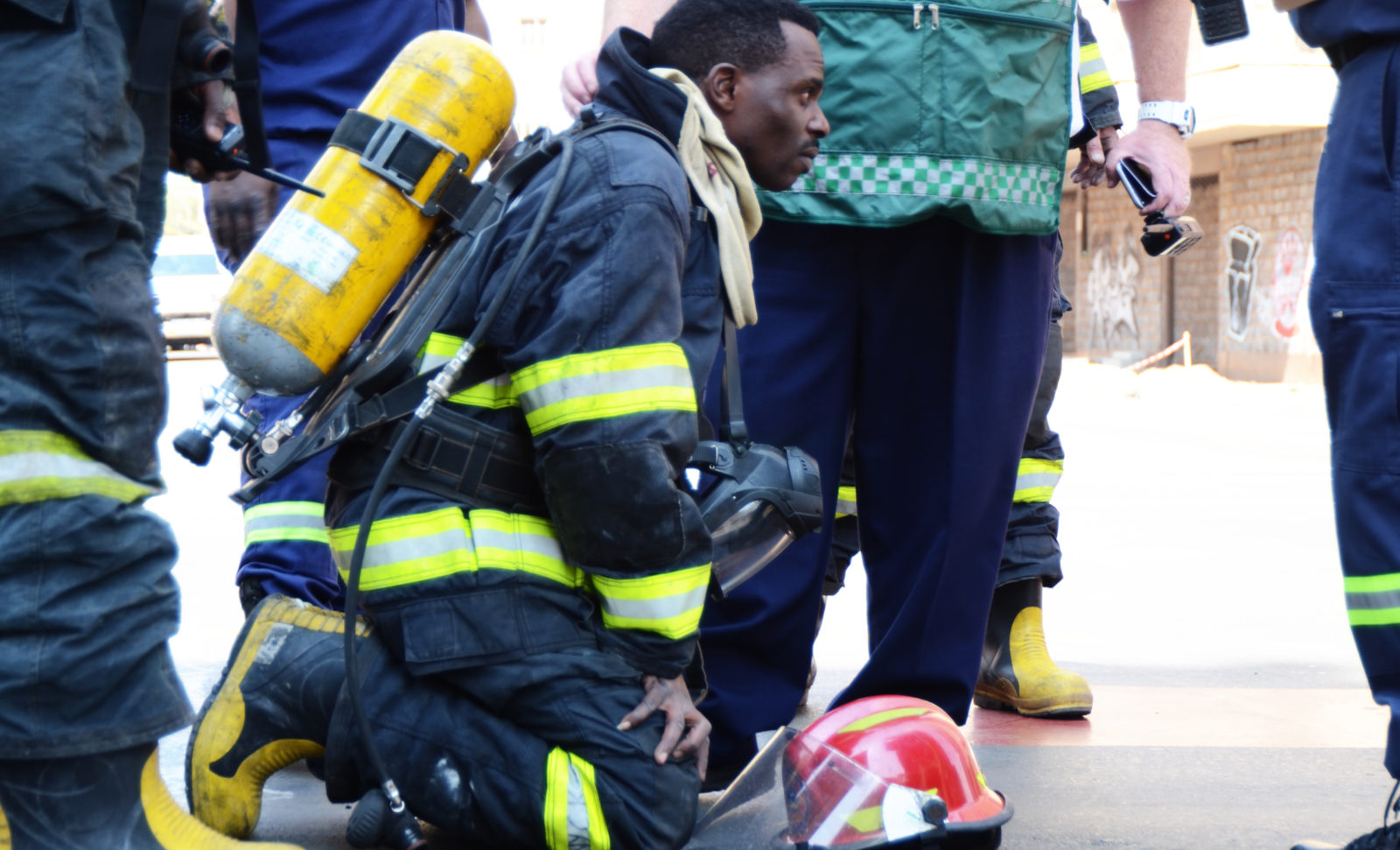 Photo:Firefighters try to extinguish fires at a building on September 05, 2018 in Johannesburg, South Africa. Three firefighters were confirmed dead when a blaze broke out in a building which houses three provincial departments in the Johannesburg CDB. (Photo by Gallo Images / Sowetan / Mduduzi Ndzingi)

A fire that engulfed the top floors of the Bank of Lisbon Building in the Johannesburg CBD continues to rage, forcing city authorities to call in reinforcements from Tshwane and Ekurhuleni. Three firefighters have died and several others have been taken to hospital to be treated for smoke inhalation and exhaustion.

Local and provincial politicians have gone on the offensive as a fire at the Bank of Lisbon Building in Johannesburg, which housed the departments of health, human settlements and co-operative governance and traditional affairs, continues to burn.

City major Herman Mashaba called on the media to hold leaders accountable for the conditions that their employees worked in. He said the conditions inside this building were not unique, adding that there were others in even worse condition.

On Wednesday, Gauteng MEC for infrastructure development Jacob Mamabolo revealed that the building, which at any point had about 1,100 people in it, was only 21% compliant with safety regulations.

“The building simply does not comply with safety and health regulations. Government officials will stay at home until there is a safe building to relocate them to,” Mamabolo said.

There were seven other buildings in a similar state.

Arriving at the scene on Thursday afternoon, Gauteng premier David Makhura said he was “more than ashamed”.

Speaking to TimesLive, Arthur Mqwa, Johannesburg’s fire chief, said the fire is spreading to other levels through ducts filled with paper and boxes.

“The fire spread through the ducts to the 16th floor because there were papers and boxes in those ducts… What I am trying to say is that the building was not sealed. It did not comply with the [emergency services] bylaws‚” said Mqwa.

Investigations into the cause of the fire will begin once it has been extinguished.

Mashaba said the fire needed to be extinguished before forensic experts could move in.

On how the City was addressing challenges encountered by firefighters, such as shortage of vehicles – Johannesburg only has 14 operation fire engines – Mashaba said it was unfair to expect his government to address all the City’s problems at once because they were a new government.

Mashaba said the City was making headway in rolling out the Inner City Development Plan and the City was working with the courts to get court orders in order to better manage the buildings in the inner city.

Makhura and a provincial team met with the families of the three firemen who died with relatives expected to formally identify their bodies later in the day.

Two of the firemen died after running out of oxygen while fighting the blaze on the top floors of the building. The third died after falling from a ledge. The identities of the men were to be formally released on Thursday afternoon.

Officials at the scene on Thursday said it may take three days before the fire was completely extinguished, adding that the dry, windy conditions in Johannesburg were not helping.

Firefighters from Tshwane, Ekhurhuleni and OR Tambo metros were dispatched overnight to assist in fighting the fire.

Dikgang Uhuru Moiloa, MEC for Human Settlements and Co-operative Governance and Traditional Affairs, said they had roped in other municipalities to increase capacity.

Of great concern as the huge fire rages on is the structural integrity of the building.

Meanwhile, the Democratic Alliance has released a statement calling for the resignations of MECs who failed to prevent the deadly fire.

“We call on Infrastructure Development MEC Jacob Mamabolo and Health MEC Gwen Ramokgopa to take accountability for their failure to heed multiple warnings that the Bank Of Lisbon building was a health hazard and (that) staff should have been moved elsewhere.” DM