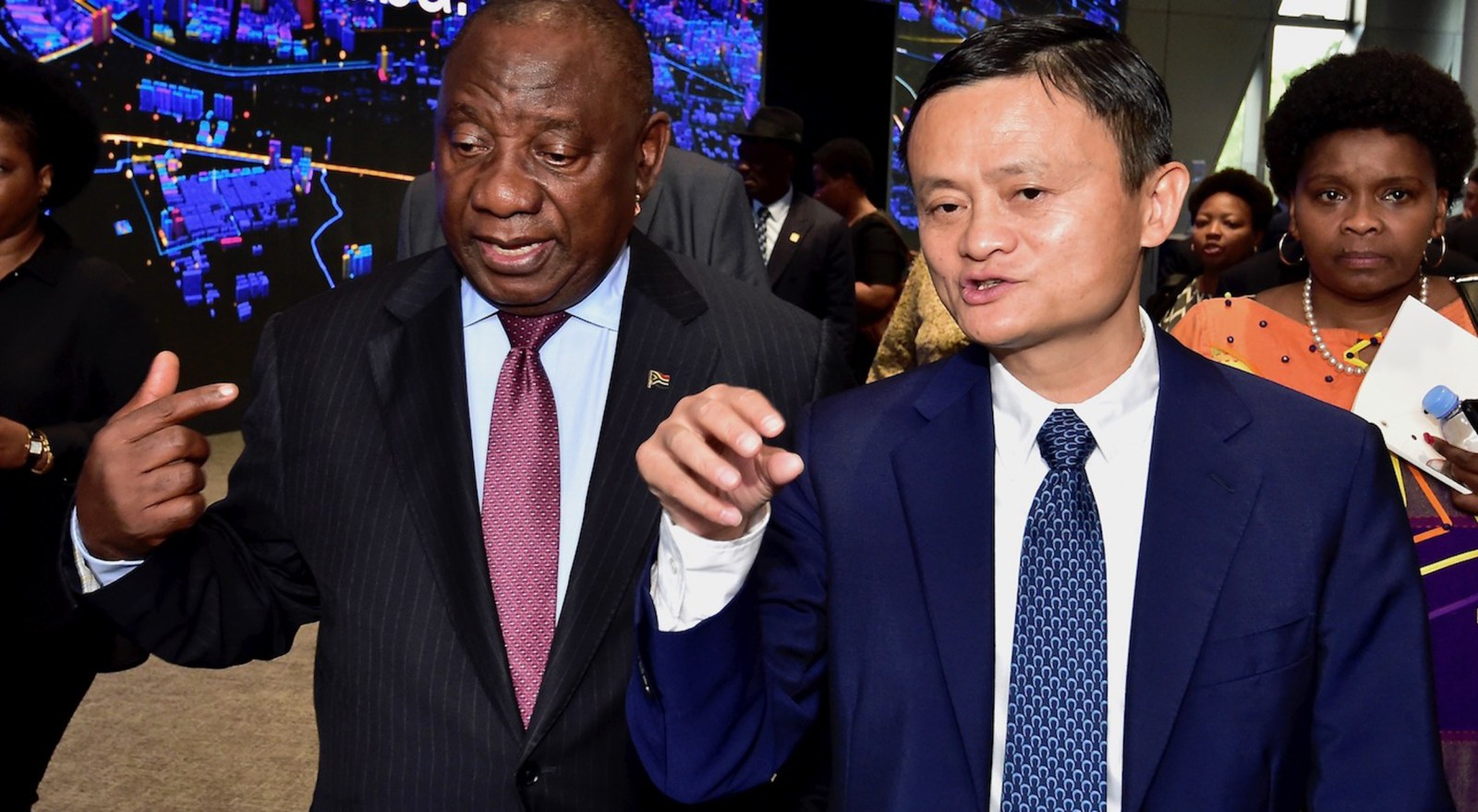 President Cyril Ramaphosa and magnate Jack Ma tour the exhibition centre Museum of the Alibaba Group where the history, culture, mission of the Alibaba Group and its major business units are on display. The President was in China to attend the 3rd FOCAC summit in Beijing which concluded on 4 September 2018. #SAinChina #aBetterAfricaBetterWorld, 05/09/2018, Elmond Jiyane, GCIS

The ANC has doubled down on its proposed economic stimulus package after Stats SA said the economy is in recession. Critics believe President Cyril Ramaphosa is all talk and no implementation.

Hours after the unemployment rate rose to 27.2% in August, President Cyril Ramaphosa appeared on SABC to address the nation. The ANC wanted to implement a stimulus package to boost economic growth and reduce unemployment, he said, controversially speaking as an ANC leader rather than the country’s first citizen.

The ANC doubled down on its stimulus plans on Wednesday after Statistics SA announced the economy has fallen into a recession after GDP had declined for the second consecutive quarter.

Ramaphosa has been in Beijing at the Forum on Africa-China Co-operation this week and it was up to the ANC’s subcommittee on economic transformation chairperson, Enoch Godongwana, to address the latest economic crisis.

“The technical recession is a result of a prolonged trend of slowdown in economic growth,” said Godongwana, pointing out the obvious in a statement on Wednesday. “We have an aggregate demand problem.”

He reiterated the ANC’s recent position to take “immediate, concrete and bold steps to lift the rate of growth and its inclusivity by activating macro-economic policy tools, institutional efficiencies and specific sector interventions as central instruments to mitigate the effects of a contraction in economic activity.”

“This requires that there be a significant difference in the aggressiveness and approach through which recovery measures are implemented by government,” he said.

Many of the ruling party’s planned stimulus initiatives are repeated generalisations that lack detail. Macroeconomic policies must be coordinated to boost growth and industries that can create jobs must be supported, perhaps through tax credits, it said.

It said government procurement should focus on local industries and regulatory red-tape should be cut. Godongwana said government should increase maintenance and development on public infrastructure, such as roads, hospitals, schools, housing developments, and water and sewer projects, to increase employment and drive economic growth.

Agriculture, manufacturing and trade has seen two consecutive quarters of negative growth, with agriculture declining 29.2% in the second quarter of 2018.

“These interventions do not necessarily require the development of new policies, but rather the effective implementation of existing ones,” said Godongwana.

“The interventions should be focused on a limited number of priorities, to ensure that the committed resources are utilised effectively and efficiently.”

Ramaphosa has focused on wooing investors since he was elected in February, regularly announcing new deals signed with foreign governments. Summits on investment and jobs are due to take place soon.

According to reports, the stimulus package could cost the cash-strapped government R43-billion. The funds are expected to come from re-prioritising the current budget and details will likely be revealed in October’s medium-term budget policy statement.

“There has been no fundamental change to the ANC’s approach to the economy. Corruption, policy incoherence, crumbling SOEs, lack of investment, and unstable governance continues to produce economic instability and rising unemployment,” said DA leader Mmusi Maimane.

Maimane has written to National Assembly Speaker Baleka Mbete requesting an urgent debate on the ailing economy. He called on voters to remove the ANC in the 2019 elections.

IFP spokesperson Mkhuleko Hlengwa said Ramaphosa has failed to change the economy and offered “nothing but statements of intent and placatory remarks”.

“We have been down this road before and quite clearly the ANC has run out of ideas and has now once again tanked our economy back to the levels of the 2008 global economic crisis,” said Hlengwa.

The EFF and trade union federations said the current economic system is flawed and will continue to fail unless it is radically changed. EFF spokesperson Mbuyiseni Ndlozi dismissed the “Ramaphoria” that followed the president’s election.

“The idea that you can grow the economy because you feel good about the person occupying the presidency and yet, he has not proposed any radical changes to the economy [and] instead has called for endless summits, demonstrates the degeneration of thinking both by private sector and government,” said Ndlozi.

“The ANC has allowed the economy to degenerate at the hands of a greedy private sector and placed faith in the so-called markets when it is evident that their interest remains profiteering at all cost,” he added.

“South Africa is not better under the Ramaphosa-led ANC than it was under the Zuma-led ANC, except renewal of neoliberal forecasts that are misguided and shallow,”

Cosatu spokesperson Sizwe Pamla called on government to find “an alternative development strategy” that would see it taking a stronger role in producing goods and services and leading growth through taking control of “the commanding heights of the economy”.

“It is now patently clear that the neoliberal policies based on ‘market forces’ and international competitiveness are not going to solve our economic problems. These policies have seen more and more people sliding into poverty in this country,” said Pamla.

“We are paying the price for neoliberalism, which dictated that we drop trade tariffs and open our economy to the chilly winds of international competition, as Trevor Manuel and Alec Erwin argued during their brief and disastrous spell as the ministers of trade and industry.”

“If this structural crisis is not resolved South Africa will not get out of the low-growth trap which is characterised by the fact that the economy remains the worst legacy of a colonial past,” he added.

Speaking in Beijing on Tuesday, Finance Minister Nhlanhla Nene said the stimulus package was “in the pipeline” but would take time to implement. He said practical moves were being implemented, such as ongoing efforts to finalise the third Mining Charter and considering scrapping the Mineral and Petroleum Resources Development Amendment Bill.

Those efforts are yet to translate into practical action and the Steel and Engineering Industries Federation of Southern African (Seifsa) also criticised government for failing to implement proposed interventions. Seifsa is a key player in the manufacturing sector, which is in decline, but has been identified as crucial to growth.

“Five months into its announcement, the modalities around a R500-million incentive aimed at assisting companies in the metals and engineering cluster is still awaiting finalisation, while businesses are in a quagmire. The laggard translation of policies to concrete implementation plans are a serious cause for concern,” said Seifsa chief economist Michael Ade. DM