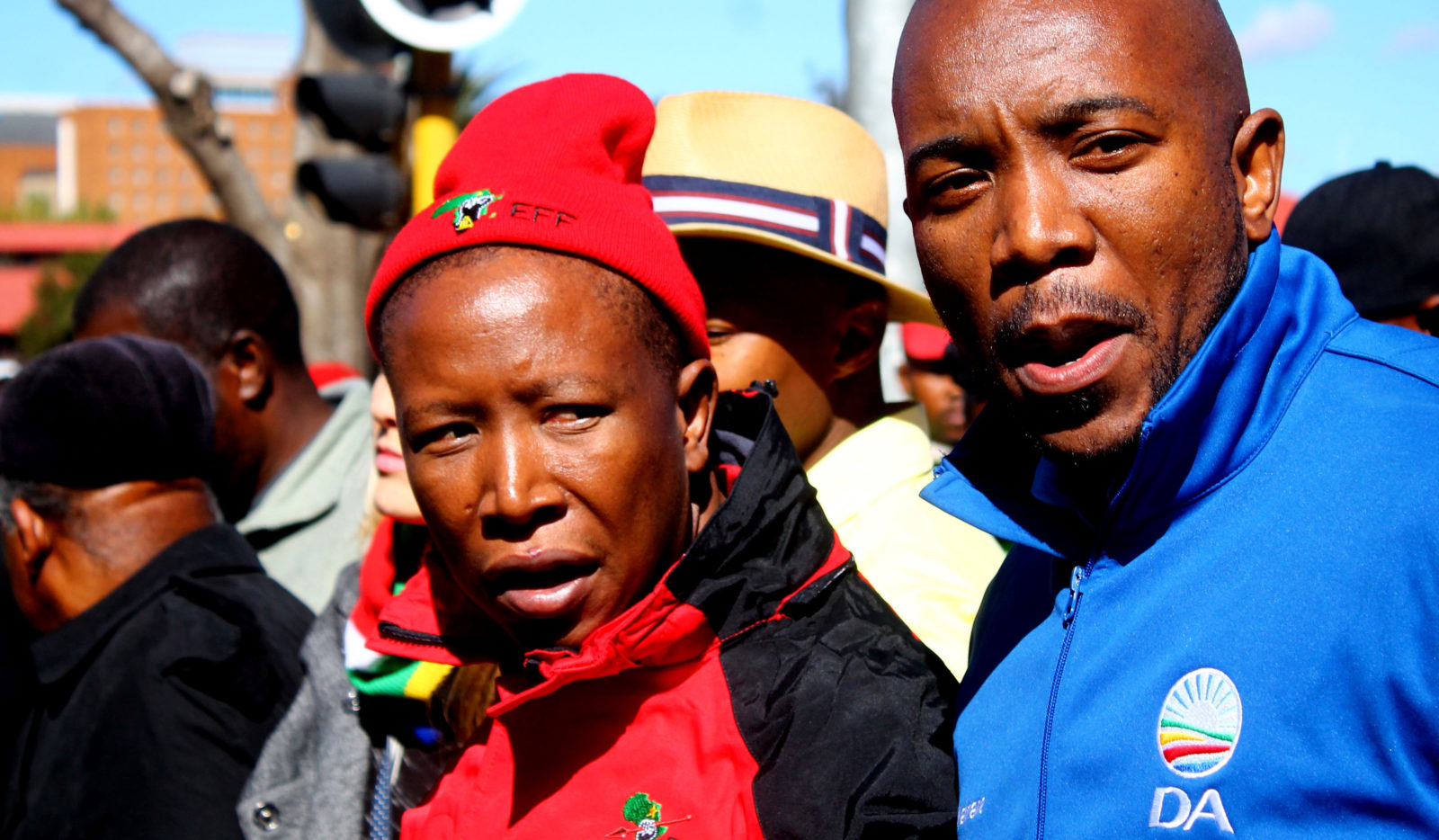 Mmusi Maimane and Julius Malema at Mary Fitzgerald Square during the ‘secret ballot’ march from Newtown to the Constitutional Court on May 15, 2017 in Johannesburg, South Africa. EFF, DA and UDM supporters marched from Mary Fitzgerald Square to the Constitutional Court in support of the court application to have the vote of no confidence against President Jacob Zuma exercised in a secret ballot. (Photo by Gallo Images / Sowetan / Kabelo Mokoena)

Last week South Africa watched a new form of political warfare being played out in our metropolitan councils and it might just prove to be an early preview of things to come.

With mounting consensus that the 2019 election outcome may be far from decisive, now is probably a good time to investigate just where coalitions can lead and ask if South Africa really seems to lend itself to governance through alliances and coalitions.

The 2016 municipal elections yielded no clear winner in three of South Africa’s largest metropolitan councils (metros). The outcome may not have come as a much of surprise to many but it was the moment that the ANC had to finally concede that its political dominance was no longer secure.

To its alarm, the ANC lost control of the country’s capital (Tshwane), its economic hub (City of Johannesburg) and its traditional political home (Nelson Mandela Bay).

With the ANC’s failure in 2016 to secure its usual majority in those metros, and no other political party managing to obtain a legislative majority either, political parties who usually cannot talk in the same room before a point of order is raised were forced to collaborate with each other if they wished to govern.

Enter the era of coalition politics in South Africa. International experience shows us that coalitions are one of the most turbulent and delicate political art-forms, as former foes are forced to become friends (and sometimes former friends become foes). The result is often that power comes first and policy second.

Once the 2016 results were announced, the Democratic Alliance quickly scrambled to secure the coalition partners that would enable it to occupy the mayoral positions and dominate the executive councils in these hung councils.

The Economic Freedom Fighters, after initially agreeing to support the DA’s mayoral candidates, purposively remained independent of any formal coalition agreement, allowing it to swing across the aisle on an issue-to-issue basis. Knowing that the ANC and DA were unlikely partners after years of fierce opposition, the EFF’s refusal to formally take sides placed them in the unreliable but potentially powerful position of king-maker. A shift in their allegiance could result in a complete change of the composition of the legislatures and the respective executives in provincial governments.

Thus the DA, whilst securing the positions they wanted following the 2016 election results, remained vulnerable to switches in political loyalty that could see them relegated back into opposition at almost any time – which is exactly what transpired.

In the first such move, on Monday 27 August, after several failed attempts, the DA’s Athol Trollip was removed as mayor in a motion of no confidence supported predominantly by the ANC, EFF, and the UDM. As is known, Trollip was replaced by the UDM’s Mongameli Bobani, when the UDM was able to wield considerable power due to the necessity of its votes in the numerically tight council.

This is expected to be the first of three hits in the newly conceived partnership’s attempt to finally bring down the DA-led coalitions in the metros.

Attention then turned to Tshwane, but when the EFF’s motion of no confidence in mayor Solly Msimanga was ruled to be procedurally invalid, the EFF staged a walkout – followed shortly by the ANC who knew that any subsequent motion would be defeated without the EFF’s votes– leaving Msimanga to breathe a sigh of relief.

For now. It is likely that the EFF and the ANC will come back for more in Tshwane and will, in addition, set their sights on dethroning the mayor of the City of Johannesburg – the DA’s Herman Mashaba. Between the EFF and ANC alone, they have the numbers to do so.

The question that the DA should be asking itself now is how they let their long-awaited opportunity to govern slip through their fingers, and back into the hands of their political enemies.

The mind boggles at the thought of exactly what discussions were had and incentives offered behind closed doors. But clearly the DA has failed to secure the enduring loyalty of the political partners that they gained in 2016.

Comparative research shows that there are many reasons why smaller parties may reconsider and turn their backs on their larger coalition partners. Internationally, when coalitions break down, one often observes that the largest party in the coalition has shown a tendency to undermine and dominate its smaller partners. Whether this was the reason for the withdrawal of support for the DA is unclear. However, what does seem clear is that the DA has, at times, mistakenly regarded the coalition government as a DA government. It has attempted to pass off the successes of the coalition government as successes of its own, conveniently forgetting that without their coalition partners they would probably not be in government in those metros at all.

Another reason for a coalition failure appears to be a fundamental breakdown in consultation, decision-making and dispute resolution procedures which are a necessity to create an enduring political partnership.

In countries where coalitions are common and have become entrenched in that country’s political culture, we see these partnerships being founded upon long and detailed agreements which outline not only the policies which the coalition will adopt but also and perhaps more importantly detailed structures for consultation, decision-making and dispute resolution.

Yet, after the 2016 election, it seems that the priority was placed on government creation rather than government survival and longevity. A clear and common understanding among coalition partners appears to have been lacking; even their statements to the media and others have not been consistent.

The DA’s response to this week’s events, other than their usual filing of court papers, has been aggressive political rhetoric which suggests that the returning of the metros to the ANC is somehow undermining the will of the electorate.

Their reasoning appears to be that the 2016 election results showed that the will of the voters was that the ANC be removed from government. If so, then this very same logic applies vis-a-vis the DA. The fundamental rationale for a coalition is that no single party won the elections. Neither the DA nor the ANC won the right to govern those metros and both must entice political partners to participate in government. If they cannot do that then they cannot govern. The one who wins is usually the one who offers the best incentives and rewards to junior coalition partners. It might be useful for larger parties who are not majority parties to remember that.

The DA may very well be right when it says that the motive for this week’s long expected political U-turn is simply political power games. However, this is not uncommon, nor is it inherently objectionable. Worldwide studies of coalition politics show that alliances are often built more on political expediency than ideological alignment. If a common policy objective was a necessity for political co-operation, the DA would never have entertained coalition talks with the EFF in the first place.

The acquisition of power is a fundamental and necessary objective for a political party. A party’s best intentions for the people are of little consequence unless coupled with the power to implement them. The good news for the DA is that the new political partnership which ousted it is founded on similar grounds to that which had first placed it in government. A political partnership founded on expediency and a power motive is always susceptible to breakdown. In fact, it is hard (indeed, irresponsible) to suggest that the ANC, EFF and the UDM have formed a new coalition. They have simply collaborated in an attempt to remove the DA from government in certain cities. Once again there appears to be no common and detailed understanding on how they will manage their relationship during the new government’s terms of office.

The DA may well be advised to accept defeat in the metros, lick their wounds and refocus their political rhetoric on emphasising the service delivery that they attempted to bring during their spell in government, which still stands as one of their strongest electoral tools.

Just as we saw between the DA’s original coalition partners, a power struggle is likely to emerge between the ANC and EFF, which could be even more divisive and destructive than those we’ve seen during the term of the so-called “DA-led coalition”. Coalition partners are always evaluating their positions, calculating whether they could be better served by placing their allegiances elsewhere. It will not be long before the DA once again becomes a viable coalition partner for either the EFF or the ANC.

But it does beg the question, who do they serve? The parties involved or the people who voted for them? With deadlocks, in-fighting and political turbulence, the electorate may be the ones that ultimately suffer. DM

Mike Law is a political and legal researcher and analyst. He has researched and written extensively on coalition politics and is the project co-ordinator of the ongoing initiative “Political Party Co-Operation and the Building and Sustaining of Coalitions” which seeks to enhance the capacity of South African political parties in coalitions by drawing from worldwide expertise.