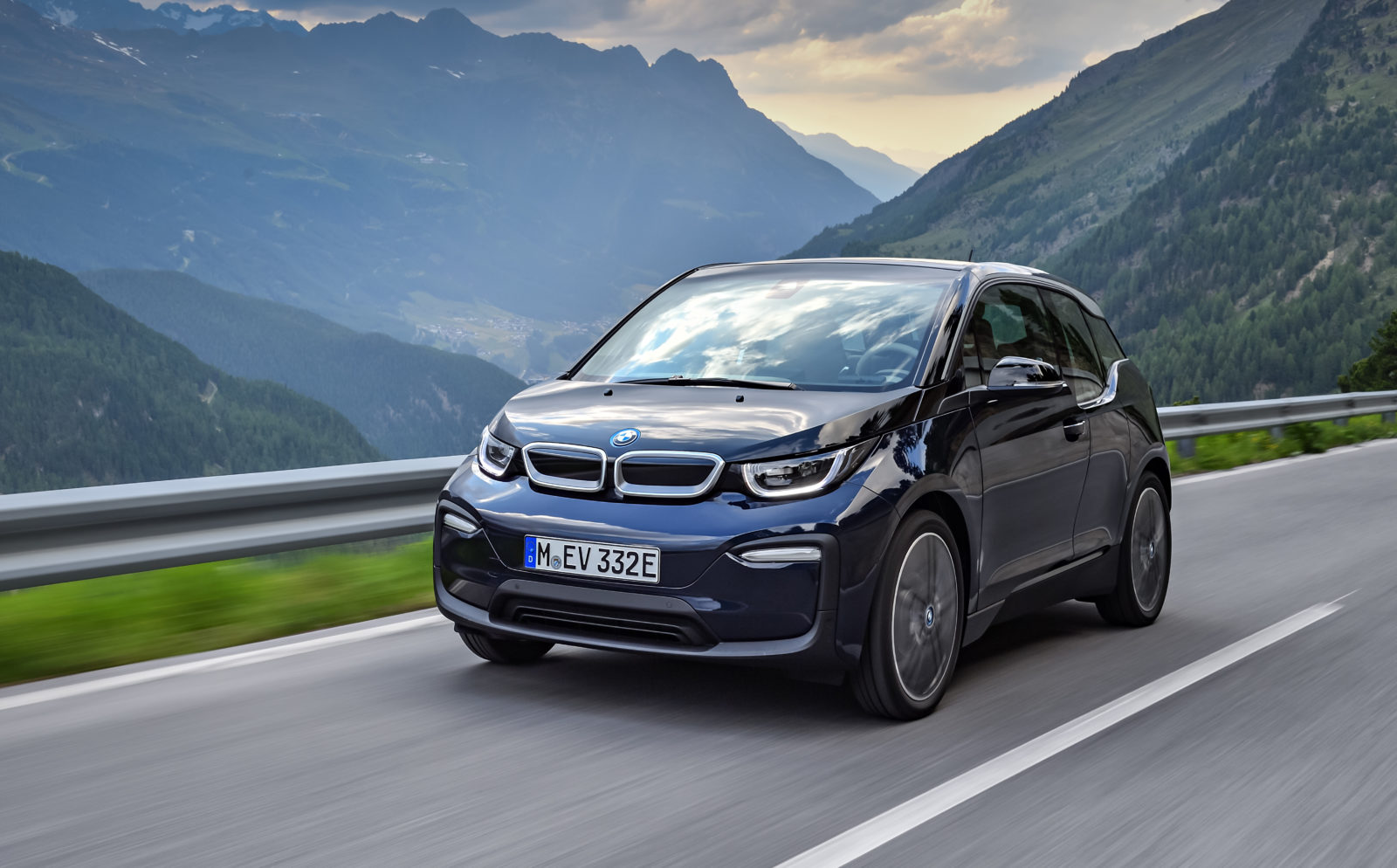 The first-generation BMW i3 was a daring and pioneering exercise in all-electric, sustainable motoring. But it was hampered by a poor operating range. Recently updated, the latest version gets better batteries to address that issue. Is it enough to make it a viable motoring option?

Long before electric cars transcended the realms of fantasy and entered motoring reality, BMW’s i3 city car previewed an electric motoring future which, at the time, seemed entirely feasible.

Across the Atlantic, Elon Musk’s Tesla was already making battery-powered waves of its own, but the i3 focused on more than electric energy: its entire concept and construction was founded on a model for sustainable motoring.

So, while it was powered by an emissions-free electric drivetrain, it also featured a lightweight carbon fibre-reinforced plastic (CFRP) platform, and sustainable cabin materials such as recycled plastic, bamboo, hemp and unstained wood. 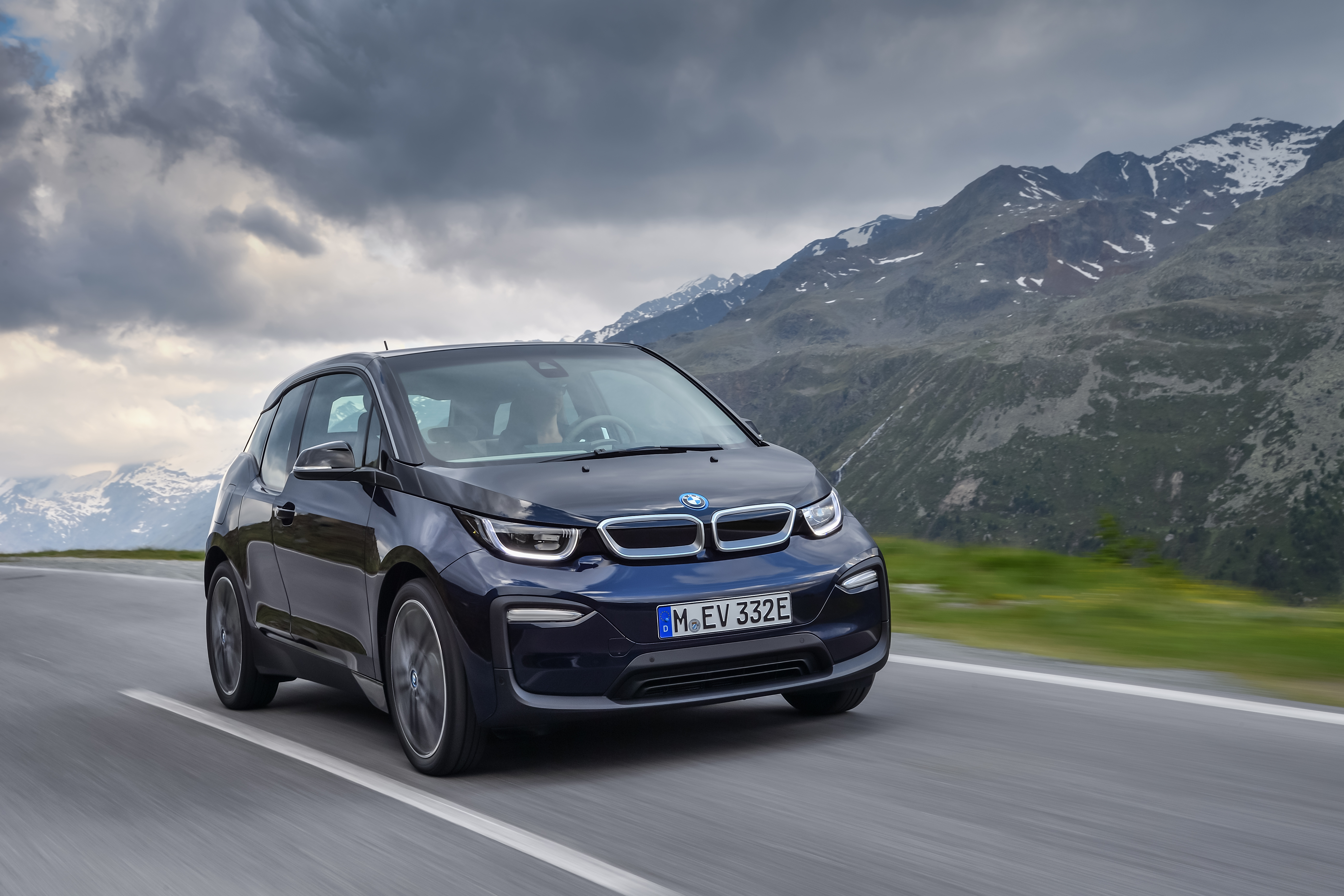 Recyclability was high on the agenda, as was the need to link a compact footprint to ample interior space, despite the presence of bulky batteries.

To its detriment, the i3 was introduced at the same time as the space age-spectacular i8 sports car, which linked futuristic styling to a plug-in hybrid drivetrain, and promised both rapid motoring and limited all-electric operation.

Compared with its glamorous i8 sibling, the i3 looked positively dumpy, even if its more pragmatic design was equally innovative and forward thinking. But its greatest handicap had nothing to do with aesthetics. 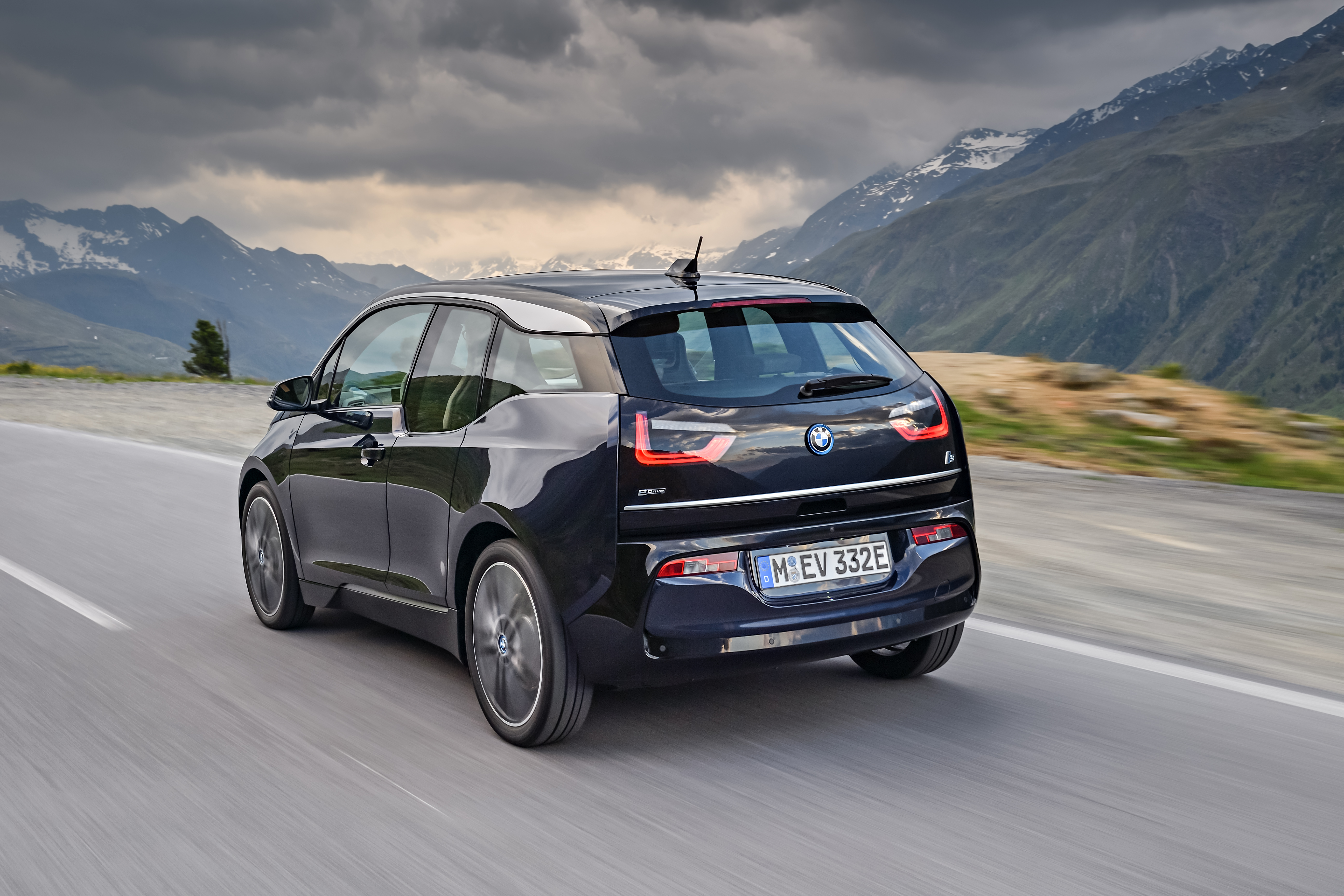 No, what literally held the i3’s wider adoption back was the battery pack. Those first i3s were credited with a range of 120km — but in reality, you couldn’t hope for more than 80km or so.

That might be far enough for urbanites driving short distances only. But for South Africans, who think nothing of driving the 1,500km from Johannesburg to Cape Town by car — in a day — 80km is laughably restrictive.

Not only that: electric cars ideally require a charging infrastructure that will provide access to high-voltage quick-charge stations in metropoles and at sensible intervals along major routes. Without those, range anxiety becomes a very real affliction. 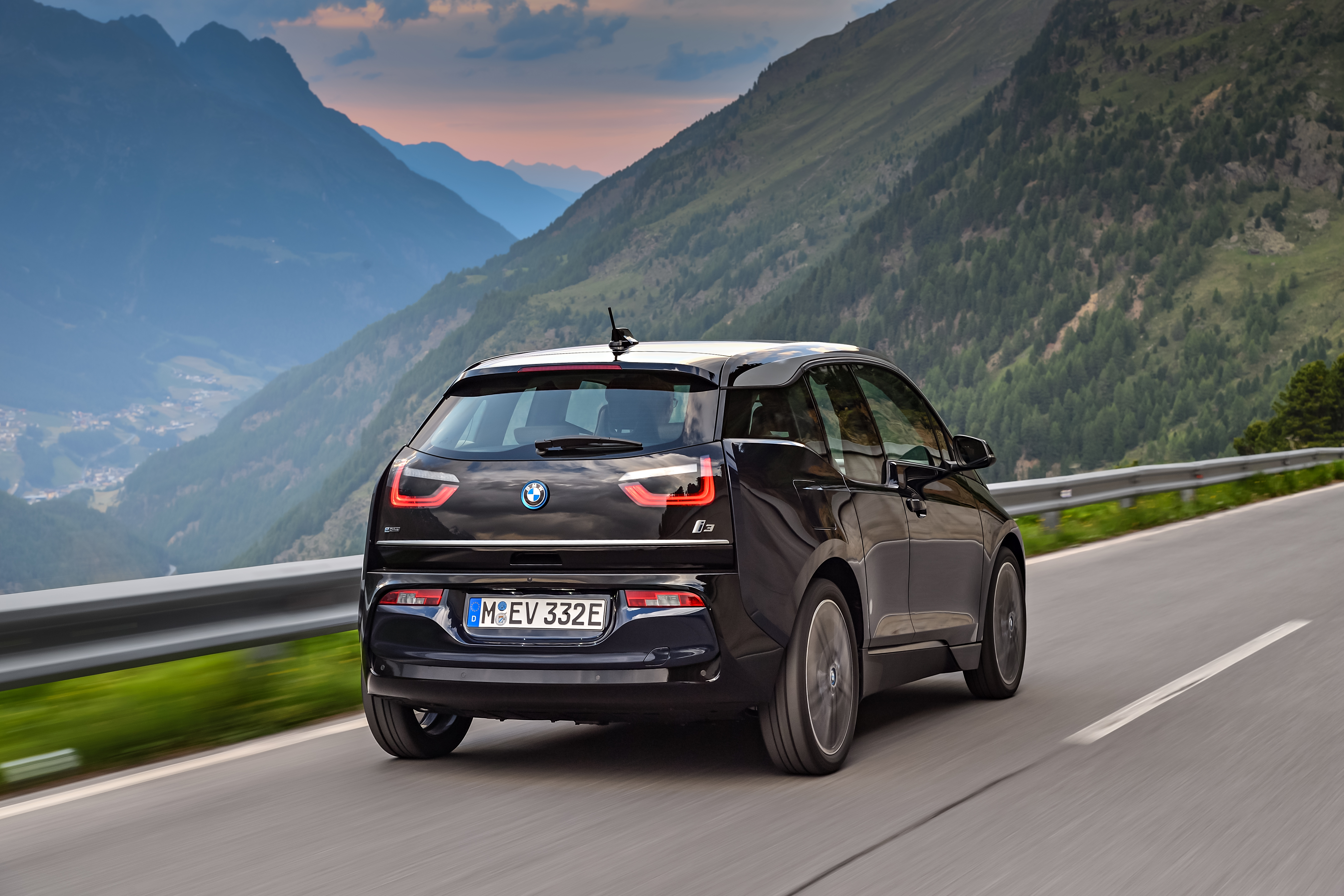 BMW does offer the optional fitment of a small motorcycle engine that extends the i3’s range by charging the battery on the move. But while that provides a safety net, it really compromises the car’s core notion of emissions-free motoring.

The first BMW i3 reached SA in 2014, just as load shedding became a gloomy reality. Add Eskom’s embarrassing reluctance to nurture sustainable energy production, and the concept of a growing electric vehicle population seemed about as likely as a government untainted by corruption.

The good news, though, is that technology continues to improve, and in doing so, can make the impossible possible — or, more pragmatically, allow what seemed unviable before to become a more workable possibility. And so it is with the updated BMW i3. 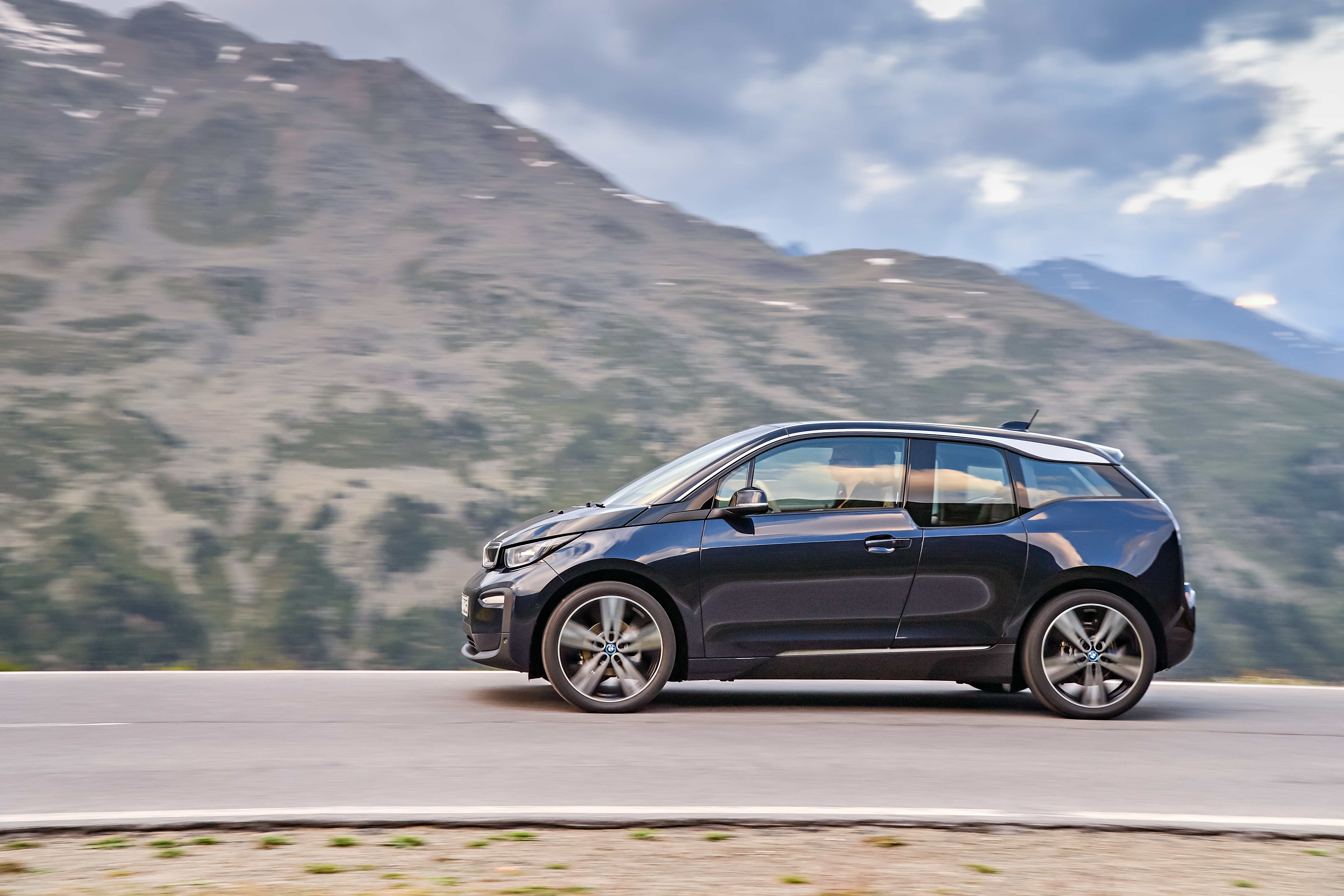 The design and execution of the electric city car haven’t changed. But under that composite, curiously endearing bodywork, technology has allowed the kind of improvements that would allow a car like this to become a useful runabout in South Africa — with some still significant caveats, it has to be said.

Chief among the upgrades is the battery pack, which now offers a 94Ah capacity. That’s allowed the range to be increased substantially to a claimed 280km using the highly optimistic NEDC standard, and a real-world range, at least in my experience, of a not too shabby 180km.

That extra 100km range makes a huge difference to everyday driving, while opening up capabilities and destinations just not possible in the original i3. It also addresses range anxiety more emphatically than any little electric motor ever will. 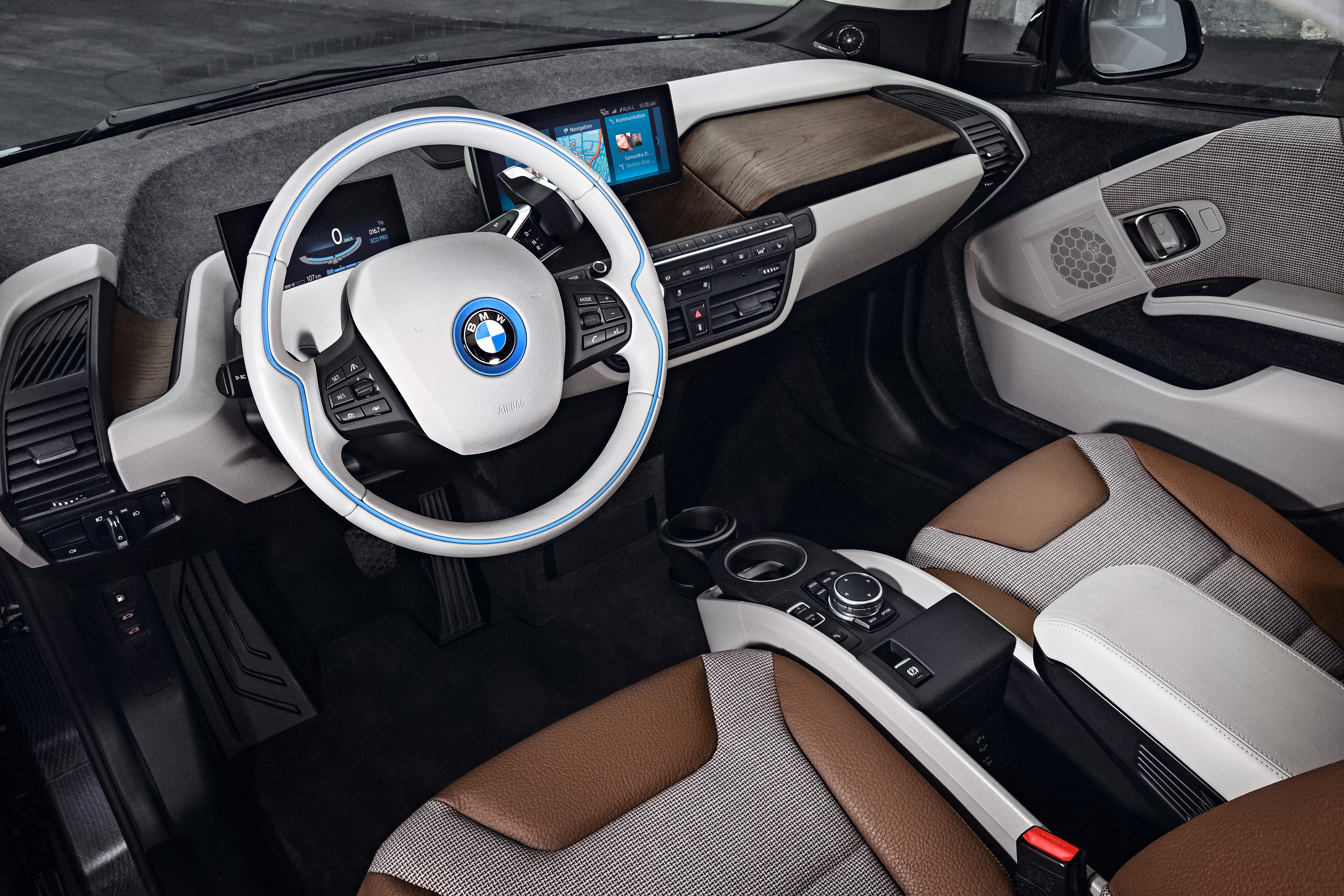 Apart from the batteries, the updated i3 gets an improved stability and traction control system that better manages power delivery to the rear wheels. There’s also an upgraded operating system, linked to improved software that includes app-based control of key features via BMW’s Connected services.

The exterior changes are subtle, and are cosmetically limited to a revised two-tone colour scheme, refreshed front and rear aprons, and the incorporation of full LED headlights and turn indicators.

The shape is still proportionately tall, making the front-on view seem narrower than expected — an illusion further underlined by the relatively skinny, high-efficiency tyres. Short overhangs, big-diameter wheels and a sloping roofline endow the design with at least dynamic appeal, however.

The interior, although largely unchanged in layout and configuration, remains refreshingly futuristic by conventional motoring standards. The raw carbon grain of the CFRP chassis is proudly visible on the sills, and the natural materials manage to look smart and cutting edge at the same time. 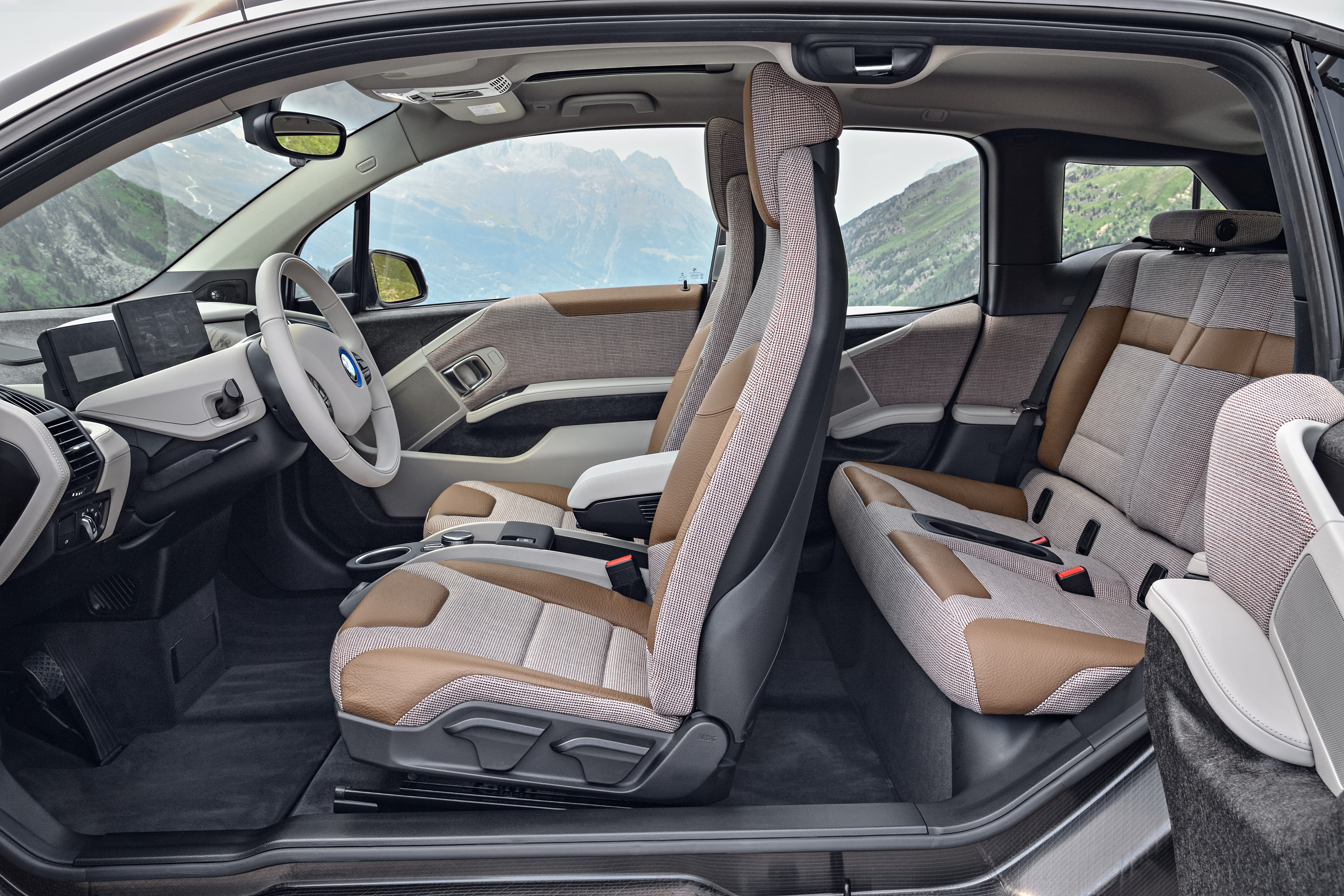 For some, the compressed fibre panels used on parts of the dashboard and the door panels may look unfinished or even cheap, but they suit the car’s sustainability theme.

Because of the absence of a transmission tunnel, the cabin floor is completely flat, while the way the doors open butterfly-style, with no supporting B-pillar, makes for an inviting entry — if not a particularly practical one.

The door arrangement means the front doors need to be opened before the rear doors can be unlatched. And don’t be fooled by the illusion of space: while there is indeed an abundance of headroom, rear legroom is at a premium.

The same goes for the boot, which only manages to offer 260 litres of cargo space. Remember, though, that the entire drivetrain is centred around the rear axle, which explains why even clever packaging can’t completely address the shortage of rear space. 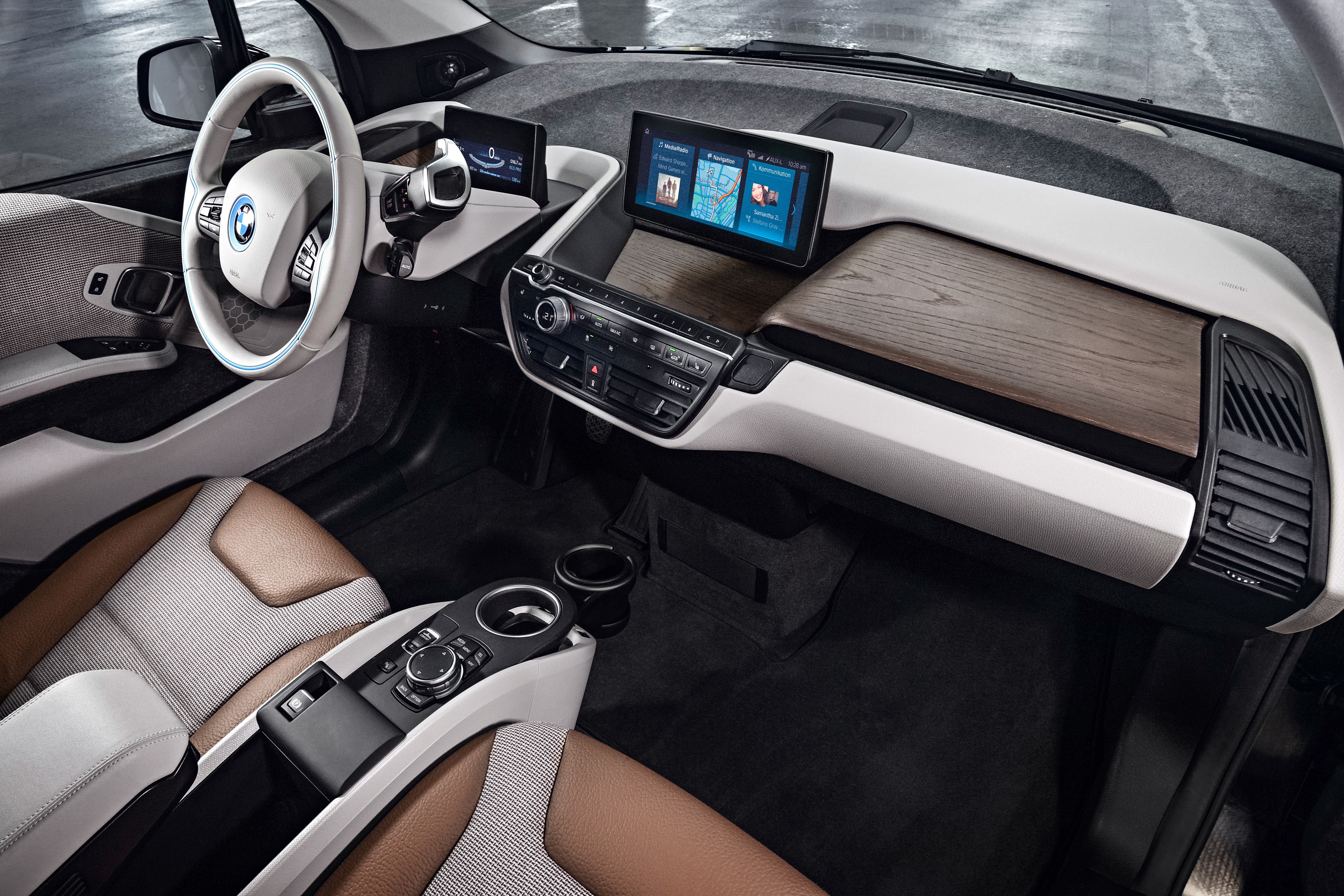 The switchgear arrangement is as elegant as it’s intuitive, and relies on a pair of high-res full-colour displays. located directly ahead of the driver, the first replaces conventional instruments and provides key driving info such as speed, a charge indicator, trip data, remaining range, and more.

The second is a touch screen perched in the middle of the dashboard, linked to BMW’s iDrive control system, complete with voice control. It’s the gateway to the i3’s infotainment system, offering easy access to anything from Bluetooth telephony and optional satnav to car system set-up and cable-free Apple CarPlay integration.

The various functions are grouped together in selectable tiles, and while it’s not unique to the i3 (the system has been adopted, with some variations, on all new-gen BMWs), it suits the electric car’s character to a tee.

As for standard kit, the i3 has everything you’d expect of a premium car: remote central locking, electric windows and mirrors, climate control and more. Of course, you can spend a small fortune on extras, ranging from smarter wheels to full satnav, fancier cabin finishes, and more. 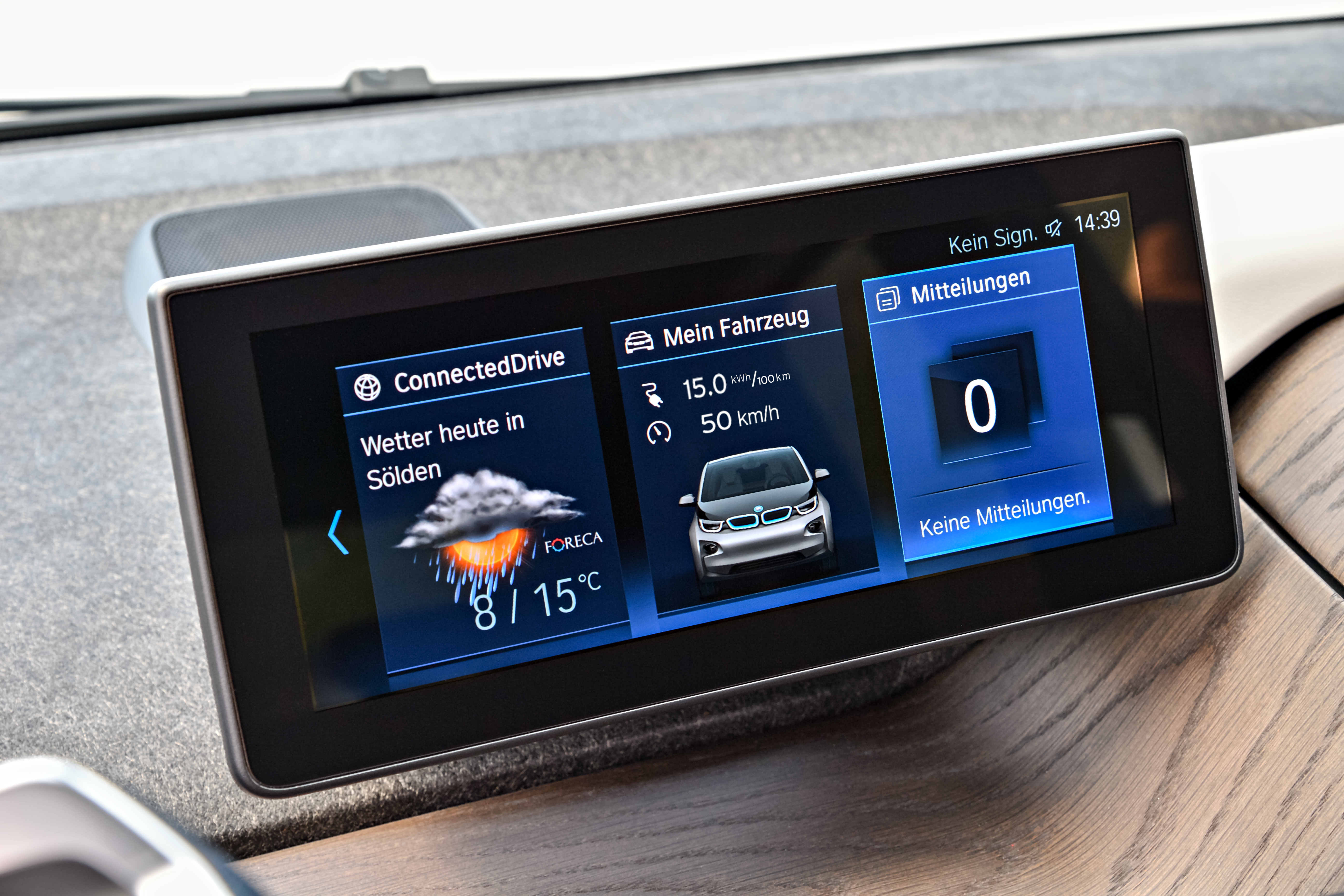 Driving the i3 is a lot more fun than you’d expect. This is not just a fancy golf cart on steroids — and besides, it requires some changes to driving style.

Getting off the mark is almost startlingly quick: torque transfer is instantaneous, and with no wheelspin and no gear changes, acceleration is insistent and sustained. If anything, the i3 feels even faster than it is, and winning the odd traffic light grand prix is well within the electric Beemer’s capabilities.

That it’s accompanied by an almost eerie silence brings a kind of science fiction serenity to the driving experience. Yes, it does tend to highlight wind and road noise that otherwise wouldn’t be a noticeable, but the i3’s progress remains stealthy by normal motoring standards.

Ideally, slowing down needs to entail more than just jumping on the brakes. Because the electric motor acts as a recuperative energy generator under trailing throttle, the more you allow the i3 to be slowed by the motor’s drag, as opposed to actually braking, the greater the charge being directed to the battery. 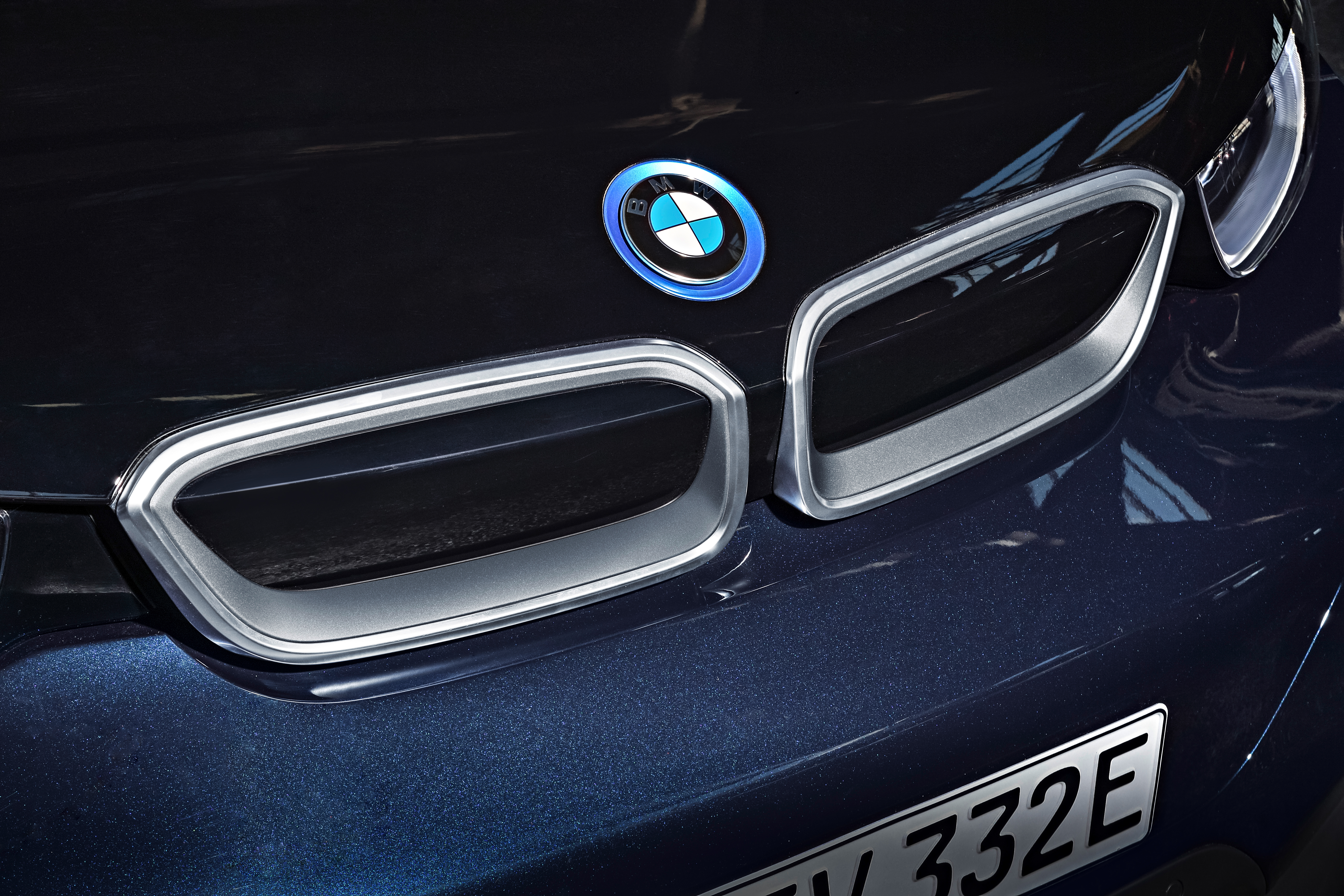 So, every time you come off the throttle, the residual momentum is used to charge the battery, which in turn can significantly extend the range. For instance, a round trip from Bryanston to Rosebank and back yielded so much recuperative energy that the total range had actually increased at the end of the trip.

Minimising braking requires significant pre-emptive planning, though — and motorists behind you won’t always be happy about the i3’s gradual slow-down when approaching a red traffic light, for instance.

The electric BMW’s handling feels different, too. Because much of the car’s kerb mass is concentrated low and towards the rear of the car, turn-in is less emphatic than expected, and the firm ride is emphasised when the rear wheels encounter bumps or dips.

That said, the i3 is agile and manoeuvrable around town, and the relatively high seating position allows excellent all-round vision. On the open road, the steering can feel a little oversensitive, especially on uneven surfaces.

Conventional performance figures are respectable. The i3 sprints to 100km/h from standstill in 7.3sec, while top speed is limited to 150km/h. It happily cruises at the legal limit, too.

However, I did find that I was more economy-conscious in the i3 than in a normal car, and soon learnt to harness that recuperative braking to full effect, while only using the BMW’s zippy acceleration to the full when absolutely necessary.

In line with its futuristic character, the i3 is particularly suited to BMW’s Connected app, which allows remote locking and unlocking, as well as heating or cooling the cabin before departure. You can also use the app to display the exact location of the vehicle, and even activate the hooter.

The app will show details of the most recent trip, and allow a predetermined navigation destination to be sent from the app to the vehicle. As mentioned, the i3 is also fully Apple CarPlay compatible, even without a Lightning cable, allowing on-screen access to apps and services on the linked Apple device. 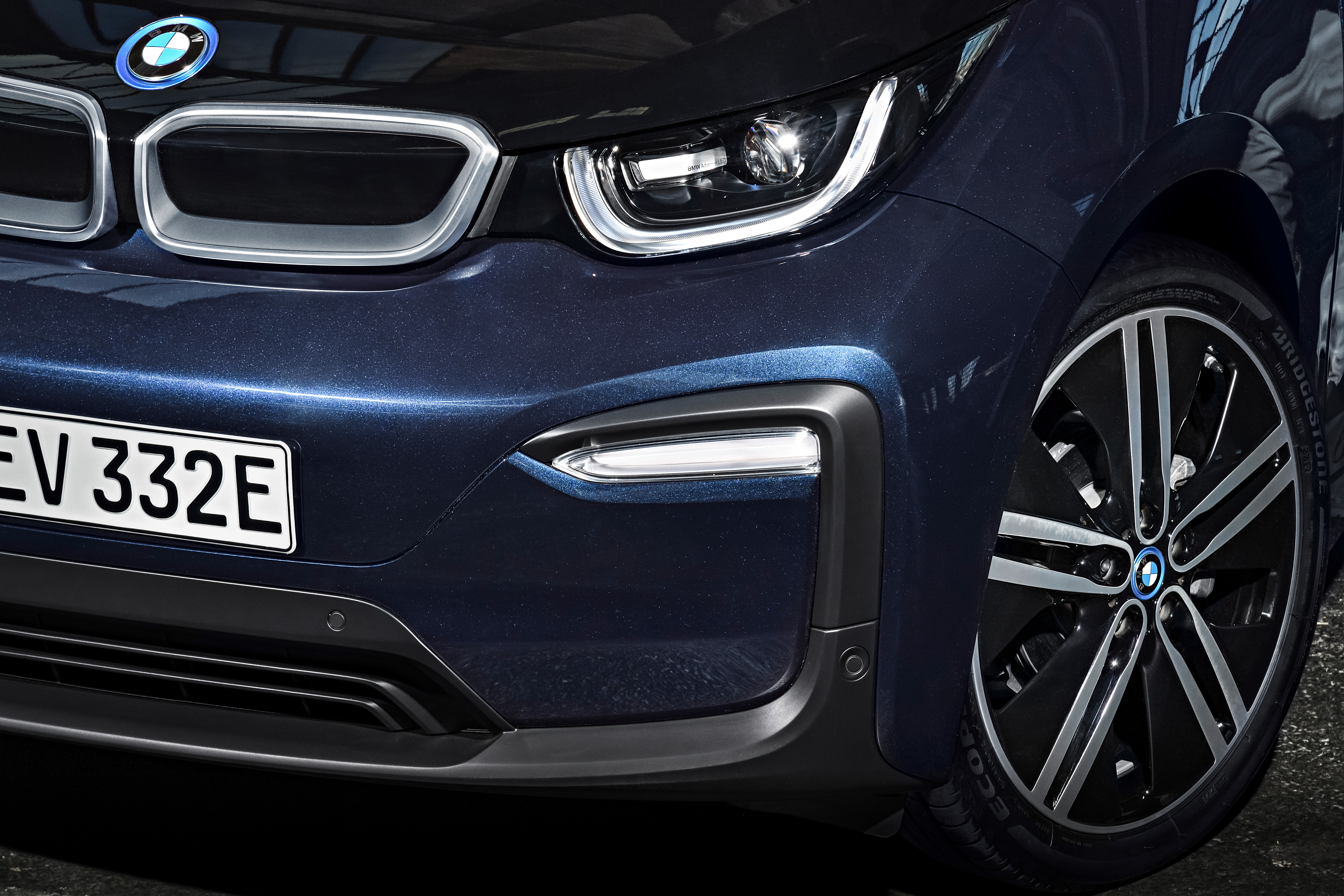 In this latest, improved guise, the i3 is the first fully electric car I’ve driven that actually feels like a viable proposition for everyday urban motoring — and that’s enjoyable to pilot.

It’s still too limited for long-distance touring, though: we’ll need a national network of quick-charge stations to make that possible. It’s also pricey.

At R637,000 before options, you need to be a committed and well-heeled early adopter to warrant taking possession of a new BMW i3. And knowing just how rapidly and exponentially technology improves, chances are that even better electric cars with a longer range are not far off.

Until then, the BMW i3 makes a strong case for electric city cars. And as long as Eskom can keep the grid up and running, range anxiety looks to be a thing of the past… DM

Swift and fun to drive. Extended range makes this a viable all-electric option.