‘Land dispossession is a fact, so where do we go from here?’ 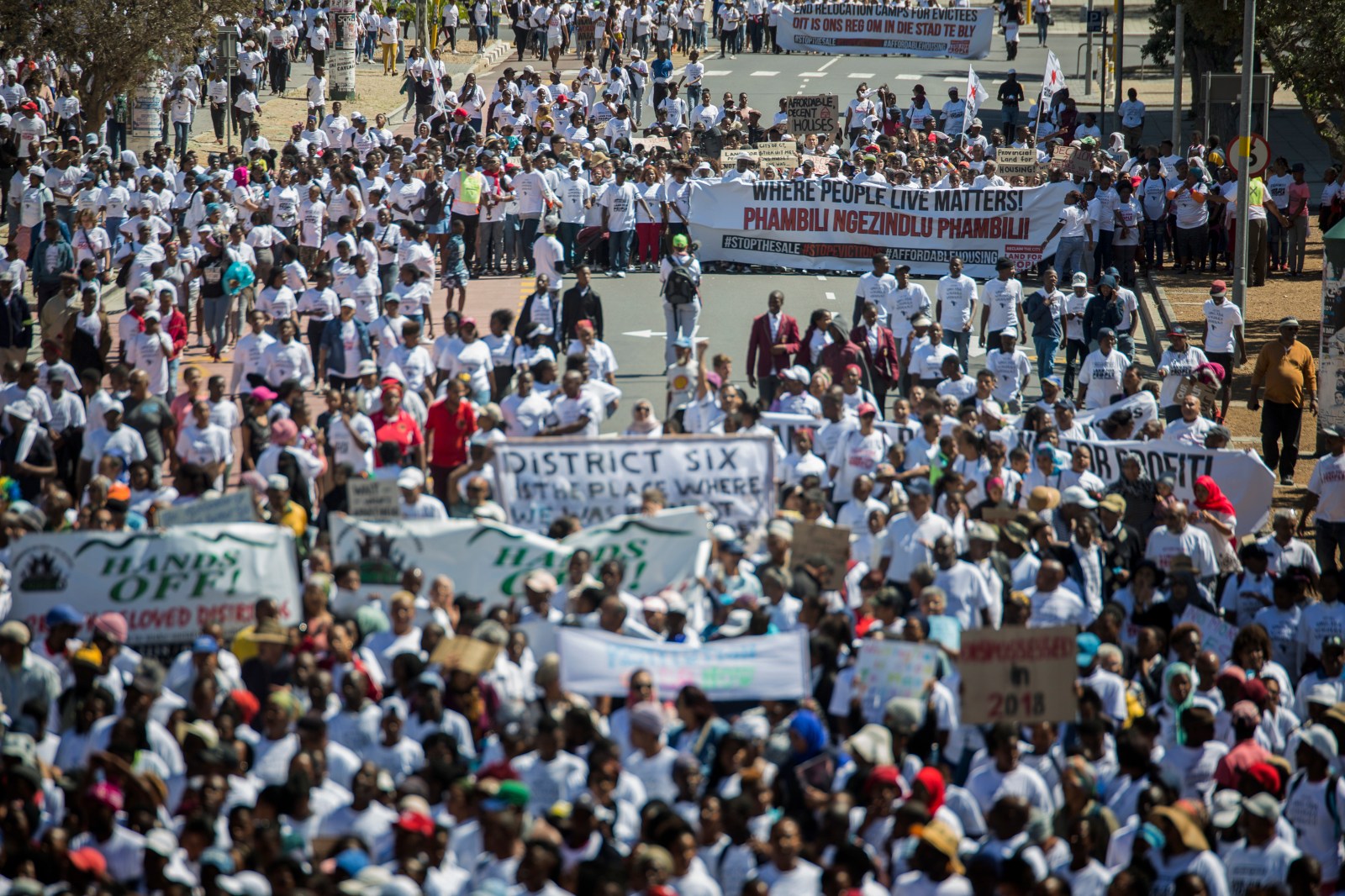 “Let us stop lying to ourselves about it. Dispossession is a fact. And those on the receiving end were those who did not have the vote, people who were Africans, people who were Indians, people who were coloured.” This was how Pallo Jordan entered the vexed land question along with Thuli Madonsela, Kgalema Motlanthe and #feesmustfall student activists during an evening discussion on ways to re-ignite civil society in Cape Town.

Thuli Madonsela, former Public Protector and now a professor at Stellenbosch University, outlined a kindergarten game to an audience at the Institute for African Alternatives in Salt River on Thursday night to explain how inequality is transmitted through generations.

The instructor divided the children up into those wearing blue and those wearing pink. When she blew a whistle the first time the “blues” were allowed to run until they heard the second whistle.

At the third whistle the eight-year-olds were instructed that “everyone should run because you are now all equal. And the pinks start crying and saying this can’t be right; we not equal, the blues are far ahead”. And in fact only the fastest “pink” could overtake the slowest “blues”.

The children were then asked to come up with “just” solutions to this uneven race.

Madonsela did not need to convince the 300-or-so people who had gathered at the meeting convened by the Institute for African Alternatives, headed by nonagenarian former ANC parliamentarian Ben Turok.

She had arrived late – “was flying in a taxi from Stellenbosch” as Turok had explained – so had missed the fiery exchanges earlier about history and the land question. Her fellow panellists, former president Kgalema Motlanthe and the man Turok described as the independent ANC intellectual, Pallo Jordan, had already addressed the gathering, described by Turok as a way to re-ignite civil society in Cape Town.

Jordan, who had spoken about the land question, had evoked a fiery response from some of the students in the audience, notably #FeesMustFall activist Chumani Maxwele.

Jordan outlined, through history, how land had not only been taken from the indigenous majority by force, but how this had been made explicit in the legislation that excluded Africans from 87% of the land: the Native Lands Act of 1913, the Group Areas Act of 1951 and the Pass Laws Act (which tightened up existing laws) of 1952.

“They (the white government) celebrated those victories,” he said. “If you look at the minutes of the 1905 Native Laws Commission, no one hid the fact that they wanted to take the land away from the African majority.”

Laws that targeted coloured and Indian people, such as the Group Areas or the Asiatic Land Tenure Act in 1947, said “shamelessly” that the intention was “to push the Indians out of the good parts of town because they were so effective at business We want to put them somewhere where they can’t compete with whites.”

The “denialism:” and “hysteria” about the land issue today, he described as “quite mind-boggling”.

“The question then must be how does one resolve it…where do we go from here?”

In the anxious wait for Madonsela to arrive, Turok opened the floor to questions. One student in the audience wanted to know why this organisation had not supported students who were arrested during the #FeesMustFall protests. But it was Maxwele who took the discussion to a fiery new level, beginning with a cry of “Amandla!” and “Tata ‘mhlaba” (take the land): “Comrade Pallo helped us very well when he told us the land was violently taken. I propose the way forward is to take the land the way it as taken from us – through violence.”

“We will march to Constantia, and march to Stellenbosch and take back our land. The land must be taken tomorrow and violently.”

Jordan replied that changes had to come within the framework of the law. But he put a compelling case for urgent policy interventions on the basis of history.

Key to the land debate, he had said earlier, was urban land: nearly two thirds of South Africans today live in cities which are still “effectively owned” by the white minority.

“Most of the heated struggles we’ve had in the 20thCentury and since are about access to land to live on in the urban areas. When people protested against the pass laws, they were protesting against the 1913 Land Act… that said that Africans had no claim whatsoever outside that 13% under the control of African monarchs and the chiefs (his term for traditional leaders).”

The anti-pass law demonstrations in Umbilo Road in Durban in 1947 were as much about access to urban land as are the “service-delivery” protests of today.

The main beneficiaries of the apartheid land laws in terms of urban property ownership, white people, would either have to participate in fundamental urban land reform “willingly” or be coerced into doing so by legislation, he said to applause.

Even the spate of corruption and state capture, he traced back to 1652 when the Dutch East India Company effectively set up shop in the Cape to when the first diamond was discovered in Kimberley and “the biggest mining magnate” in the country Cecil John Rhodes became prime minister of the Cape Colony, to the Anglo-Boer War which was over control of the gold fields.

The “democratic political revolution” of 1994 was in many ways an “elite accommodation” but the black elite who took over power were essentially “property-less”.

“Part of the reasons for the purloining of public funds, is attempts by elements of this property-less elite to acquire the means to buy property – and we shouldn’t be shocked by this. This has been the history of South Africa.”

When Madonsela arrived she stamped her usual “sea of calm” approach onto the proceedings, focusing on the dire challenges of the economy – high levels of poverty, youth unemployment and growing inequality. But, unlike Chumani, she paid serious attention to the role of democracy in finding solutions.

One was a call for citizens to monitor expenditure and policy decisions. In one case, a contractor in the North West had been paid R400-million to build RDP houses, and had built a grand total of – one. And, in the now infamous Nkandla matter, money meant for an urban renewal programme was diverted to then president Jacob Zuma’s homestead.

Another was a call for young people to stand for office, as was happening now in the midst of the Trump era in the United States when youthful leaders are emerging in the Democratic Party.

“Mandela warned us that even the most benevolent of governments have within them persons with propensities for human failings and that’s why we have the kind of architecture to protect against that.” But the real guardians of democracy had to be civil society and “we outsourced that to politicians, civil servants, courts and the media.”

She also urged support for whistle-blowers. Referring to the gruelling, and often confusing, two-day testimony delivered by Vytjie Mentor at the Zondo Commission, she said: “If you watched Ms Mentor, you wouldn’t have wanted to be in her shoes. I am not saying whether she’s right or wrong, but really she’s doing what she thinks is best for South Africa. And she’s all by herself.”

Another whistle-blower she’d spoken to was “on the verge of losing her house earlier this year. Businesses would say they don’t want State Capture, but, still, they’d tell her, let’s wait for Nasrec (the ANC’s conference) and then we can decide whether we will employ you or not.”

Motlanthe, in a sober speech peppered with literary quotes, also expressed the bitter betrayal of the democratic project by the extent of corruption. “We find ourselves in a moment when our nation is making slow passage through a time of deep economic and political turbulence,” he said, noting the Inquiry into State Capture “continues to expose the depths of arrogance, impunity, betrayal and corruption that threatened to uproot much of the hard work done in the post-apartheid environment”.

The constitutional vision for the nation was at “risk of being relegated to a mere footnote by those who ran our nation”.

At the end of the meeting, which lasted beyond two hours, it was Motlanthe who made sense of the sweep of history and discomfort with the present in an answer to the vocal students. He relied on another poet to make his point: “History gives us context but we cannot live in the past. The late poet Keoraptse Kgotsitsile always wrote PastPresentFuture as one word – it is always now.” DM