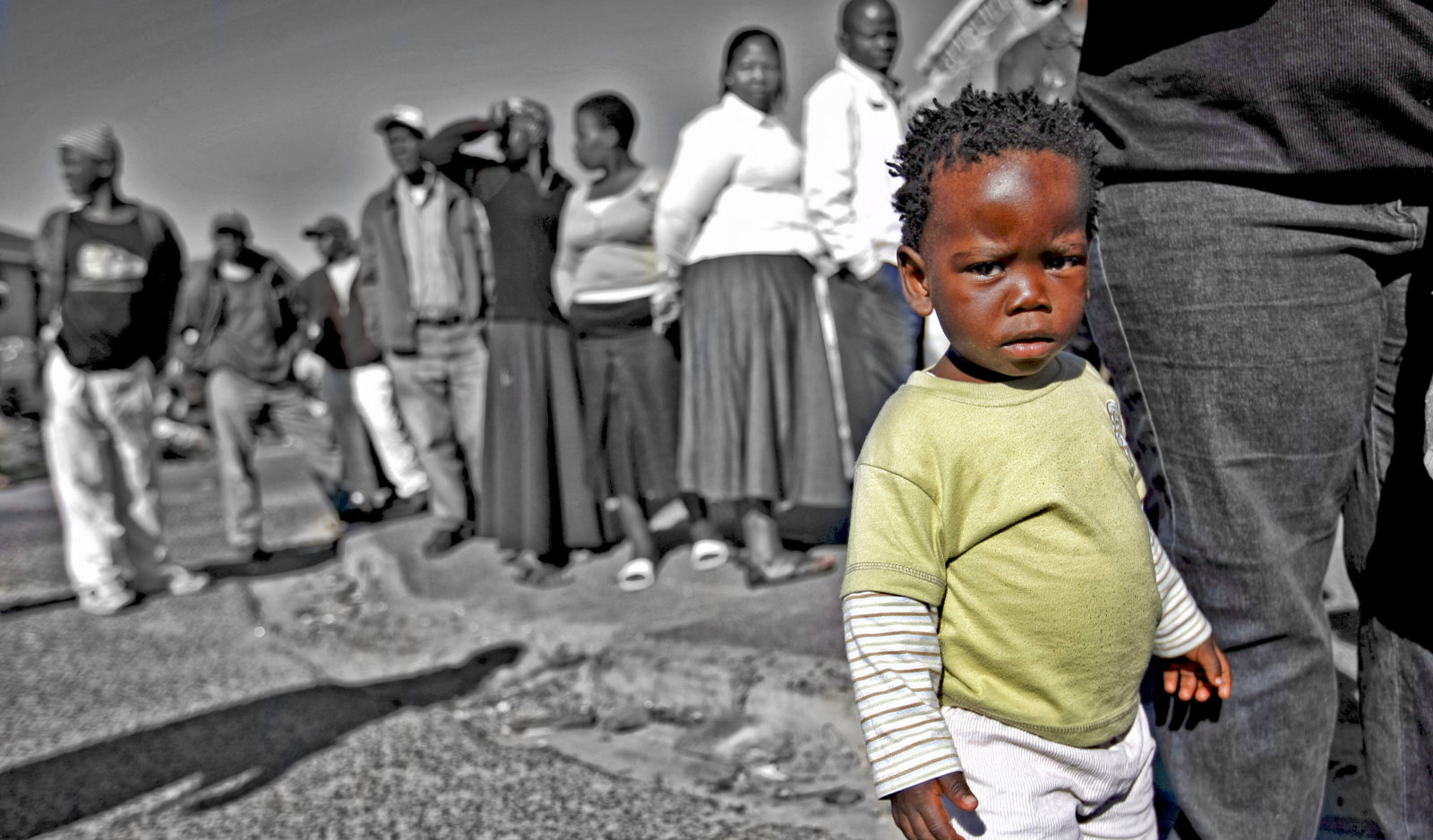 A South African boy stands with his mother and thousands of South Africans as they wait in line outside Gugulethu Social Services office to register for a Social Relief of Distress Grant, Guguletu, Cape Town, South Africa 28 January 2009. EPA/NIC BOTHMA

A ruling by the Constitutional Court on Thursday that Sassa and its former acting CEO, Pearl Bhengu, are jointly liable, in their official capacities only, for costs related to a Sassa application in February 2018 for a further extension of an invalid CPS contract for cash payments to social grant recipients, will ultimately add to the agency’s already bloated over R1-billion irregular and wasteful expenditure bill. In the end it is taxpayers who will carry the can.

While the ConCourt ruling, delivered by Justice Leona Theron, might have let former Minister of Social Development Bathabile Dlamini, Sassa and its former acting CEO, Pearl Bhengu, off the hook personally, it was scathing in its assessment of the parties concerned.

The court found that Sassa, in its application to the court, had not been “candid” (in other words it had lied), had also withheld “information material to the determination of the matter”, and had been serially delinquent with regard to adhering to previous orders of several courts.

Thursday’s judgment is in relation to an application in February this year by Sassa for an extension of the invalid CPS contract to distribute cash payments only as the agency had been concerned that SAPO would not be able to do so, depriving around 2.1 million social grant recipients of their only means of survival.

The ConCourt found on Thursday that while the crisis had been “self-created” by Sassa, Dlamini and Bhengu, they could not be found to have been grossly negligent nor had they acted in bad faith which could warrant a personal costs order.

“The test of bad faith or gross negligence has not been established against the Minister too, in respect of compliance with the order of 17 March 2017 which was issued in Black Sash 2. It will be recalled that in terms of legislation Sassa’s affairs are the primary responsibility of the CEO,” the ConCourt found on Thursday.

But while the daily functions and management of Sassa are overseen by the CEO, this management was still subject to the direction of the Minister, said the court.

“Ultimately the duty to see to it that Sassa attains the objectives for which it was established rests on the Minister. It is evident from the record that the Minister did not apply an effective supervisory role, particularly after it had come to her attention that Sassa had failed to comply with previous orders.”

There was an expectation, said the court, that Dlamini would have demanded that she be furnished with reports at frequent intervals, setting out steps taken by Sassa to carry out court orders and for her “to intervene as soon as it became clear that difficulties which put payment of social grants at risk had arisen”.

Dlamini, in her affidavit, had said she had deferred to the Inter-Ministerial Committee which had been established to provide oversight and ensure compliance.

“It is, however, clear that the duty to give direction to Sassa is imposed on the Minister by the South African Social Security Act. Therefore, the committee established by the President could not relieve the Minister from her statutory duty.”

Dlamini’s deference to the committee was “mistaken”, the court found, but this was “not sufficient that it constitutes bad faith or gross negligence”.

One of the earlier directions of the ConCourt was that Sassa furnish the court with a contingency plan should a seamless transition (from CPS to SAPO) on 1 April 2018 not be achievable.

“Sassa was thus ordered to prepare a contingency plan in November 2017, but we were told at the hearing on 6 March 2018 that the plan does not exist, without any explanation why the directions were not obeyed.”

The court on Thursday said that it was apparent from these directions, read with the obligations imposed by the order of March 2017, that if Sassa had “discharged its obligations diligently and without delay, the uninterrupted payment of social grants could have been achieved. And the need for instituting an urgent application would not have arisen”.

The judgment found that Sassa’s supporting affidavit in the application “did not even comply with the rule to render the matter urgent”.

Sassa had stated that the matter had been put out to tender and that it had needed an extension until then, but the agency itself had delayed the advertising of the tender, only eventually advertising it in January 2018.

There was, said the court, “not even a hint of why Sassa left it until it was too late to approach this court for relief”.

In this light then, the inference that Sassa wished to “force” the court to grant it a further extension, as it had done in 2017, was “irresistible”. Sassa had no contingency plan despite the court’s order on 7 November 2018 that it develop one. Also, Sassa had not mentioned to the court that it did not have such a plan.

“Therefore, not only was the so-called urgency self-created, there are further disturbing features in this case. It is disconcerting that Sassa did not only lack candour and had gone further to suppress information material to the determination of the matter. The issue of the contingency plan was so important to the scheme of things that it could hardly have been omitted from Sassa’s papers, on account of and innocent oversight.”

An extension of a declaration of invalidity “cannot be had for the asking. A proper case justifying the extension must be made out”, the court sniped.

“Despite having been initially afforded a period of three years, Sassa has failed to remedy the defect before the expiry of the original period of suspension. This court was placed in an invidious position last year in March 2017 when it was asked to extend further the period of suspension.”

All in all, Sassa had been afforded four years “to sort out the problem but has failed to do so” and its explanation as to why the extension should be granted was “utterly inadequate”.

“It was neither candid nor complete,” the court said.

Sassa’s affidavits in the matter had also not assured the court that if the extension for six months was granted, “the defect” would be remedied within that period.

The original awarding of the tender to CPS in 2012, the court reminded Sassa, had generated “no less than five cases in this court alone” and that there had been other cases in other courts.

“The uncertainty in relation to whether social grants would be paid must come to an end.”

From papers handed to the court it had been apparent that “the recipients of social grants would be seriously prejudiced by the failure to extend”.

“Approximately 2.8 million recipients could have been affected. These people would not have received their grants if a further suspension of the invalidity was not granted.

“These are poor people with virtually no income for daily financial needs except the grants they receive from Sassa,” said the court.

Stripped of the legalese, this boils down to Sassa, Dlamini and Bhengu using grant recipients as human shields to hide their incompetence and bend the will of the court.

In the end the court had had to weigh the interests of these recipients and “the hardship they could have faced against other factors which did not support the granting of a further extension”.

One of the factors included the “large number of poor people who would have been adversely affected by the refusal; the violation of their rights of access to sufficient food and social security and the fact that grant recipients were not to blame for Sassa’s failure to act diligently and comply with the extended period in the order”.

With regard to Bathabile Dlamini, the court said that in her written submissions she had contended that to hold her personally liable for costs would constitute an impermissible encroachment on the powers of the other arms of government. She claimed that the court lacked the authority “to hold a minister to account by ordering him or her to pay costs out of his or her pocket”.

A judgment is still outstanding with regard to the Section 38 hearing ordered by the ConCourt with regard to Dlamini’s personal culpability for the larger “SassaGate” scandal and the application brought by the Black Sash and Freedom Under Law.

The ruling on Thursday that there was no merit to Dlamini’s argument that the courts lacked authority to hold a minister personally to account is interesting to read in this light. DM

Let our beautiful heritage unite and not divide us

Susan Comrie for amaBhungane • 13 hours ago

Toshan Panday and the many ways implicated people avoid accountability