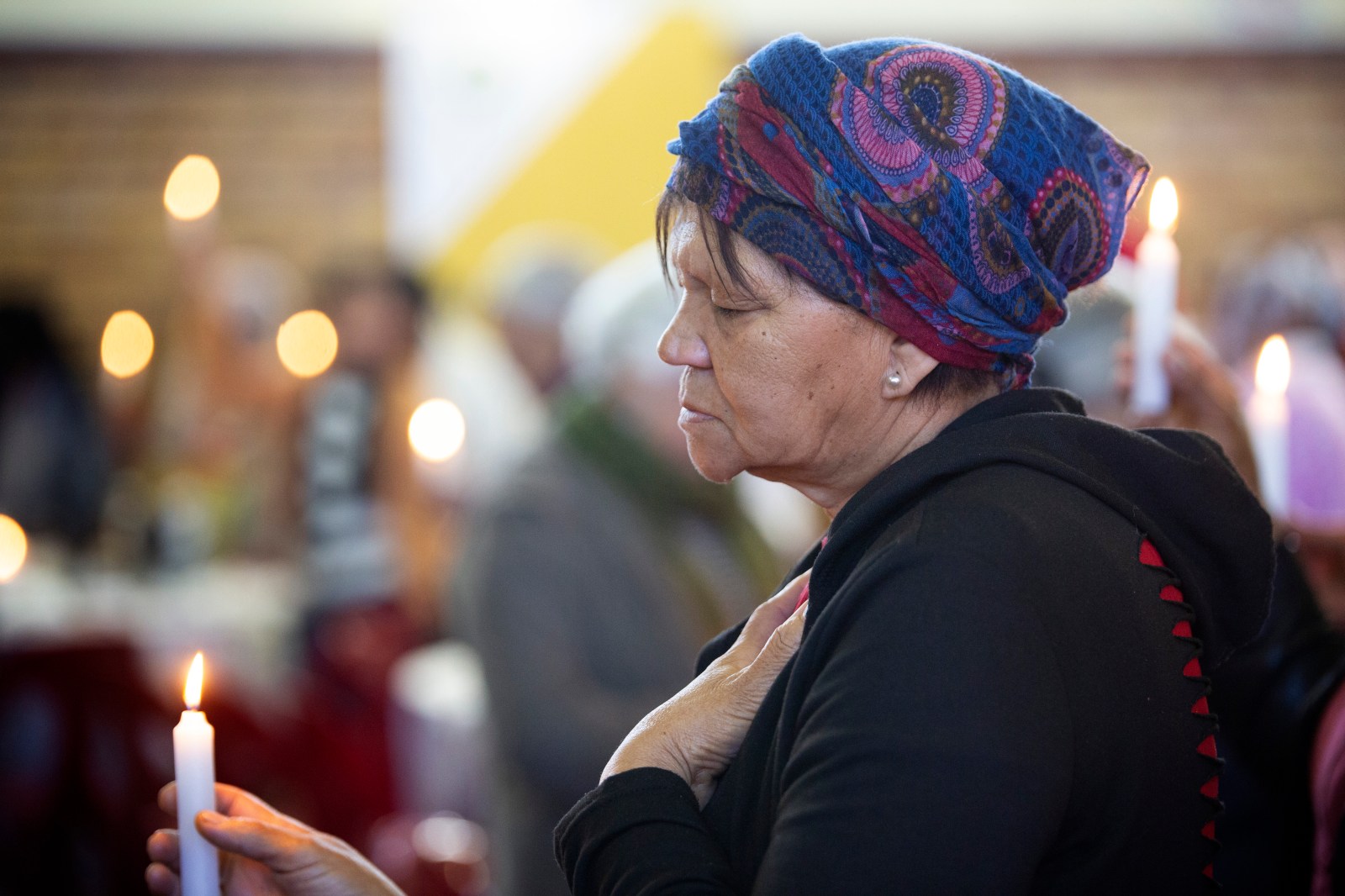 A woman in Hanover Park observes a moment of silence for all those who have been affected by gang violence, 29 August 2019. Photo: Leila Dougan

An emotional service was held in the Hanover Park Civic Centre on Wednesday to commemorate those who have lost their lives to gang violence. Cape Town Mayor Patricia de Lille addressed 200 women who gathered, cried and comforted one another in the large community hall.

About 200 women affected by gang violence gathered in the Hanover Park Civic Centre on Wednesday. Most have lost friends and family members to gang violence and are still searching for healing and hope.

Pictures of sons, brothers and husbands were placed at the entrance to remember those who had fallen victim to violence in their community.

“Our children are being killed with guns. My son was shot 13 times,” said May Classens, whose son was killed three years ago.

“I need to celebrate the life of my son. People say I should get over [his death] but I lost my eldest son and I don’t have to forgive his killers. To the mothers here, I want to say it’s okay to be angry.”

Classens heads Moms Move for Justice, a support group in Hanover Park that once a week provides women with a space to talk about how gang violence has affected them and the trauma they experience on a daily basis.

One of the members of Moms Move for Justice is Washiela Samuels, whose son was shot and killed three years ago. Her grandson, who is now 14, witnessed his father’s murder. Samuels says the teenager is visibly traumatised and the lack of counselling is a serious problem in the community.

“As a mother you are expected to be strong, but there is no counselling. The only place we can go to get trauma counselling is the Philippi police station. It’s a 30 minute walk away and when you get there you may not even see a counsellor. We need trauma counselling for our children, they are suffering,” she said.

De Lille offered her support and sympathy to the women of Hanover Park and urged people to “take back” their community from gangsters.

“These gangsters come from us, they are our brothers and sisters who are killing. We have to ask why, where did things go wrong? We have to ask what is the cause of the problem so that we can get a way forward,” she said.

The outgoing mayor spoke about a “breakdown of the social fabric” and said that forced removals during apartheid had played a big role in the kind of violence seen in communities around Cape Town today. When families were kicked out of their homes and dumped on the Cape Flats, much of the family structure changed and families stopped caring for one another’s children.

“When I was growing up the whole road looked after you, but what are we doing as parents today? You see children doing the wrong things and you say, ‘that’s not my child’. But if you see the signs you must say something,” she said.

De Lille urged women to take charge in their communities.

“In the house the mother is the boss,” she said.

Parents needed to stop raising “brats”, especially boys who grew up disrespecting their elders and were recruited by gang members. De Lille agreed that there were not enough social workers available for trauma counselling and suggested that the Hanover Park Civic Hall be opened for women who needed someone to talk to.

She said the Women for Change programme, launched by the City of Cape Town in 2016 by the City’s Social Development and Early Childhood Development Directorate, was one of the vehicles women in Hanover Park could use to better their community.

Shameema Ganief has worked for Women for Change for the past three years and is one of the women in the community who speaks to gang leaders when a ceasefire needs to be negotiated, or when young boys have been recruited.

“We go to the gang leaders and try to prevent children from becoming gangsters, and we try to help when there are rival gangs who want to fight. We intervene there,” she said.

“We’re not scared of them. The gangs respect us,” said Ganief.

“As women, they won’t interfere with us and they meet our demands. We feel enough is enough. Too many of our children have been killed.”

De Lille urged Hanover Park ward councillor Antonio van der Rheede to ensure that the memorial service should not be a once-off Women’s Month event and called for regular meetings to be held with women affected by gang violence. DM