Langa women get a chance to speak out on ‘township manhood’ 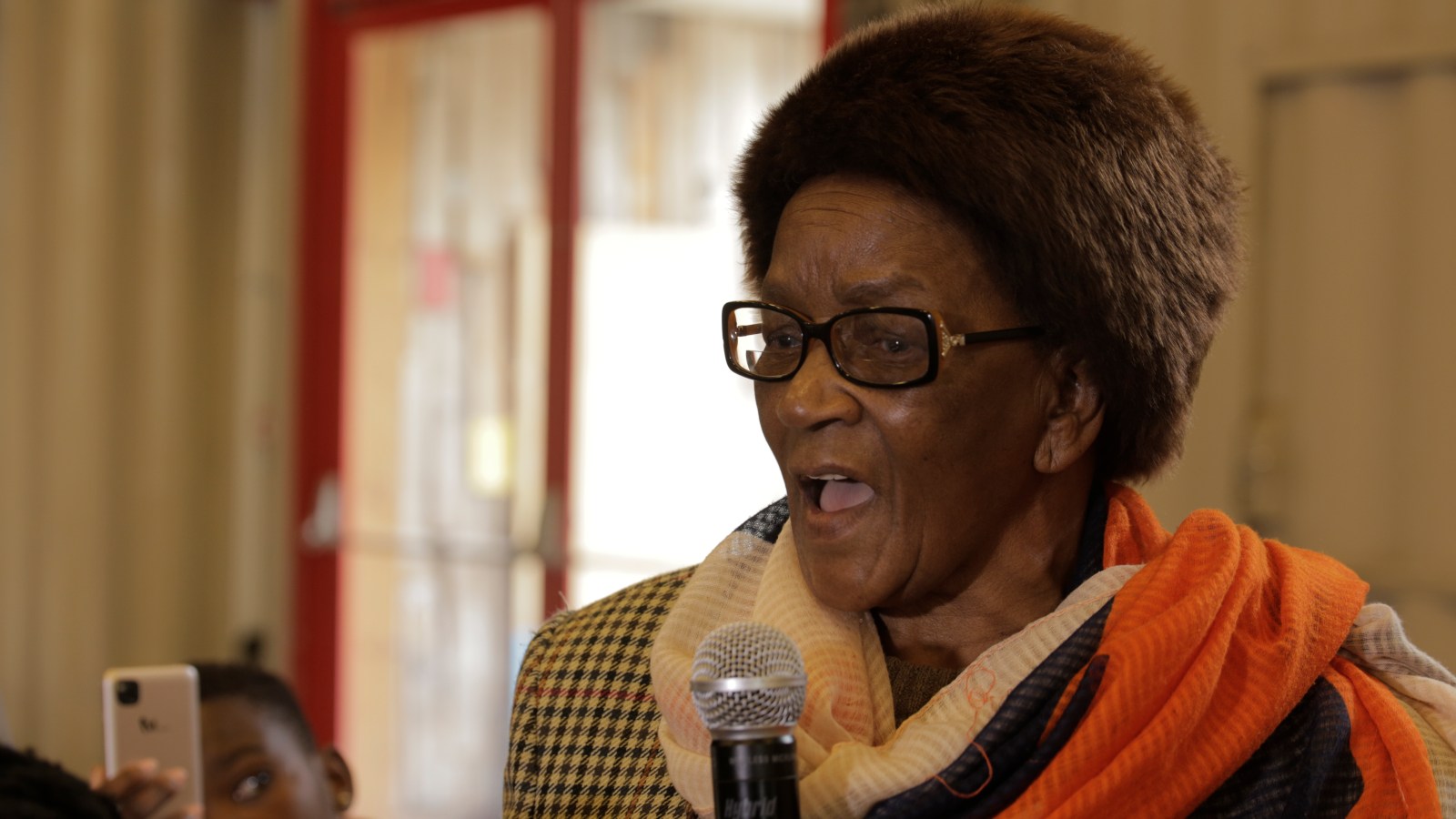 Mama Nozukile Mkunqwana is a Langa community member and elder who raised concerns on alcohol abuse in the community. Photo taken in Langa Cape Town by Hlumela Dyantyi.

In light of Women’s Month, a space was created for women and men from the Langa community to talk openly about township manhood in Cape Town last week. This is a rarity, as women in traditional African cultures are usually excluded from such conversations.

Anele Gqasani from the Langa Community Advice Services said that it was important that these conversations come to the Langa community as there is a gap between Langa and the academic spaces where these conversations often occur and where people present research and findings. Gqasani said that those who are affected the most by the subject of “township manhood” should be able to openly talk about their challenges in safe spaces, especially women who are often banned from entering sacred cultural spaces reserved for men, such as the kraal.

Chief Eric Ganata was a panellist at the discussion. Ganata is a Langa community member, he sits on the House of Traditional leaders and is part of the National Initiation Task Team — a group of regulators in the uLwaluko(Xhosa initiation) processes.

“Langa was the first community to have its own initiation site,” Chief Ganata said proudly. Ganata said that he prides himself in teaching respect and responsibility to young initiates, and ensuring that cultural processes are adhered to. Ganata said that Langa prides itself in the men who have left initiation schools and have gone on to be leaders in their community.

Ganata’s comment was met with disagreement from community members who said that even though young boys go to initiation schools to learn to become men of integrity, they often come back worse off.

Community members said that some of the initiation schools promoted a culture of drug and alcohol abuse, and that violence and killings were common at the sites and often happened over small conflicts that arise from young initiates trying to prove their masculinity.

Mkunqwana was concerned about the drinking that takes place at the initiation schools and at imigidi (celebrations of homecoming of the initiates).

“I’ve lived in Langa for a long time, there used to be all kinds of delivery trucks coming in, for food, for fruits and vegetables, everything, but now all I see in this community is the truck for alcohol.”

Mkunqwana was concerned that families are spending more money on alcohol than on food atimigidi. This puts strain on family members who have to pay for their sons’ initiation processes. She said that imigidi are becoming more about showing off rather than releasing respectable young men into the world.

She complained that the community was losing itself and its men through alcohol abuse. “I tried to question this and I was told to stay out of it because I am a woman and ndinxiba ibhatyi(I am a recognised church goer). They told me not to come and bringizinto zam zentsindiso(my born-again Christian values) because that takes away from the culture. Why do we have to buy ibhotile yooTata, ooMama, kuphinde kubekho neyamantombi!(Why should family members have to buy separate ceremonial bottles for mothers, fathers and even young girls in the community to drink during celebrations!)”

Community members agreed and shared sentiments with Mkunqwana, saying that young initiates mistreat their parents and disrespect teachers at school after the initiation process because they are taught to believe that they are superior because they are now men.

“There are young initiates in schools who refuse to do things their teachers are asking them to do, such as wiping the board or sweeping the class because they are men now, they won’t do such. They put pressure on their parents to buy them everything they want, they demand and demand, they feel entitled,” said a community member.

Thandi Gqiba, another community member, also said that men later on struggle to raise their own children and provide for their families because they expect respect which they have not necessarily earned.

“We are surrounded by what they call a man-child in our community. My mother was abused by my father for over 20 years. I look at my brother and I see how much of a man-child he is himself and I realise that it is because he was affected by that abuse. How should I expect his children to end up?”

Gqiba said that the #MenAreTrash debate would continue for years because as long as there were not men setting an example and calling out those who do wrong in the communities, men would continue to be violators.

Gqiba also said that there were boys as young as 10 or 12 years old who are a threat to community members, who walk around carrying pangas and robbing people in the corners of streets. “When we go to their mothers and ask them why do they not discipline their children they tell us they have also given up on them. Some mothers have even tried to get their children arrested because they are dangerous, but they can’t. Police will tell them they’re too young, what must we do do now?”

Gqiba added: “Kukho naba bana 16, uve umntu sisigebenga, kuthiwa, ukuba uye wakukhuphela imela ayibuyeli, ungofileyo wena.” (There are even some who are 16 years old, they are monsters in this community, you’ll hear people saying, if that one dares to take out his knife from his pocket, it won’t return to his pocket again. He will use it to kill you.”

Gqiba said that there are some scary young men in the community. Gqiba appreciated Chief Ganata’s presence at the discussion, because it gave community members a chance to question what initiatives the leaders in the community were taking, but she asked him to play a more active role in the grooming of men in the township.

An older man in the audience stood up and provoked a reaction after claiming that black men being abusive towards black women had come with democracy. Unisa student Zandile Kula, who was the only woman on the panel, responded by speaking about the gender hierarchy, saying that: “Abuse did not come with the coloniser, oomama bethu nani bathwala.” (Black men have been marrying young girls against their will for years.)

Kula said that black men need to stop re-affirming their manhood by being oppressive to black women. She said that black men constantly feel oppressed, isolated and powerless under the control of white elitist capitalists. They take out that frustration on women by being abusive, raping and killing them. Kula said:“Black men need to understand themselves, they need to see themselves outside of the white lens in order to do better and be better.” DM