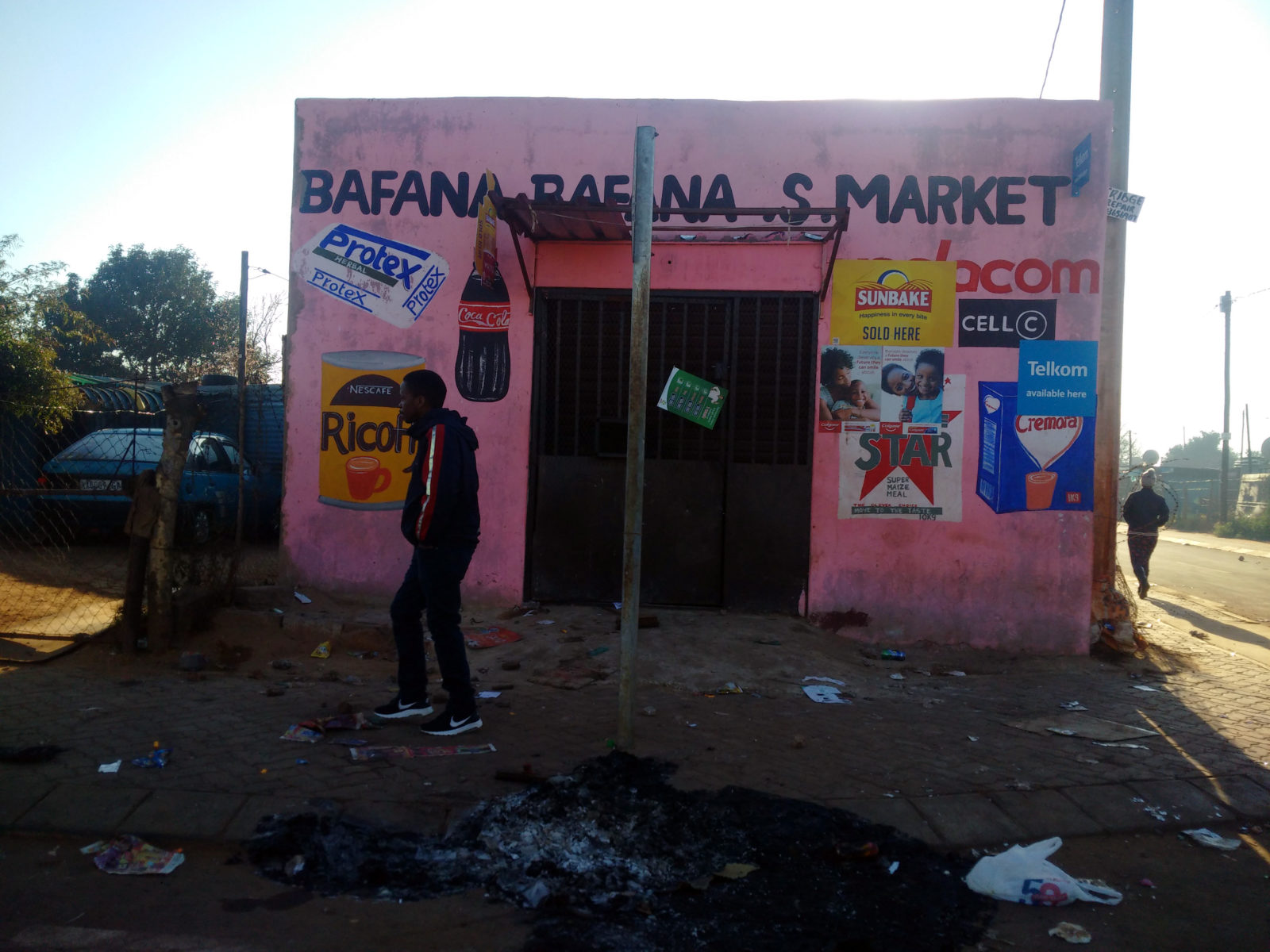 A disappointed community member returns home after discovering that his favourite shop has been looted in Protea South, Soweto. PHOTO: BHEKI SIMELANE

After a violent afternoon in Soweto which left three people dead and incalculable loss to foreign business owners after their shops were looted, Soweto residents have said that Wednesday’s action was about uplifting locally owned businesses.

After a trail of destruction and looting of foreign-owned shops on Wednesday, Soweto residents and local business people said they embarked on a drive to chase away foreign nationals because they were selling low quality and fake goods and also because local businesses were dying. They said people were tired of enriching foreign business owners and wanted instead to support local businesses because they sold quality goods.

Locally owned shops were not targeted during the violence and looting that broke out in White City, Soweto, leaving three people dead. Soweto residents told Daily Maverickthey wanted to prevent a takeover of their township by foreign business owners. They said it was time residents supported local businesses and got rid of foreign-owned ones.

“They said they don’t loot from us because we are black people. They want to push black businesses. They said it’s time they enrich their own people rather than supporting foreigners who sell expired food,” said Mudau.

Asked what the relationship between local and foreign businesses was like, Mudau said: “We don’t have one.”

She said since talk began that foreign business owners were no longer wanted, her business had drastically improved.

“Our businesses are picking up now. I can take care of my children.”

However, Mudau says the issue could have been handled better.

“I think the way people went about this was not right. But then again, the people were left to their own devices because the government refuses to listen,” Mudau said.

She said the solution lay in decisive intervention by the government.

A chief issue in Soweto is that the foreign shop owners are accused of manufacturing their own goods. Locals said this was unfair as they paid taxes while the foreign business owners didn’t pay taxes for counterfeit goods, which they sell at very low prices.

Locals also claimed that their shops were inspected about three times a year while there were no inspections for foreign-owned shops. They said foreign owners were not contributing anything to the growth of the country’s economy.

“I have a feeling this is not over,” said Mudau. “If they allow these people back, inspectors should be brought in and all township businesses should be regulated. Our government is too relaxed. These people must be forced to pay tax like us. They must be inspected just like us. It’s not fair”.

Many residents condemned the behaviour of young people in Soweto on Wednesday.

“This country is doomed. If kids behave the way they do and go on to steal the same food they say is expired, is strange,” said Mudau. “It just doesn’t make sense”.

There was a strong police presence in some areas, including White City, on Thursday. Some foreign nationals have sought refuge at the Moroka police station.

“We accepted these people, but they don’t employ local people. They take all the cash they make here back to their homes and contribute nothing to the country’s economy. They also take our women. I support the call to get them out of our township. Many of our women will give birth to Pakistani and Somali babies,” said Sipho Mathebula, 57, from Soweto.

When asked why he was not attacked as he is also a business owner, Soweto shop owner Eric Langa said:

“Because I’m neither Somali nor Pakistani.”

“I don’t sell expired food, besides, from what I know the community acted because they wanted to push local businesses. These people were attacked because they sell expired goods, that is why their prices are low. I’m happy communities are finally taking action on this matter. They use unfair business practices, like selling low-quality goods at very low prices.” Langa added: “It’s about uplifting black local businesses.”

“Where did they buy before these people came? Spaza shops are a South African thing and have long existed in South Africa’s townships,” Langa said.

Themba Shabalala, 38, said he was happy foreign business owners, especially the Pakistani and Somali nationals, had left. However, Shabalala said he was not happy with the manner this was carried out.

“They could have given them an ultimatum. Yesterday’s acts show that looting also dominated communities’ agenda. It means the plan was also to loot.”

Shabalala said both sides were wrong:

“The locals were wrong to loot. They should have given them a time frame. The foreign owners are wrong to come here and sell low-quality and fraudulent stuff. This is all the government’s fault.”

Police said 27 people had been arrested after Wednesday’s violence. They were expected to be charged with various crimes. The police also confirmed that three people had died in the White City violence. Their identities have not yet been released. DM