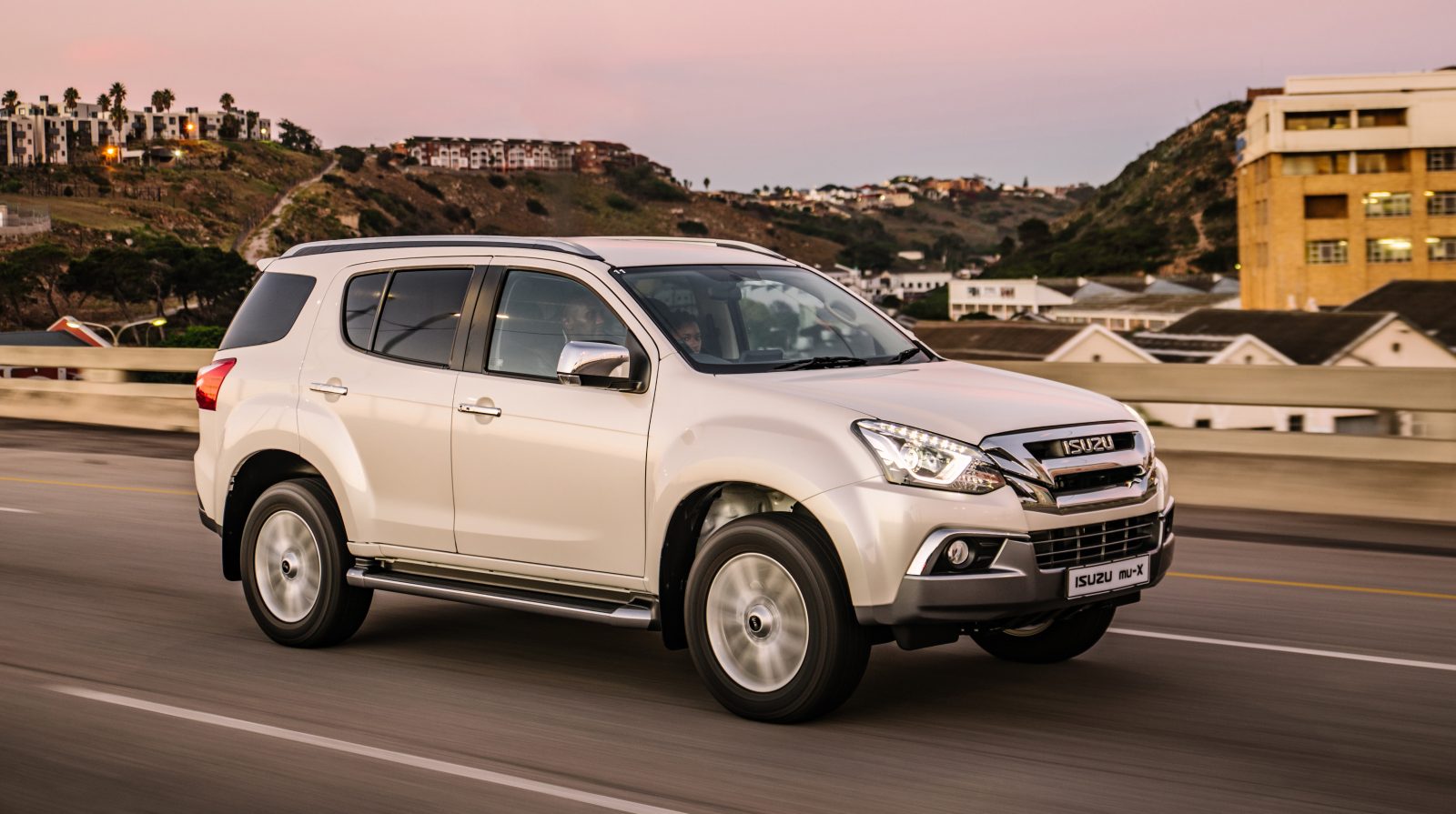 Isuzu’s KB bakkie range has a stalwart following, but the brand is hoping to extend its market reach with the mu-X, a bakkie-based SUV targeting the Ford Everest and Toyota Fortuner. Does it have what it takes to take on these big guns, though?

We all know that SUVs continue to gain popularity, both globally and on South African soil. However, many of those so-called SUVs are more urban crossovers than true go-anywhere machines, while placing the emphasis on style rather than all-terrain practicality. 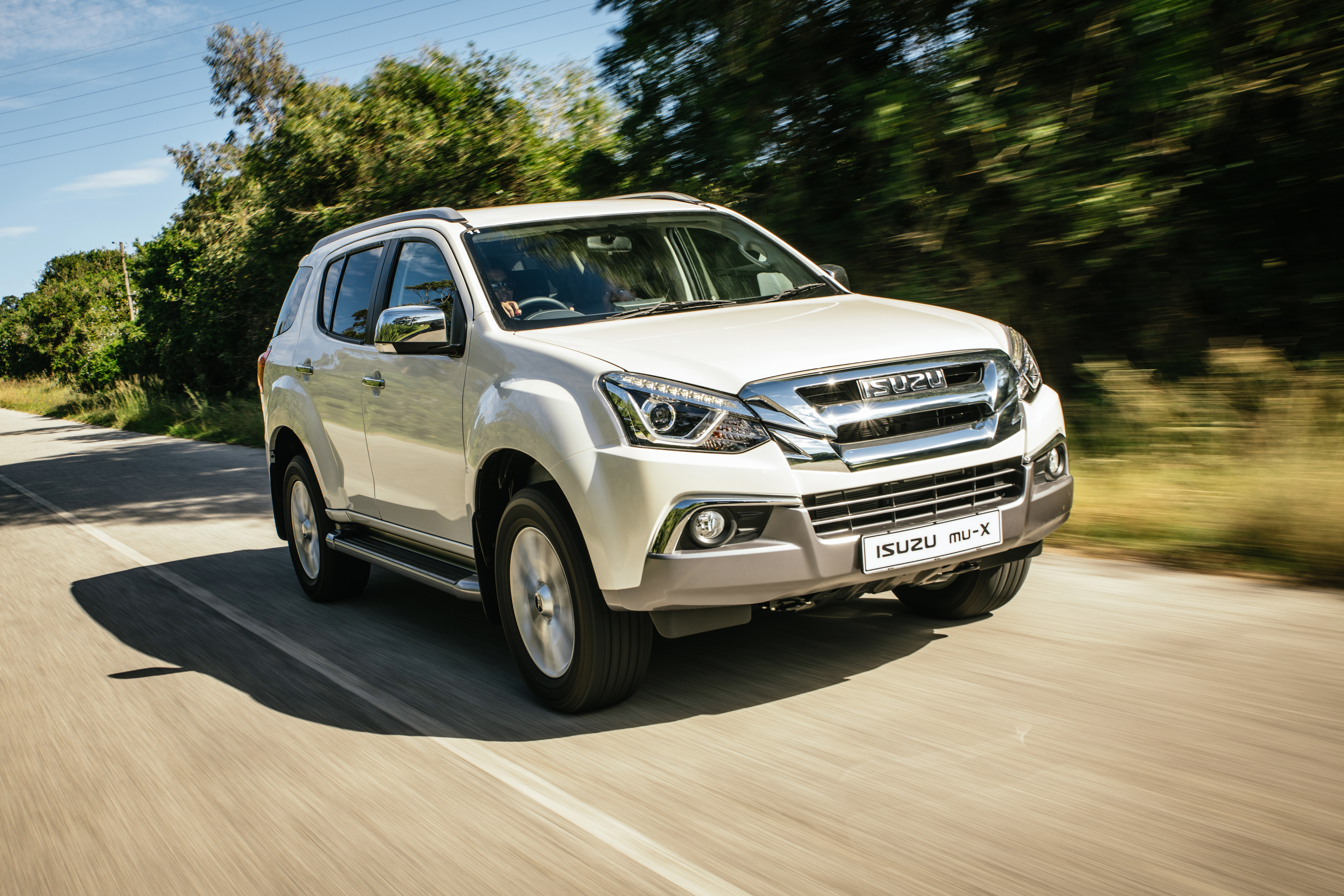 For buyers seeking a rugged and spacious SUV with off-road credentials, the pickings are slimmer than you’d expect, though – especially if a third seating row and a sub-R600k price tag are added to the wish list.

To its credit, Toyota was quick to recognise the potential for just such a vehicle, and its Hilux-based Fortuner remains the overwhelming market leader in a segment also contested by the Ford Everest, Mitsubishi’s Pajero Sport – and, until recently, the Chevrolet Trailblazer. 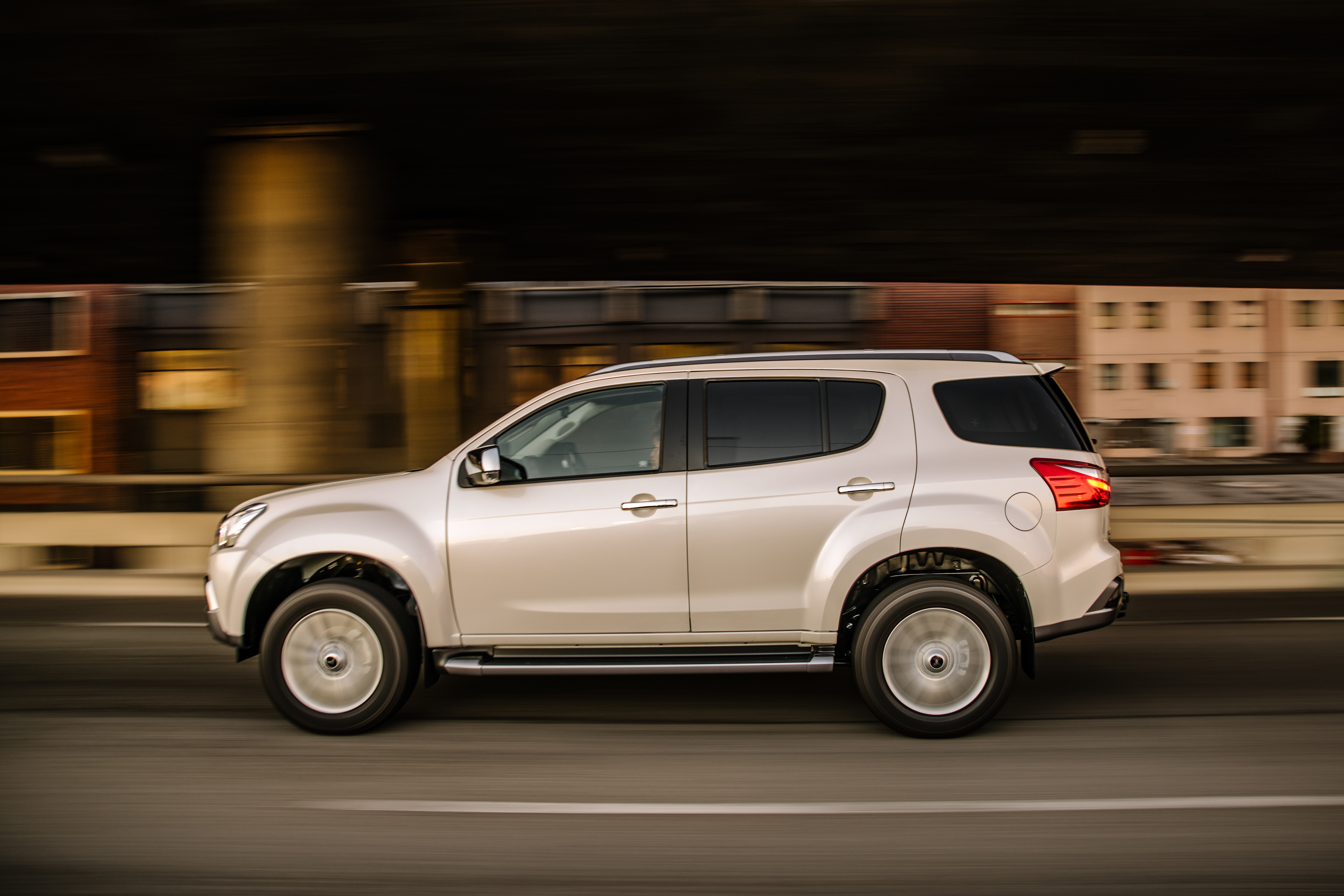 Together, this quartet regularly accomplished monthly sales of between 1,600 and 1,700 units. However, the Fortuner was by far the dominating contender, maintaining a share of more than a thousand sales.

When GM vacated the South African market at the end of 2017, it took the Chevrolet brand with it, which means the Trailblazer is no longer available. But Isuzu, which took over the GM production plant in PE and continues to build the KB bakkie range there, has filled that void more than ably with its own contender: the KB-based Isuzu mu-X.

Only launched a few months ago, the mu-X is already finding a steady stream of buyers, attracted by Isuzu’s well-earned reputation for building good, reliable bakkies, and perhaps by the appeal of a freshly launched contender.

Aesthetically, there are some similarities between the mu-X and the Trailblazer, particularly as far as the silhouette and the C-pillar treatment are concerned. Indeed, the two vehicles share the same basic platform. 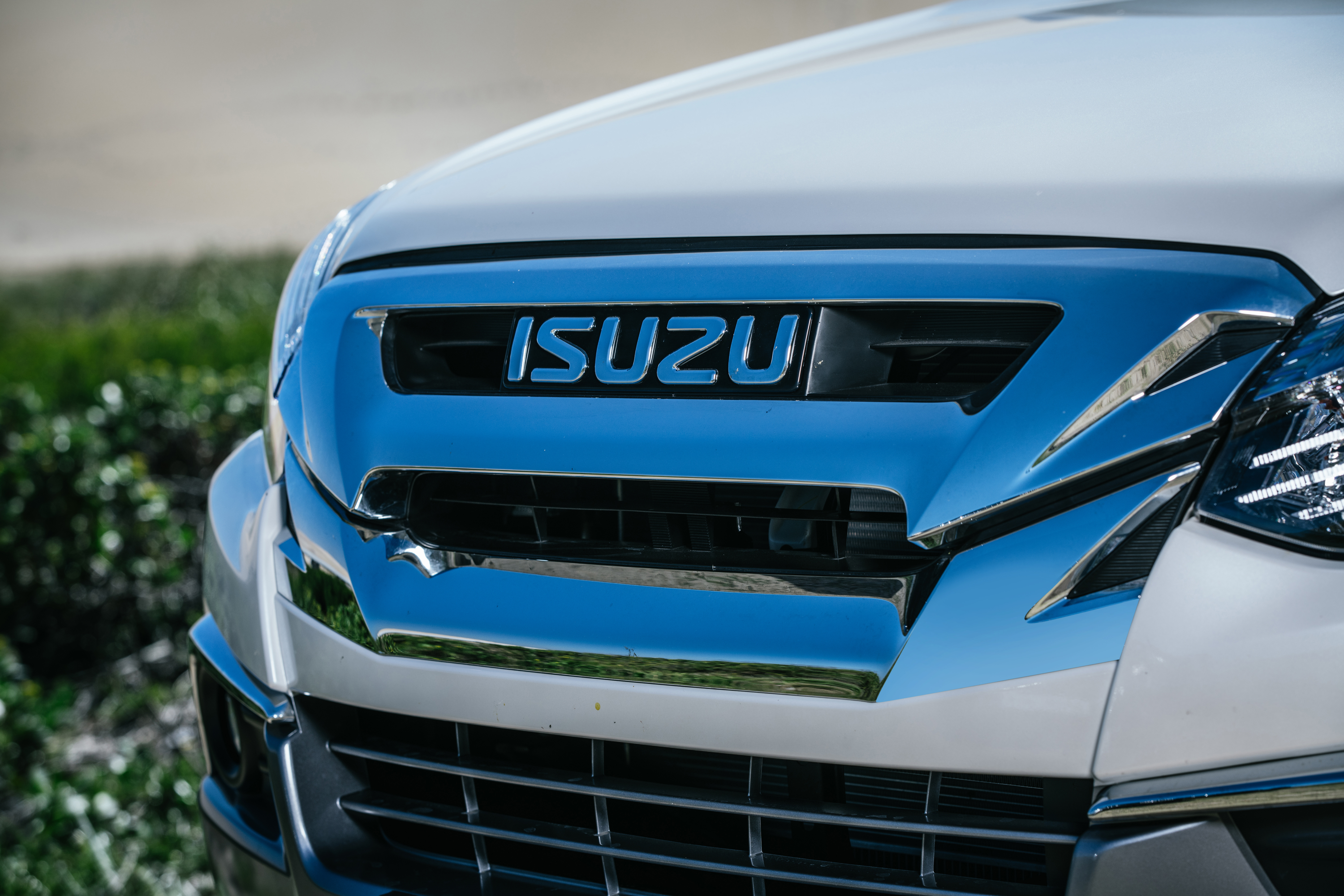 But the mu-X is emphatically an Isuzu product, with a drivetrain now based on the KB300 one-tonner, and a bespoke, specifically developed suspension.

In many ways, that’s a good thing: durability certainly won’t be in question here, and the Isuzu KB has always offered one of the bakkie world’s better rides. But for all its reliability, the drivetrain remains distinctly utilitarian. 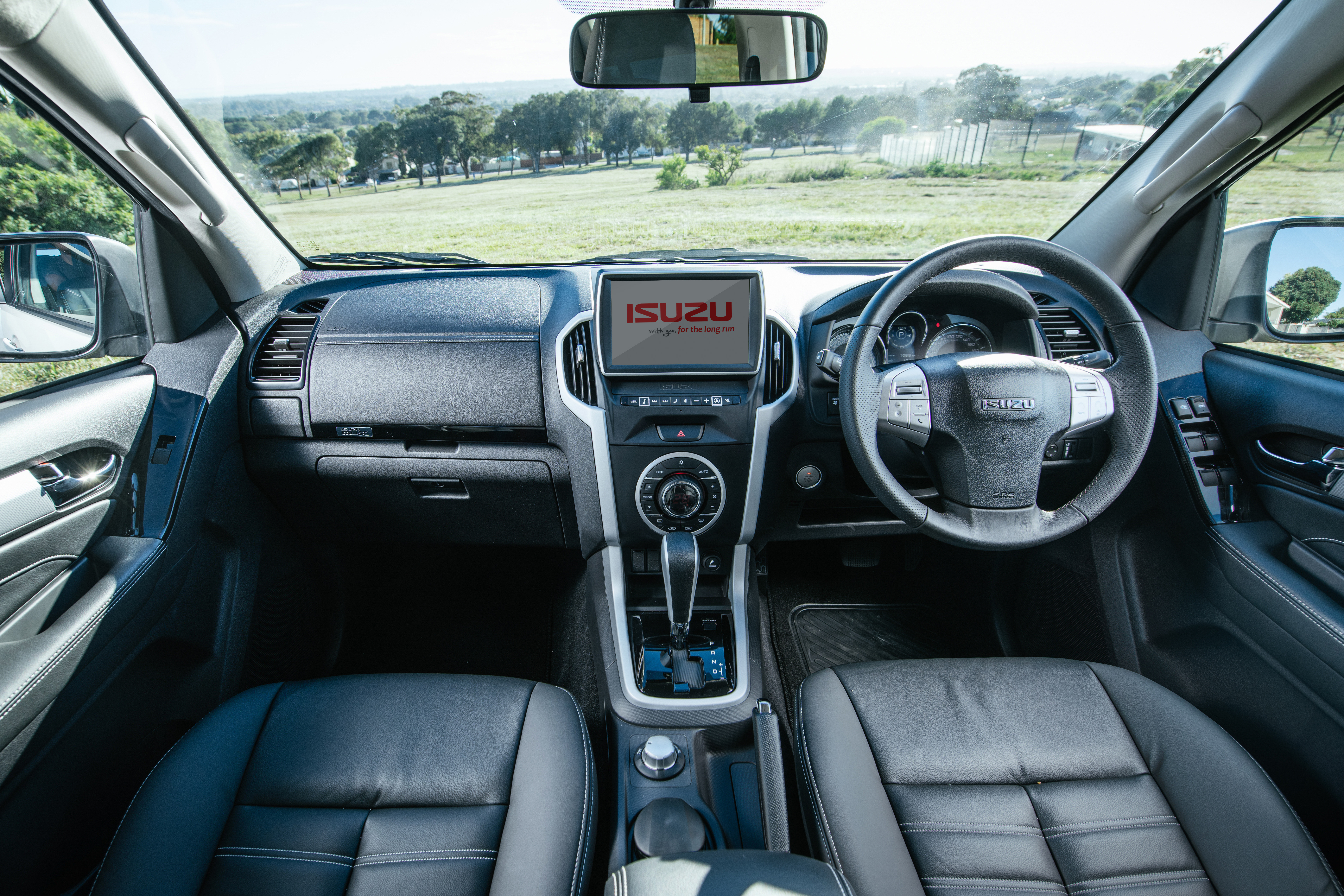 The mu-X is powered by the same 3.0-litre D-Teq turbodiesel engine as the flagship Isuzu KB300 models. It’s a big-bore four-cylinder mill, engineered for bulletproof reliability regardless of conditions.

At 130kW of maximum power and 380Nm of torque, the output is competitive, but throttle response is laid back by modern turbodiesel standards, accompanied by a sound best described as agricultural. 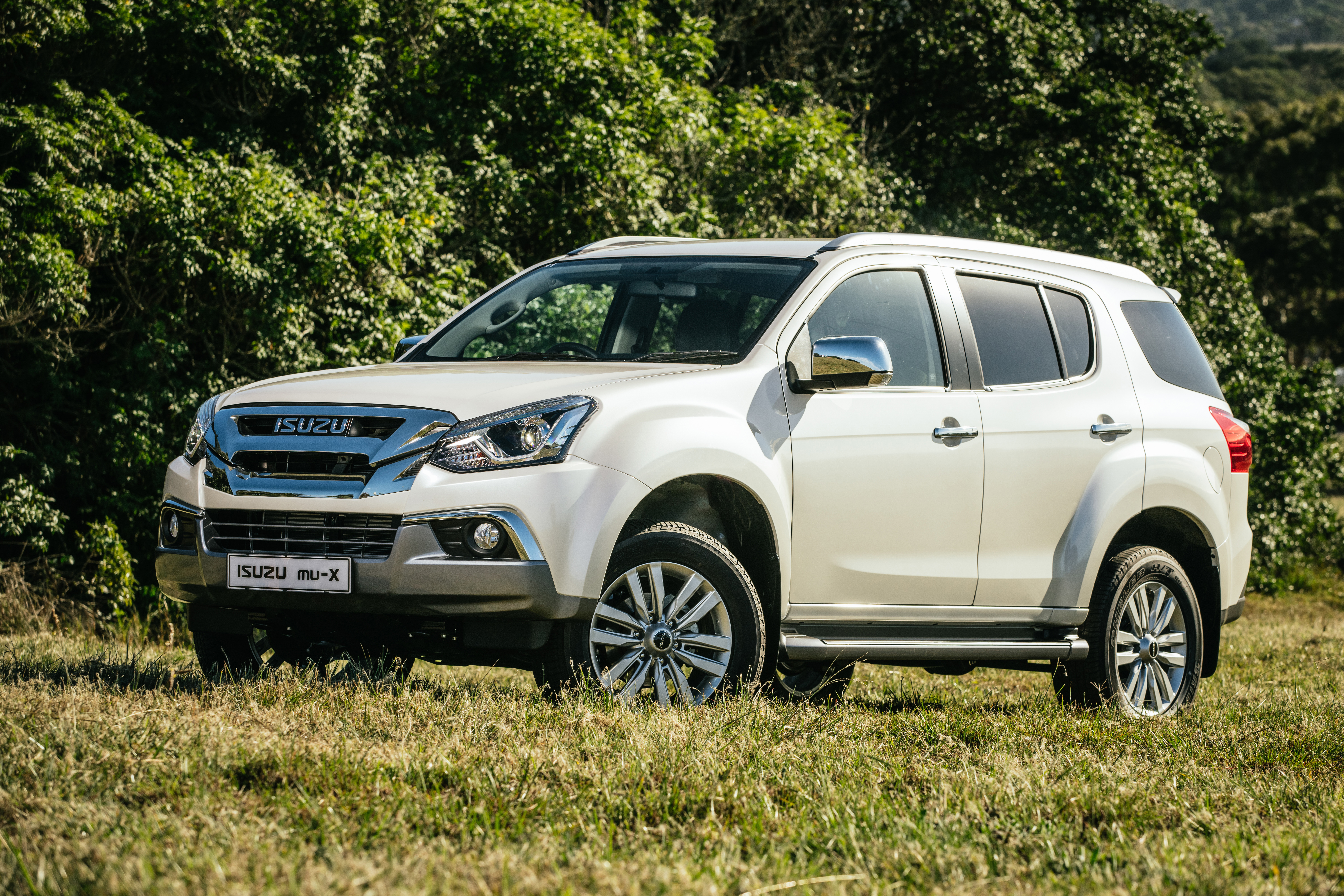 The only transmission choice is a six-speed auto, which suits the engine’s characteristics well. There is a manual override mode, which might be useful in off-road situations, but most of time, it’s best left to its own devices

As the mu-X tested here is the more affordable rear-wheel drive version, there is no all-wheel drive, which of course limits all-terrain capability. However, it does boast a substantial 230mm ground clearance, good wheel articulation and the kind of rugged construction that will still allow it to tackle fairly challenging terrain.

All the more reason then to lament the omission of a rear diff lock, which would give even this rear-wheel drive mu-X an even better shot at the kind of conditions lifestyle SUVs could only dream of. 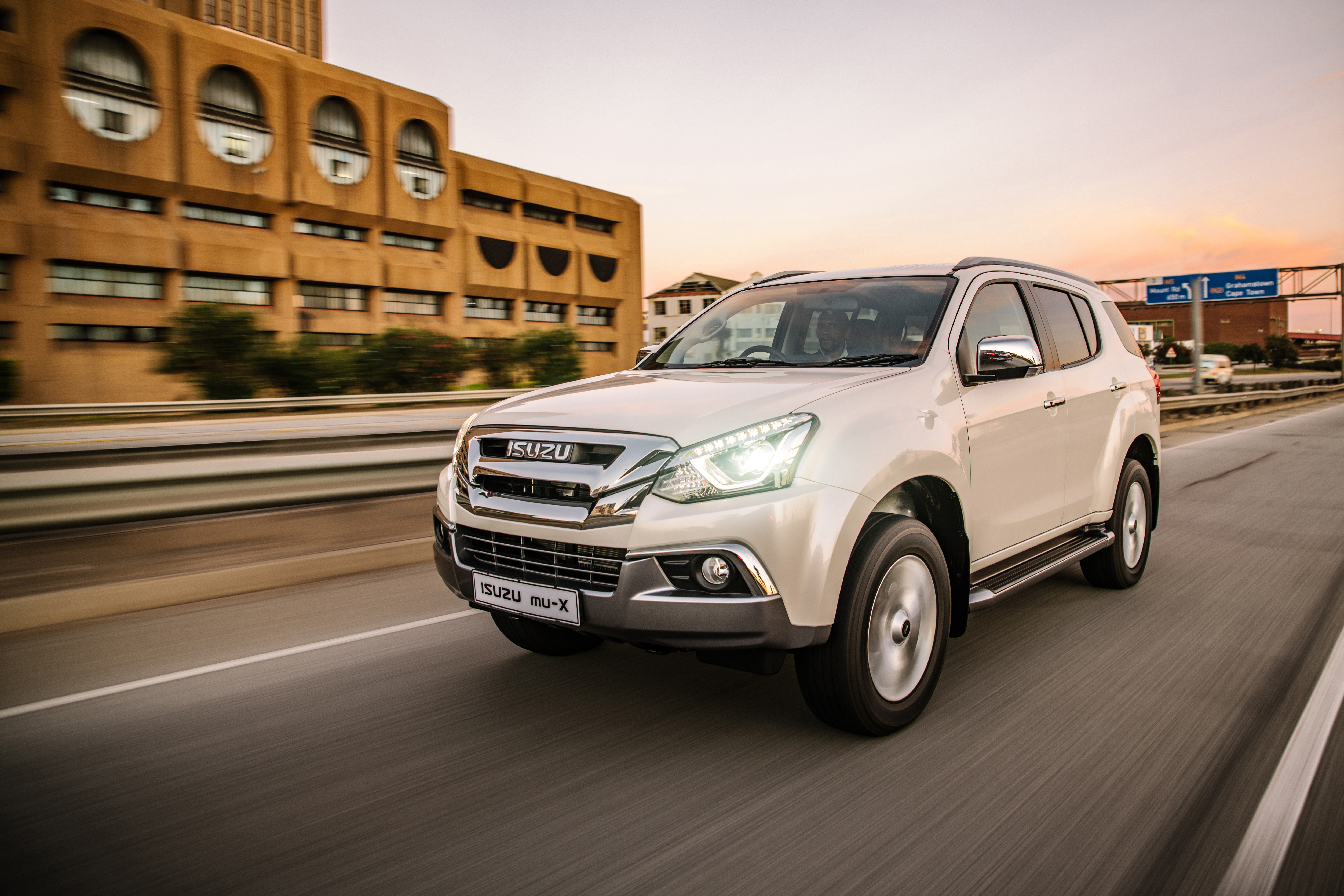 It’s worth remembering that many would-be mu-X buyers will have no real gung-ho off-road intentions, but will be looking for a robust all-round family vehicle with decent long-distance and towing capabilities, while not being intimidated by compromised road surfaces.

Besides, opting for the 4×4 model adds R61,100 to the asking price, together with the additional mechanical complexity of the four-wheel drive system, and a thirstier appetite for diesel.

The cabin is well kitted out, but the three seating rows are likely to be of greater interest to aspiring mu-X owners. The second row is split 60:40, while the third row folds away into the cargo bay floor when not in use – a big advantage over the Toyota Fortuner’s awkward rearmost seats, which flip up and to the sides of the cargo bay.

With all seats in place, the mu-X will seat seven – but that rearmost bench isn’t exactly full-sized, meaning adults won’t find them comfortable for longer journeys. In fact, they’re best occupied by children, who’ll also find it easier to get in and out. 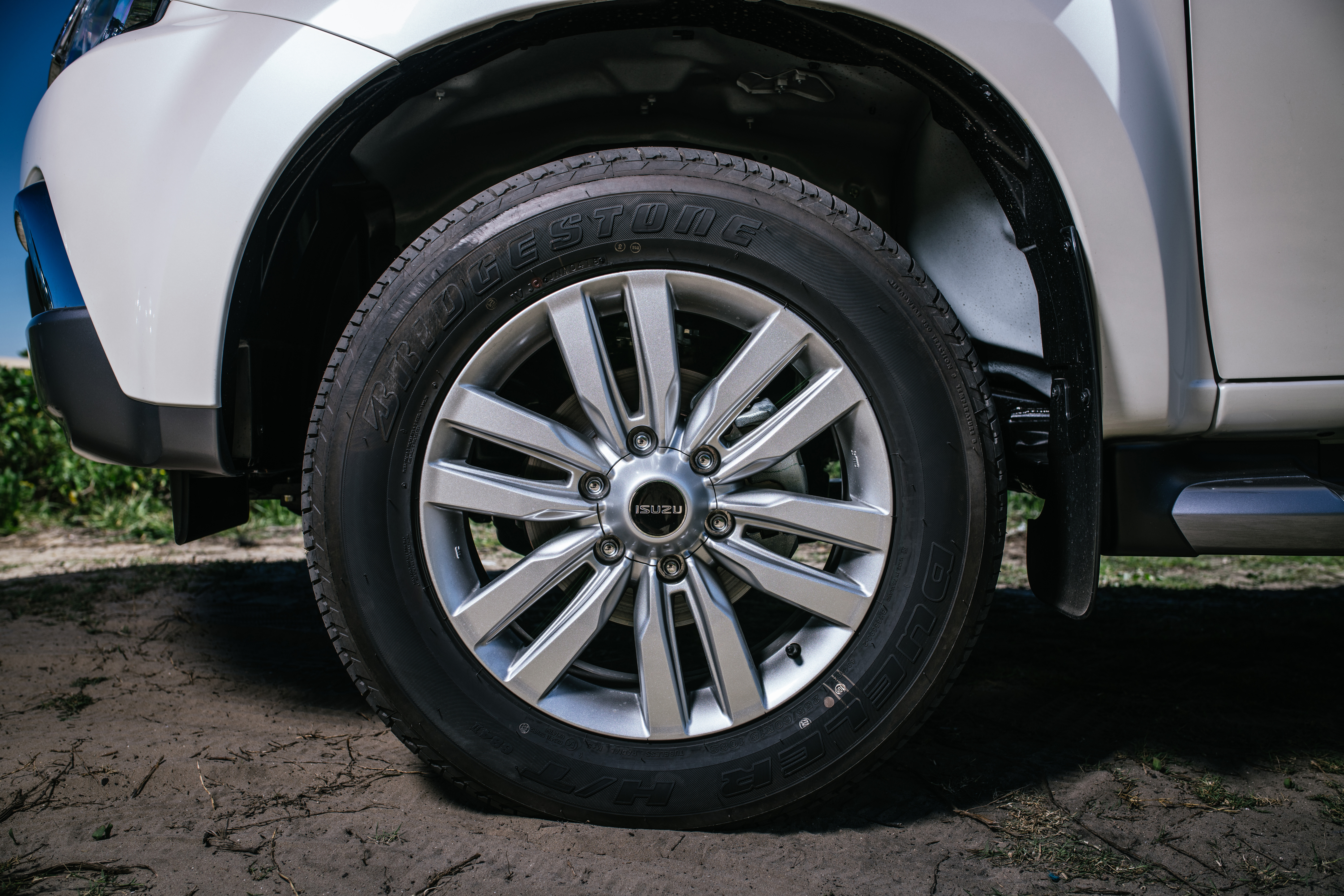 Remember too that using the third seating row robs the Isuzu of almost all its cargo space, making the use of a trailer or rooftop luggage box for luggage a must on holiday trips.

With the last row stowed, luggage capacity is an impressive 878 litres, and if you fold the middle seating row flat, you can throw the proverbial kitchen sink into the 1,830 litres on offer.

The leather-trimmed interior finds a good balance between smart and functional. It’s not fancy, but it’s comfortable and well executed, and the list of standard features is extensive.

The most important of those include remote central locking, electric front seats, electric windows, climate control air-con, cruise control and a 6.5-inch touchscreen-based infotainment system with Bluetooth hands-free and audio, satnav and a rear-view parking camera. You can opt for a larger, and nicer, 9-inch screen, but that adds R14k to the bill.

The mu-X is not for boy racers. That 3.0-litre turbodiesel engine doesn’t enjoy being revved hard, and it gets off the mark with deliberation rather than enthusiasm.

But once on the move, progress is effortless and relaxed, and it shines on the open road, where it enjoys stretching its legs.

The gearbox ratios do a good job of harnessing the turbodiesel’s inherent tractability, ensuring that the mu-X shrugs off loads and easily maintains legal cruising speeds, almost regardless of terrain. 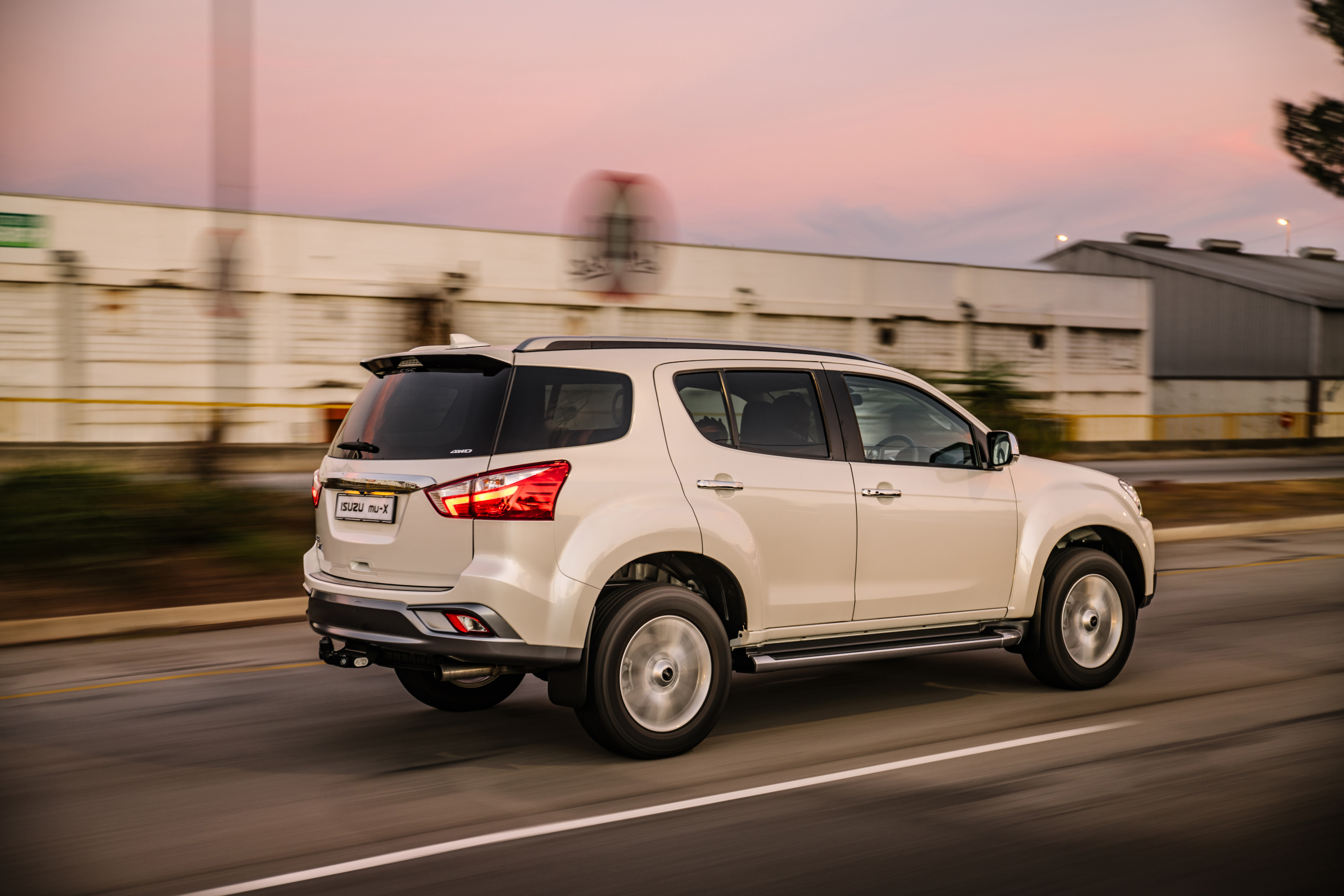 That midrange grunt should also make for excellent towing capabilities, which will please caravan and boating enthusiasts.

Ride comfort is good on both tar and dirt, and the coil-sprung suspension does a good job of soaking up the rougher stuff, without compromising handling. The power steering isn’t the most precise, but doesn’t get in the way of manoeuvrability and tracks a steady course in straightline terms.

Noise levels are about what you expect of a bakkie-based SUV with all-terrain tyres: road and wind noise are within acceptable limits at highway speeds, but become increasingly intrusive when pressing on.

After dark, drivers will appreciate the bi-LED headlights, which provide excellent illumination – an aspect often underestimated by vehicle owners. There really is no reason for auto makers to persist with inferior halogen headlights.

Head for the hills, and the rear-wheel drive mu-X is likely to surprise with its all-terrain capabilities. The combination of good ground clearance, the turbodiesel’s torque, a rugged suspension and useful approach and departure angles allows less forgiving conditions to be tackled with confidence.

With only rear-wheel drive and traction control, there are limits to what the Isuzu is capable of, but as mentioned, those likely to regularly encounter more extreme conditions can always opt for the 4×4 model. 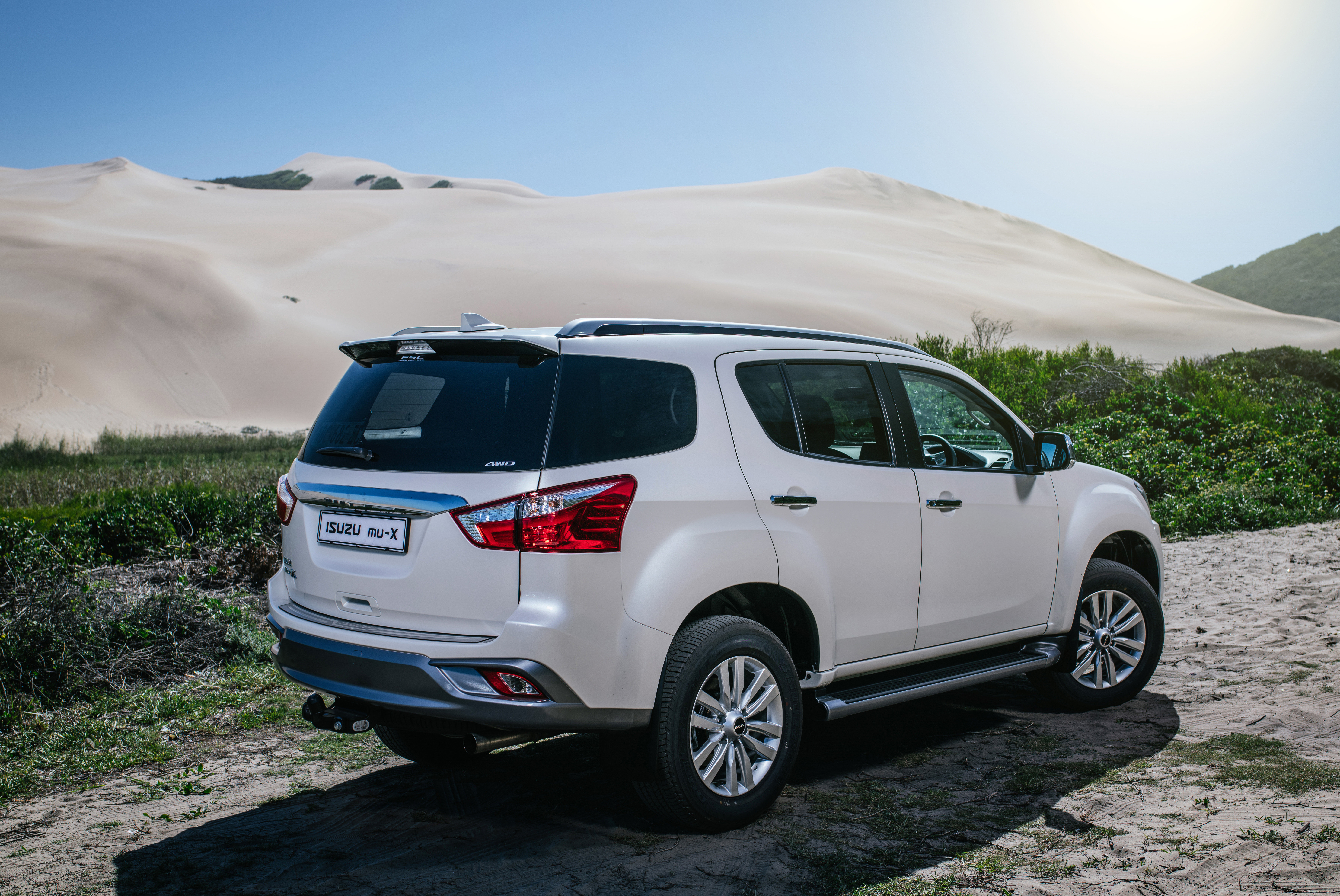 It’s unlikely that the Isuzu mu-X will make a significant dent in the market-leading Fortuner’s sales tally, while the Ford Everest is equally comfortably ensconced as the segment’s second best seller in volume terms. To be fair, both also offer a far more extensive line-up of models.

However, the Isuzu’s mix of keen styling, comprehensive equipment levels, seven-seater space and inherent ruggedness is likely to attract a ready and growing motoring audience.

Now, if they could just cure that engine’s tractor-like soundtrack … DM