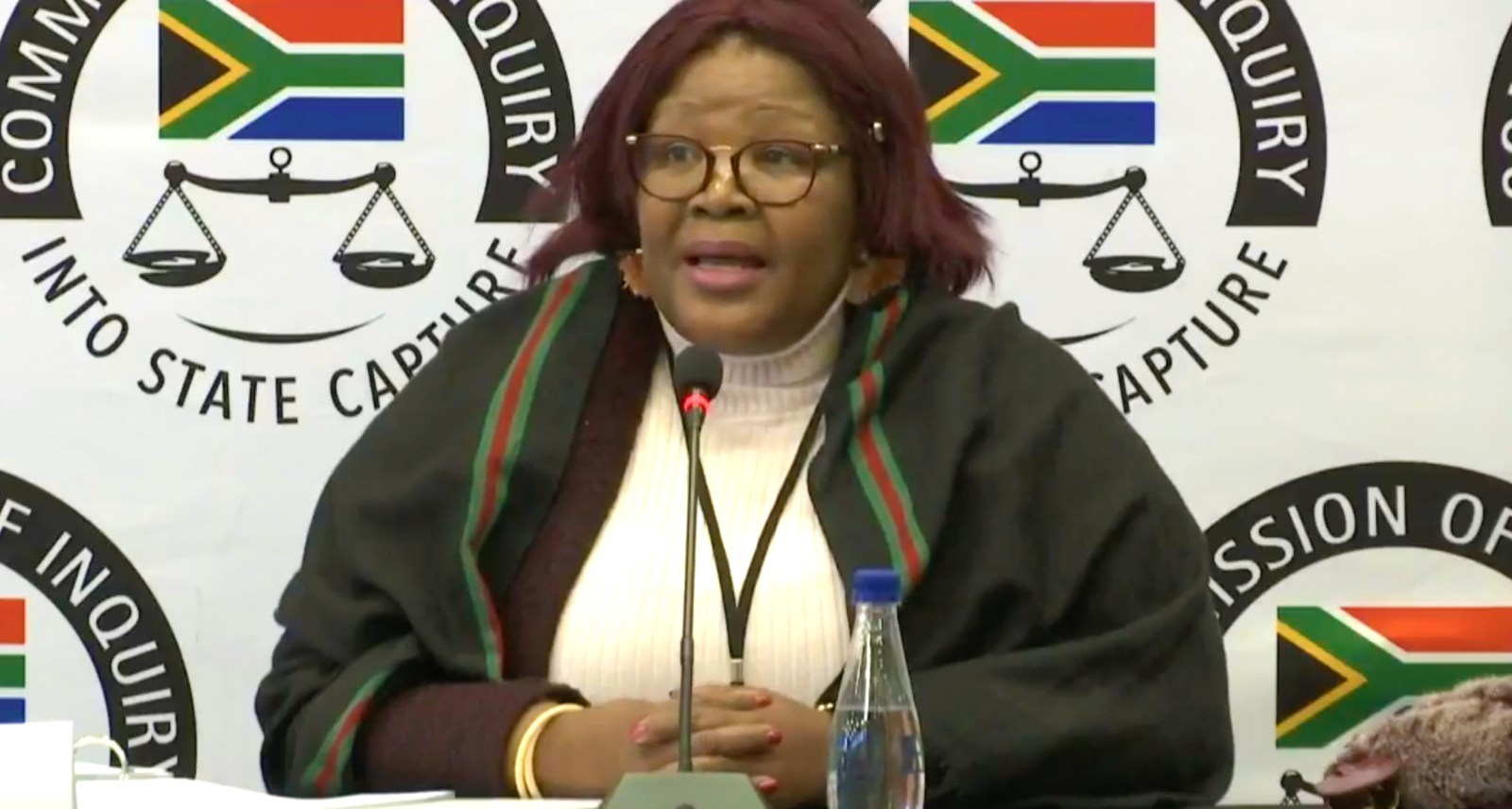 Former ANC MP Vytjie Mentor dropped several bombshells in her second day before the Zondo Commission, suggesting that Luthuli House was informed of former president Jacob Zama’s dangerous Gupta alliance as far back as 2010 – and that the Hawks had tried to sanitise her criminal complaint by insisting she strike out a controversial Zuma/Gupta paragraph.

A dramatic second day of testimony by former ANC MP, Vytjie Mentor, ended with a heart-rending plea for help following security-related incidents at the Johannesburg hotel she is staying in.

An emotional Vytjie Mentor broke down about worries for her safety following two strange incidents at the hotel where she is staying while in Johannesburg for the State Capture Inquiry.

On the eve of her first day’s testimony on Monday, two latches on the door of her room, the same one she has occupied each time since becoming a witness, were broken.

Then, on Tuesday morning as she briefly returned to her room to fetch her glasses, the hotel key card wouldn’t work and the door, quite unusually, was opening and closing without it.

Justice Raymond Zondo, chairman of the inquiry, immediately asked the commission team to examine Mentor’s concerns, and if necessary to arrange security for the former ANC MP.

He thanked Mentor for trusting the commission with this information and assured her that her safety was important and that, subject to what she may be comfortable with, staff would explore other measures to ensure her safety and, if necessary, also some form of protection.

Mentor’s public State Capture journey began after she made revelations on Facebook about a Gupta offer to make her the minister of public enterprises while on holiday in Thailand in March 2016.

And that, just as Gupta brother, Ajay, had allegedly told her at a meeting in 2010, former Public Enterprises minister Barbara Hogan was indeed sacked two months later, although Mentor didn’t get the job, having shown herself to be a little agitated and inflexible to the Gupta demands.

In May 2016 she provided police with a detailed statement of allegations about Zuma, his son Duduzane, the Guptas and some members of Cabinet.

While her initial testimony at the commission dealt largely with her encounters with the Gupta brothers and the former president in China and Saxonwold, Tuesday was marked by serious allegations that she had immediately alerted senior ANC officials as well as fellow MPs who had served with her on the Joint Standing Committee on Intelligence in Parliament.

Mentor had earlier testified how, upon travelling to Johannesburg for a meeting with Zuma, she was instead taken to their Sahara office and later to their Saxonwold home where the job offer was made.

On Tuesday she said that she had had a meeting with former ANC Secretary-General Gwede Mantashe and Jessie Duarte to inform them of the September 2010 meeting with the Guptas. Mantashe, she said, had left the meeting early while Duarte, whom she claimed had appeared less interested, allegedly said her concerns were “noted”.

Mentor says that she had also informally told fellow MPs who served with her on the Joint Standing Committee on Intelligence at Parliament around that time.

This was after she realised that Ajay Gupta had allegedly had knowledge about an unspecified “Top Secret” Denel project when she met him a few weeks earlier.

She told the commission that once one of the opposition MPs raised the incident at the start of the committee meeting, the then chairman, former State Security Minister Siyabonga Cwele, had committed to taking it up with “Luthuli House”.

She was not aware of anything ever coming of this, but this, along with her claim to have briefed Duarte and in some part Mantashe, sends a clear signal that senior ANC members were aware of Zuma’s problematic Gupta alliance as far back as 2010.

Mentor says her briefing to the ANC bigwigs as well as her informal mention of the issues to MPs were done before Zuma’s October 2010 Cabinet reshuffle.

Zuma’s office had responded publicly to her Gupta Facebook claims by simply saying the president had “no recollection” of Mentor.

Well, she told the commission that she had been an ANC MP since 2002 and had served in various capacities, including as national chairperson of the ANC caucus in Parliament over a four-year period.

During caucus meetings, Zuma would often be seated next to her. Asked by Justice Zondo how often Zuma attended those caucus meetings or if she had an estimate of the number of times she would have been in meetings with Zuma, Mentor confirmed that it would be in excess of 20 times over the four years.

She said attendance registers signed by ANC members for those meetings may be available to the commission.

Earlier in the day, the commission was alerted to applications by several implicated parties who intend bringing applications to either cross-examine Mentor or former deputy finance minister, Mcebisi Jonas. Among them was Advocate Alois Mtolo from the Hawks.

Mentor named him in connection with an attempt to strip her May 2016 statement to police of a key reference to Zuma, his son and the Guptas.

Two Western Cape policemen, one of them a detective, another from the office of Major General Jeremy Veary, had taken down a lengthy statement from her over “breakfast, lunch and supper”.

She was assured that this hand-written statement, part of a wide-ranging criminal complaint, was in safe hands.

But instead, when she complained about the lack of progress, and demanded her statement back, she was referred to an unnamed senior female Western Cape police officer who told her that the file had been “airlifted” to Pretoria.

She told the commission that Veary had told her that he had been ordered to hand her statement to the head of detectives in the Western Cape.

“At some point a certain Advocate Mtolo came to my home, saying he had been sent by the Hawks to meet me.”

Advocate Mtolo, Mentor says, had told her that he was an advocate from the Hawks.

“He promised to bring my statement… but what he brought was seemingly a typed version, a corrupted version,” she said.

When she told him the typed up version had errors and was not a complete reflection of her initial statement which had taken an entire day to draw up, Mtolo allegedly told her that her complaint included Zuma and that “had tied their hands”.

While promising to return her original statement once he was back from leave, Mtolo never did. In fact, Mentor says that she only received a copy of this document via the State Commission on Monday night.

“He insisted that the case was not going to go anywhere if I didn’t remove President Zuma from it.”

Mentor says she then agreed, in order for the case to get attention, to allow him to strike out a paragraph that read: “I am of the conclusion that the Gupta family, the son of the president and some ministers whom I have named as well as the president to a certain extent all have a corrupt relationship that gives unfair advantage to the Gupta family and their associates at the expense of the State, using state resources and agencies all the way for their own benefit.”

Mentor’s testimony resumes on Wednesday morning and is scheduled to be followed by that of another whistle-blower, former government communications head, Themba Maseko. DM