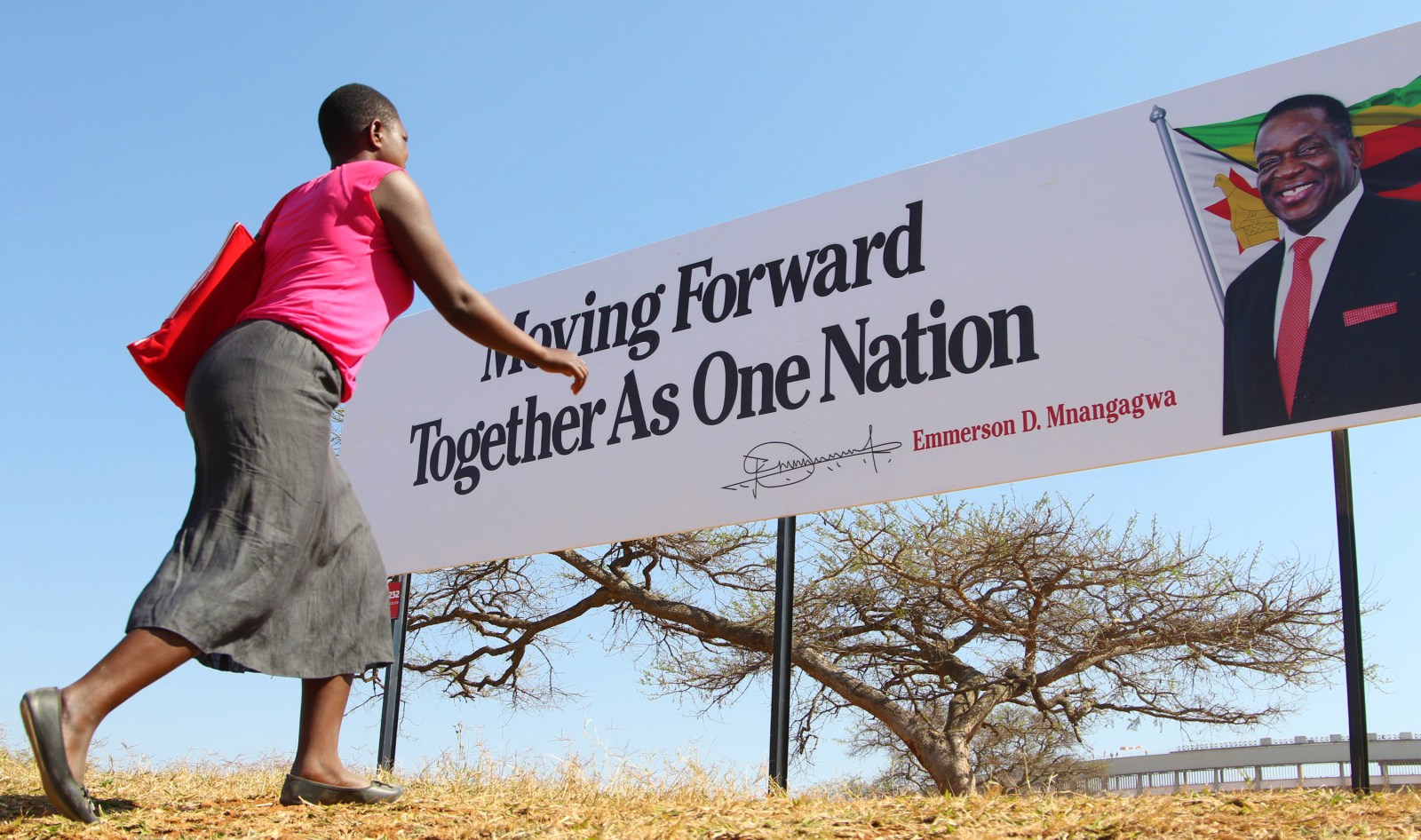 A woman walks by in front of a billboard showing Zimbabwean President-elect Emmerson Mnangagwa outside the National Sports Stadium in Harare, Zimbabwe, 26 August 2018 where Mnangagwa has been sworn in as the second executive President of Zimbabwe the same day. EPA-EFE/AARON UFUMELI

With all the legal options within Zimbabwe exhausted, the country’s opposition is fighting and is now looking at a coalition while the MDC Alliance would appeal to the African Commission for Human and People’s Rights for help with the “stolen votes”.

As far as MDC Alliance leader Nelson Chamisa is concerned, Emmerson Mnangagwa’s presidential inauguration might as well not have happened. Chamisa – “president” to his supporters – said the inauguration was “false”, because the election had been cooked. Even though his legal team failed to convince the court, the Zimbabwe Electoral Commission had admitted to some errors, but to date hasn’t announced any result other than the 50.8% win by Mngnagwa.

Chamisa in any case had a very long to-do list to tend to on Sunday, rather than sit through a ceremony for the better part of the day in Harare’s National Sports Stadium watching parades and performances with presidents such as South Africa’s Cyril Ramaphosa and Rwanda’s Paul Kagame.

In his inauguration speech, which should have happened two weeks ago were it not for a last-minute elections dispute by the MDC Alliance, Mnangagwa said:

“The Zimbabwe we want is a shared one and transcends political party lines. I pledge to act fairly and impartially, without fear or favour as a president of all Zimbabweans.”

If Chamisa was listening, he probably didn’t feel these words. The weekend for him consisted of trying to scrape together more than $3-million to pay for the MDC Alliance’s court challenge to the presidential election result. On Friday the judges ruled against the MDC Alliance’s application and ordered them to pay all the bills.

The $3-million figure came from Zanu-PF Secretary for Legal Affairs Paul Mangwana, who told Sunday Mail that this was the cost for the respondents’ lawyers alone.

MDC Alliance counsel Tembeka Ngcukaitobi, Dali Mpofu, SC, and Jeremy Gauntlett, SC indicated to Sunday Times that they did the case pro bono and even paid their flight tickets out of their pockets. They couldn’t be seen to be officially charging fees anyway because the Zimbabwean minister of justice, Ziyambi Ziyambi, did not grant them a licence to work in the country.

Ngcukaitobi said they have written to South African justice minister Michael Masutha to take the matter up with Ziyambi.

Chamisa’s legal avenues in Zimbabwe are now exhausted, because an appeal was not allowed, but Ngcukaitobi has confirmed that the team was preparing to take the case to the African Commission on Human and People’s Rights.

“We will be filing the petition with the commission this week,” he said.

It’s not clear whether there is a precedent for the case, but he said “the jurisdiction of the commission appears wide enough to encapsulate claims about denial of the right to a free and fair election, at least as part of the right to self-determination”.

Chamisa at a press conference on Saturday said the MDC Alliance would approach the commission with a petition based “on the flagrant and multiple violations of the universal human rights of the voters and people of Zimbabwe by the current Zimbabwean regime and the Constitutional Court”. This included the “right to free and fair elections; the right to a fair hearing before an impartial court; the right to legal representation by counsel of choice; the right against undue political interference; and the right to be governed by a legitimate government.”

The team might find themselves turned away by the commission at the outset, seeing that domestic legal remedies were available to them and that the process had been followed – and that Mnangagwa’s inauguration had even been postponed to allow it to unfold.

But even if the commission hears the case, it’s likely to be little more than just another stab at political theatre, and the commission can at best offer recommendations.

“The commission’s processes are slow, and Zimbabwe has ignored almost all the recommendations of the commission.”

Zimbabwe has ratified the African Charter on Human and People’s Rights and had an obligation to listen to the commission.

“The commission has to decide first whether the case is admissible before it. They will write to Zimbabwe for a response. In most instances they don’t respond,” she said.

“The commission cannot even refer the case to the African Court because Zimbabwe has not ratified the court protocol.”

Piers Pigou from the International Crisis Group said going to the African Commission for Human and People’s Rights would nevertheless give the opposition a chance to “profile and promote why ED’s legitimacy is suspect”.

He said legitimacy was important for Mnangagwa, also in the eyes of the international community, to help him achieve his goals of opening Zimbabwe for business.

The killing of at least six protesters by soldiers two days after the election did a lot of damage to his government’s standing.

“This is compounded by the continued fiscal crisis, digging (the country) deeper into domestic debt, and the issuing of TBs (Treasury Bills/Bonds) and printing of bond notes.”

He said he did not think the situation in Zimbabwe as it is would attract the right investors that would help resolve the fundamental structural challenges in the economy.

He said there was little transparency in some of the current investments “and lot of thumb-sucking and speculative projections about the amounts coming in”.

Despite unconfirmed talk that Mnangagwa had reached out to the MDC Alliance behind the scenes, Pigou said he hadn’t seen any real commitment beyond PR on this in Mnangagwa’s recent speeches.

Outside the legal dramas and the threatened protest action, the opposition will on Wednesday meet to discuss “political solutions”, probably in the form of a coalition.

MDC leader and MDC Alliance spokesperson Welshman Ncube told Sunday Times that there would probably be discussions about reconfiguring the seven-party alliance into a single organisation. The MDC-T is the largest party in the alliance, followed by the MDC and Tendai Biti’s People’s Democratic Party. Transform Zimbabwe, Zanu Ndonga, the Multi-Racial Christian Democrats and Zimbabwe People First are also part of the alliance.

Ncube said he hoped that “one centre, and a clear leadership structure” would emerge in the next few months.

An opposition alliance was unlikely to make much difference in Zimbabwe’s parliament, as Zanu-PF has a two-thirds majority in the House of Assembly. There were, however, a significant number of instances in the election where opposition candidates ran against each other and shot the opposition in the foot.

Forging opposition unity might yet prove to be a bigger challenge than winning that court case against Zanu-PF. DM