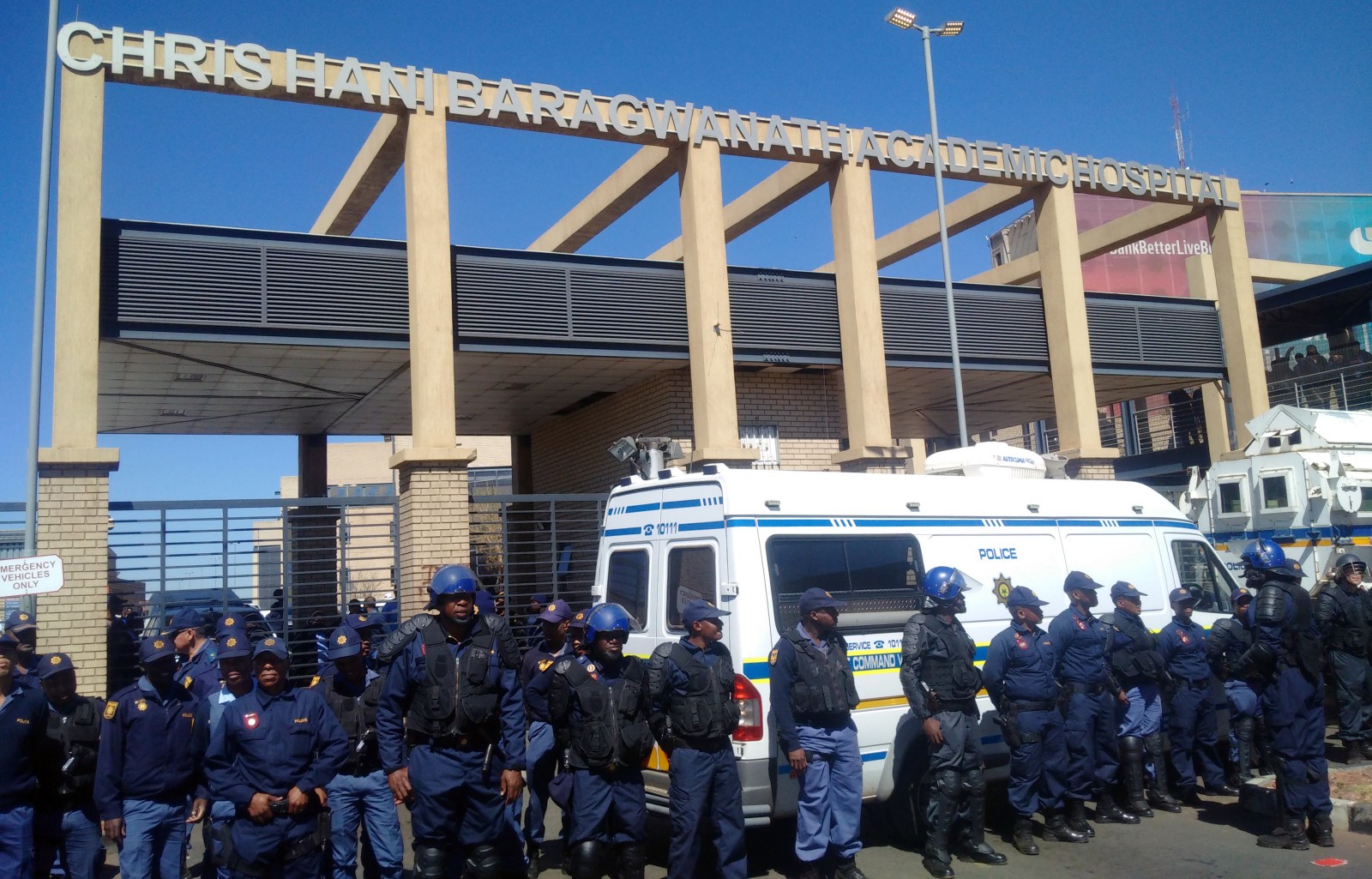 On Monday morning hundreds of health union affiliated workers marched on the Chris Hani Baragwanath Hospital demanding an end to corruption at the hospital and better working conditions. Pre-eminent among workers' demands was the immediate release of a report into corruption and the swift removal of the CEO.

Health unions demanded that the provincial department release a report into corruption at the hospital and also called for the removal of acting CEO Dr Sifiso Maseko. Unions accused the department of deliberately withholding the report claiming they wanted to doctor it to protect certain implicated individuals.

The corruption alleged involves claims of nepotism, and interference by the CEO in the hiring of staff. Unions said they first raised the issue of corruption at the hospital with the CEO himself who failed to act despite acknowledging that there was a need for an investigation.

Under the banner of organised labour, the unions then approached the department. The department said unions should give the CEO a chance to investigate the corruption complaints which they said they found disingenuous because the CEO was implicated.

Unions said in meetings with the HOD that they were assured that the department had launched its own investigation, but 27 days later workers were still waiting for the release of a report into the corruption claims.

“We thought we had reached a deadlock with this CEO, that is why we approached the department but they have withheld the report from workers,” organised labour Spokesperson Yandisa Zungula said.

Hundreds of armed South African Police members blocked the main gate to the hospital. Police Spokesperson Kay Makhubela confirmed to Daily Maverick that there were over 200 officers.

Meanwhile, inside the hospital services seemed to be affected as a number of patients either complained that the service was slow or were  turned away. Marcus Schoeman, 42, from Ennerdale was turned away and told to go and attend a local clinic. Both Schoeman’s feet are failing to function. He walks with the aid of crutches.

“I came here early this morning and was turned away, now I have to stay here and wait till 5pm for somebody to pick me up and by then my local clinic will be closed,” Schoeman said.

A young nursing sister, who asked not to be named, said services were interrupted because other workers wanted to evacuate staff from wards.

Zungula said the individuals implicated in the corruption at the hospital had already started intimidating workers. Unions accused the HOD and the department of stalling the release of the report and argued that this would have a negative effect in the provision of health services at the institution.

A NUPSAW Spokesperson said: “This is not a wage negotiation, the workers have spoken. They want the report now and they want the CEO to leave. The corruption can’t happen in Chris Hani’s name.”

Zungula added that certain officials were paid by aspirant job seekers to secure employment in the institution. He said those close to the CEO were benefiting from corruption at the hospital. He said important issues such as the shortage of staff, which affects communities, would never be addressed while corruption thrives at the institution.

Zungula said: “What we know is that officials are selling jobs. (There is) interference by the CEO in employment processes and tenders. You cannot turn a blind eye but the department is reluctant to get to the bottom of these issues.

SAPS Spokesperson Kay Makhubela confirmed to Daily Maverick that there were more than 200 South African Police Service members. He said they wanted to make sure that everything was in order and that services at the hospital were not affected.

“This hospital is for the people of Soweto, we must respect it. Let those who think they have power be removed,” said HOSPERSA’s Jeff Motladinyane.

Gauteng DENOSA chair Simphiwe Gada said their first call was to the human rights come because police officers manned the gates and prevented members of the public from entering the hospital premises.

HOD Professor Mkhululi Lukhele, who was also present, assured workers that the issues they complained about would be given attention.