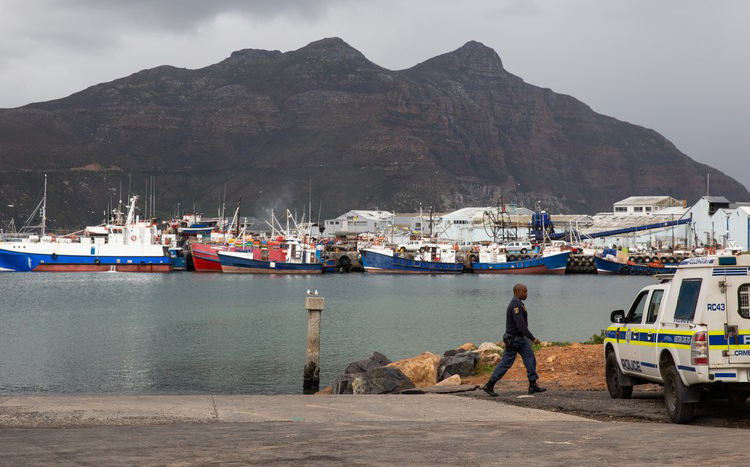 Two men who were with the Hout Bay fisherman who went missing in a recent anti-poaching operation say that he was deliberately killed by police. Photo: Ashraf Hendricks

Durick van Blerk has been missing since 11 August. By Kimon de Greef

Two men who were with the Hout Bay fisherman who went missing in a recent anti-poaching operation say that he was deliberately killed by police.

The fishers, who were released on bail after being charged for illegal possession of crayfish, told GroundUp in separate interviews that Durick van Blerk fell overboard after police fired at them in a pre-dawn chase on Saturday 11 August.

The police then shone a spotlight on the water, where Van Blerk was floating face-down in his gumboots and oilskin, and fired several more gunshots, according to the men.

“Out of respect for the ongoing IPID investigation into the Hout Bay incident we are not responding to any allegations,” Van Wyk said.

Van Blerk’s accomplices, who asked not to be named, told GroundUp that they had submitted affidavits to IPID matching their accounts reported here. IPID spokesman Moses Dlamini declined to confirm if the testimonies matched.

“He didn’t even shout for help.”

The fishers said that they were returning from illegally catching crayfish off Cape Point when they saw two boats without navigation lights below Chapman’s Peak. “I thought it was other poachers, preparing their bags before dropping them on shore, but when we passed them they started chasing us,” one of the men said.

Van Blerk was piloting the vessel and tried to flee, but the police boats, each equipped with twin 300 horsepower engines, were more powerful and quickly caught up, the fishers said. Then the police opened fire with what sounded like automatic weapons.

Photographs of Van Blerk’s boat taken afterwards at Table Bay police station show multiple bullet holes in the outboard motor and inflatable pontoons. According to John Stupart, director of the African Defence Review, the holes were probably caused by live rounds or rubberised high-velocity bullets “capable of wounding, even fatally” at distances of 40-metres or less.

With their engine shot out, the fishers began dumping their crayfish overboard, trying to get rid of the evidence. One of the men said he felt Van Blerk fall against his back and shrugged him off.

“He didn’t say anything. I was like, ‘No man, I’m dumping’, and when I turned around he was in the water.”

He said that when he looked back, Van Blerk was overboard. “I tried to grab him, but he didn’t even shout for help. I know he was shot.”

“(When) the ocean takes a dead person, he’s gonna lie like this,” he added, lifting his arms like a man on a cross.

The police drew up, jumped on to the boat and forced the two fishers to lie with their faces against the deck. “They hit me here, in my face,” the second man said. The first man said that he shouted, “Man overboard! Man overboard!”

When the police shone a spotlight on the water, both men said they saw Van Blerk with his arms spread out, rising and falling in the swell.

According to one of the fishers, a cop saw the body and shouted, “Jy, dit lyk daai ding gat versuip daar. (Hey, it looks like that thing is going to drown there.)”

He specified that the cop had used the word “thing”.

The men said they then heard the second police boat move away, followed by several gunshots. One man said he heard “six or seven”, the other “three to four.” The first man only mentioned the gunshots at the end of his interview, when GroundUp was reviewing the details of his account.

While the cops were busy with Van Blerk’s boat, another two poaching vessels drew into Hout Bay, returning from harvesting abalone at Robben Island. The men said that when they heard the engines, the second police boat gave chase.

The first man said, “They could have picked that guy (Van Blerk) up first.” The second man toldGroundUpthat he lifted his head from the deck and saw the cops pull Van Blerk’s body out the water.

Both men said that the second boat rode back towards them before pursuing the other poachers, and that one of the cops on board asked for keys to a 4×4 — either a Land Rover or a Land Cruiser — from officers on the first boat.

The fishers said that the second boat then roared off but abruptly turned around and headed out of the bay. “Now why they go (to) that boat, but then turn around?” asked one of the fishers. “They can moscatch that people also.”

He believed the reason was that Van Blerk’s body was on board, and “they knew – they got that body on the boat that people gonna see”.

Two abalone poachers who had been on board other vessels that night told GroundUp that police boats had raced towards them before veering off. There were no further arrests in Hout Bay until violent protestsbegan over Van Blerk’s disappearance, which many Hangberg residents blamed on the police.

Hundreds of people in Hangberg derive income from abalone and crayfish poaching, supporting hundreds of dependants. Few fishers have legal quotas sufficient to survive on, and protests regularly flare up over fishing disputes.

A search for Van Blerk began later that Saturday morning and extended for more than a week, involving the NSRI, a helicopter, police divers and members of the Hangberg community. At the time of writing his body still has not been recovered.

“They were searching in the wrong place,” one of Van Blerk accomplices told GroundUp. “I know exactly where his body was.”

The other man believes that the cops took Van Blerk’s body far out of the bay, ensuring that it wouldn’t be found.

Van Blerk was his nephew, he said, and they had often gone to sea together. Speaking about losing him, he began crying and said: “It broke me inside.”

“When we left the fishing ground we felt lucky, man. Laughing and what-what,” he said. “We go today, and tomorrow he’s gone.”

To clear his mind after being released on bail he had hiked into the mountains above Sandy Bay to chop firewood, but as soon as he returned to Hangberg he became angry and confused. “All the people are looking at you,” he said. “It’s like you did commit a murder.”

Van Blerk’s body was still in the water but would eventually wash up, he believed. And then there would be no denying what had happened. DM

Primary image caption: Two men who were with the Hout Bay fisherman who went missing in a recent anti-poaching operation say that he was killed by police. Photo: Ashraf Hendricks