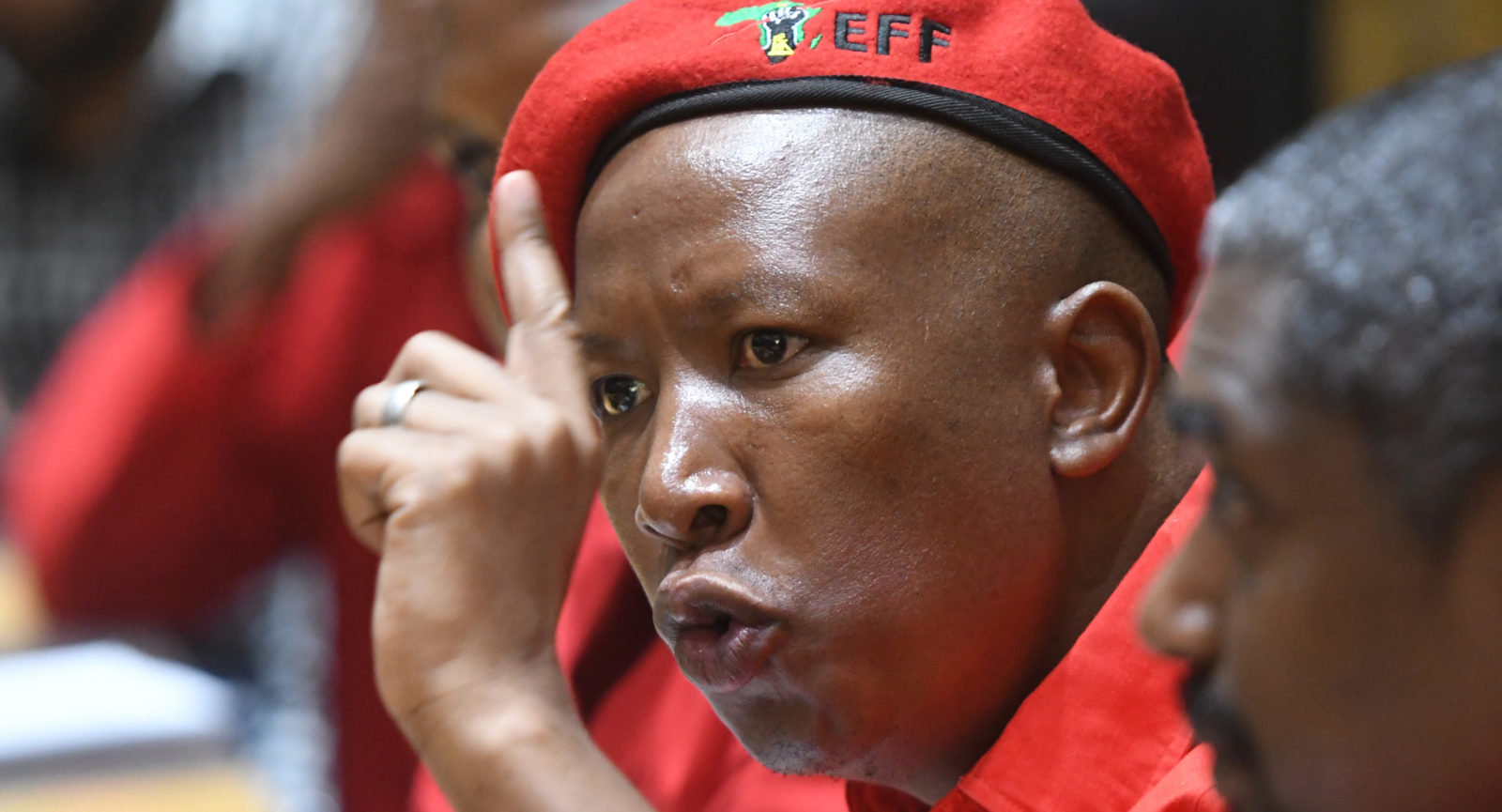 Julius Malema from the Economic Freedom Fighters (EFF) addresses a media conference in response to the resignation of President Jacob Zuma at the Houses of Parliament, Cape Town, South Africa, 15 February 2018. EPA-EFE/BRENTON GEECH

EFF leader Julius Malema on Thursday cast doubt over President Cyril Ramaphosa’s commitment to land reform. He warned that the ANC’s plan to attempt to expropriate land without compensation before amending the Constitution will result in drawn-out litigation.

South Africa’s most strident political supporter of expropriation without compensation, EFF President Julius Malema, has warned the ANC government against its plans to begin expropriating land immediately and accused President Cyril Ramaphosa of misleading voters on his commitment to land reform.

Malema, speaking in Johannesburg after his party’s central command team met over the weekend, called for the Constitution to be amended before land is expropriated.

While the ANC has committed to amending the law, 139 farms have already been earmarked to test the limits of Section 25 of the Constitution and its “just and equitable” compensation clause.

“If you expropriate before [amending the Constitution] you risk a court battle with all those who own properties you seek to expropriate,” said Malema.

“Thus the ANC plan to expropriate 150 farms before a constitutional amendment is a populist move seeking to take credit in the eyes of public opinion.”

The DA and Afrikaner interest group AfriForum have already warned that they may challenge attempts to change the Constitution in court.

The Department of Rural Development and Land Reform is reportedly preparing to defend its current expropriation plans all the way to the Constitutional Court.

The EFF leader was speaking after United States President Donald Trump announced on Twitter that he had asked his Secretary of State to “study the South African farm and land seizures and large-scale killing of farmers”.

Writing in the Financial Times on Thursday, Ramaphosa tried to calm his critics.

“This is no land grab. Nor is it an assault on the private ownership of property,” wrote the president.

“The proposal on expropriation without compensation is one element of a broader programme of land reform that seeks to ensure that all citizens can have their land rights recognised, whether they live in communal areas, informal settlements or on commercial farms. It includes the release of well-located urban land for low-cost housing so that the poor can own property and live close to economic opportunities.”

Malema listed a number of Ramaphosa’s allies in the ANC and said they are not committed to land expropriation and merely want to win public support ahead of the 2019 elections. He accused the president’s faction in the ANC of working against land expropriation, comparing them to the DA and AfriForum.

“We are warning you: Do not play public opinion games with the land question. It is an emotive issue in which people’s dignity is at stake. Our people’s hope cannot be subjected to a contest on public opinion,” said Malema.

The EFF leader said Trump’s comments reflected those presented by white speakers at the hearings into amending Section 25 of the Constitution.

“Donald Trump is not saying anything we have not heard in the hearings,” he said.

“If there is a conviction and not sloganeering and public opinions then we must be prepared for everything. It’s a war,” said Malema on the expected resistance to expropriation.

“We must be prepared for Donald Trump and all of them, we’re not scared of them.”

Under an EFF government, land would first be expropriated from white property owners who are not using their land, said Malema.

Then land would be taken from those with productive land. The EFF wants the state to be the custodian of all land to avoid black farmers selling it back to whites.

He said the party is first pushing for the Constitution to be changed and then it will try to introduce specific legislation on the details of its land reform model.

“They won’t eat title deeds,” Malema said on Ramaphosa’s call in Parliament on Wednesday for people to be given title deeds.

“You are setting our people up for failure when you talk title deeds,” Malema continued.

The EFF leader said the president is ignorant of the dominant public position on land.

“He has committed class suicide. He has lost touch with our people. He doesn’t know the reality on the ground,” he said.

Malema also outlined the party’s plans to lead a motion of no confidence in Tshwane Mayor Solly Msimanga. Msimanga has called for the immediate suspension of city manager Moeketsi Mosola while the City investigates a R12-billion tender.

Mosola is accused of ignoring advice and approving a three-year contract to engineering consultancy firm GladAfrica to manage the City’s infrastructure projects. Msimanga said he should be suspended to avoid interfering in the investigation.

Malema accused Msimanga, who is the DA’s candidate for Gauteng premier, of being inconsistent on the issue. He claimed Mosola exposed the appointment of Marietha Aucamp, who resigned as Msimanga’s chief of staff after it was revealed she did not have sufficient qualifications. Malema said the mayor was seeking retribution against his city manager.

Malema said the EFF would support any party in Tshwane which can present a credible candidate, but it would not vote for Msimanga. The DA has 93 seats in the Tshwane council, the ANC 89, and the EFF 25. The Freedom Front Plus has four. The PAC, Cope and ACDP each have one seat. DM