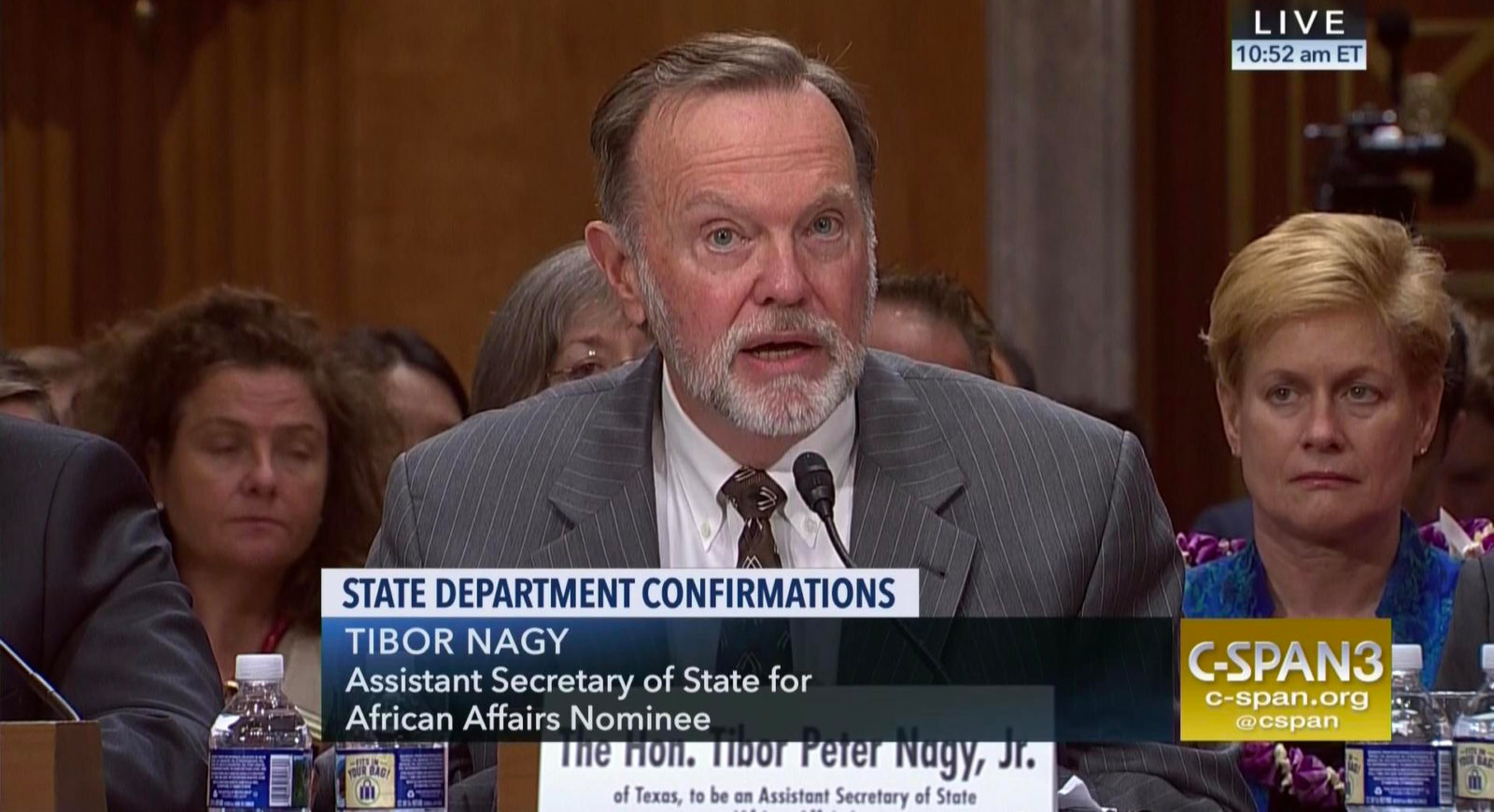 Can Tibor Nagy’s experience bring direction to the US’s policies on the continent?

It took 18 months but US President Donald Trump has finally appointed someone permanent to run the Africa division in the State Department. Some experts believe the White House has left it too late for Tibor Nagy, the new assistant secretary of state for Africa, to give direction to a “rudderless” Africa policy. Many key ambassadorial posts, including in Pretoria, remain unfilled and Trump has soured African relations with gratuitous insults, trade blocks and immigration restrictions.

Nagy, 69, potentially brings stability and normality. Before his last 15 years in academia, he was a career diplomat and a seasoned Africanist who had served as ambassador to Ethiopia and Guinea. And he took a comfortingly orthodox approach to Africa policy at his confirmation hearing in June before the Senate Committee on Foreign Relations.

In essence he urged the US to take advantage of Africa’s huge predicted population boom by providing it with the developmental support it needed to create a well-governed, stable environment which would provide opportunities for US business to take advantage of the huge new market.

Youth, forecast to reach about 70% of the continent’s doubled population of 2.5-billion by 2050, were favourably disposed towards the US and were Africa’s future, rather than the “corrupt dinosaurs who want to stay presidents for life immaterial of the harm they cause their own people”.

Nagy sounded suitably tough on those dinosaurs and their ilk. He promised to use every pressure point to punish the South Sudanese leaders who plunged Africa’s newest country into bloodshed and suffering in 2013. Since his appointment last month, Nagy has also been critical of political repression by Uganda, Tanzania and Zimbabwe.

On the positive side, Nagy assured the US senators he would effectively use the bipartisan Better Utilisation of Investments Leading to Development (BUILD) Act, which is going through Congress, to help boost the development of African countries, largely through supporting private investment. The act will largely do that through the creation of the International Development Finance Corporation (IDFC).

Senator Chris Coons, a Democrat from Delaware, and co-sponsor of the bill, also made no secret about the strategic intentions of BUILD when he told the foreign relations committee that the IDFC, which he said the White House strongly supported, “would shape efforts to counterbalance China’s growing economic influence on the continent”.

It is rather ironic that the BRICS forum (Brazil, Russia, India, China and South Africa) recently created its New Development Bank (NDB), in part to counter what it regarded as Western (especially US) dominance in the World Bank, and now the US is creating the IDFC to counter growing Chinese influence in Africa, including through institutions like the NDB.

Coons noted that creating the IDFC to counter China was in line with the high priority the Trump administration had given “to addressing the strategic competition with China in Africa”.

Some believe that Russia is emerging as even more of a threat than China, citing its growing nuclear cooperation with countries like Zambia and South Africa and its manoeuvring to collaborate with the latter on the UN Security Council from next year.

The Trump administration had been sharply criticised for focusing too heavily on fighting terrorism in Africa at the expense of development and other concerns. But this seems to be changing – at least slightly.

The question now, though, is whether Nagy can effectively wield BUILD and other developmental instruments such as the African Growth and Opportunity Act to correct the wayward drift in US Africa policy.

Judd Devermont, recently appointed head of the Africa programme at the Centre for Strategic and International Studies in Washington, believes it’s a tall order: “Tibor Nagy is an experienced Africa hand, and has already made important strides to reverse a narrative about a rudderless US policy towards Africa. His congressional testimony and social media presence have set a positive tone.”

However, he says, it will take more than words to level-set US policy towards sub-Saharan Africa.

‘Tibor is coming to the party late – perhaps too late to undo some of the damage wrought in the last year and a half. He doesn’t have as many resources as his predecessors and will have to spin deeply unpopular policies on migration and trade,’ Devermont says.

This refers to Trump’s ban on immigrants from several Muslim countries, including some in Africa, and his tough line on trade, including slapping heavy tariffs on South African steel and aluminium imports.

“He probably will not have the wasta (clout) to sway other department and agency heads to revisit their policies towards Africa.… However, I remain optimistic that Tibor and his inter-agency colleagues can make modest improvements.”

He agrees that Nagy’s “seasoned hand… brings stability and continuity to the African Bureau”, but adds that precisely because “Africa does not appear to be a priority of the Trump administration, Ambassador Nagy will operate with greater autonomy than some past assistant secretaries”.

So, Nagy will have a steady hand on the tiller. But will his hand be stronger than the many other hands that might also try to grab the tiller, like the military, the US Trade Representative, the immigration office, and indeed, perhaps, Trump himself? DM