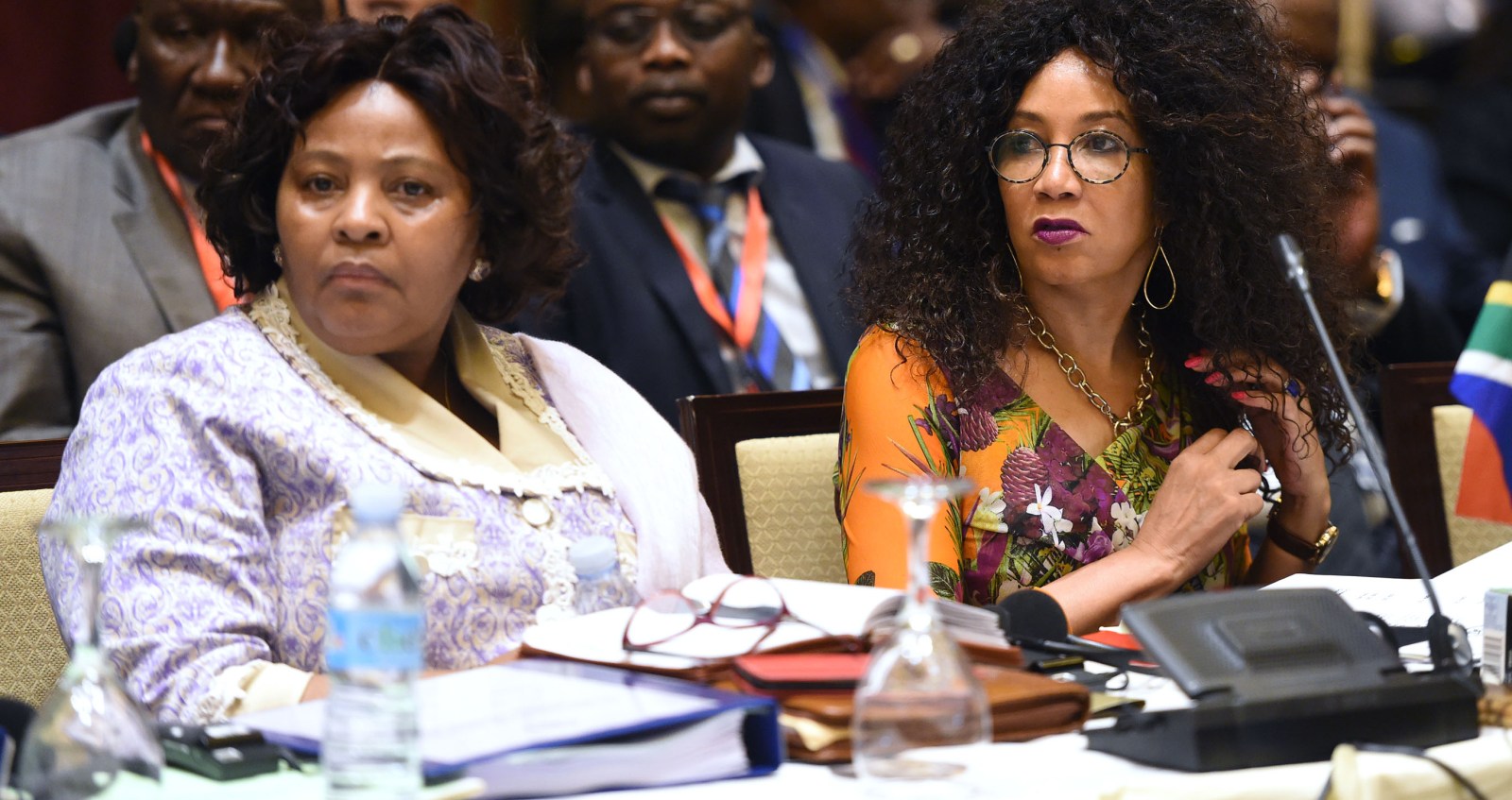 Minister of International Relations and Co-operation, Ms Lindiwe Sisulu, with Defence and Military Veterans Minister, Ms Nosiviwe Mapisa-Nqakula, at the 20th Meeting of the SADC Ministerial Committee of the Organ (MCO) on Politics, Defence and Security Co-operation, in Luanda, Republic of Angola. 22/06/2018; Photo: Yandisa Monakali

Nosiviwe Mapisa-Nqakula wants to ensure “no body-bags come back to South Africa”.

The South African government is opposing UN plans to reduce the Force Intervention Brigade (FIB) in the eastern Democratic Republic of Congo (DRC) because Pretoria fears that could weaken it and make South African and other regional troops more vulnerable to increasingly aggressive rebel forces.

“It is my responsibility as minister of defence to ensure no bodybags come back to South Africa,” SA Defence Minister Nosiviwe Mapisa-Nqakula bluntly told the Dirco in-house news agency last week.

“We must ensure decisions taken as regards the FIB do not disrupt or disadvantage the force and make sure it doesn’t suffer casualties.

“By deploying (troops) you are not saying people should go and die.”

Mapisa-Nqakula complained of “unilateral” UN directives to the FIB which were creating problems for the Southern African Development Community (SADC) by putting its troops “in a vulnerable situation”.

The FIB comprises troops and equipment from three SADC member states – South Africa, Tanzania and Malawi. It is part of the wider UN peacekeeping mission Monusco but has a more aggressive mandate to eradicate the many armed groups which terrorise eastern DRC.

It was created in 2013, initially to neutralise the Rwanda-backed M-23 rebel group which dominated eastern DRC. It did that but since then has had much less success in trying to knock out the many other armed rebel groups in the region.

Mapisa-Nqakula said SADC ministers planned to meet with the UN Department of Peacekeeping Operations on the sidelines of the UN General Assembly in New York in September to discuss their concerns about the weakening of the FIB. .

The minister did not explain exactly what SADC’s concerns were. However, UN Secretary-General Antonio Guterres issued a report on Monusco on 2 July in which he indicated that a joint United Nations-SADC task force had proposed that the FIB should be made smaller.

He said it had been determined that “the Intervention Brigade would be reconfigured to make it more flexible, agile and able to conduct both offensive and protection of civilians operations across North Kivu.

“Two infantry battalions will be reduced to allow the generation of additional enablers that would improve manoeuvrability and enhance effectiveness.

“Additional enablers to be generated or reconfigured include a special force company, a strengthened intelligence cell and a composite utility/attack helicopter unit. The reconfigured Intervention Brigade is expected to be fully operational by 30 September.”

However, this report is vague on detail. It also suggests that the UN’s intention is to make the FIB more efficient whereas South African officials say the changes are motivated mainly by drastic cuts in UN funding for peacekeeping operations.

Heitman said he believed that as a result the UN decided instead to restructure the FIB in such a way as to reduce its cost to a level where the UN could continue to pay for the Rooivalk detachment, but also not lose too much ground force capability.

He said this was when the UN had proposed to drop one of the three infantry battalions – probably that from Malawi which had been the least active – and to add a special forces company and some other specialised elements.

Officials partly corroborated Heitman’s account, but one said it seemed that the UN proposed instead to slash several hundred soldiers from Malawi and Tanzania’s battalions but without eliminating either of them.

And Léonard She Okitundu, DRC’s Deputy Prime Minister and Minister for Foreign Affairs, told the UN Security Council in March that his government regretted that it had not been consulted on the withdrawal of Tanzanian artillery and South African aircraft. It is not clear if the UN has also reconsidered its original decision to withdraw the Tanzanian artillery.

Though funding is clearly an issue, the proposals to restructure the FIB may also originate, partly, from an investigation into the attack by rebels on Tanzanian forces in the FIB in Beni, North Kivu on 7 December 2017 in which 15 Tanzanians were killed and 43 other peacekeepers were wounded.

It was the bloodiest attack against Monusco, which has been deployed in DRC since 1999, and the worst against any UN force since the death of 24 Pakistani peacekeepers in Somalia in June 1993.

The UN investigators led by Russian Dmitry Titov who probed the Beni attack “found a number of gaps in the training and posture of Monusco and its Force Intervention Brigade,” the UN said in a statement in March.

“Moreover, the investigation team noted that the mission did not have an actionable contingency plan to reinforce and extract its peacekeepers during the attack.

“Issues of command-and-control, leadership and lack of essential enablers such as aviation, engineers and intelligence were also major obstacles and need to be addressed urgently,” it added.

Titov’s investigators said “all available evidence” indicated the attack was carried out by the ADF, a particularly nasty rebel group dominated by hardline Ugandan Muslims.

In his report on Monusco in July, Guterres said the security situation had deteriorated markedly over the last three months in North Kivu and South Kivu provinces, mainly because of renewed activities by Mai-Mai groups and the ADF.

“In reaction, local populations repeatedly expressed their frustration with the national security forces and Monusco through a series of demonstrations and frequent stoning of Monusco patrols and bases.” DM