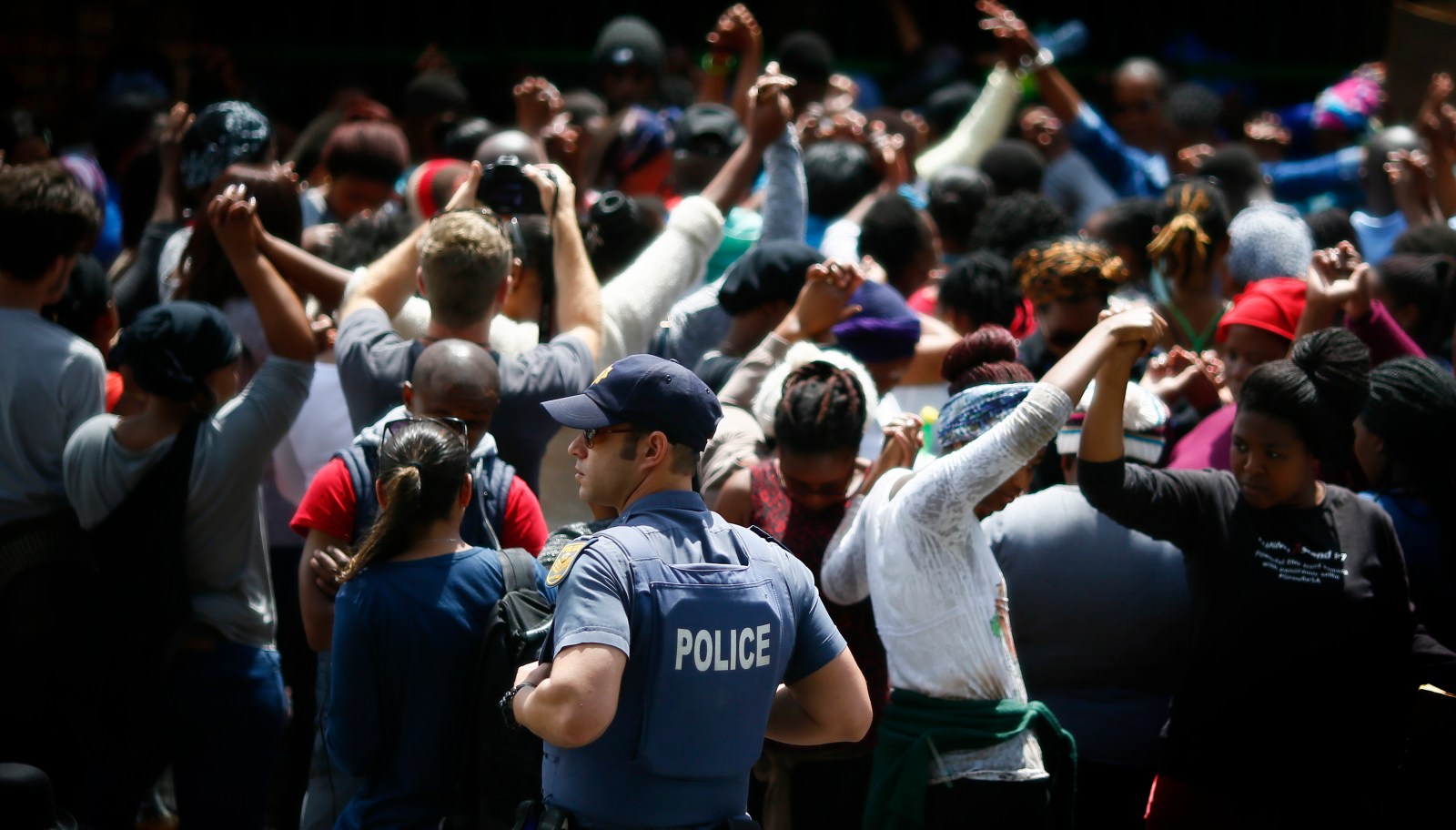 A South African policeman watches residents of Masiphumelele and some members of the greater south peninsula community as they pray during a protest for the release on bail of community leader Lubabalo Vellem outside the Simonstown Magistrates court, Cape Town, South Africa 30 October 2015. EPA/NIC BOTHMA

The Social Justice Coalition has argued in the Constitutional Court that it is unlawful and unconstitutional to criminalise public protests. However, the state contends that doing so is meant to deter unlawful protest and public violence.

On Tuesday, 21 August 2018, the Constitutional Court heard arguments pertaining to an “order of constitutional invalidity” made by the Western Cape High Court in declaring it unconstitutional for the state to make it a criminal offence to hold a protest with more than 15 people without giving prior notice to the responsible officer of a municipality.

Members of the Social Justice Coalition (SJC), a social movement that seeks to advance the constitutional rights of people in informal settlements, were found guilty of convening an illegal protest at the Cape Town Civic Centre in September 2013 by the magistrate’s court in Bellville, after they had chained themselves to the railing of the building in an attempt to attract the attention of the Cape Town Mayor.

The protest was in response to dangerous and inadequate sanitation facilities in Khayelitsha. And although the demonstration was peaceful and non-violent, it eventually grew in size.

According to the Regulation of Gatherings Act 205 of 1993, not more than 15 people may convene a public protest gathering without giving prior notice.

However, in January 2018, Western Cape High Court Judge Thandazwa Ndita delivered a landmark decision by overturning the conviction of the “SJC10”. The High Court declared section 12(1)(a) of the Regulation of Gatherings Act “unconstitutional and invalid” as the criminal sanctions imposed by the act was “disproportionate to the offence”.

Advocate Michael Bishop from the Legal Resources Centre argued for the applicant in the Constitutional Court that this particular section makes the SJC10 solely responsible for exercising their constitutional right enshrined in Section 17 of the Constitution.

According to Bishop the limitation to Section 17 which guarantees freedom of assembly requires justification, which the state failed to do. The purpose of the protest, he argues, was for an admirable goal, which was to engage the City of Cape Town to provide proper sanitation facilities in Khayelitsha.

And the only way to get their point across was to convene a protest without notice, which was non-violent.

The purpose of the Regulation of Gatherings Act, says Bishop, is not to limit the right of assembly but for members of the public to enjoy the protection of the state.

Bishop conceded that measures put in place in the act are to ensure that the meeting will go ahead with the support of police and Parliament and also to avoid civil liability on the convener if there is damage to property.

“We are happy with the regulations without criminalisation,” said Bishop.

The complaint therefore is not about the requirements for notice but the criminalisation of those who do not give notice, even if the protest is peaceful.

Bishop went on to highlight the importance of the right to assemble, which is largely used by people without political power, those who are powerless in society. He went on to state how central this right is to the achievement of justice and how it enables fulfilment of other rights; in this case for the improvement of sanitation facilities in Khayelitsha.

Although it does not discourage gathering, there is punishment for the person who organises the protest – the convener.

Advocate Geoff Budlender, representing Right2Know, a friend of the court, argued that in the real world this act inhibits the right and freedom to assemble as a protest only takes place because someone organises it, whether it is by an agitator in apartheid days or a social activist in democratic South Africa.

If the convener is criminalised, said Budlender, there will be no gathering, which has a direct impact on people’s right to exercise section 17.

Furthermore, Budlender contends that it is only the wealthy that can have representation, use litigation and make submissions to the courts. However, for people in the margins, this is the most accessible means of public expression.

“The limitation cuts at the main rights of members of the public,” said Budlender.

He went on to recommend administrative penalties such as a fine, which might be suitable for not complying with the Act, rather than a criminal offence.

Buhle Lekokotla, representing United Nations Special Rapporteur, as a friend of the court, argued that if the requirements for notice are modest as the state insists, then the failure to comply should not invite the harshest possible punishment.

According to Lekokotla, international law is moving away from imposing criminal charges for protest without notice because they have the effect of penalising peaceful protests.

Although R2K says administrative penalties may serve as better punishment, it still presupposes a criminal offence and may be a stumbling block to the poor who can’t afford to pay a fine. Which will ultimately lead them back to the courts.

Advocate Karrisha Pillay, representing the state and Minister of Police, argued that the constitutionality of section 12 (1)(a) of the Regulation of Gatherings Act that insists on a notice to be given prior does not impede the right of assembly, but goes a long way in facilitating it.

According to Pillay, the background to the protest in 2013 is that the SCJ10 knowingly chose not to comply with the order but subverted it because they were frustrated.

“The purpose of the act is to ensure proper planning and management, whereas in the absence of such, there will be a lack of a proper deployment of resources which will have a higher risk in protests not remaining peaceful,” said Pillay.

Once the preliminary planning process is done, marshals within the protesting group are chosen, as people are far more willing to co-operate with marshals from within that gathering than police.

However if notice is not given there is a risk that insufficient police will be deployed, thereby infringing and risking the freedom of assembly of others present when violence occurs.

Pillay went on to stress that the act does not prohibit a gathering itself, but rather the mischief in the conduct of the convener who should provide notice in time – and that notice requirements are a simple process that don’t have the effect of negating the right to assemble but actually facilitate it.

Justice Dlodlo interrupted Pillay to comment on the convener.

“If you want to save yourself from a dangerous snake you simply crush its head, and the convener is the most important person. If the act criminalises the actions of the convener, it deters the gathering from happening altogether,” said Justice Dlodlo.

“It does not have the effect of deterring the right because it can still be exercised,” replied Pillay.

In his closing comments Bishop argued that the term convener, being the person who gives notice of the gathering or takes part in the organising of the gathering, has a broad definition in the act.

“If I give verbal or written notice of the gathering either through WhatsApp, Facebook or send a tweet, by this definition I may be considered a convener,” said Bishop.

Justice Cameron closed the session and judgment is reserved. DM