Kofi Annan – a man who cared for humanity

Kofi Annan was a man I trusted. Why? Because he cared. The Kofi I knew was authentic.

There walk among us those who carry a magnetism of our shared humanity and radiate that positive energy with humility and a softness that engenders Trust. Kofi Annan was such a person.

He carried that Madiba Magic effortlessly. Selflessly. Touching the lives of millions. I trusted him. I admired him. I saw in him a “servant leader”. It is a trait so lacking in global political leaders today.

I remember his wise words exchanged with him on the occasion of the Mandela Centenary Celebrations in Johannesburg, just a month ago. We shared our hopes and aspirations for the future of SA, Africa and the world.

The turbulence we felt is growing. Chaos, war, conflict, violence against innocent women and children is exploding. We discussed the volatile, uncertain world we leave to young people. They face an ecological emergency, growing inequality and exclusion. They feel betrayed by those in power. Those of our generation. In business, politics and even civic society. Everywhere.

We committed to work together to build those pathways of Hope and Opportunity for young people, especially in Africa. Our young talent should not be fleeing the continent looking for brighter futures outside. We have the wealth of the global resources on our continent. We have the youngest demographic profile that could power the global economy. If we only had leaders who served our people. Leaders who had the political will to do the right thing. To make choices that put the lives of our people at the centre, not the personal self-interests or that of their families and friends.

As his Kofi Annan Foundation echoes in its website:

“More than half of the world’s population is under the age of 30. Young people tend to be hardest hit by the world’s inequalities and injustices. Their voices often go unheard, even though they will inherit the consequences of decisions made today.”

His reflections on this were pertinent to these troubled times.

“To live is to choose. But to choose well, you must know who you are and what you stand for, where you want to go and why you want to get there.”

And it was a question which we should all ask ourselves: Who am I? What is the purpose of my life?

I believe Kofi Annan knew who he was. He understood his purpose. He was not a pretender. Neither was he a saint. He was a man, a leader who recognised his frailty. His mistakes.

On the 10th anniversary of the Rwandan genocide, Annan acknowledged his shortcomings.

“I myself, as head of the UN’s peacekeeping department at the time, pressed dozens of countries for troops,” he said in 2004.

“I believed at that time that I was doing my best. But I realised after the genocide that there was more that I could, and should, have done to sound the alarm and rally support. This painful memory, along with that of Bosnia and Herzegovina, has influenced much of my thinking, and many of my actions, as secretary-general.”

How many world leaders display such honesty?

“Annan, the second African to lead the United Nations, was 80 years old when he passed away peacefully on Saturday after a short illness,” the Kofi Annan Foundation said.

Annan served two terms as UN chief from 1997 to 2006, and was awarded a Nobel Peace Prize in 2001 for his humanitarian work.

He solidly embraced the sacred feminine.

“Gender equality is more than a goal in itself. It is a precondition for meeting the challenge of reducing poverty, promoting sustainable development and building good governance.”

He never hesitated to plead for unity.

“More than ever before in human history, we must understand we share a common destiny. We can master it only if we face it together. And that, my friends, is why we have the United Nations.”

Kofi Annan remains “a global statesman and a deeply committed internationalist who fought throughout his life for a fairer and more peaceful world. Wherever there was suffering or need, he reached out and touched many people with his deep compassion and empathy,” his foundation said.

Unafraid to speak truth to power, he argued that “ignorance and prejudice are the handmaidens of propaganda”.

“Our mission, therefore, is to confront ignorance with knowledge, bigotry with tolerance, and isolation with the outstretched hand of generosity. Racism can, will, and must be defeated,” Annan said.

His life philosophy reflected these ideals.

“Tolerance, intercultural dialogue and respect for diversity are more essential than ever in a world where people are becoming more and more closely interconnected. We may have different religions, different languages, different coloured skin, but we all belong to one human race.” 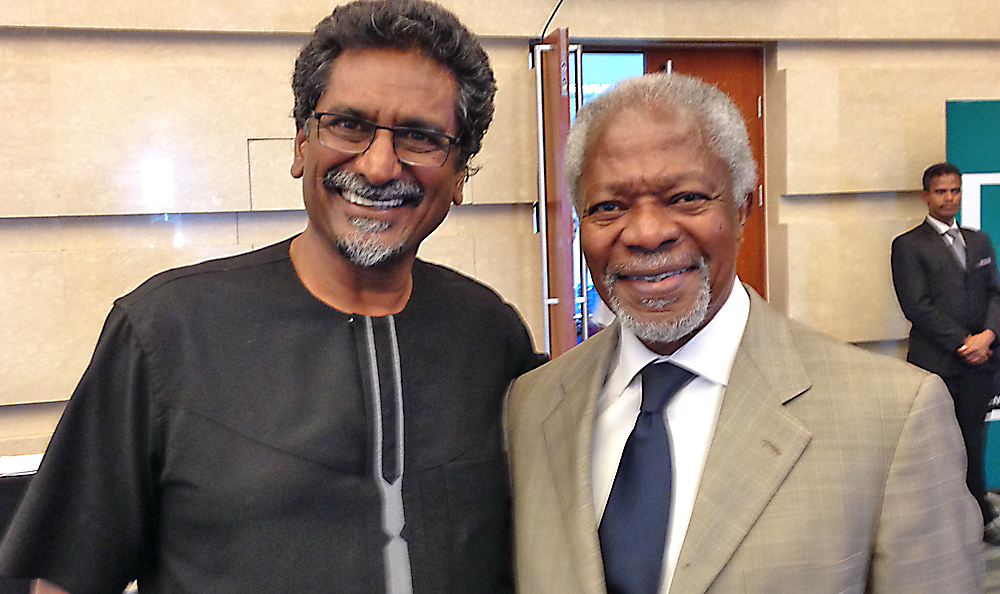 That’s the Kofi Annan I remember. His philosophy I trust. Let’s make it a legacy by living it. DM