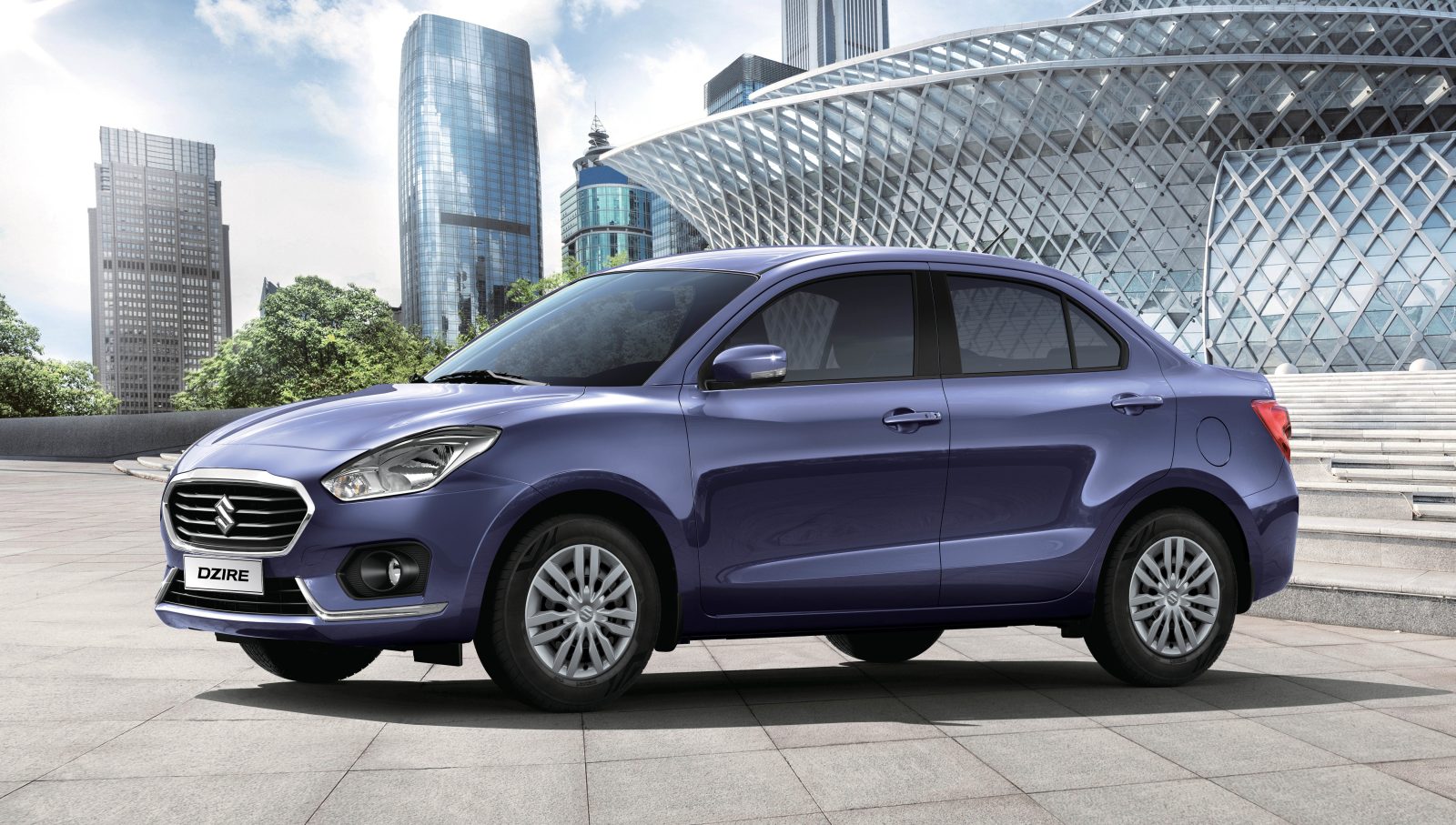 Desire might be a strong word to associate with a pragmatically configured, value-focused small sedan. But the latest Suzuki Dzire really delivers on other, more practical levels. It’s also a lot more attractive than its predecessor …

While the budget car market is dominated by hatchbacks these days, there’s still a case to be made for small sedans.

Some buyers simply prefer the more conservative – or shall we say, more mature – styling these little sedans typically exude. Others may value the additional security provided by a lockable boot, which is also often larger than the hatchback’s more exposed luggage compartment. 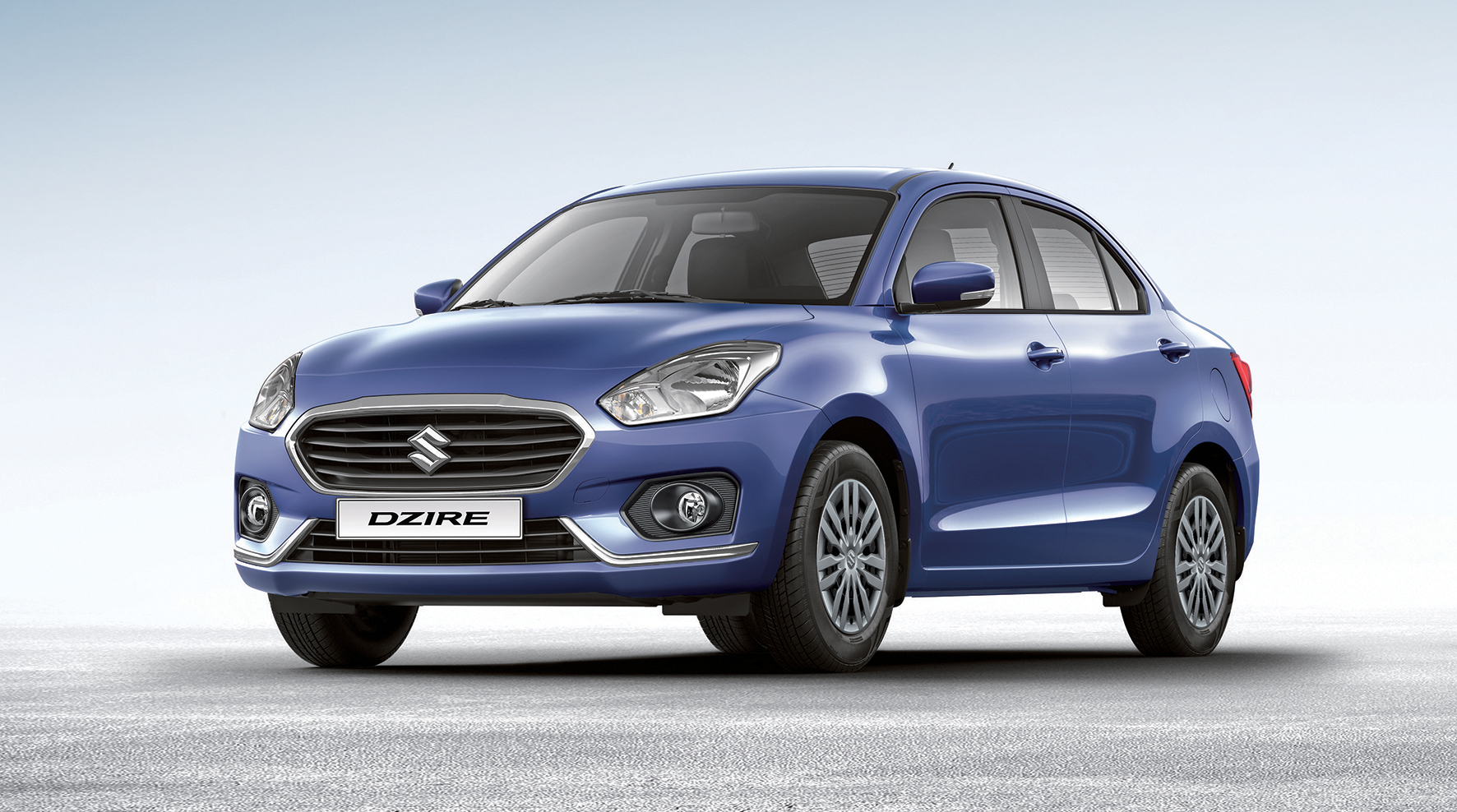 Regardless of reason, many budget hatchbacks are therefore partnered by three-box sedan stable mates: Ford’s Figo and the Toyota Etios, for example, can both be had in hatch and sedan versions. The Honda Brio is called the Amaze in sedan guise, and the Suzuki Swift’s sedan sibling is badged the Dzire.

Both the Swift and the Dzire are brand-new models, launched in May – and this time round, the Dzire is less of a Swift derivative, sporting a look that’s less dependent on the hatchback and all the more convincing for it.

It does share the new Swift’s platform, with commensurate benefits as far as reduced weight and more efficient packaging are concerned. The result is a sedan that is lighter, but also significantly more spacious, than its predecessor. 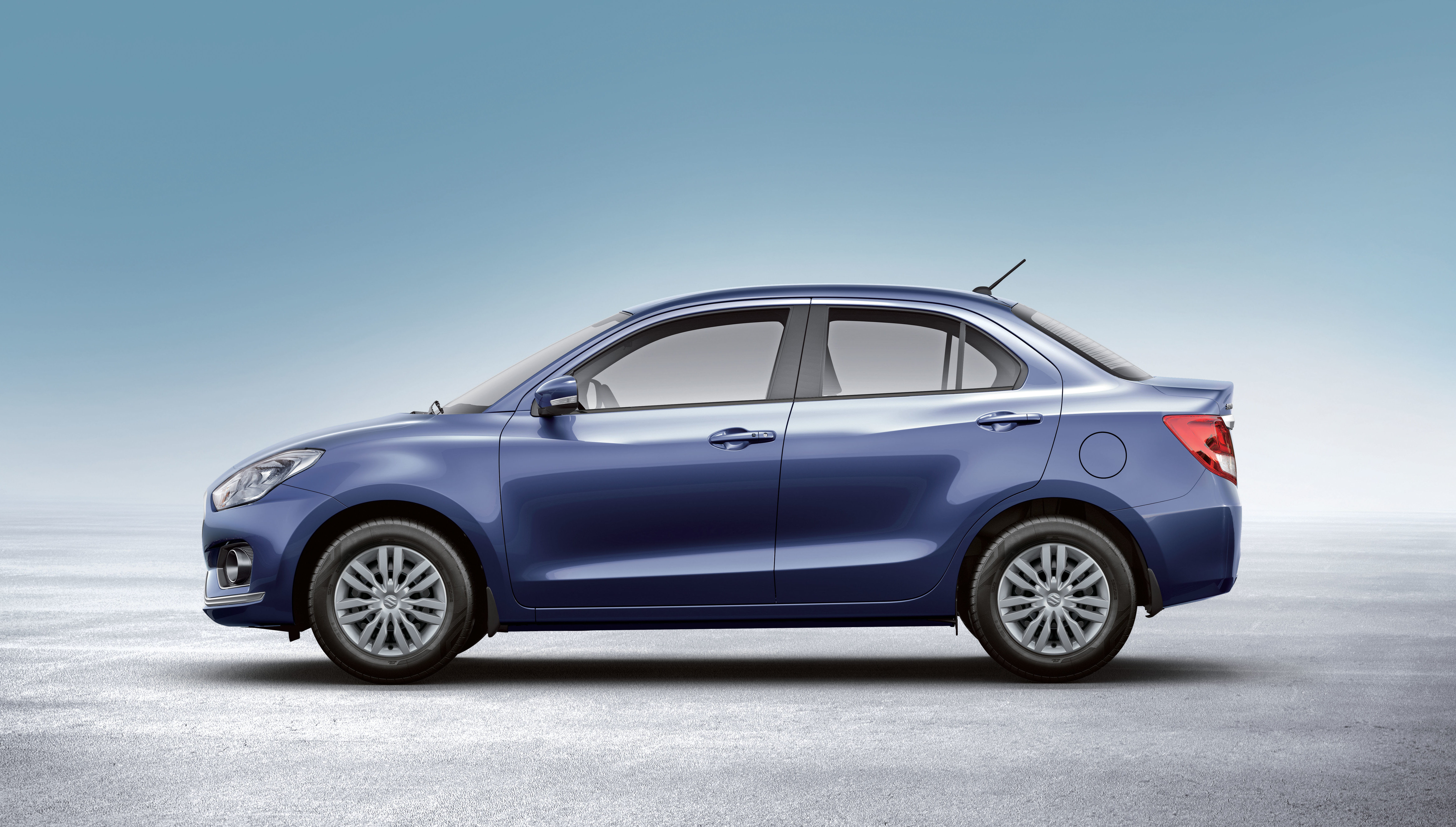 However, it’s the new Dzire’s styling that initially catches the eye – and rightly so. In it lat3est guise, the four-door shape is far more visually cohesive than its rather ungainly predecessor, which looked as if the boot had been tacked on as an afterthought.

The new version is not only distinctive and more aesthetically convincing, but it’s also more streamlined, making it 18 percent more aerodynamic that its predecessor. The result is a smoother, smarter design with a character that’s quite different from the Swift hatchback.

In profile, it’s the smoothly rendered waistline that provides some consistency to the three-box shape, while sculpted flanks and emphasised wheel arches save the silhouette from blandness.

The pert rear is short and relatively high, but allows for a surprisingly spacious, deep boot credited with a very useful 378 litres of luggage space – 28 litres more than before.

The rear view continues the more mature, more streamlined approach, with chrome detailing above the number plate holder and a bootlid shaped to incorporate a subtle boot spoiler.

The Dzire’s interior is virtually identical to that of its Swift hatchback stable mate, except that the rear bench seat is a one-piece fixed design, securely isolating the boot (and its contents) from the cabin. The downside is that luggage space cannot be extended by folding the rear seat flat.

The interior is smart in a monochromatic, understated kind of way. The seats are trimmed in a dark grey patterned fabric, which matches the charcoal plastics nicely.

On that subject, the plastic bits on the top of the dash, and the door panels, look attractive enough, but the hard surfaces are surprisingly low rent on closer scrutiny – Suzuki could do better in this department. 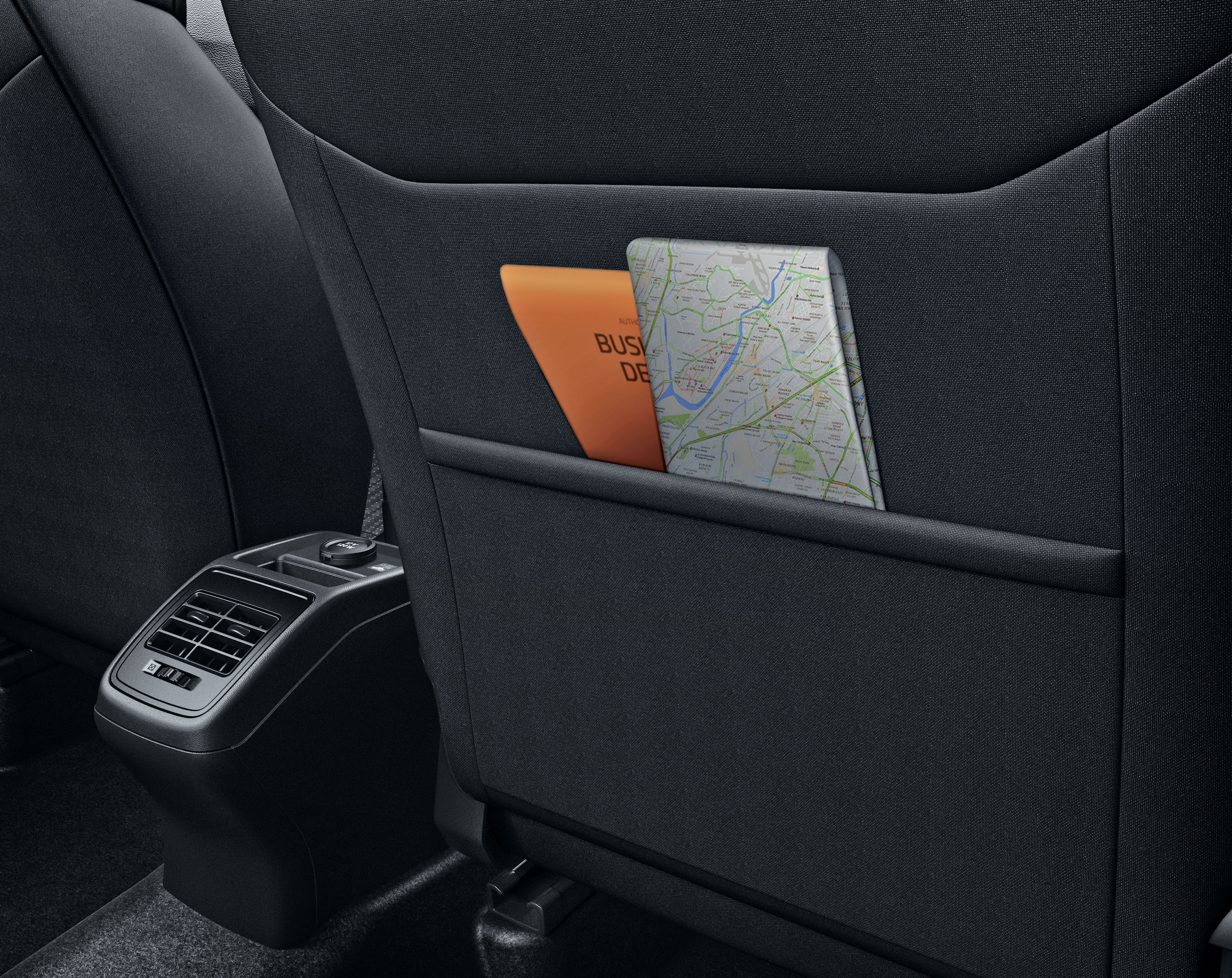 The dashboard plastics also have a way of reflecting the sun onto the windscreen, especially when overzealous car washers have added to the gloss with some silicon spray, which compromises visibility.

There’s little to complain about in ergonomic terms, though: recessed analogue dials for speed and rev count populate an instrument binnacle that also contains a digital trip computer, as well as a digital fuel gauge. 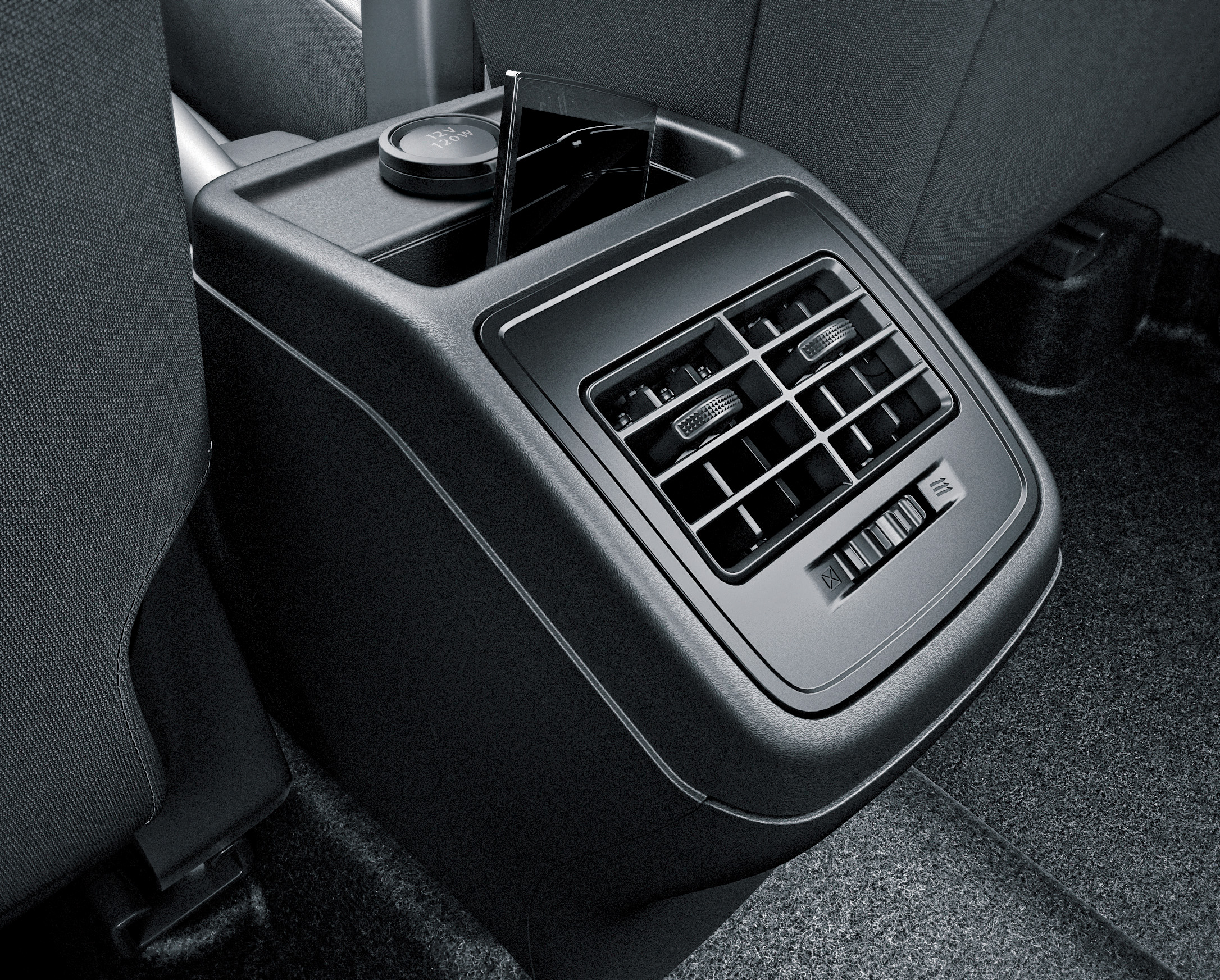 The instrument cluster is nicely framed by a flat-bottomed steering wheel that also incorporates controls for the sound system and hands-free telephony. Again, the steering wheel frame feels a little plasticky, and it’s tilt-adjustable only.

The centre stack features a fairly basic entertainment system incorporating a CD player and FM/AM tuner with an LCD display. It also supports Bluetooth-based hands-free calls and audio streaming, as well as USB connectivity and a stereo auxiliary jack. 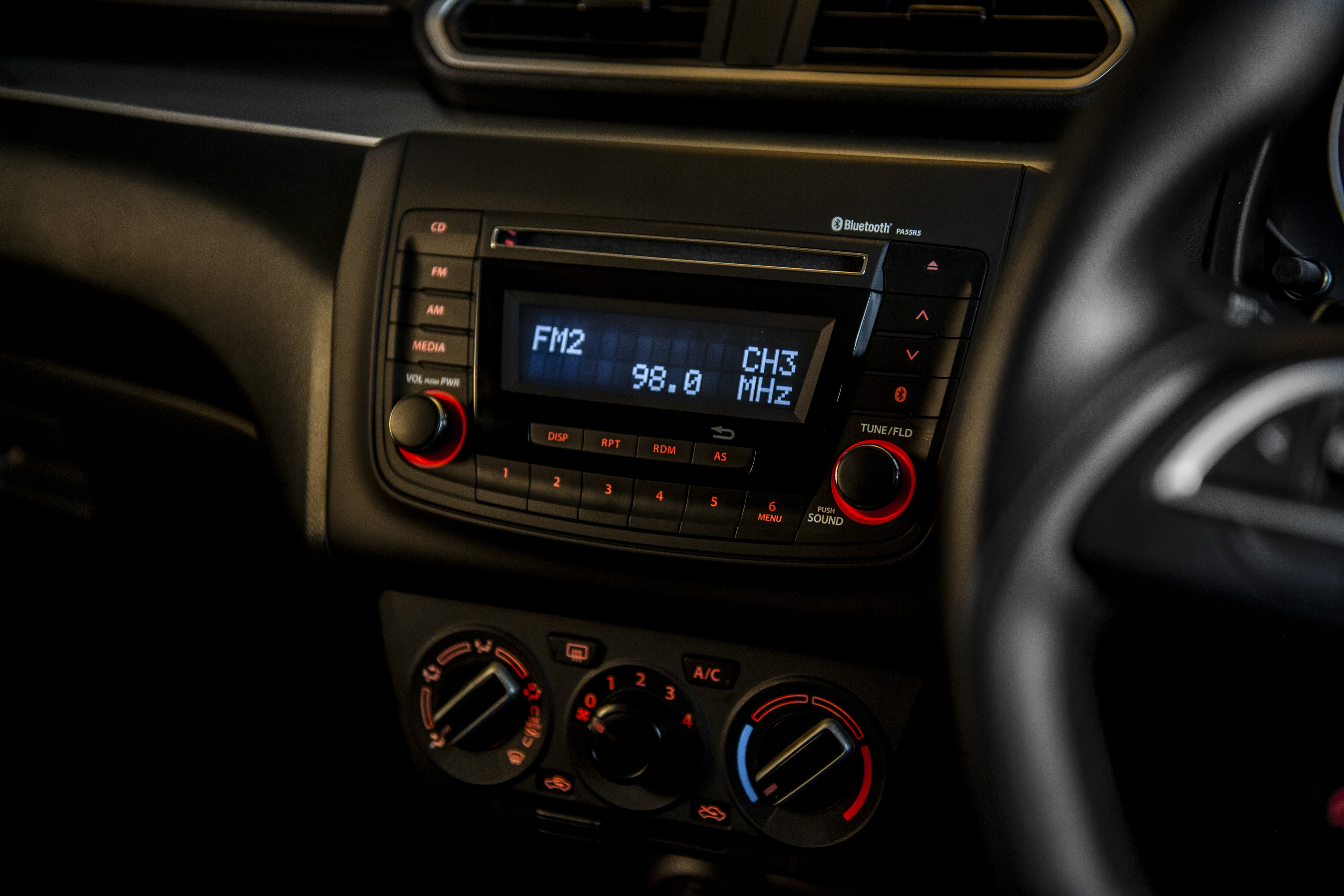 Given the Dzire’s compact dimensions and useful luggage compartment, the generosity of the rear accommodation comes as a real surprise. It’s spacious, even for adults, with plenty of leg and shoulder room, creating a big-car feel quite at odds with the Dzire’s compact size.

Rear passengers get their own air vent and a separate 12V socket – useful for appliances, or charging phones. There’s also a fold-down armrest incorporating two cupholders. 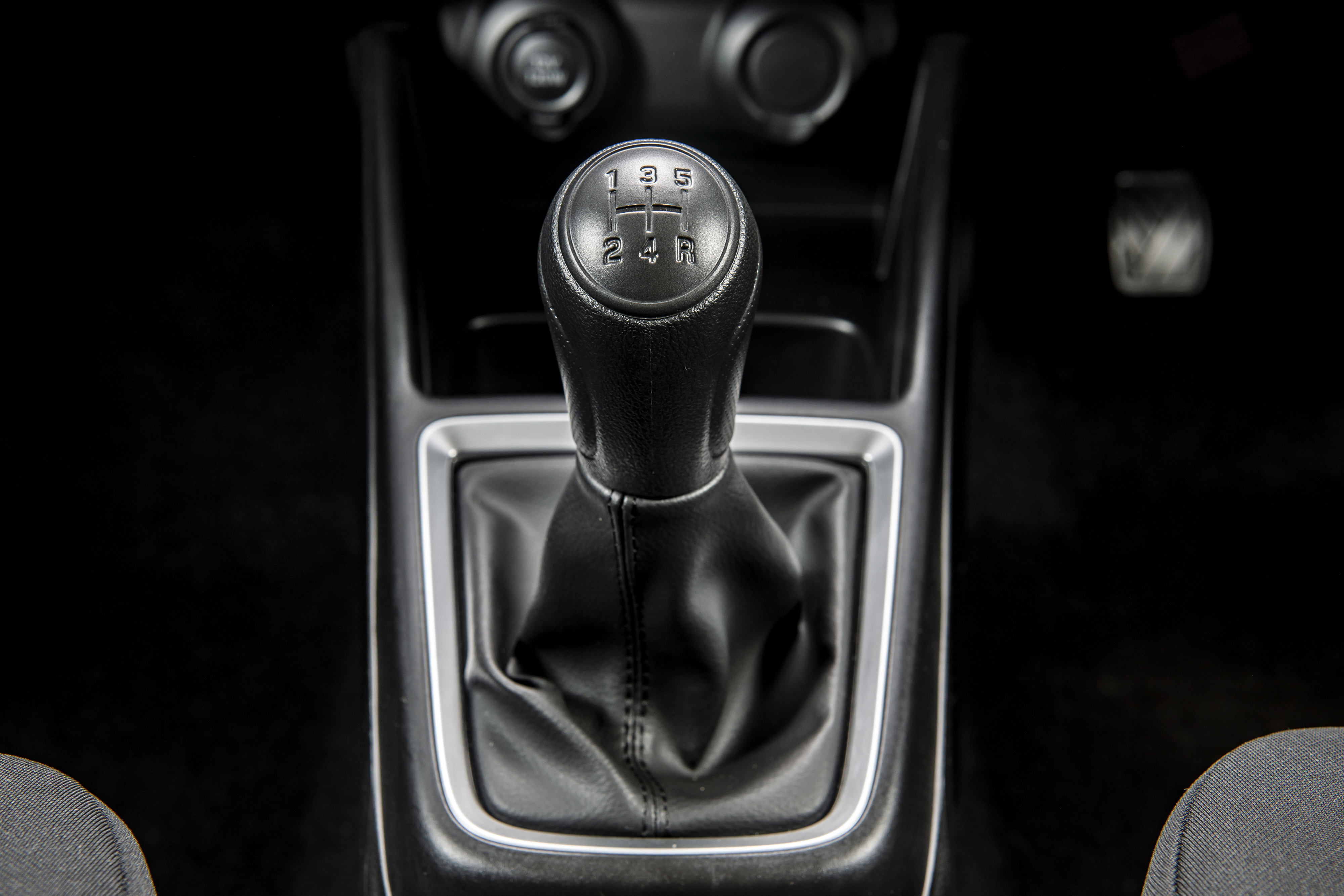 Despite its relatively plain and practical appearance, the cabin packs in a fair amount of kit. In addition to the features already mentioned, you get electric windows and mirrors, manual air-con, and remote central locking.

The Dzire is slightly heavier than its Swift hatchback counterpart, but at 890kg it’s hardly a heavyweight – and it’s shed some mass compared to the previous model. That explains why the little sedan is an unexpectedly eager performer.

While it has to make do with a humble 1.2-ltire four-pot engine good for only 61kW of maximum power, accompanied by an equally modest 113Nm of torque, the normally aspirated unit is happy to rev beyond 6,000rpm before the rev limiter steps in.

Add an easy-shifting five-speed manual gearbox with well chosen ratios, and the result is nippy performance that’s fun to explore. Chirping the front tyres on pull-offs is embarrassingly easy!

Of course, the Dzire isn’t really that quick: the claimed 0-100km/h sprint time is completed in a leisurely 11.7sec, and if you find a straight piece of road long enough, it should reach a top speed of 175km/h. 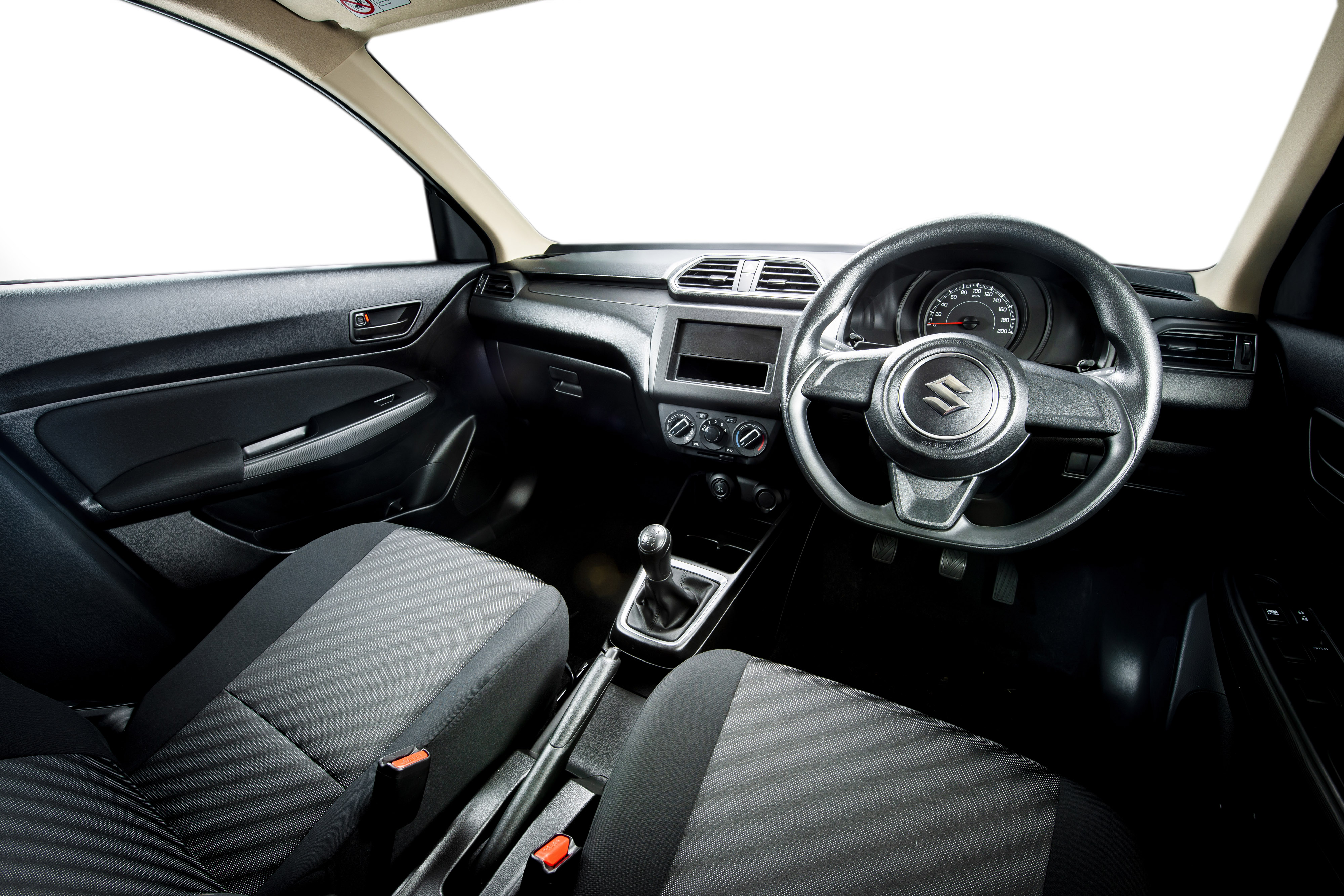 But only petrolheads really care about those stats, and let’s be honest: the Dzire is not a car for petrolheads.

Still, the sedan’s frisky nature makes everyday driving a pleasant experience: there’s enough urge for safe overtaking, and highway cruising at the legal limit is fairly effortless, although steeper inclines will demand use of the gearbox to maintain momentum.

Refinement levels are especially impressive for a small car: the ride is smooth and relatively composed, and while the engine sounds busy when revved hard, noise levels aren’t overly intrusive.

Like the Swift, the Dzire rides on unusually tall 165/80 tyres, which provide a bit of extra give and compliance. That allows the sedan to soak up bumps and dips better than most, without feeling soggy.

The steering isn’t a highpoint, though: it’s markedly over-assisted, and just a little too vague at the centre point. To be fair, the Dzire’s target audience won’t be too perturbed, and will probably enjoy the light steering from an ease-of-use and parking perspective.

Handling is sure-footed enough, and if you do end up negotiating a corner too quickly, benign but progressive understeer will push the nose wide while safety scrubbing off some of that speed.

Fuel consumption might be more of a priority for Dzire buyers, though: Suzuki claims a combined cycle figure of 4.9 litres/100km, but you’d have to drive with a featherlight foot to get close to that claim. 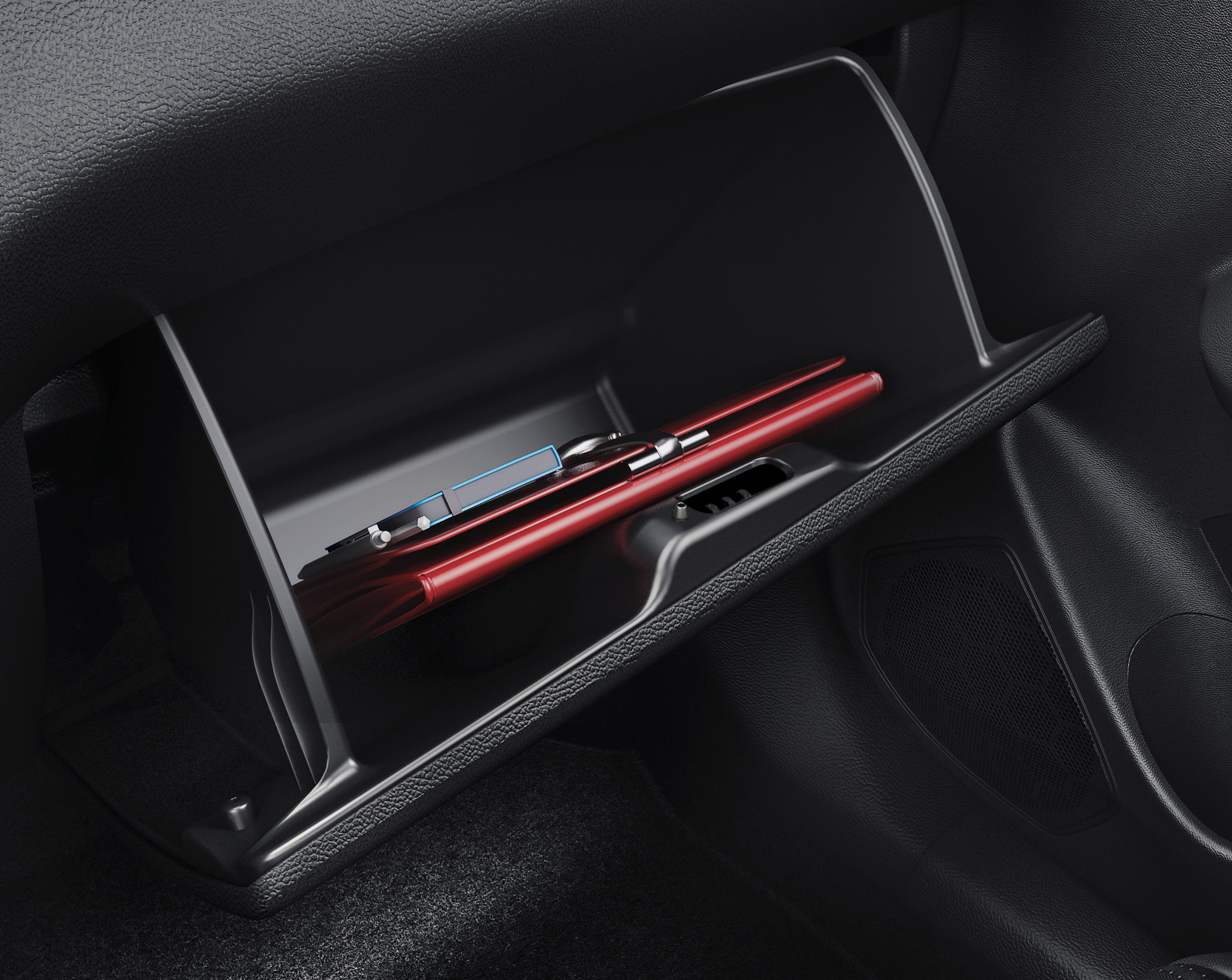 I’d say 6 litres/100km would be a more representative expectation, while those who like exploring the Suzuki’s free-revving nature will end up in the sevens. In fairness, those are still frugal figures, and the Dzire certainly won’t break the bank at the fuel pump.

While the current trend favours hatchbacks, the Suzuki Dzire makes a convincing case for choosing a small sedan instead. The security of a lockable boot is an obvious advantage, while the boot itself is usefully capacious.

Some buyers may find the urbane three-box shape more appealing, especially since this latest model’s aesthetics are a big step up from its predecessor. And then there’s the spacious rear seating to consider, too. 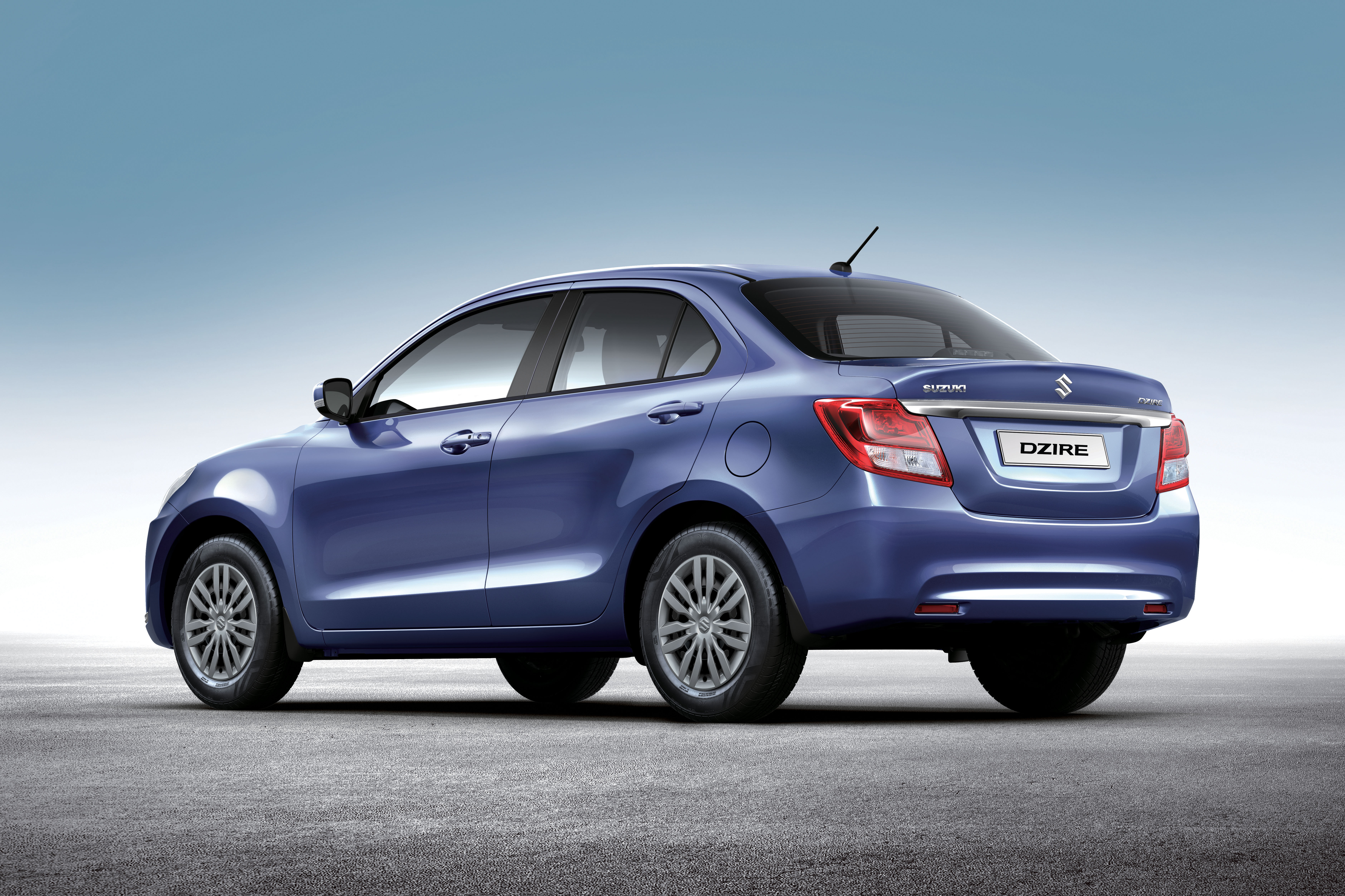 At a shade under R180k, pricing is competitive and reflects fair value, while decent occupant safety, a thrifty appetite for fuel and nippy dynamics complete a keenly configured package..

That said, the identically equipped Swift 1.2 GL hatchback, still priced almost R10k below the sedan, is an even better buy. DM

Plastic bits could be classier.