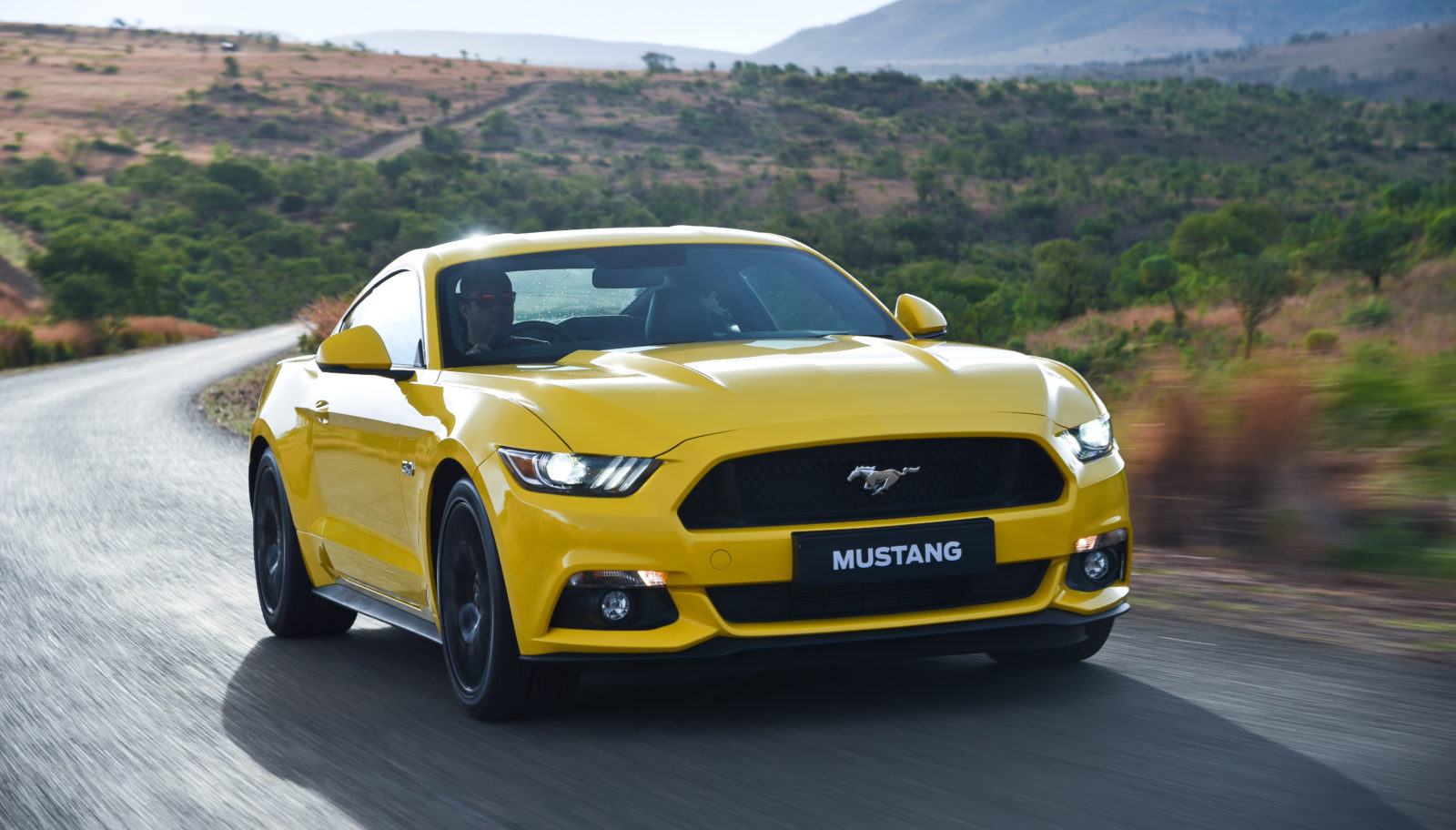 The Ford Mustang is the stuff of legends: a classic two-door sports car that symbolised the American dream when it first appeared 54 years ago, and continues to epitomise American muscle car culture in the 21st Century. But is that enough to warrant an R890k-plus investment?

The year was 1969. An expectant crowd had gathered on the main pier of Port Elizabeth’s harbour. Word had spread that the first two Ford Mustang Mach 1s to reach SA were about to be uncrated on arrival. 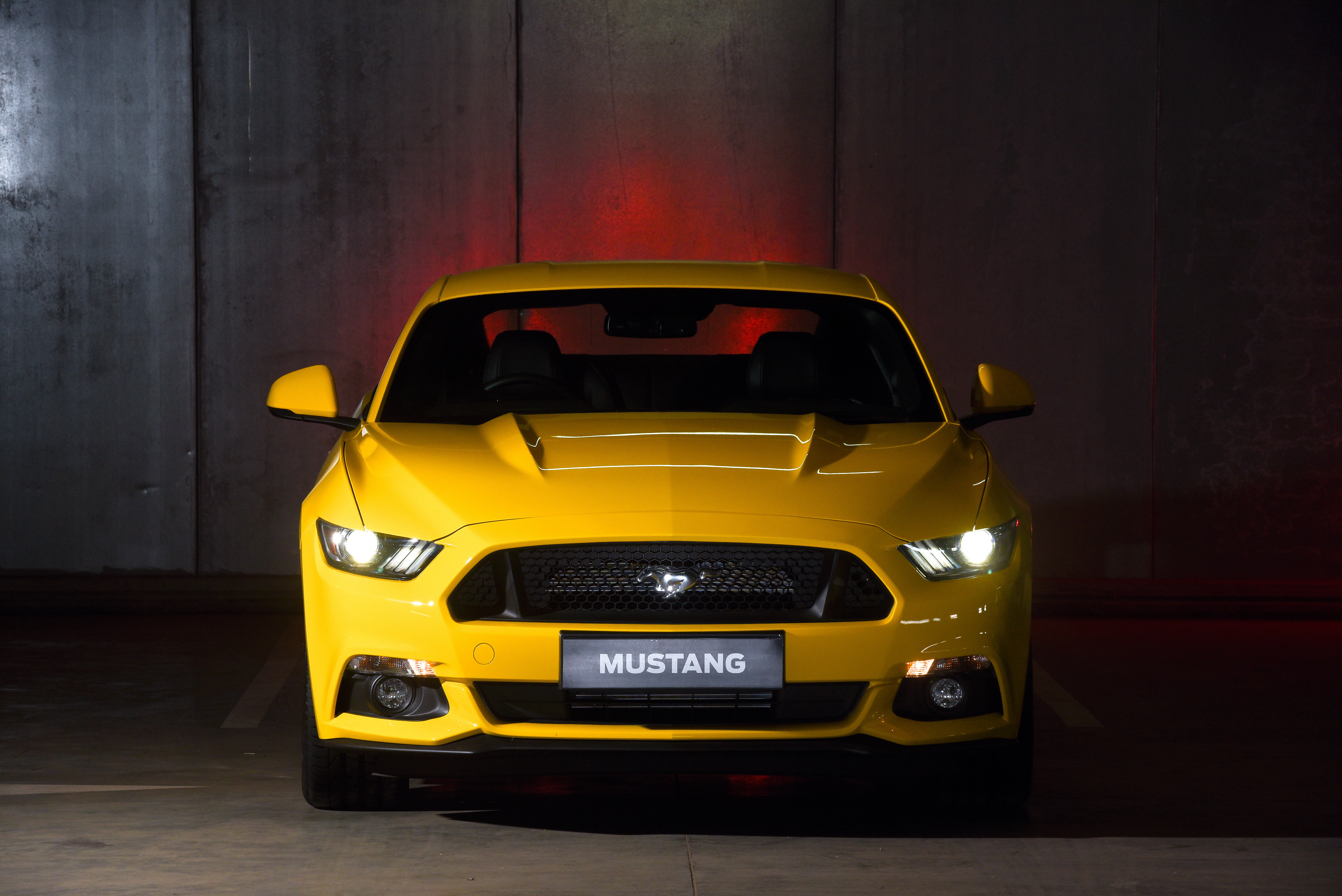 Those were the glory days, when Port Elizabeth was the Motown of South Africa, with Ford and General Motors the biggest players. Almost everyone had a connection with the motor industry – it was the lifeblood of the local economy.

The arrival of something as rare and special as a Ford Mustang was akin to a public holiday. Anyone and everyone was there to witness the American muscle car’s appearance.

I wasn’t even in my teens then, but I remember how almost palpable the excitement was, and how struck I was by the aggressive styling: the forward-jutting grille, the quad headlights, the bulging bonnet decked out in black, and the fat tyres – at least by the Marie Biscuit standards of those days …

Fast-forward almost half a century, and I’m casting my eye over another Ford Mustang – a much more modern one, it has to be said, but one that’s still instantly recognisable as a Pony Car.

Although it’s been available here since 2016, the sixth-generation Mustang still turns heads, and rightly so. The modern iteration’s designers have done well to retain the quintessential styling elements, albeit interpreted in a modern idiom. 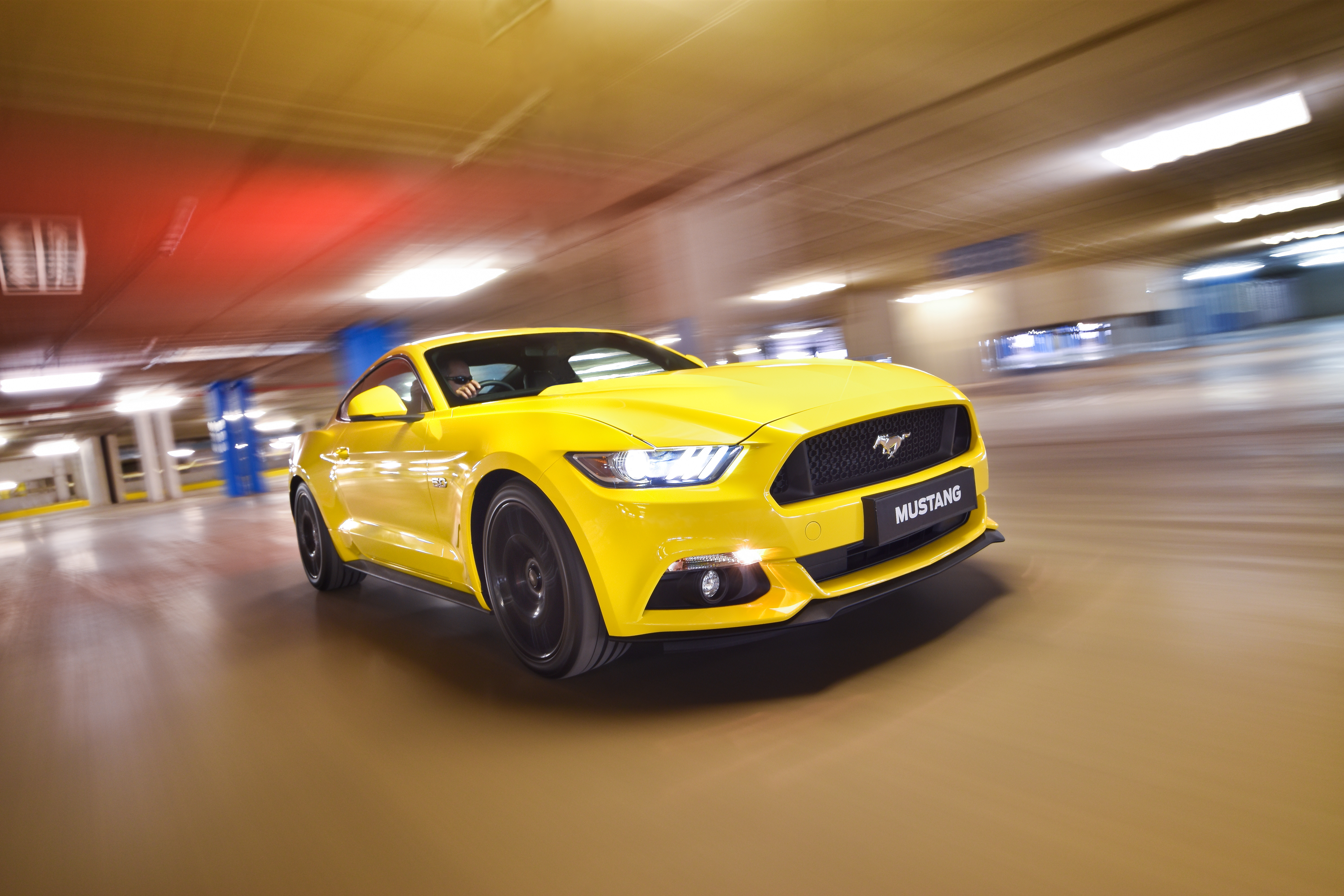 The prowling bonnet and the gaping grille; the sloping fastback silhouette, the steeply raked windscreen and the low roofline; the low-slung, menacing stance and the wide tracks – they’re all pure, undiluted, unmistakably Mustang.

The new-generation Mustang draws more of its stylistic inspiration from that 1969 Mustang Mach 1 than the smaller, tidier 1964 original. There’s a meaty assertion, a body builder’s swagger, to the shape, underscored by the pronounced haunches, the grille’s proud underbite, and the big-bore exhausts jutting out from either side of the rear diffuser. 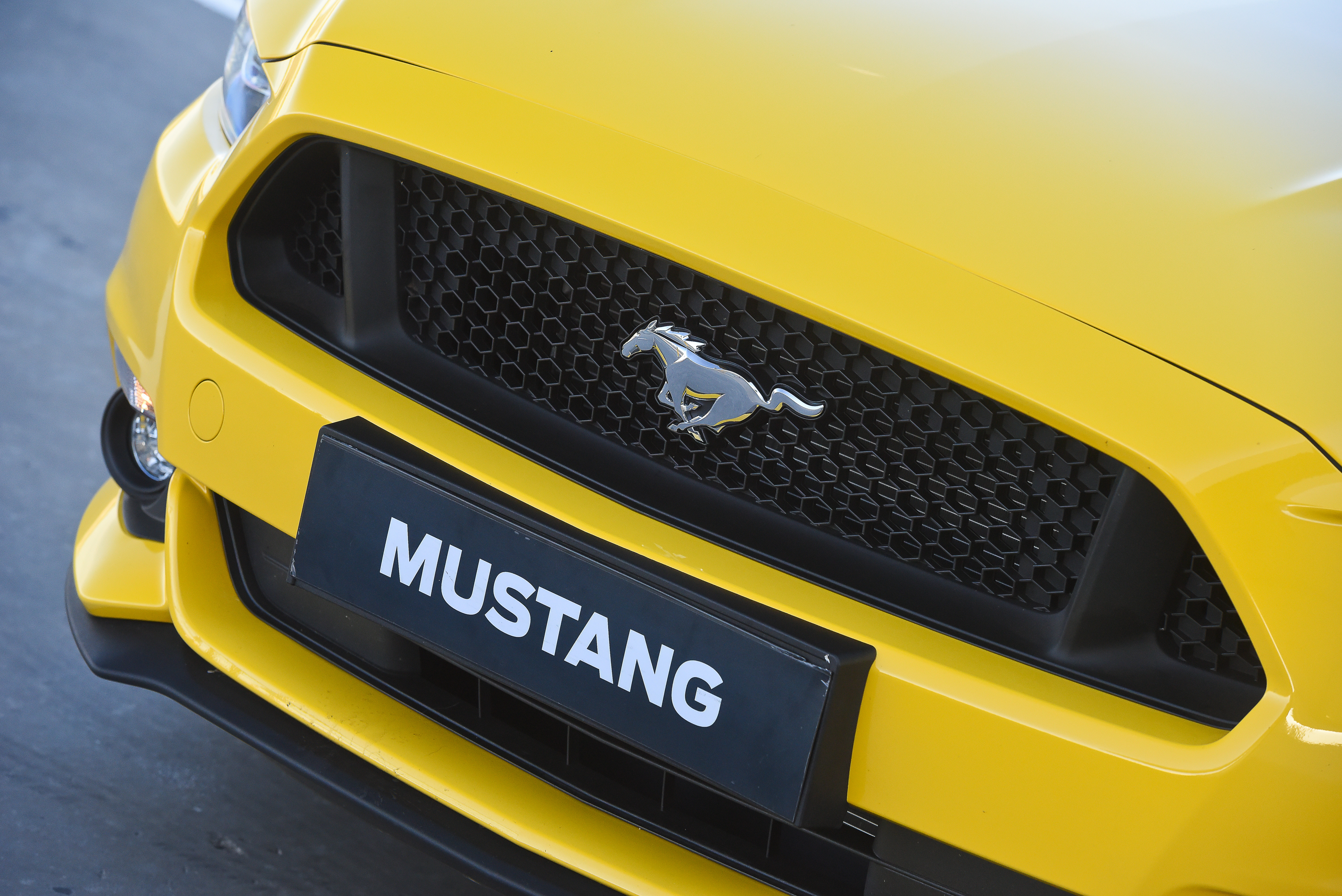 Close up, there are more subtle, but no less obvious, reminders of the Mustang’s lineage: the slanted, tri-bar taillights, the galloping pony logo on the front grille, and the GT roundel on the vast and heavy tailgate. 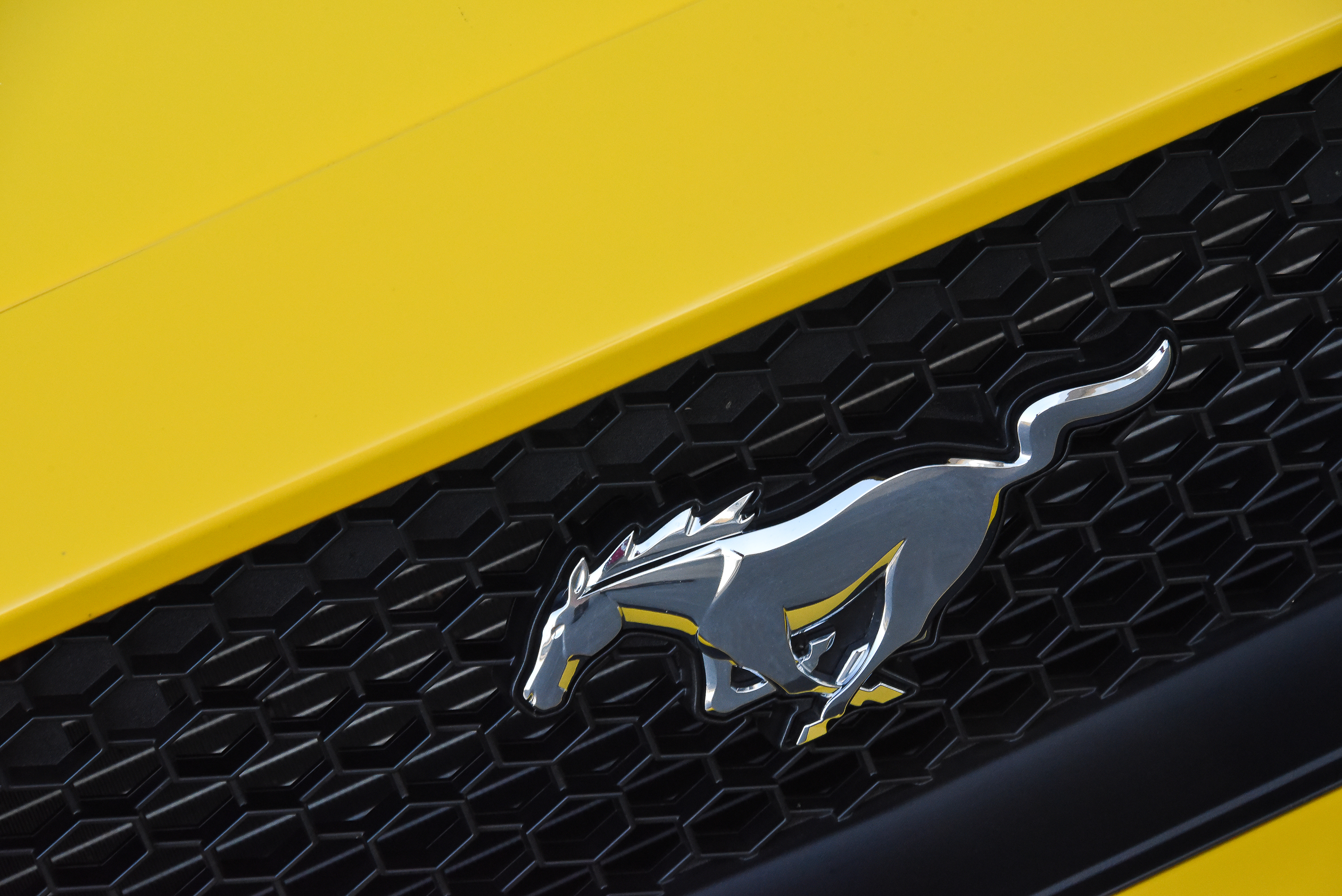 The tri-bar theme is repeated in the stern stare of the headlights, where they act as striking daytime running lights. Even more innovative is the illuminated pony logo that’s projected onto the floor when you open the doors.

My test steed is the 5.0 V8 Fastback, which comes as something of a relief. The new-gen Mustang can also be had with a hi-tech, 2.3-litre four-pot turbo engine, but for all its linear power delivery and efficiency, it just doesn’t sound or feel the part.

By comparison, the V8 is the real deal: 4,951cc of purebred American muscle, with that slightly lumpy idle and the trademark basso exhaust note. It has the muscle to match the soundtrack too: 306kW of urge and 530Nm of twist is not to be sniffed at.

The gearbox is a six-speed auto, complete with shift paddles, but for traditionalists, there’s also the option of a six-speed stick shift. Either way, the engine’s broad spread of torque makes gear selection less critical. 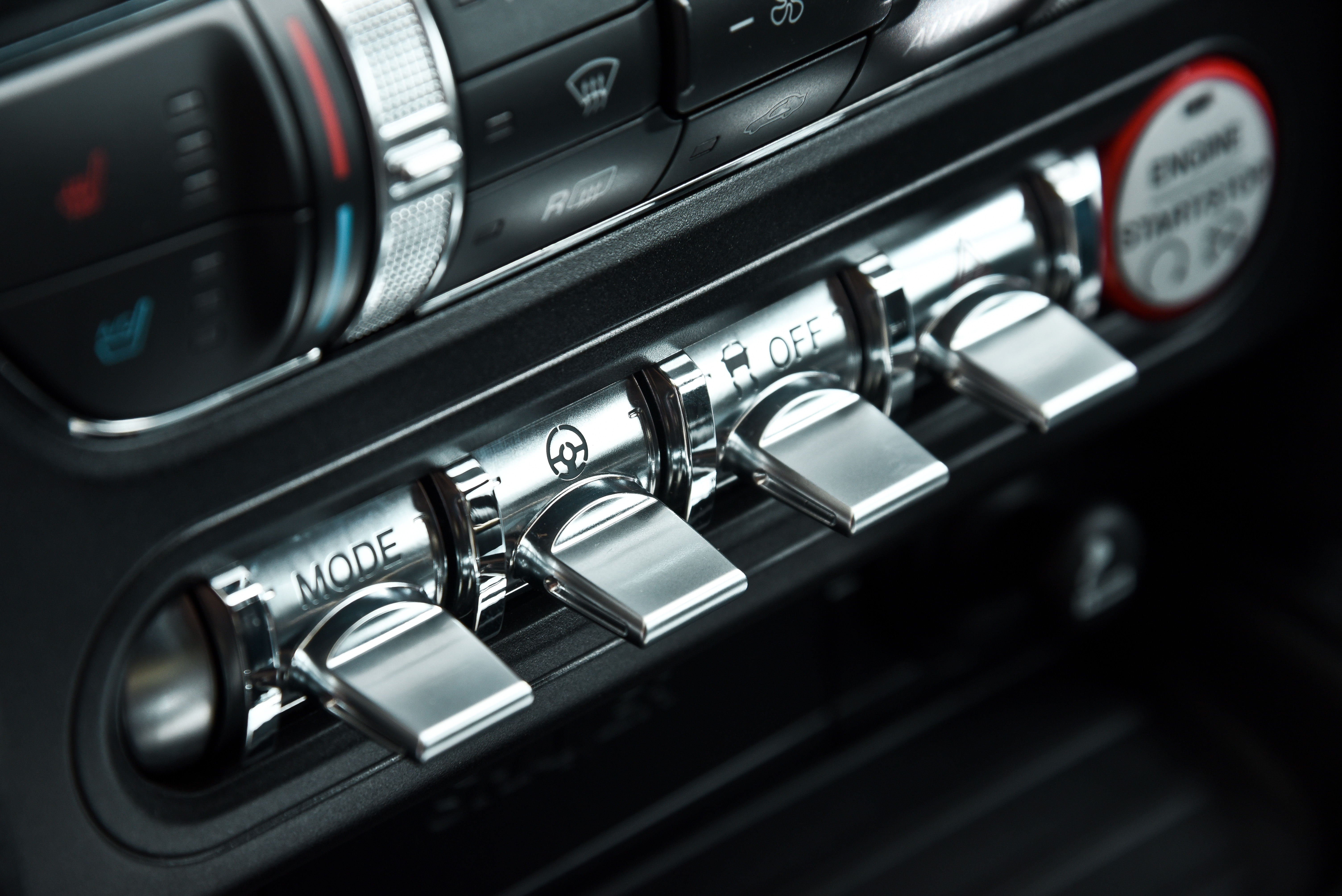 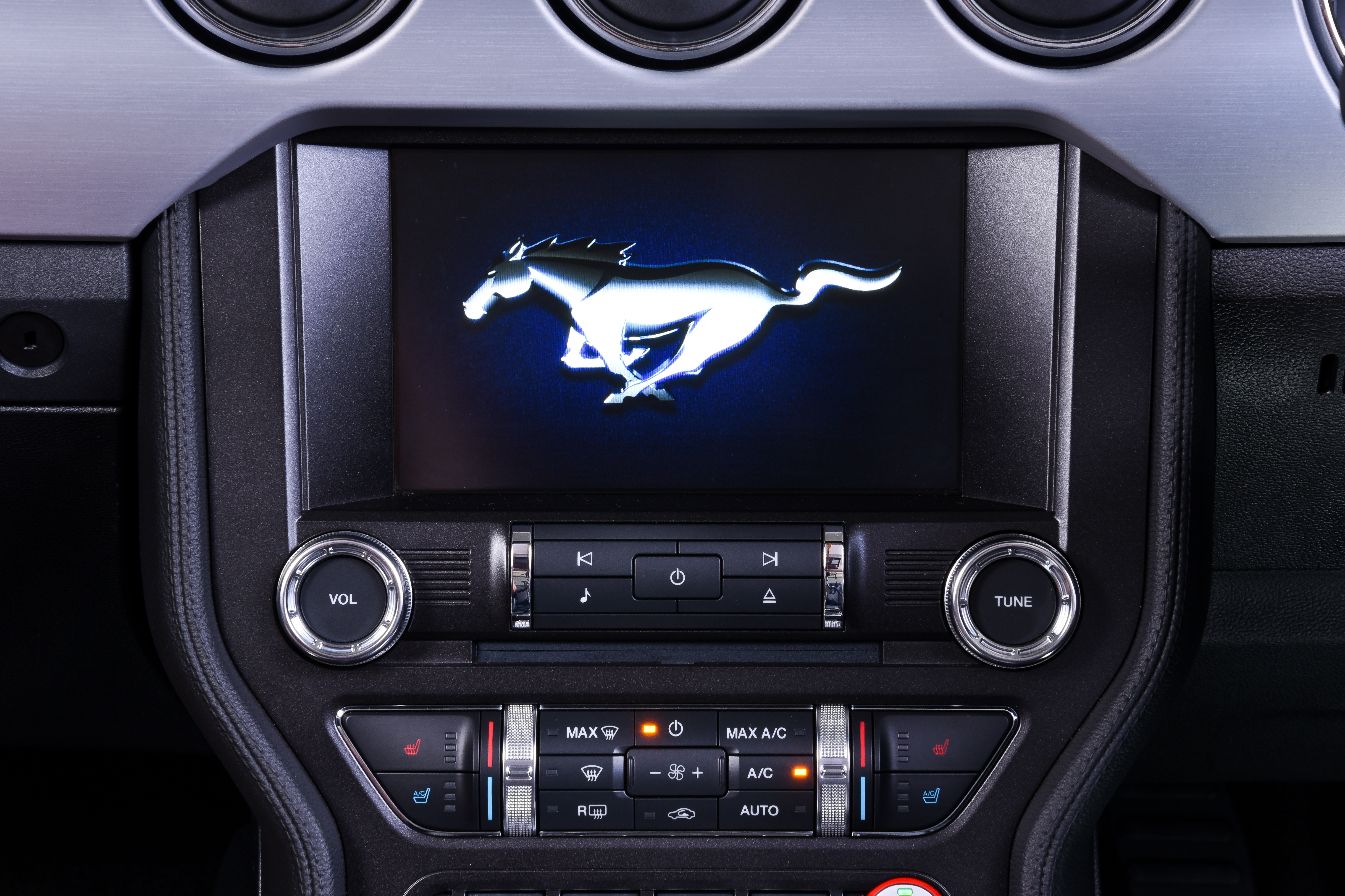 Drive is – you guessed it – to the rear wheels, and there’s a limited-slip diff to help get the power down and optimise traction, even when the Ford’s ponies are at full gallop.

The Mustang is a thoroughbred, with performance potential to match – but its biggest handicap is its kerb mass. Despite a long list of weight-saving measures, this is no lithe and lightweight steed: it’s a 1.73ton warhorse.

As it turns out, inertia is the Mustang’s prime enemy. Even with all that power, the big American never feels lithe or agile: it’s a sledgehammer of a car, using brute force to overcome Newton’s laws of gravity. 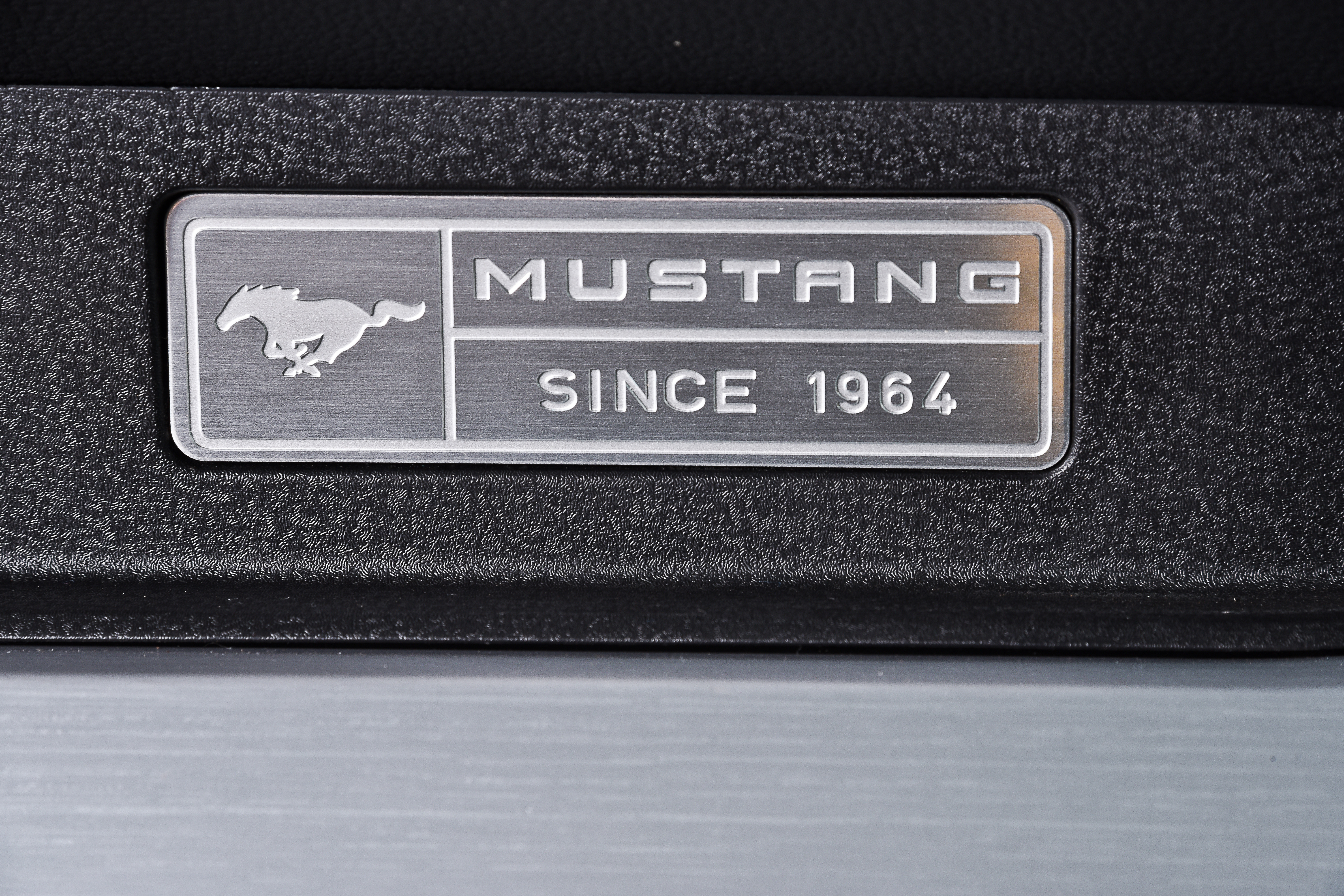 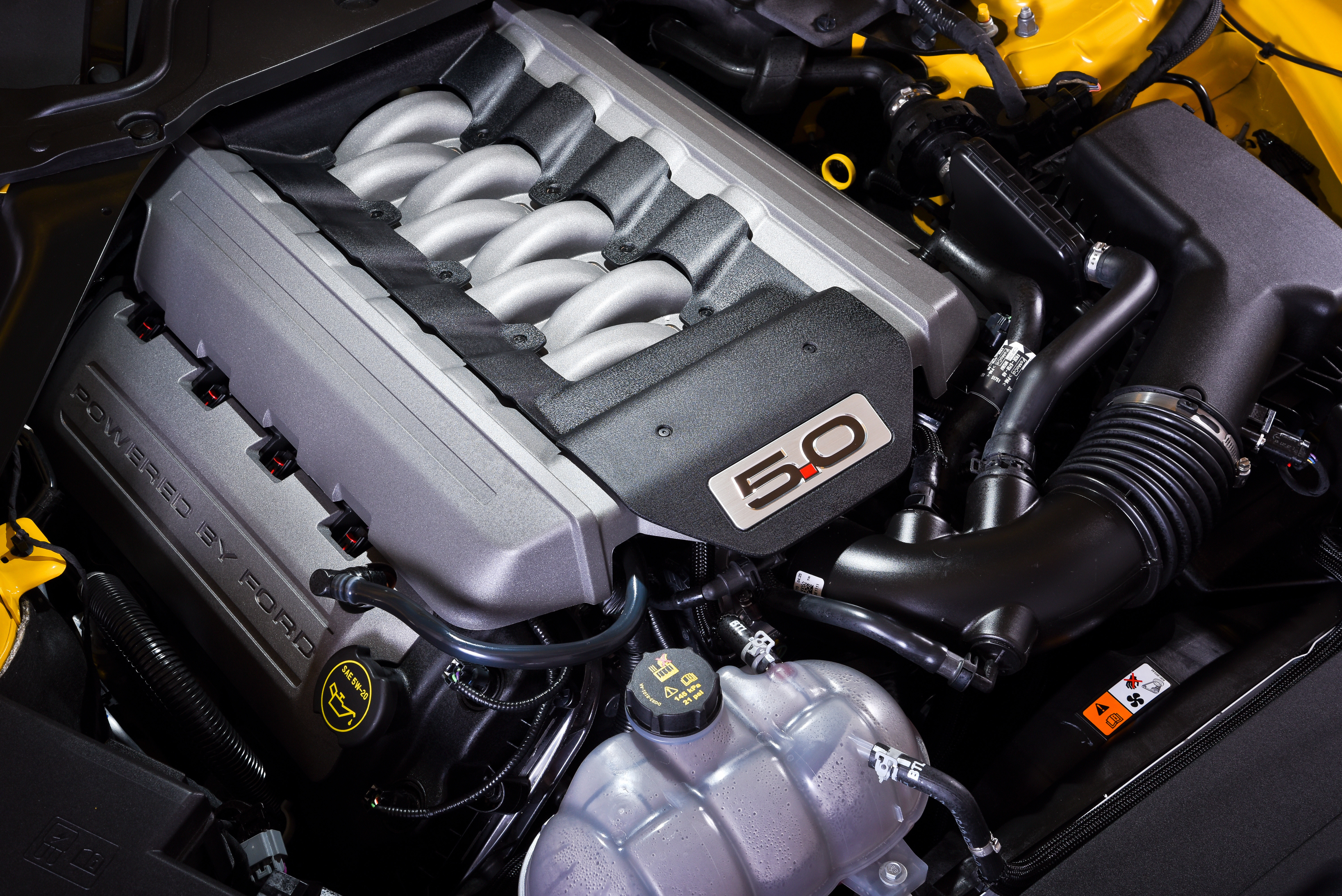 Give it a full dose of the loud pedal, and the Mustang lunges out of the box with all the energy of a race horse. The engine revs with greater freedom than those old, small-block V8s used to, and it’s happy to be chased into the red.

Ford reckons sub-5sec 0-100km/h sprints are possible, but at Reef altitudes, the reality is a few heartbeats slower: think low fives instead. Top speed is electronically governed to 263km/h – more than fast enough if you can find somewhere to use all that velocity. 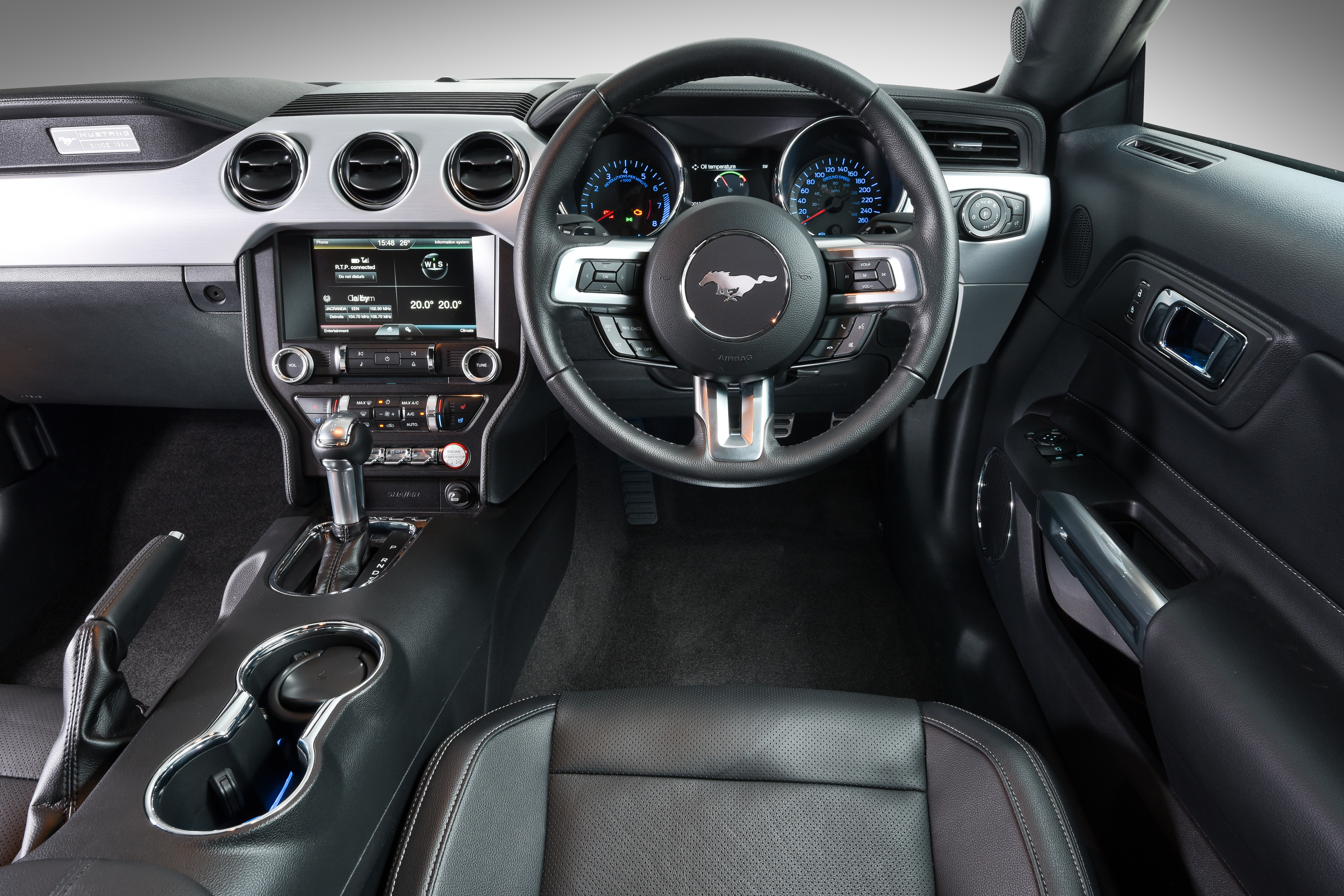 Head for some twisty mountain roads, and the Mustang’s girth and weight always count against it. You need to take it by the scruff of the neck and drive it through curves and corners with real intent.

Vital to get the most from the Mustang is to opt for Sport+ or even Track mode, using the drive mode toggles in the centre console. It allows for sharper throttle responses, brisker gear changes, crisper steering and a more lenient stability control system.

The Ford will cut and thrust its way from apex to apex readily enough, and there’s plenty of feedback from the chassis. But even in Sport+ mode, it always feels bulkier and more ponderous than a 2+2 sports car should.

The steering is meaty, but not particularly precise, and the rear will start to get lively if you get onto the throttle too early when exiting sharper corners. You can feel those rear tyres working, but the car always remains benign and controllable. 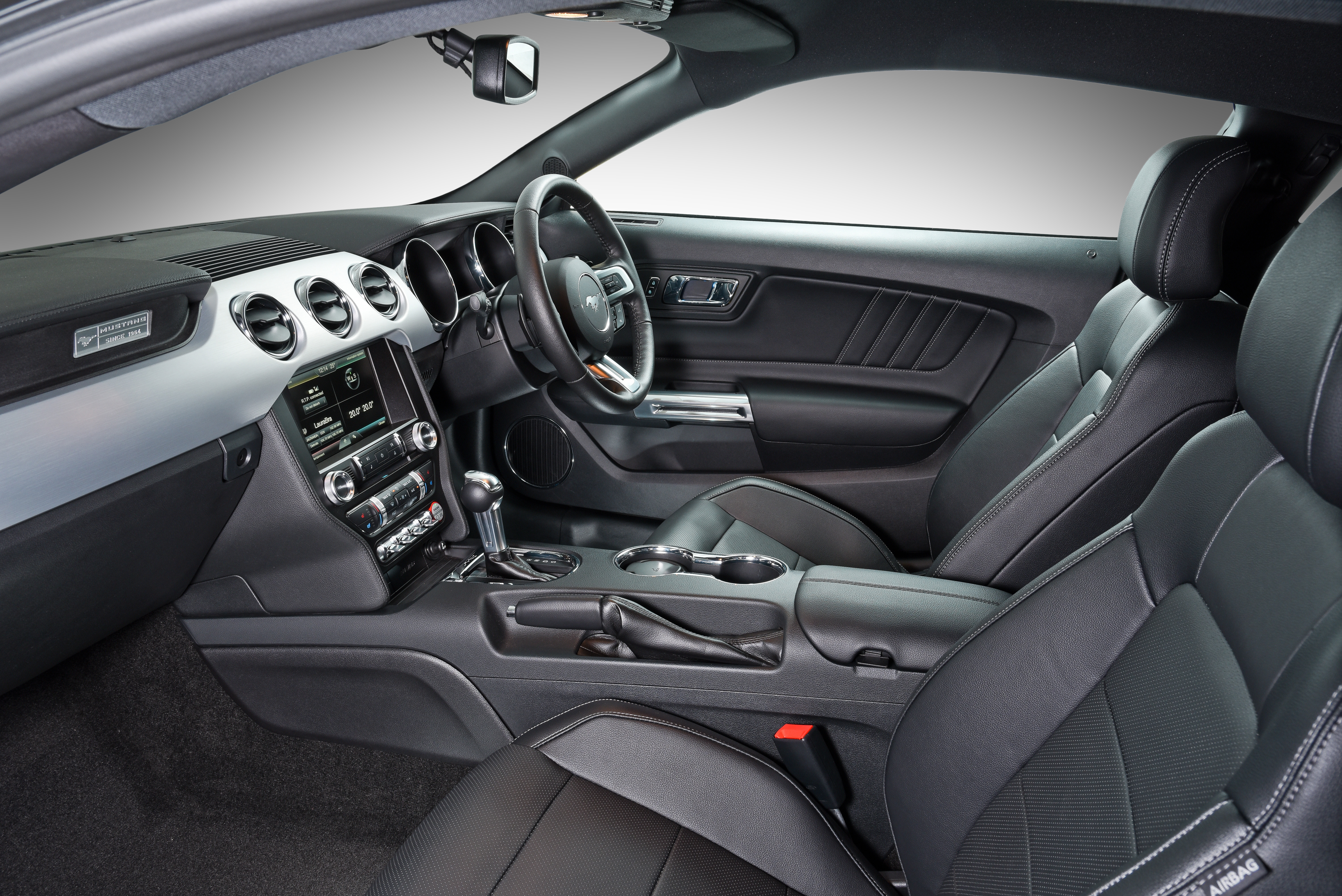 However, the Mustang does have a certain muscle car charm. There is something reassuringly robust and unpretentious about its road manners, and while it’s neither as keen nor as refined as some of its European sports car rivals, it is unmistakably Mustang.

That also goes for the interior, which is fitted with all the mod cons, but conveys a retro character often absent from modern designs. Yes, it has the obligatory touchscreen for the infotainment system, but the overall execution is gloriously analogue.

Deeply recessed dials ahead of the driver look after rev count and road speed, and the steering wheel is a thick-rimmed, alloy-spoked affair, even though it’s fitted with a full house of multifunction controls.

As I’ve said before, Ford’s Sync3 infotainment system is one of the best in the business, and one of the most intuitive, with the only rider here being that the screen in the centre stack can sometimes by rendered unreadable by reflecting sunlight. 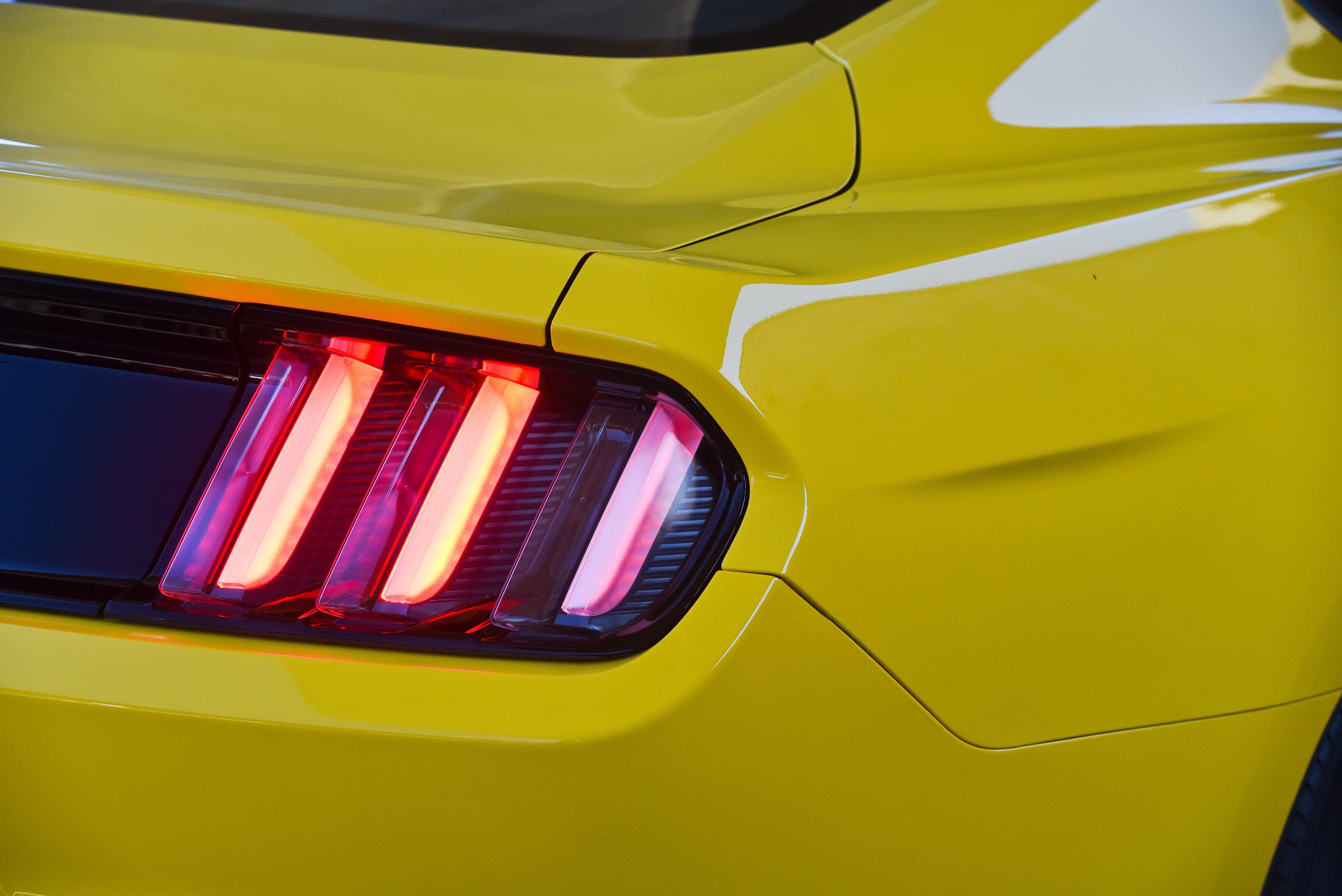 The sound is decent (although I think the V8’s soundtrack is more entertaining), while satnav, Bluetooth hands-free and audio streaming, USB playback and vehicle settings are all intuitively accessible.

Given its American heritage, the amount of brightwork comes as no surprise, but most of it is smart, brushed aluminium as opposed to glitzy chrome. Well-bolstered bucket seats trimmed in perforated leather offer electric adjustment, making it easy to find a driving position that’s right. 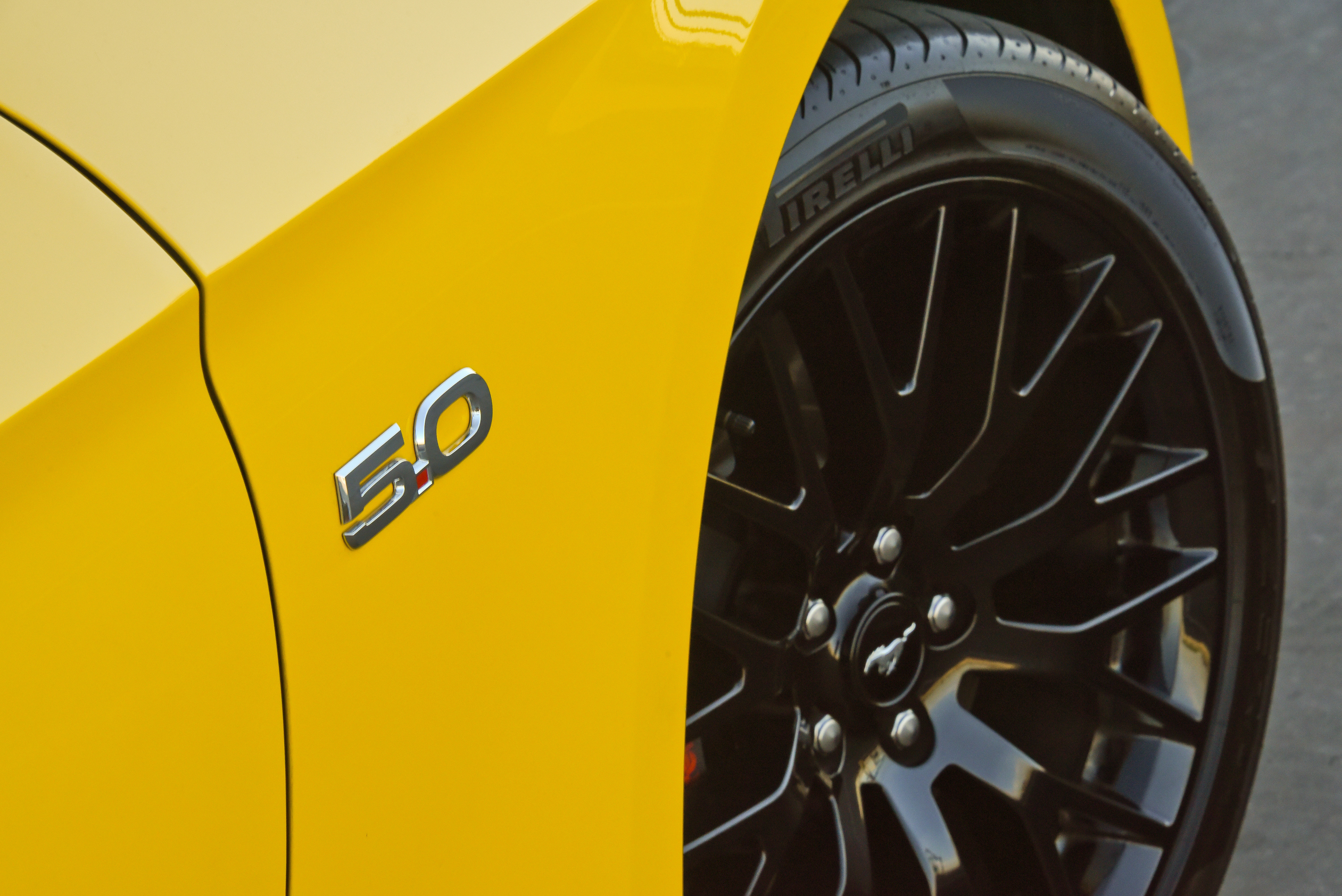 The 2+2 cabin layout means there is seating at the back, but it’s more nominal than real – good enough for kids on short trips, but not for adults or extended journeys. Besides, getting in and out requires significant effort, despite the Mustang’s large and wide-opening doors.

More practical is the luggage compartment, which offers 382 litres of space: more than enough for decent-sized weekend luggage for two. Being American, the Mustang also offers plenty of cabin stowage, including cup holders.

This sixth-generation Ford Mustang is arguably one of the best and most accessible expressions of one of motoring’s most famous nameplates. It’s also worth remembering that this is a mass-production sports car, not some low-volume, exotic machine. 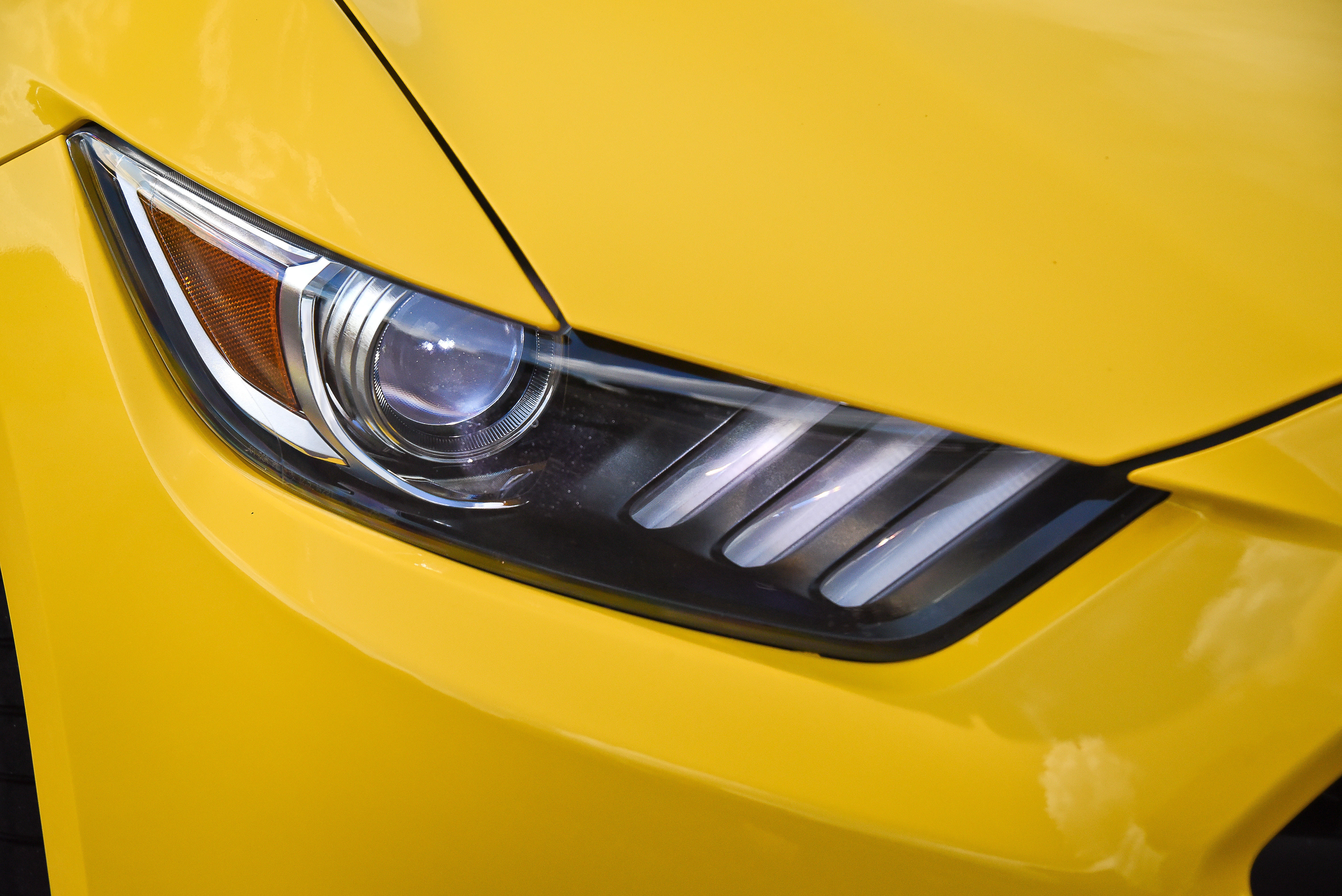 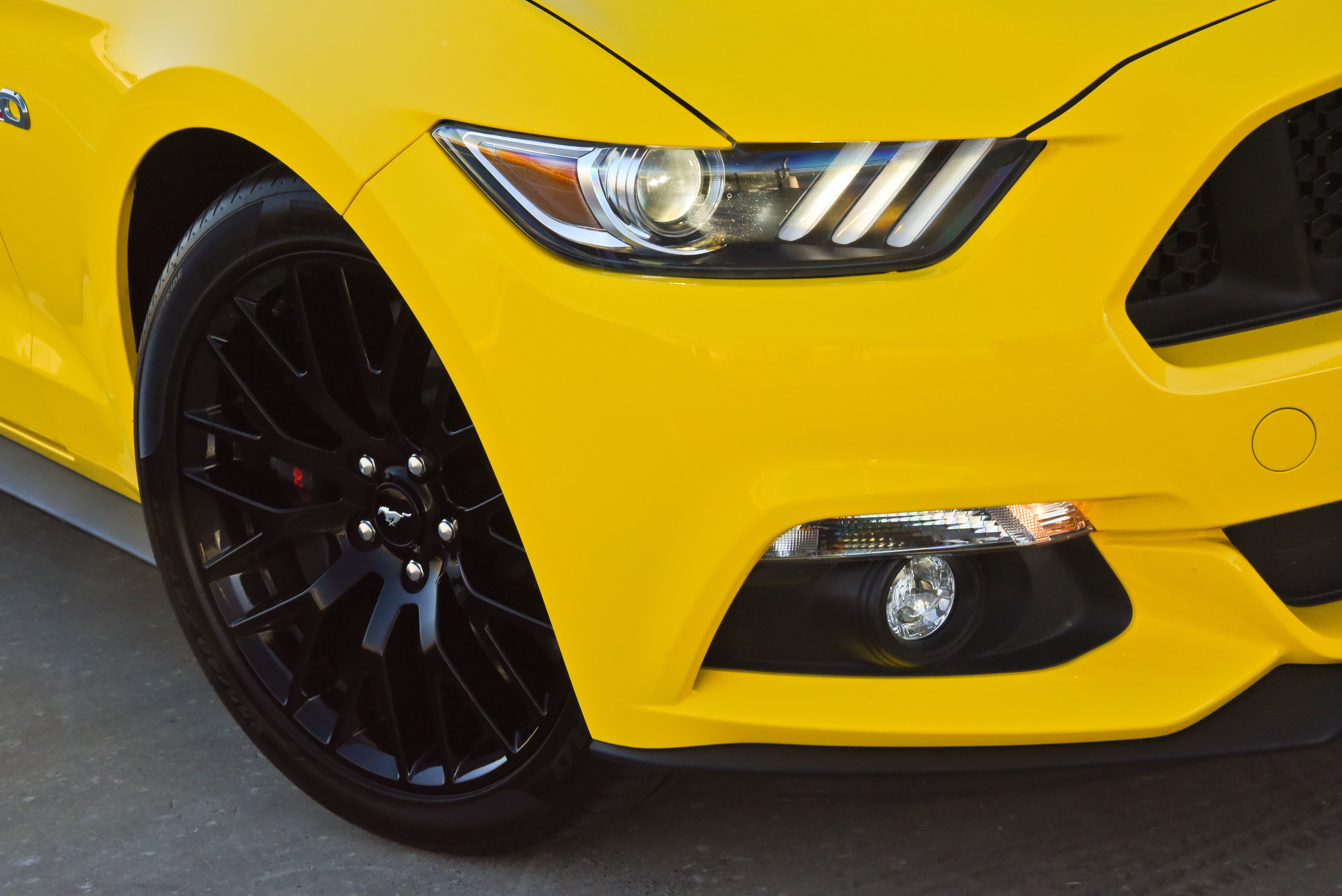 In fact, the Mustang is acknowledged as the world’s best-selling sports car, with global sales reaching 125,809 for 2017, and an overall total of more than nine million since 1964. 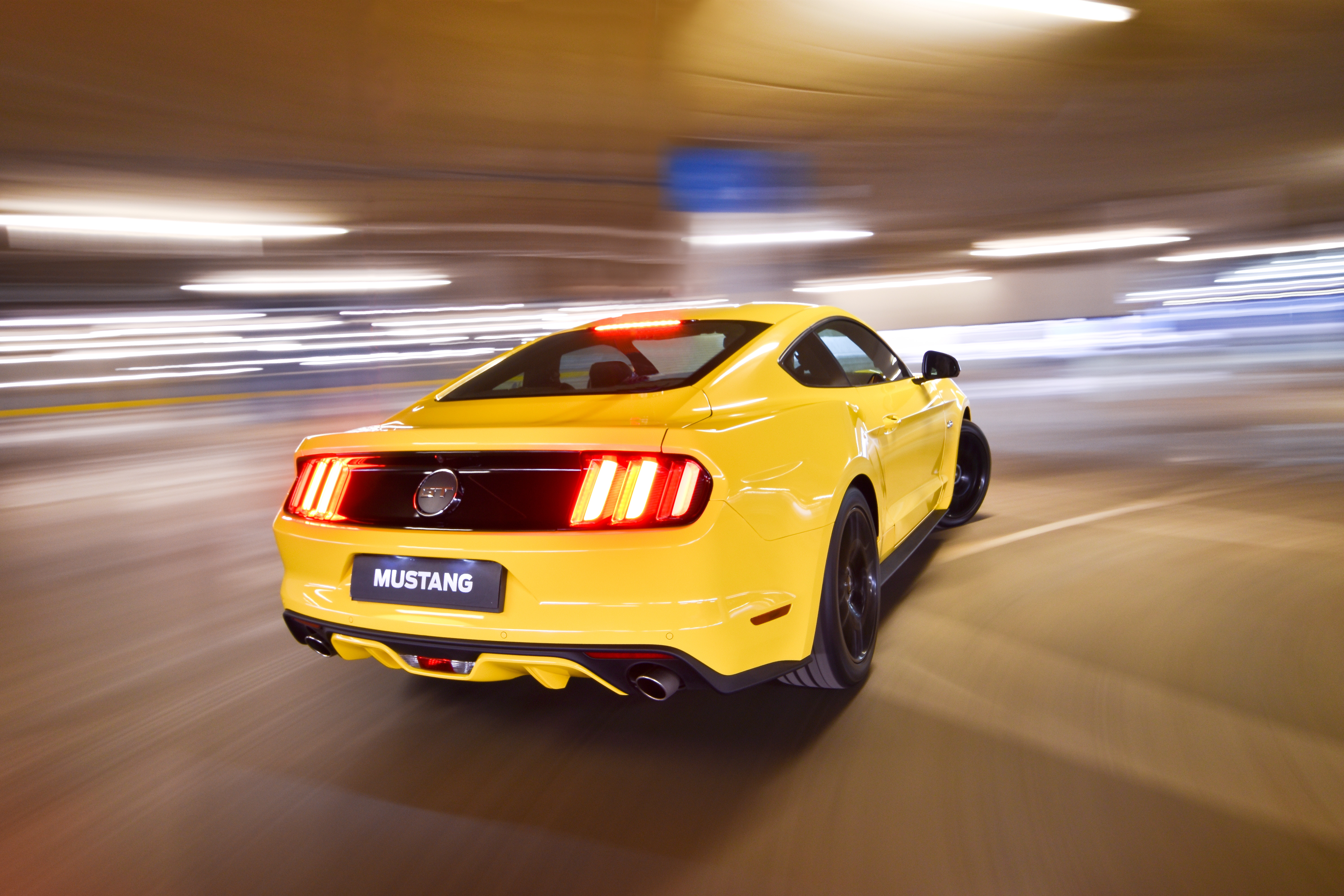 Pity then that it’s still quite expensive by South African standards. Baseline Mustangs cost around US$25k in the States, but the 5.0 Fastback V8 tested here is priced just short of R900k.

That said, you’ll spend even more for other two-door sports cars with similar power and performance. Jaguar’s F-Type P380 comes to mind, but it’s R354k dearer – and it lacks the Mustang’s heritage, charm and V8 drama. 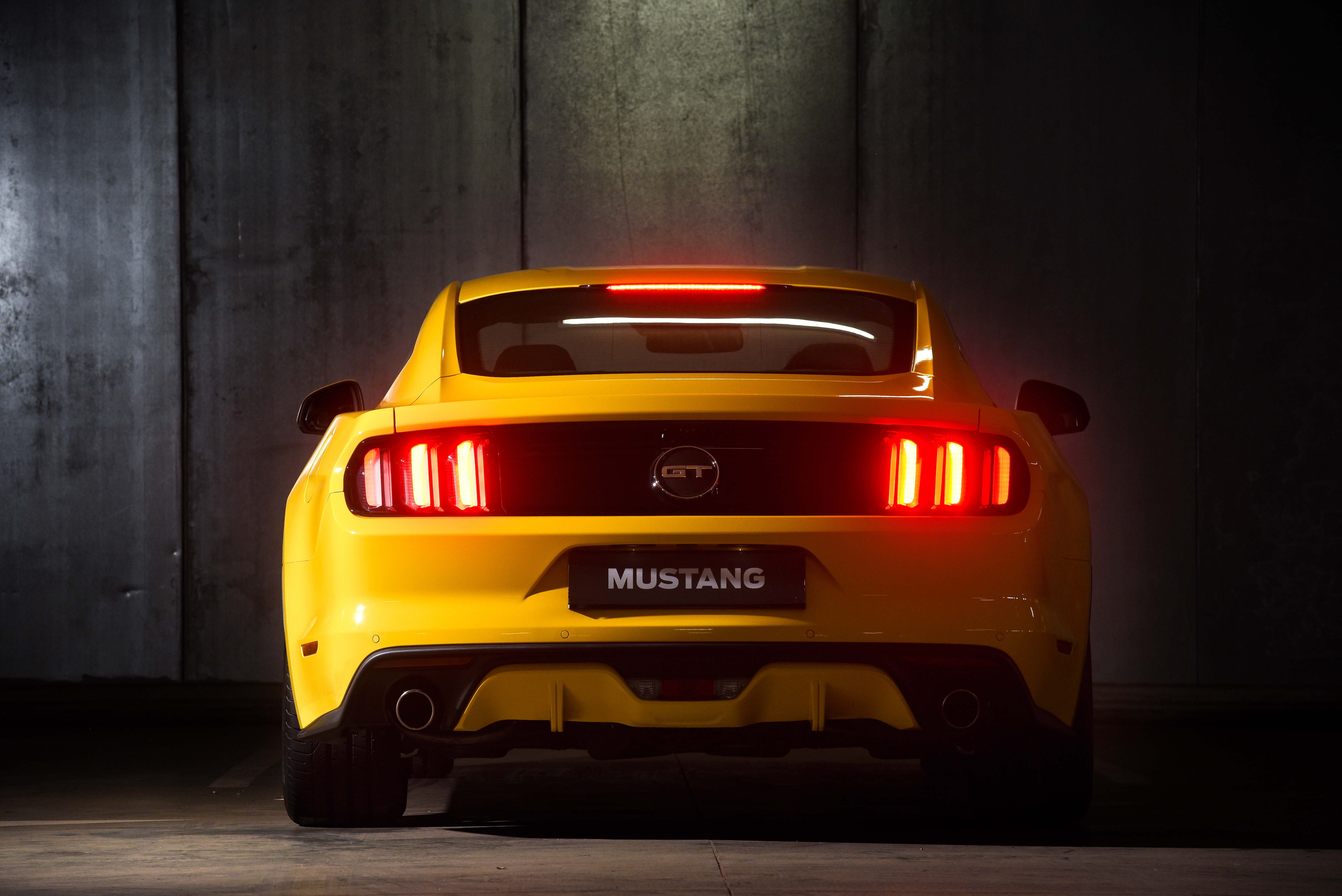 In fact, the Mustang has no direct sports car rivals. It’s an iconic American muscle machine, with all the good, and the bad, implied by that status. You’ll either love it or hate it – and in a motoring world filled with innocuous, please-everyone designs, that’s a good thing, too. DM

The best expression of the legend to date.

Too big and heavy by modern sports car standards.