The back story to the most controversial cartoon in SA history 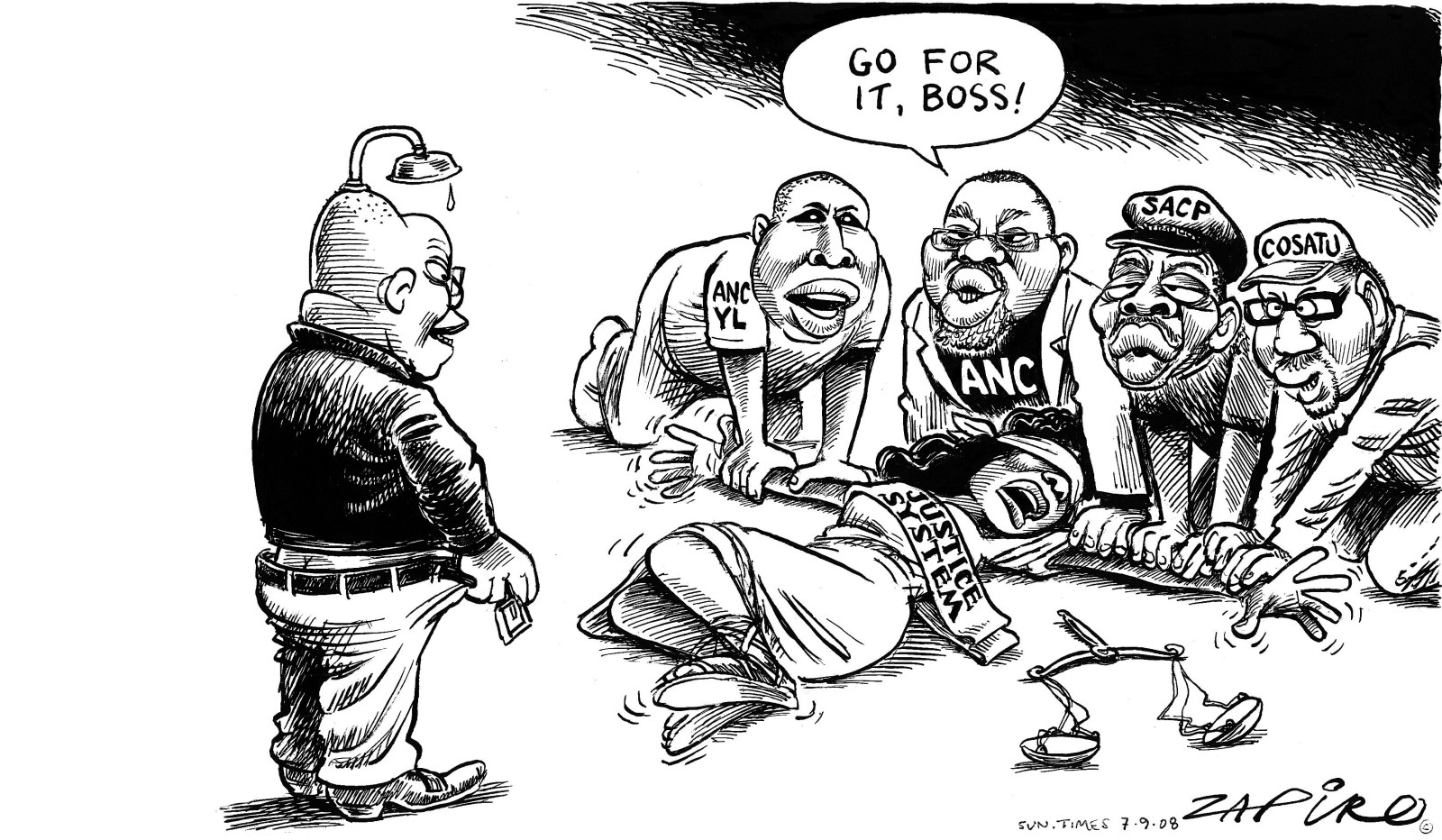 An edited extract from WTF: Capturing Zuma – A Cartoonist’s Tale, by Zapiro (with Mike Wills). Published by Jacana.

What became known as the Rape of Lady Justice cartoon appeared in the Sunday Times on 7 September 2008 ahead of Judge Nicholson pronouncing on whether the National Prosecuting Authority’s corruption case against Jacob Zuma could proceed.

Of all the cartoons I have ever done, this one provoked by far the greatest response. It was attacked, praised, debated and analysed on public platforms, on TV, on radio, in newspapers and in huge volumes on blogs and online media. The controversy surrounding the cartoon was covered in many international media, including the BBC, Al Jazeera, the New York Times and LA Times.

The cartoon was the subject of formal complaints to the Human Rights Commission and would soon draw a legal suit from Zuma. Thanks to those legal proceedings, I have a detailed record of exactly how this cartoon came about in the form of my affidavits and submissions.

Prior to the case, Zuma and his allies had threatened the judiciary alarmingly. Among other things: Julius Malema infamously said he’d kill for Zuma (if the court case went ahead); Zuma was present on the same platform when Malema said this and did nothing to deny this threat when it was his turn to speak; Zwelinzima Vavi had echoed Malema in saying he too would kill for Zuma (and for the same reason); Gwede Mantashe called Constitutional Court judges counter-revolutionaries and said there’d be anarchy if the court case went ahead; SACP general secretary Blade Nzimande stated that if Zuma was required to stand trial it would take the country to the brink.

The initial draft of the cartoon was prepared on 4 September 2008, the day Cosatu announced a two-day national strike if Judge Nicholson ruled against Zuma. I viewed that as a further attempt to bully the court.

The process I usually follow when preparing a cartoon is this: I write down various subjects, then I write down my attitudes towards those subjects, and then I link the subjects and attitudes with arrows and create a mind map before, lastly, considering the best method to visually portray what I have put down in words. In my view, Zuma and his supporters were determinedly and systematically undermining the entire legal system until charges against him were dropped or the courts ruled in his favour. But how to portray that? When brainstorming the idea, I wrote down the words Zuma was “raping the justice system”. It suddenly occurred to me that the metaphorical figure of justice was a woman and that all the main role players were male.

The first rough drawing came to me in one swift concept, unlike the way my ideas usually develop. Part of what I wanted to depict in the cartoon was that Zuma wasn’t doing much of the talking himself. His supporters were making most of the damaging statements concerning the judiciary and effectively egging him on. So, even though he was the prime rapist of the system, the others were facilitating the attack in a manner similar to a gang rape.

The reason why Mantashe is the one speaking is that he represents the ANC, which I saw as the other prime assailant of the justice system. Zuma’s own trial for rape – at which he was found not guilty – was genuinely an afterthought and it was background and not foreground to the cartoon.

I immediately knew it was a strong idea. But was it too strong? I did a clearer rough draft and faxed it to Mondli Makhanya, who was editor of the Sunday Times. He was at a restaurant. He phoned me back immediately to say, “Yoh! Yoh! Yoh! I told the waiter, who was as black as me, to expect a fax and I saw him pick it up and, as he looked at the cartoon, I swear he turned white.”

Mondli, a fearless editor, was prepared to run the cartoon but I was worried, not about what everyone in the drawing might think (although I had some sympathy for Vavi), but because of how women might view it. I tested the cartoon on two female colleagues who were experienced journalists. They were taken aback but felt it was right. So we went with it.

The response was extraordinary. My friend and fellow cartoonist Andy Mason penned an article titled A Sharp Intake of Breath, which he said was his, and everybody else’s, response to the cartoon when they first saw it.

Debate raged about the cartoon’s validity. Every person portrayed in it (except Lady Justice!) attacked it directly but the most worrying criticism for me came from some who said the cartoon fed a prevalent South African stereotype or trope of the black male as a sexual predator. I don’t believe that was the case at all. I’m extremely conscious of the racial power imbalance in this country — of white people setting agendas and defining constructs for identity. I think about this a lot. But this drawing is clearly a metaphor and the concept of “the rape of an institution” is entrenched in language and included in dictionaries.

The cartoon entirely reflects Zuma’s own behaviour as a powerful politician whose portrayal is defined by his actions and not by his race. And the cartoon is deliberately not graphic in its portrayal — it suggests an event without explicitly portraying it. I later discovered instances from other cartoonists around the world who had used a similar theme and sometimes in a far more graphic way. One thing I remember clearly is that some rape survivors, and even gang rape survivors, from across the racial spectrum, expressed their support for the cartoon.

Judge Nicholson (eventually) ruled that the procedures followed by the NPA were so faulty that the charges, as they were then constituted, had to be dropped and he stated that claims of “political undercurrents” in the process were “not completely unbelievable”.

Zuma and his allies appeared triumphantly on a platform near the Pietermaritzburg High Court and attacked me in various ways. Senior ANC figure Baleka Mbete deliberately and dangerously misrepresented the cartoon, saying to the angry crowd of thousands:

“The woman in the cartoon is white. Is Zapiro saying that Zuma will rape white women?” In the drawing Lady Justice clearly has an African appearance, something I have tested on many audiences and readers. (Since 1996, I had been drawing her as a black woman to represent justice in the new South Africa.) Zuma repeated the racial calumny when I later confronted him on radio. He questioned why Lady Justice was white.

The Cartoonists Rights Network International rallied the global cartooning community to demonstrate their solidarity and gave me their annual Award for Courage in Editorial Cartooning at an event in Washington where I found myself sharing a platform with Flemming Rose, the man responsible for publishing the Prophet Muhammad cartoons in the Danish newspaper Jyllands-Posten in 2005.

The CRNI reported that they had not come across another democracy where cartoons had played a bigger role in the national discourse than South Africa during the previous decade.

In May 2013, I was stunned to find the Rape of Justice cartoon had been included in a prestigious collection on BuzzFeed of “Fifteen Historic Cartoons That Changed the World” compiled by Victor Navasky, former editor of The Nation and the author of The Art of Controversy: Political Cartoons and Their Enduring Power. My effort squeaked in at number 15!

I’m well aware that there’s huge hyperbole in that headline. I would never claim that my cartoon changed the world. But it was an incredible feeling to be listed among some of the great cartoons of the past 200 years including work from heroes of mine like Daumier, David Low, David Levine and Art Spiegelman (who mentored me when I studied in New York in 1989).

The Human Rights Commission would rule in June 2010 that the cartoon was “political expression published in the public interest and deserved heightened protection”. They said the cartoon was not incitement or hate speech and did not infringe the right to dignity of women or rape victims. The finding did have an odd rider, however. Having exonerated me in their ruling, the commissioners added that they found the cartoon and the words to be “probably distasteful and offensive”, which was a curiously subjective expression from an official body.

I remain convinced that the cartoon was entirely justifiable. DM