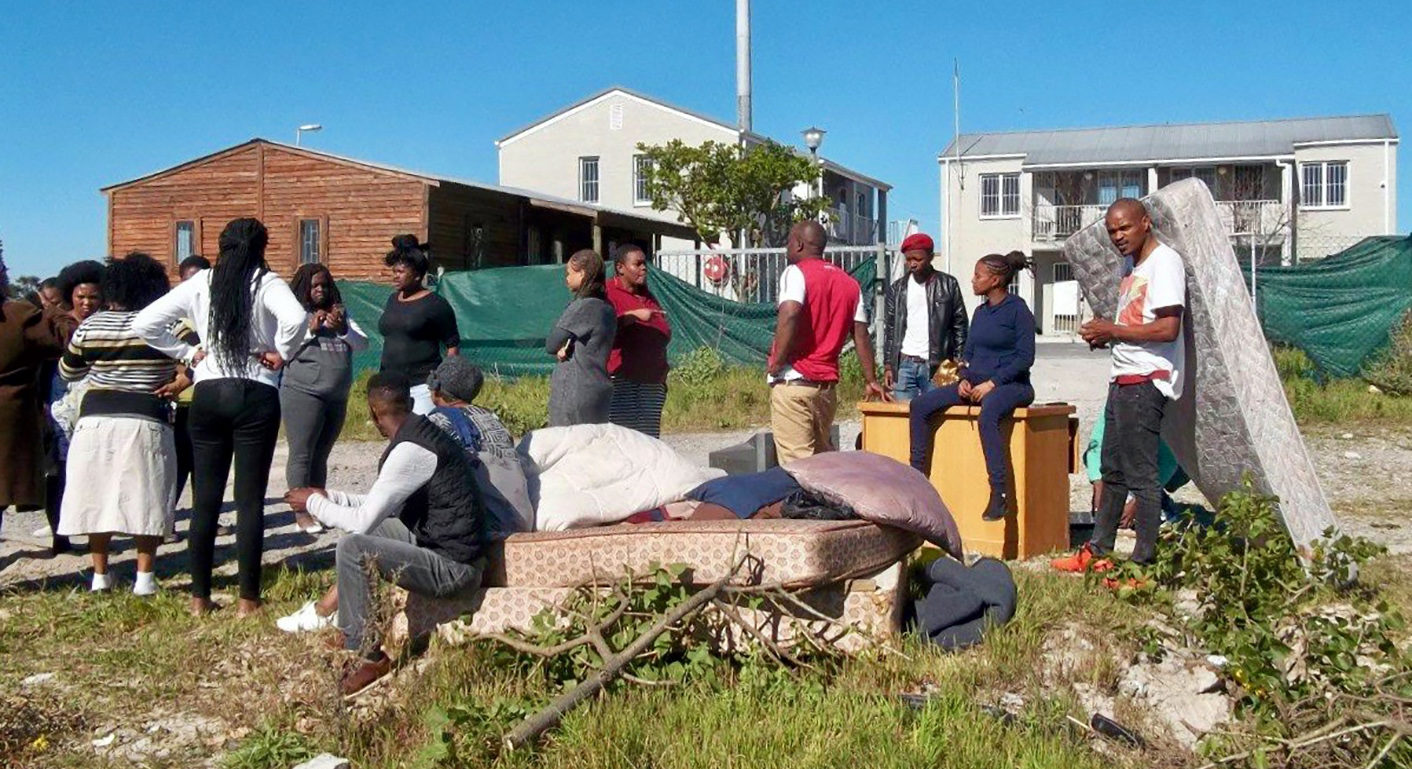 Evicted residents from a block of flats and bungalows in Khayelitsha owned by Old Mutual reoccupy the building. Photo: Vincent Lali

Residents were removed from their Khayelitsha homes, but returned almost immediately.

Twenty-five people who occupied and were later evicted from an Old Mutual property have reoccupied the building. The occupiers have had most of their seized possessions returned, but claim that some of their goods are damaged or missing.

A leader of the Thembokhwezi, Khayelitsha, group said they collected their seized possessions from a depot in Blackheath on Friday.

They illegally occupied the property on 16 June and were evicted on 30 July by Red Ants and police. Most occupants were backyard dwellers in the area. The property has been vacant since Equal Education vacated its offices there in 2016. The insurance giant intends to build “289 units and amenities such as a crèche or church, a school and a public open space” on the property, said spokesperson Jenna Wilson.

Neli Bomvana, a leader of the occupiers, said a fridge belonging to one occupier is broken. Another occupier could not find a confiscated digital camera and another lost shoes.

The property, dubbed Azania Square by the occupiers — but as yet unnamed by Old Mutual — has several buildings that are planned to form part of the Old Mutual project.

Wilson said Old Mutual had consultations with community leaders and the City of Cape Town. A layout for the development has been completed and approved.

“The development proposal accommodates the community’s requests for a commercial centre and the city’s requirement for a housing development,” she said.

Asanda, an occupier who did not want to be fully identified, said that during the eviction a police officer grabbed her by the neck and shoved her to the ground. There was a scuffle and she said the policeman said “he would kick me until I shit”. Asanda said her left eye and her thigh were painful from the incident.

Asanda opened a case of assault against the police at Khayelitsha police station. This was confirmed by station commander Brigadier Mkuseli Nkwitshi.

Western Cape police spokesperson Captain FC van Wyk said the role of the police was to safeguard the sheriff during the execution of a court order.

“While we believe in the right of all South Africans to have the security of a roof over their heads, Old Mutual is committed to protecting the rights and properties of the local community of Thembokhwezi, and ultimately, to deliver on our obligation of developing the site for use by this community,” said Wilson.

“We are going to break down doors and move back into Azania Square,” said Asanda when GroundUp spoke to her after the eviction.

Sibulelo Mkhontwana said his food, TV, clothes, and money were seized. “I was about to buy groceries with the money. Now I will starve,” he said. Mkhontwana claims the Red Ants broke the door of his room and confiscated all his belongings.

“I said leave my clothes alone, but they ignored me. Now I have no clothes other than the ones I’m wearing.”

Mkhontwana said he makes a living from cutting grass, cleaning yards and fixing damaged stoves for residents of Bhongweni. He vowed to occupy the flats again when GroundUp spoke to him after the eviction.

“Because I have nowhere else to stay, I will sleep here tonight,” Mkhontwana said.

The occupiers did return. Member of the Ward Development Forum Nolubabalo Mtshalala said they moved back after sunset on the day the evictions took place.

“Not a single one has given up and left. We are not cowards,” she said. 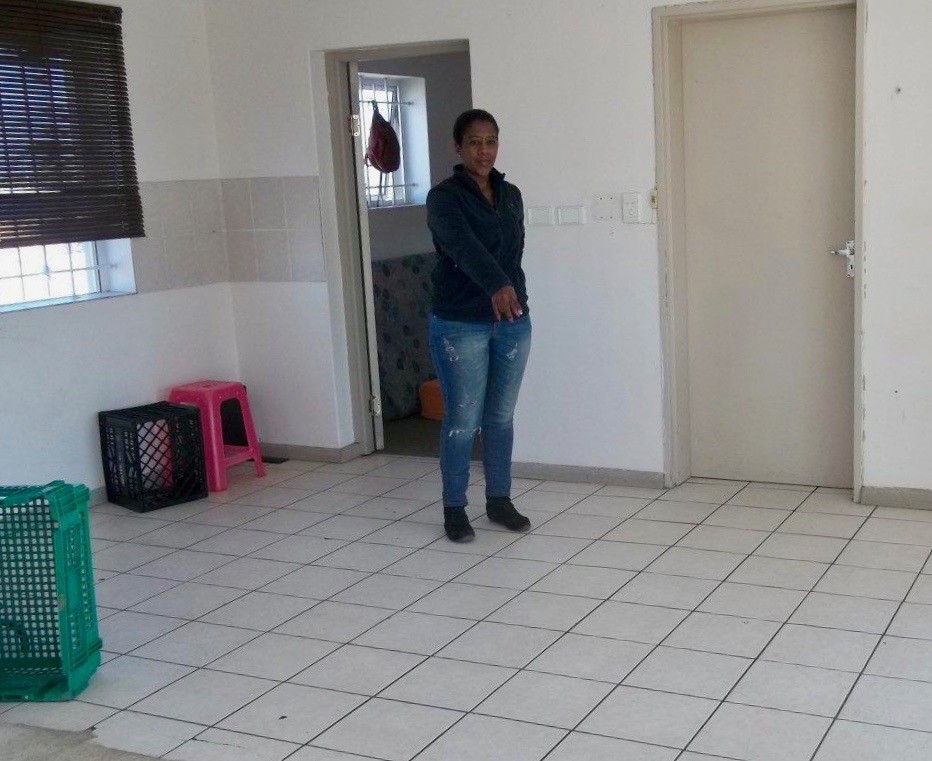 Neli Bomvana shows the floor where occupiers have been sleeping. Photo: Vincent Lali

Mtshalala said she and Bomvana came to stay in solidarity with the occupiers.

“We as community leaders have made a decision to stay with the occupants of the flats, support them and ensure we deal with anyone who victimises them,” she said.

Mtshalala said more residents are set to occupy the premises. When GroundUp visited the flats on Thursday, she and Bomvana were chatting outside.

“Some occupants of the flats have gone home and others have gone to work. We take turns to guard the flats,” said Bomvana. She said at night the occupiers share the few beds that remain, while others sleep on the floor.

“We put money together to buy food and divide it among ourselves. We eat take-away food because we have no groceries,” said Bomvana.

Wilson said the occupants will again be interdicted.

“The interdict is open-ended and focuses on the occupation of existing structures (such as the flats) on the land as well as the erection of structures on the land.” DM