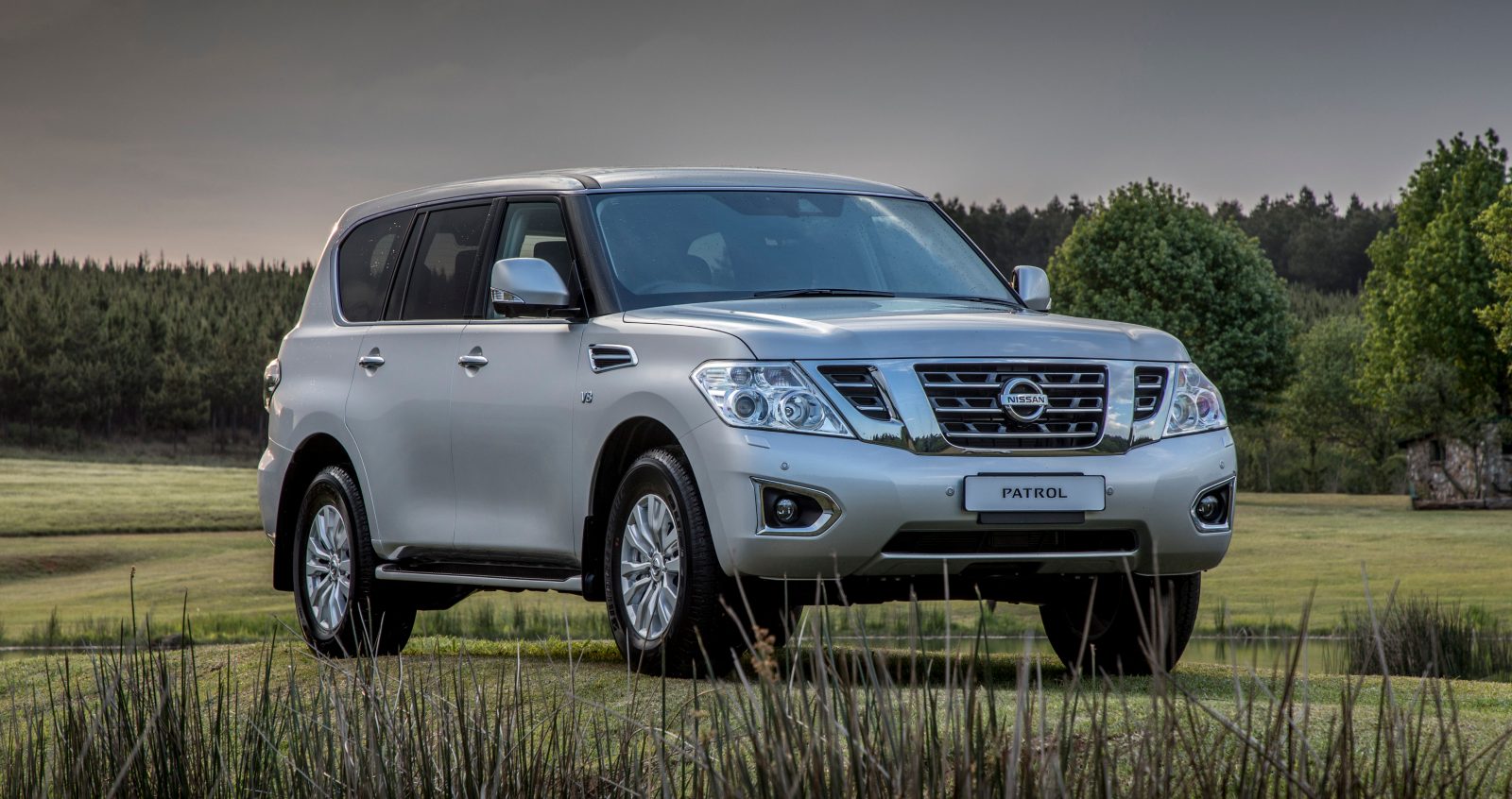 The Nissan Patrol isn’t just big: it’s gargantuan. And it has an equally enormous V8 engine to match. It’s also a dyed-in-the-wool off-roader, with low-range and all the right all-terrain bits. But how relevant is it in a motoring world focused on efficiency?

If you’re an SUV buyer with around 1.4-million hard-earned rand burning your pocket, would you opt for the Nissan Patrol LE Premium? Well, that depends.

For that kind of money, SUV buyers really fall into two main camps: the real off-road enthusiasts, and the luxury softroader fans. Oh yes, and there’s the performance-biased fringe, too. 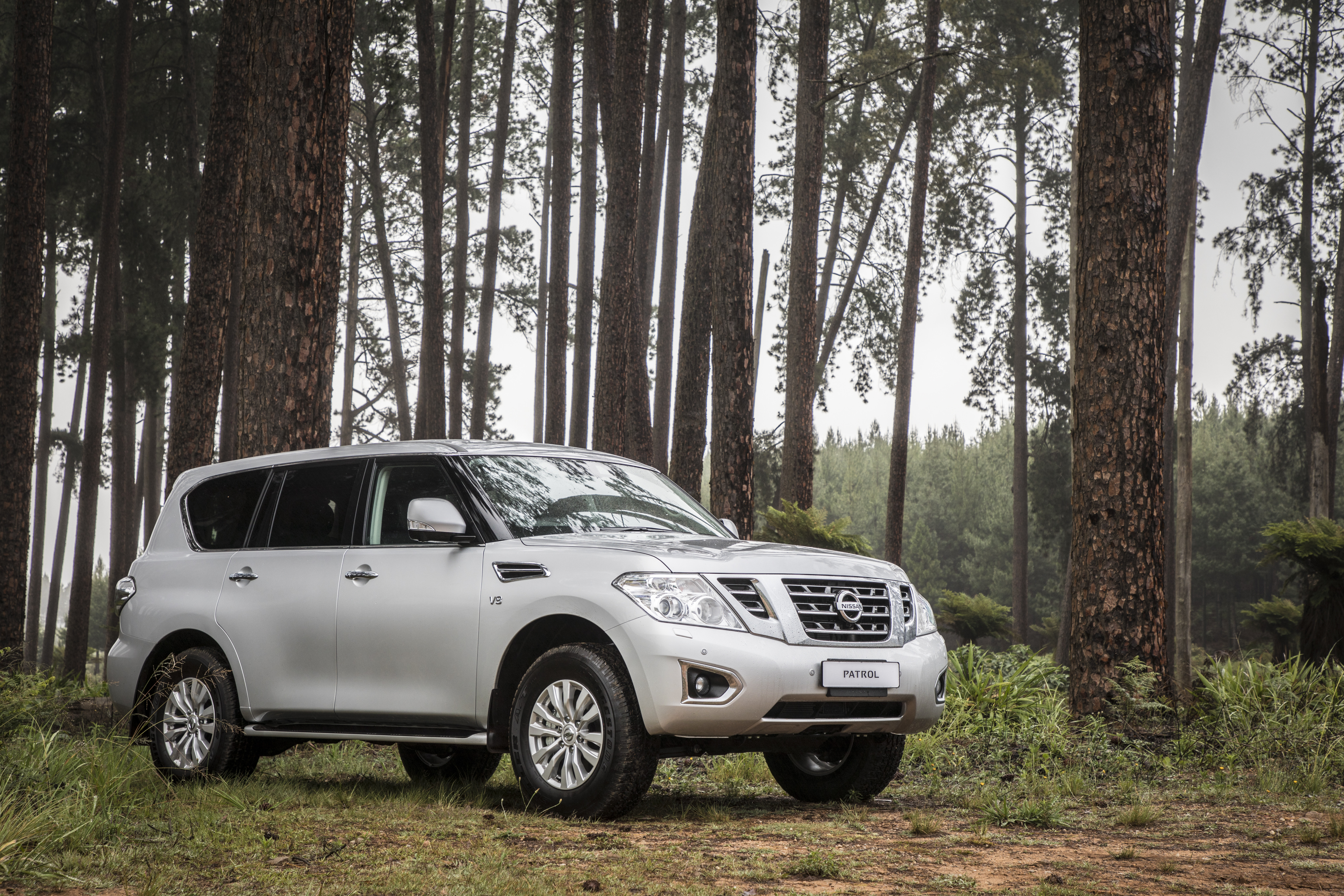 If off-roading is the main requirement, the list of contenders would have to include the Land Rover Discovery, Toyota’s Land Cruiser 200, and the subject of this test, the Nissan Patrol.

Those leaning more towards the luxury, comfort and performance SUV formula will want to cast their net in a more crowded pond, populated by the likes of the Porsche Cayenne, BMW X5, Mercedes-Benz GLE, Audi Q7, and Range Rover Velar.

Prioritising performance in the SUV context? Then the Jeep Grand Cherokee SRT, Porsche Macan GTS and the Range Rover Sport spring to mind. 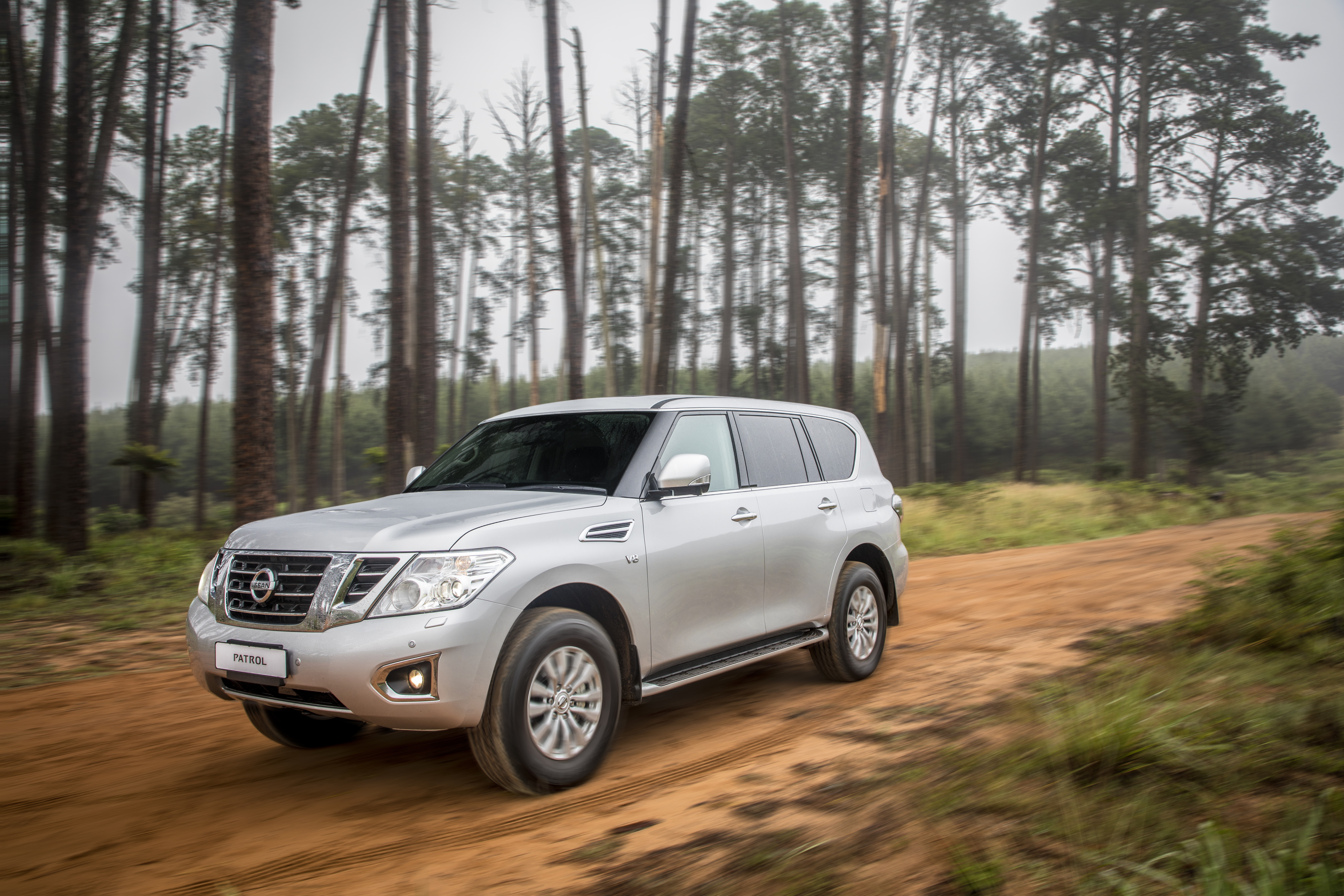 Of course, those divisions aren’t quite as cut and dried. The Patrol, as we’ll see, doesn’t skimp on luxuries. And Range Rover Sport models with low range can tackle the rough stuff quite competently.

But let’s face it: Land Cruiser, Patrol and Discovery owners are the most likely to head for the untamed hinterland, and will have chosen their steeds accordingly.

To some extent, the Nissan Patrol is an anachronism. While the modern SUV trend increasingly favours smaller-engined efficiency, advanced weight-saving materials, intelligent electronics, and even hybrid and electrically assisted drivetrains, the big Nissan has its boots resolutely stuck in the honest muck of gung-ho off-roading. 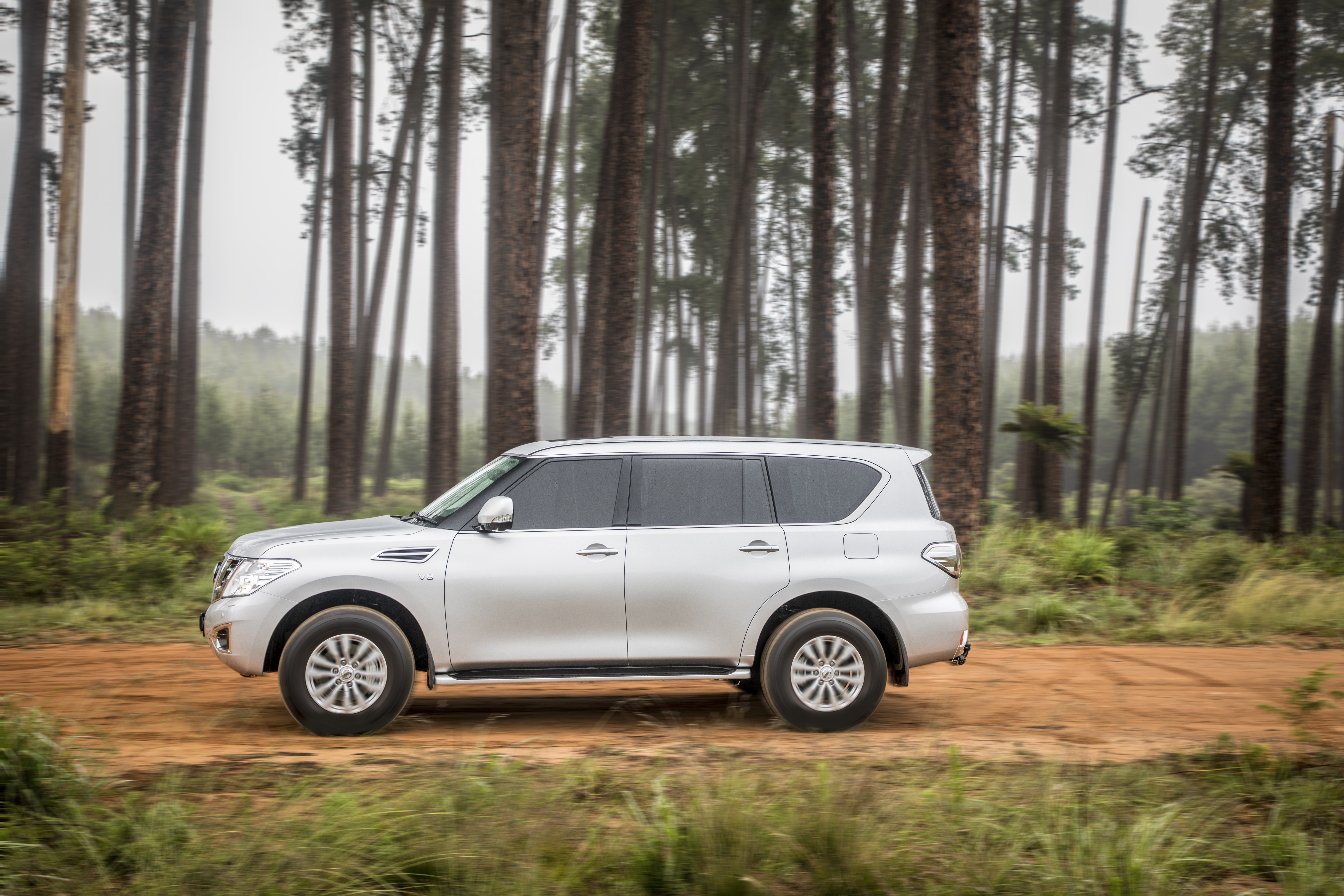 For starters, it’s a juggernaut of a vehicle – almost overwhelmingly so, due to the sheer size of the beast. At 5.17m long, 1.94m tall and just a few millimetres short of 2m wide, there’s nothing unobtrusive about the Patrol.

That it’s chunky and angular in the best old-school SUV tradition only adds to its bulky, brutal appearance. No wonder the Patrol tips the scales at a hefty 2,746kg. Forget about treading lightly in this monster …

The front is home to acres of brightwork, much of it accounted for by the huge, chromed grille. There are also chromed bezels for the fog lamps, a brushed alloy scuff plate that actually looks more functional than fancy, and large multi-element xenon headlight clusters. 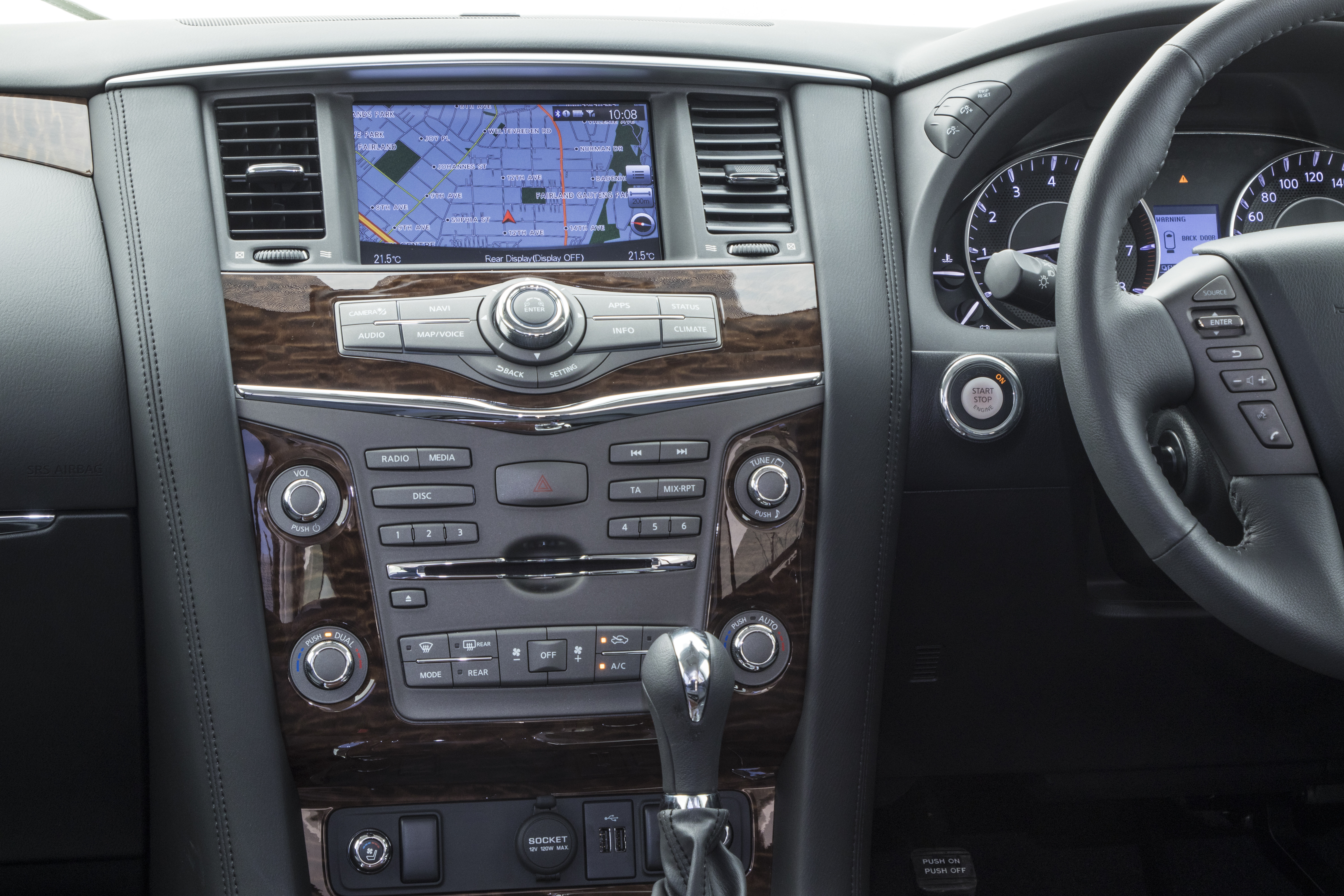 Flared wheel arches are home to 18-inch alloys – surprisingly humble in a segment where 20-inch rims is considered a minimum requirement. But there’s method in this madness: the smaller wheels allow the fitment of taller 265/70 R18 all-terrain tyres – proof that the Nissan has off-roading firmly in its sights.

Because of a lofty 272mm ground clearance, the side steps aren’t just for show, either, even though they will almost always snag obstacles out on the trail, and have a habit of collecting mud in order to deposit it on trouser legs when you get in and out …

In an effort to make the rear look less blunt and utilitarian, Nissan has added a rooftop spoiler, together with clear-lensed taillight clusters with LED elements. A beefy towbar is integrated into the rear bumper design. 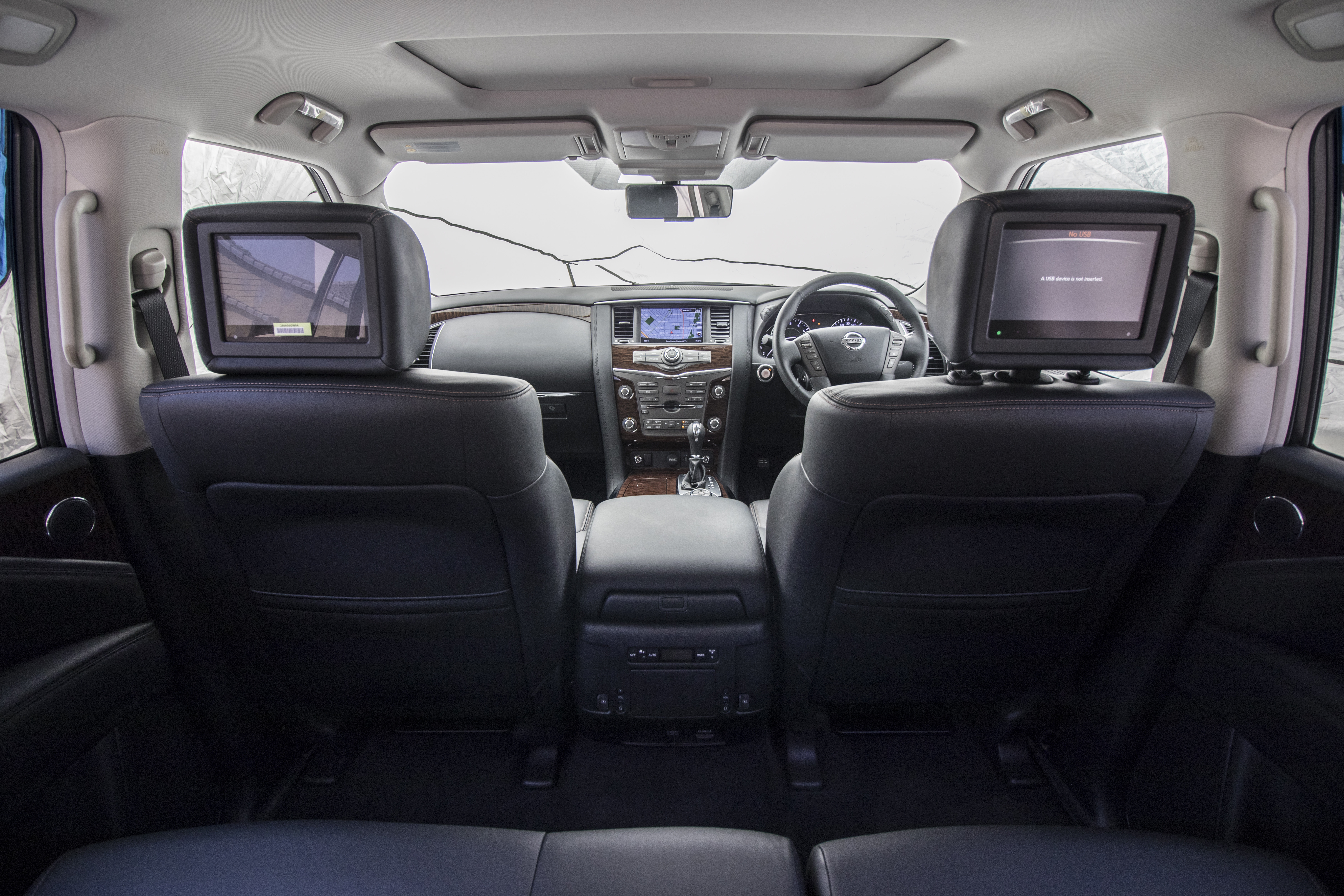 The interior exudes an air of old-school elegance that you’ll either adore or detest. There’s a whole herd’s worth of hide, covering not only the seats, but also the dash and the door panels – the latter with a Seventies-era ruched effect.

Not everything feels like it’s been extracted from a time capsule, though: the full-colour touchscreen in the centre stack is very much 21st Century.

However, the switchgear is decidedly old-fashioned. The array of buttons, switches and controls on the centre stack would do the flight deck of Starship Enterprise proud, and there are more more on the multifunction steering wheel, as well as the instrument binnacle’s cowl. 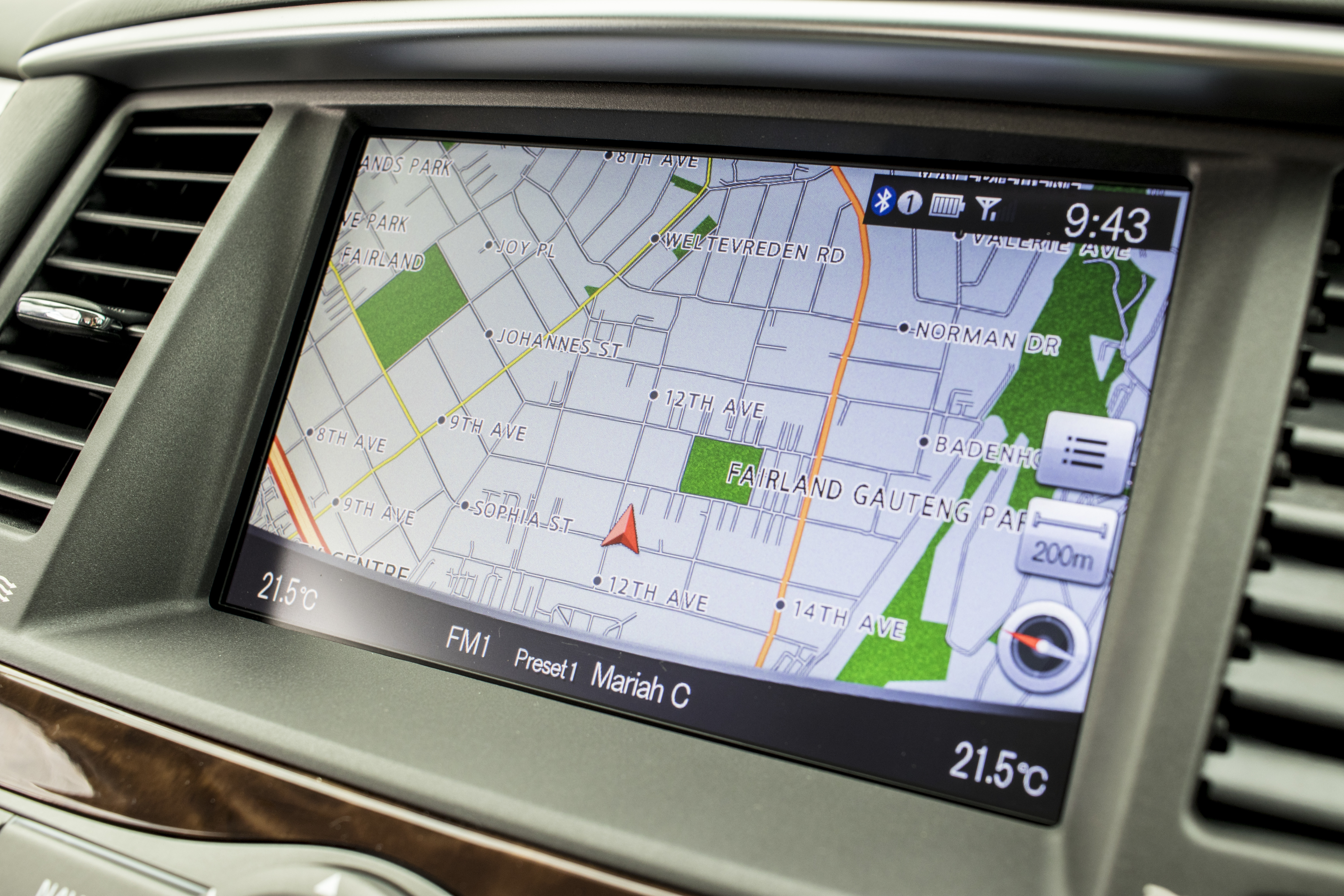 The result is anything but intuitive, and it’s probably worth spending a bit of time with the owner’s manual. Often, what’s accessible on the touchscreen is duplicated by conventional buttons or switches and, in overall terms, the set-up lacks the slick consistency of more modern designs.

Accommodation is roomy and plush. The front seats feel like armchairs and offer full electric adjustment, plus heating and cooling. The centre row has plenty of space for three, and also has access to a pair of AV screens, inserted into the back of the front seat head restraints.

Even the third row of seats, usually compromised and cramped, provides viable seating for two adults, albeit with limited legroom. Access to these seats requires some effort, but you don’t need to be a contortionist. 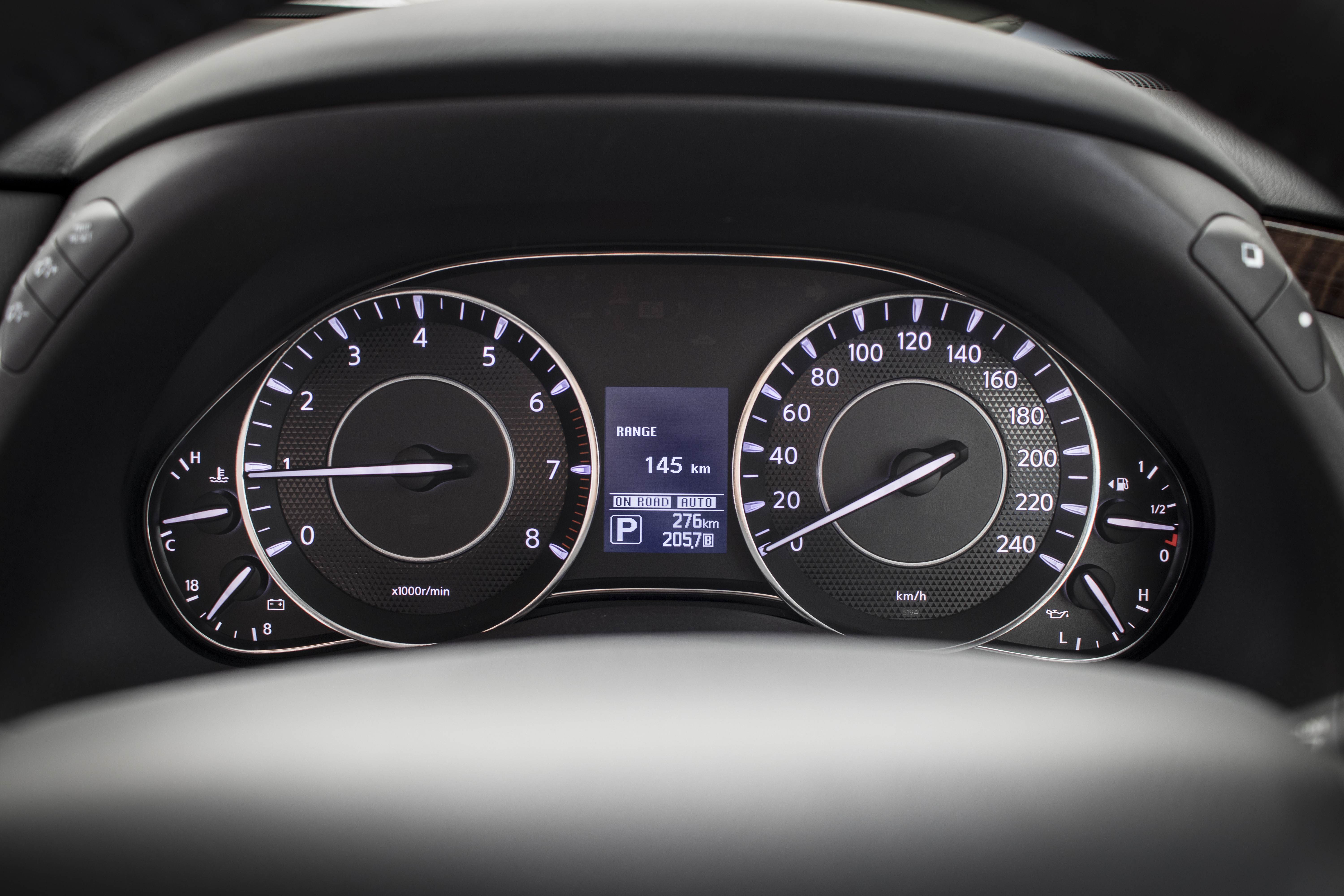 Another benefit of the Patrol’s considerable size is that there’s still 550 litres of luggage space behind that third seating row. Fold that bench seat into the load bay floor, and cargo capacity jumps to 1,475 litres. For once, you can leave the Venter trailer at home …

Of course, the Patrol is loaded with every possible luxury and convenience item you could possibly think of: electric everything, sunroof, dual-zone climate control, keyless entry, motorised tailgate, privacy glass … the list goes on.

A raft of safety systems is further proof of the Patrol’s up-to-date technological credentials. Over and above the usual multiple airbags, ABS, stability control and the like, it offers intelligent systems such as blind spot intervention, adaptive cruise control, pre-emptive emergency braking, lane departure warning, and more.

Given its size and weight, the presence of a lusty, normally aspirated V8 engine is a welcome one. With oodles of power and torque, the 5.6-litre mill delivers the kind of effortless performance and low-down lugging power a large all-terrainer demands. 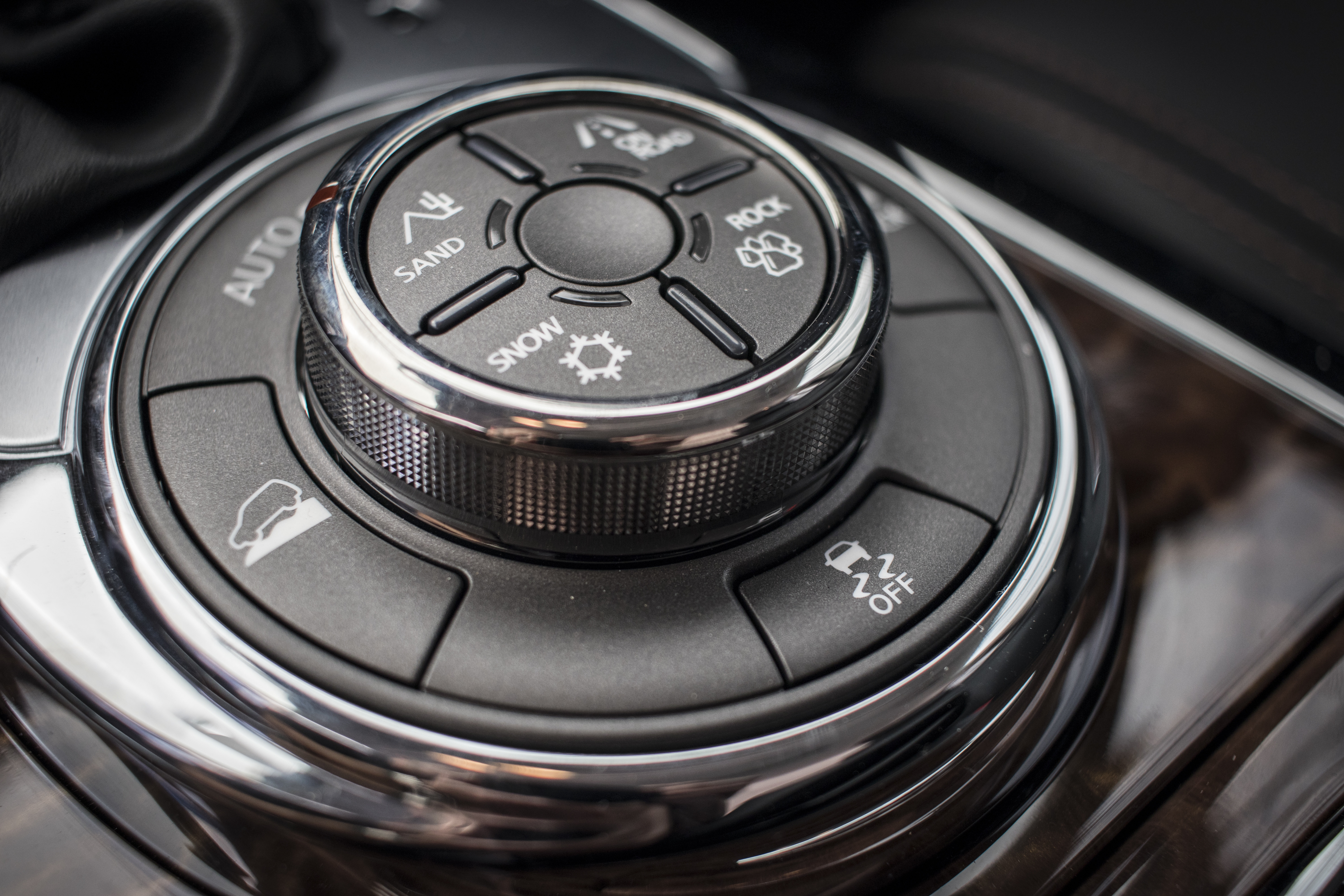 The seven-speed auto gearbox is also perfectly suited to the task, with super-refined shifts and a good selection of ratios. Progress on tar is composed and even graceful, with surprisingly low noise levels, except for the welcome growl of the V8 when prompted by the throttle.

Yes, the combination of the raised seating position, the Patrol’s ample girth and mass, and a hydraulic suspension tailored for comfort, means that the ride is wafty, accompanied by a steering that can feel a little vague.

But don’t underestimate the big Nissan: it can gather its skirts with alacrity, and has a real appetite for long-distance kilometres.

Progress is swift, although a heavy foot on the loud pedal means being punished at the petrol pump: Nissan claims a 14.4 litre/100km consumption average, but I struggled to keep it below 20 litres/100km. Thank goodness for that 140-litre fuel tank!

Let’s not forget that the Patrol also has the right off-road stuff: a low-range transfer case, intelligent all-wheel drive, a rear limited slip diff and differential lock, as well as a host of dial-selectable off-road driving modes. 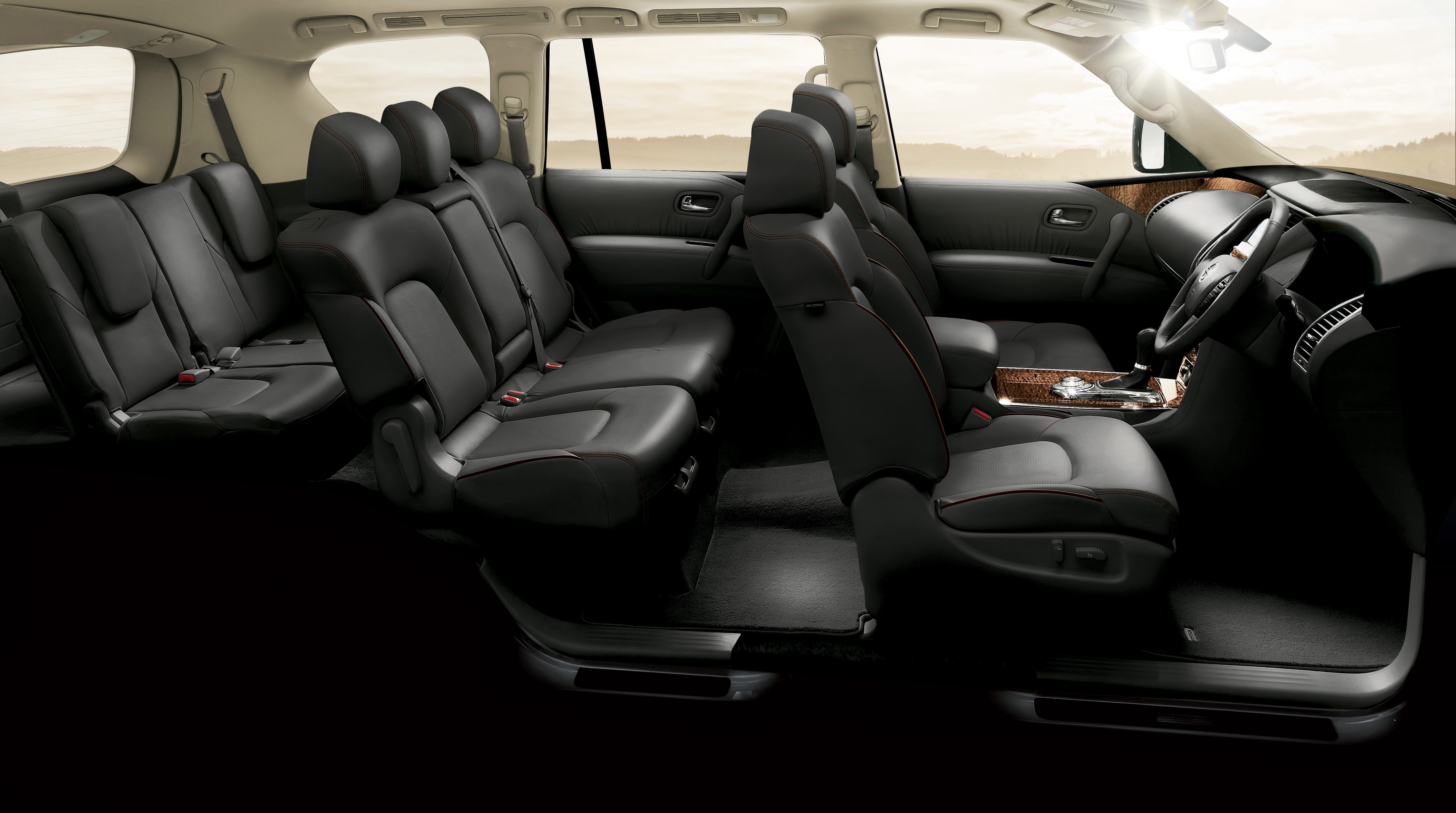 Decent approach and departure angles, together with the big V8’s low-down grunt, also contribute. That said, the reality is that the Nissan’s all-terrain talents are limited by its unwieldy dimensions. It can tackle daunting obstacles, but don’t ask it to negotiate tight and twisty trails.

Indeed, the Patrol is at its best blasting across vast sections of poor gravel, where the suspension soaks up bumps and dips, the air-con keeps the dust out and the temps down, and the ride height makes short work of any obstacles.

In real terms, this latest Nissan Patrol doesn’t have too much in the way of competition. It is not as sophisticated as the Land Rover Discovery, but it’s bigger, more powerful and arguably more comfortable, if also more cumbersome. 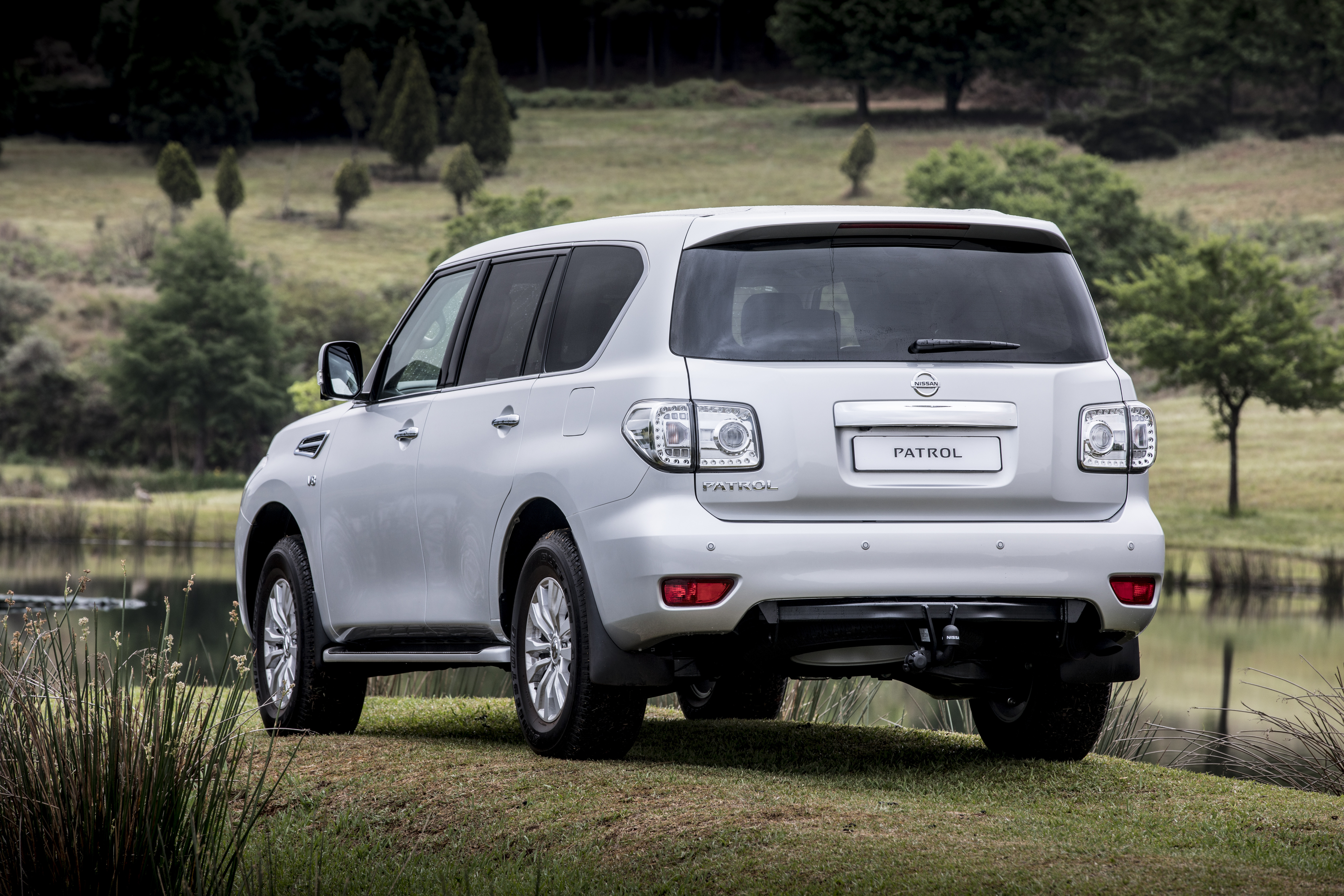 It’s closest rival in terms of size and intent is Toyota’s Land Cruiser 200 VX-R. The Cruiser is turbodiesel-powered, however, which may be an advantage in tough off-road conditions, but can’t match the Nissan’s silky V8 for free-revving refinement, nor aural pleasure.

Admittedly, the Nissan Patrol is not for everyone. By modern standards, it’s simply too big and too thirsty. But those who prefer an old-school, regally comfortable and utterly effortless seven-seater SUV with lots of power and no pretensions will find lots to like at the helm of this brutal ute. DM

Supremely effortless on and off-road. Space to spare. Glorious V8.

Just too cumbersome – and thirsty!