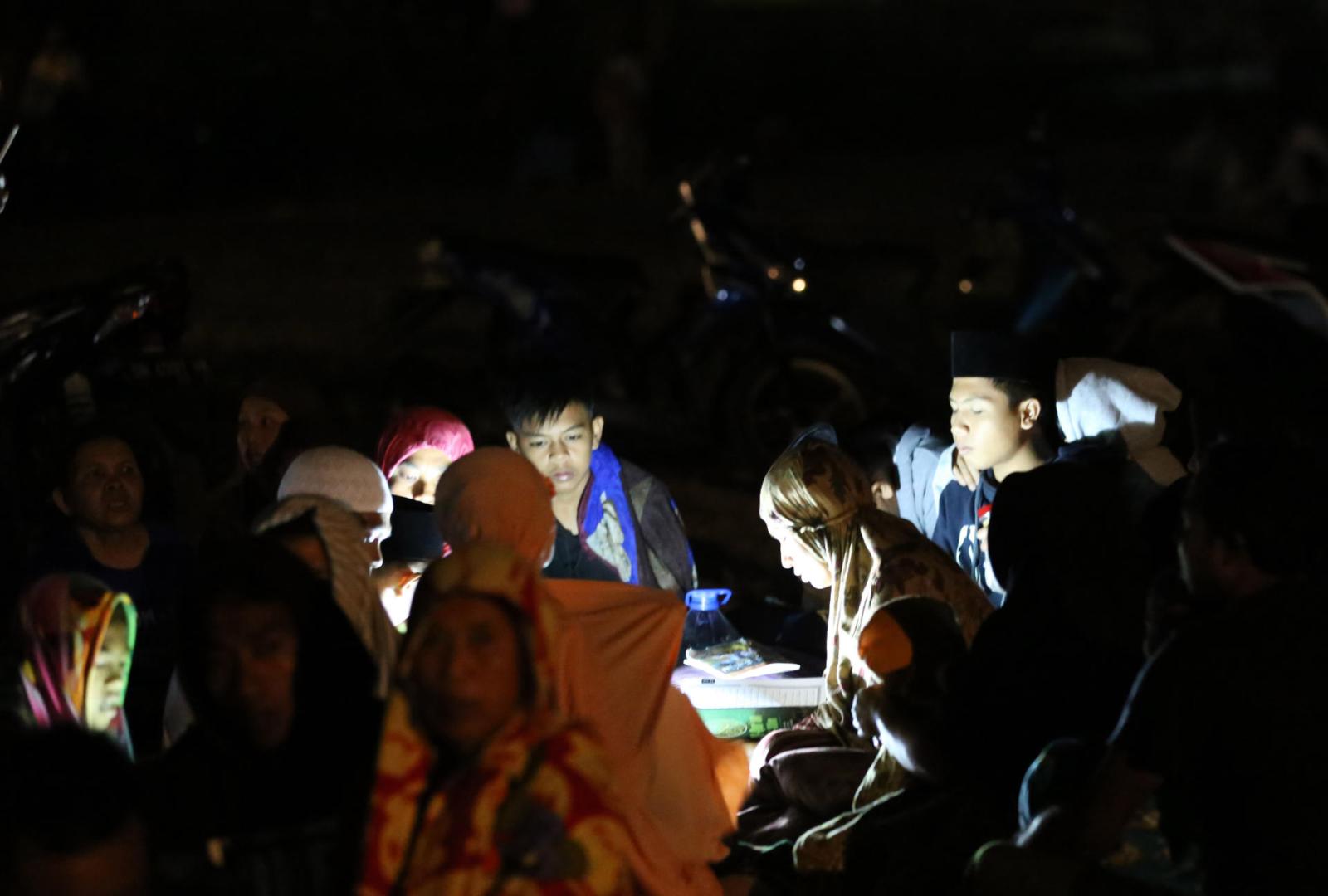 Residents read the Koran during aftershocks at Duman Village in Lombok, West Nusa Tenggara, Indonesia, 05 August 2018. Reports state that the magnitude 7.0 earthquake was centered on the Indonesian island of Lombok nearby of Bali. EPA-EFE/STR

The death toll from a devastating earthquake on the Indonesian island of Lombok jumped to 319 Thursday, as strong aftershocks triggered panic among traumatised survivors waiting for aid in the worst-hit regions.

The shallow 6.9-magnitude quake Sunday levelled tens of thousands of homes, mosques and businesses across Lombok, with relief agencies only just starting to reach survivors in some of the worst-hit areas four days later.

“Our latest update is that 319 people died,” said Indonesia’s chief security minister Wiranto, who like many Indonesians goes by one name, adding that rescue efforts were ongoing and complicated by aftershocks.

Around 1,400 people were seriously injured and more than 150,000 displaced, authorities said earlier.

Most of the displaced are sleeping under tents or tarpaulins near their ruined homes or in evacuation shelters that are short of food, clean water and medical help.

Makeshift medical facilities have been set up to treat the injured.

Survivors of the quake have also been shaken by hundreds of aftershocks, including a shallow 5.9-magnitude quake Thursday which caused people to flee evacuation shelters crying and screaming.

Motorcycles parked on the street in northern Lombok’s Tanjung district toppled over and the walls of some nearby buildings collapsed.

“We were stuck in the traffic while delivering aid, suddenly it felt like our car was hit from behind, it was so strong,” witness Sri Laksmi told AFP.

“People in the street began to panic and got out of their cars, they ran in different directions in the middle of the traffic.”

Authorities and international relief groups have begun organising aid, but badly damaged roads have slowed efforts to reach survivors in the mountainous north of Lombok, which bore the brunt of the quake.

Aid had begun trickling into some of the most isolated regions by midday Thursday, officials said, but many displaced people still lack basic supplies.

In some parts of northern Lombok, survivors can be seen standing on the road with cardboard boxes asking for donations and food.

“It is already clear that Sunday’s earthquake was exceptionally destructive,” Christopher Rassi, the head of a Red Cross assessment team on Lombok, said in a statement.

“I visited villages yesterday that were completely collapsed.”

Workers with heavy machinery are searching the rubble of homes, schools and mosques, with the hope of finding any survivors fading.

There are fears that two collapsed mosques in north Lombok had been filled with worshippers.

Rescuers have found three bodies and also managed to pull one man alive from the twisted wreckage of one mosque in Lading Lading village, while at least one body has been spotted under the rubble in Pemenang.

Authorities are gathering information from family members with missing relatives to determine how many more people may have been in the buildings when they collapsed, national search and rescue agency spokesman Yusuf Latif told AFP.

Across much of the island, a popular tourist destination, once-bustling villages have been turned into virtual ghost towns.

Evacuees in some encampments say they are running out of food, while others are suffering psychological trauma after the powerful quake, which struck just one week after another tremor surged through the island and killed 17.

There is a dire need for medical staff and “long-term aid”, especially food and medicine in the worst-hit areas, government officials said.

About 200 cars packed with food, medicine and basic supplies were sent to heavily impacted regions in the north and west Thursday morning, Agung Pramuja, a spokesman for Mataram mitigation disaster agency told AFP.

But some evacuees have complained of being ignored or experiencing long delays for supplies to arrive at shelters.

At a shelter in hard-hit Kayangan, new mother Rusnah, who like many Indonesians goes by one name, said she needed basic supplies for her children.

“I’m still in pain from giving birth,” she told AFP “I need diapers, I need milk.”

Other evacuees said they were subsisting on a diet of instant noodles and needed clean water and bedding.

The Indonesian Red Cross said it had set up 10 mobile clinics in the north of the island.

A field hospital has also been established near an evacuation centre catering to more than 500 people in the village of Tanjung.

Kurniawan Eko Wibowo, a doctor at the field hospital, said most patients had broken bones and head injuries.

“We lack the infrastructure to perform operations because (they) need to be performed in a sterile place,” Wibowo told AFP.

Aid groups say children are particularly vulnerable, with many sleeping in open fields and suffering illnesses from lack of warm clothing and blankets. DM