Ford Figo 1.5 Trend Hatch AT: More than you bargain for

Ford Figo 1.5 Trend Hatch AT: More than you bargain for

If South African motorists weren’t such image-conscious buyers, the Ford Figo would sell in even bigger numbers than it does. Judged on capability and features alone, it offers an honest and very persuasive package.

South Africans love their cars – and with good reason. In the virtual absence of an effective public transport infrastructure, we’re heavily reliant on the independence and safety provided by an own vehicle.

But the emotive quotient we attach to our cars is also due to the status we associate with those wheels: in the public eye, you are what you drive. Which explains why many South Africans spend more on car instalments than on home bond repayments.

It’s that willingness to commit a significant slice of income to personal mobility that supports perhaps the most competitive car market in the world, with some 2,000 models vying for the attention of around 320,000 passenger car buyers annually. 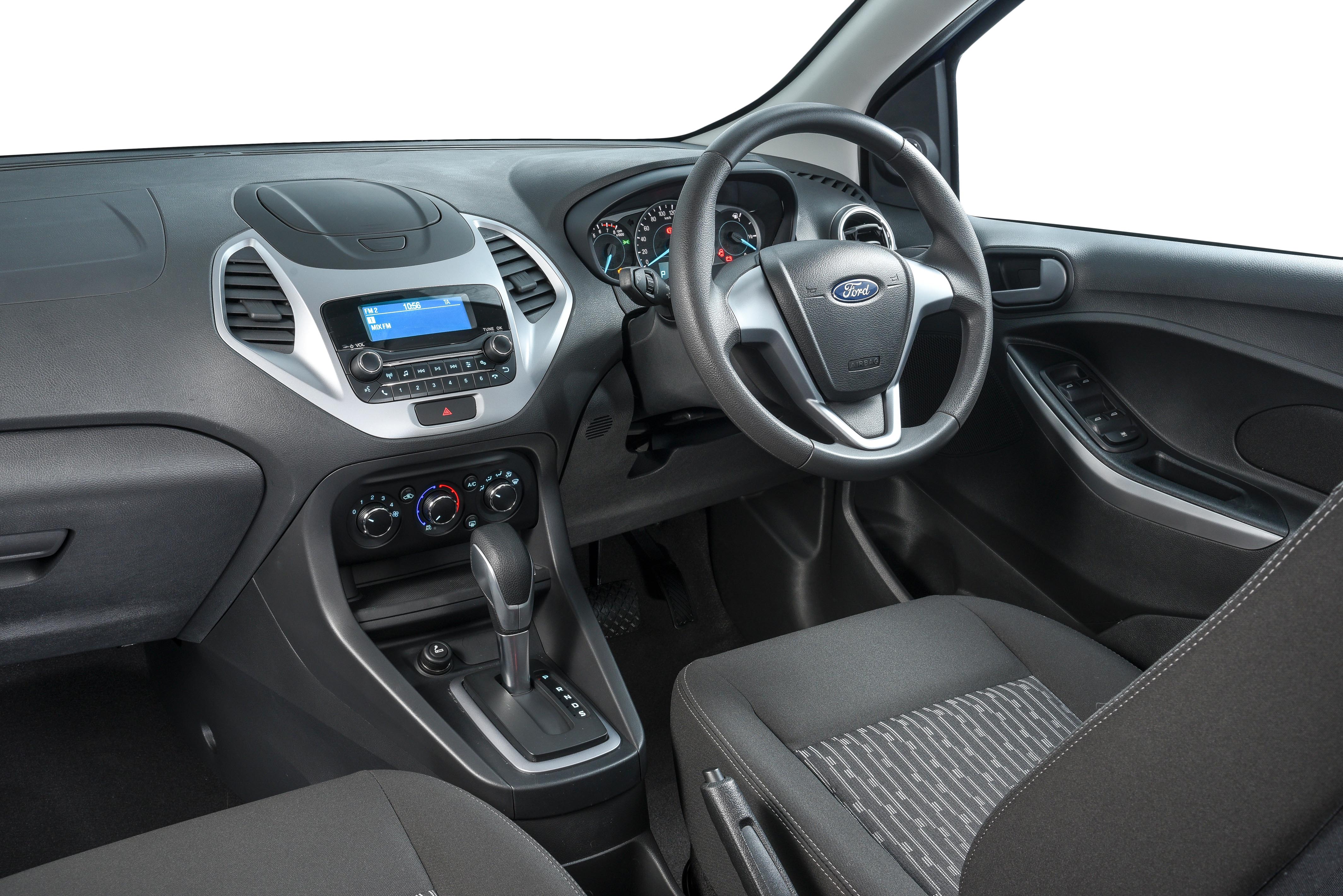 However, the hard reality of a soggy economy continues to force the focus of car buyers towards smaller, more affordable models. The Ford Figo is a good case in point.

Recently updated, the Figo is Ford’s most accessible model, with pricing starting at R181,300. That’s relatively affordable in comparative terms, although it’s still a significant lump sum that most buyers in this league will have to spread over 60 months.

The Figo comes in sedan and hatchback formats, but if you want an automatic model, the top-line 1.5 Trend Hatch AT is your only option. The convenience offered by auto gearboxes, especially in city traffic, means they are becoming increasingly popular in entry-level cars.

There was a time, of course, when auto gearboxes were simply too heavy, too inefficient (and too expensive) to be fitted to small, entry-level models. But that’s no longer the case: the six-speed auto transmission in the Figo is slick and effective. 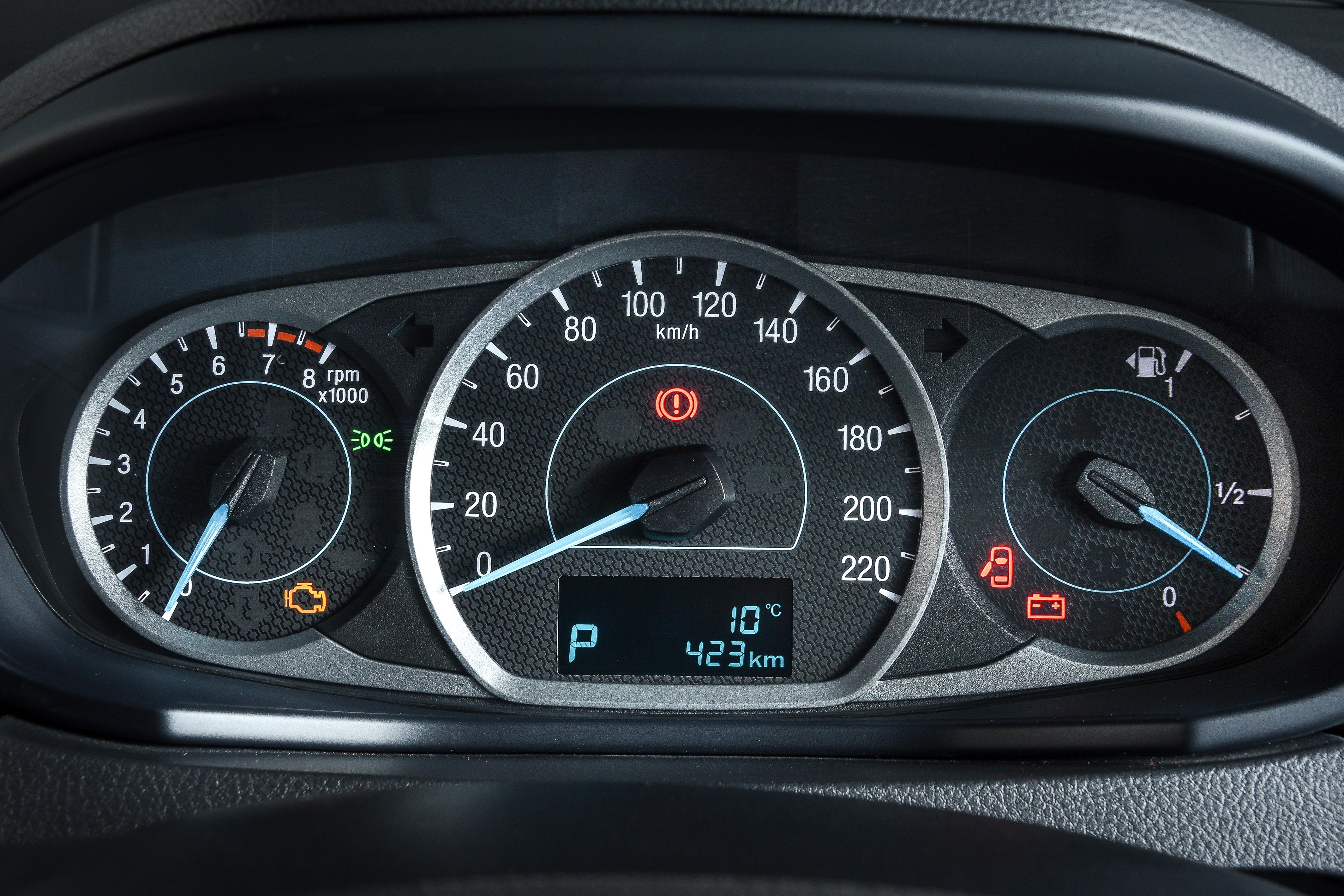 In visual terms, the changes to this updated Figo aren’t radical, but they contribute to a smarter, more resolute appearance. There’s a new honeycomb grille (chromed on Trend models) and a new bumper with restyled trim and fog light surrounds.

The rear gets new tail light clusters and a tidier bumper, while the 14-inch alloys still look too small for the wheel arches, but feature a new multispoke design. Add a subtle roof spoiler and blacked-out B-pillars, and the overall effect is neat enough in a generic, city runabout kind of way.

The interior follows a similarly unassuming upgrade path. New fabrics for the seats and door panels, and a decluttered dashboard are the highlights.

Practicality and ease of use remain the cabin’s primary focus, and that’s a good thing: the controls are intuitively arranged, the view of the instrument cluster is unimpeded, and the packaging ensures decent levels of comfort and convenience. 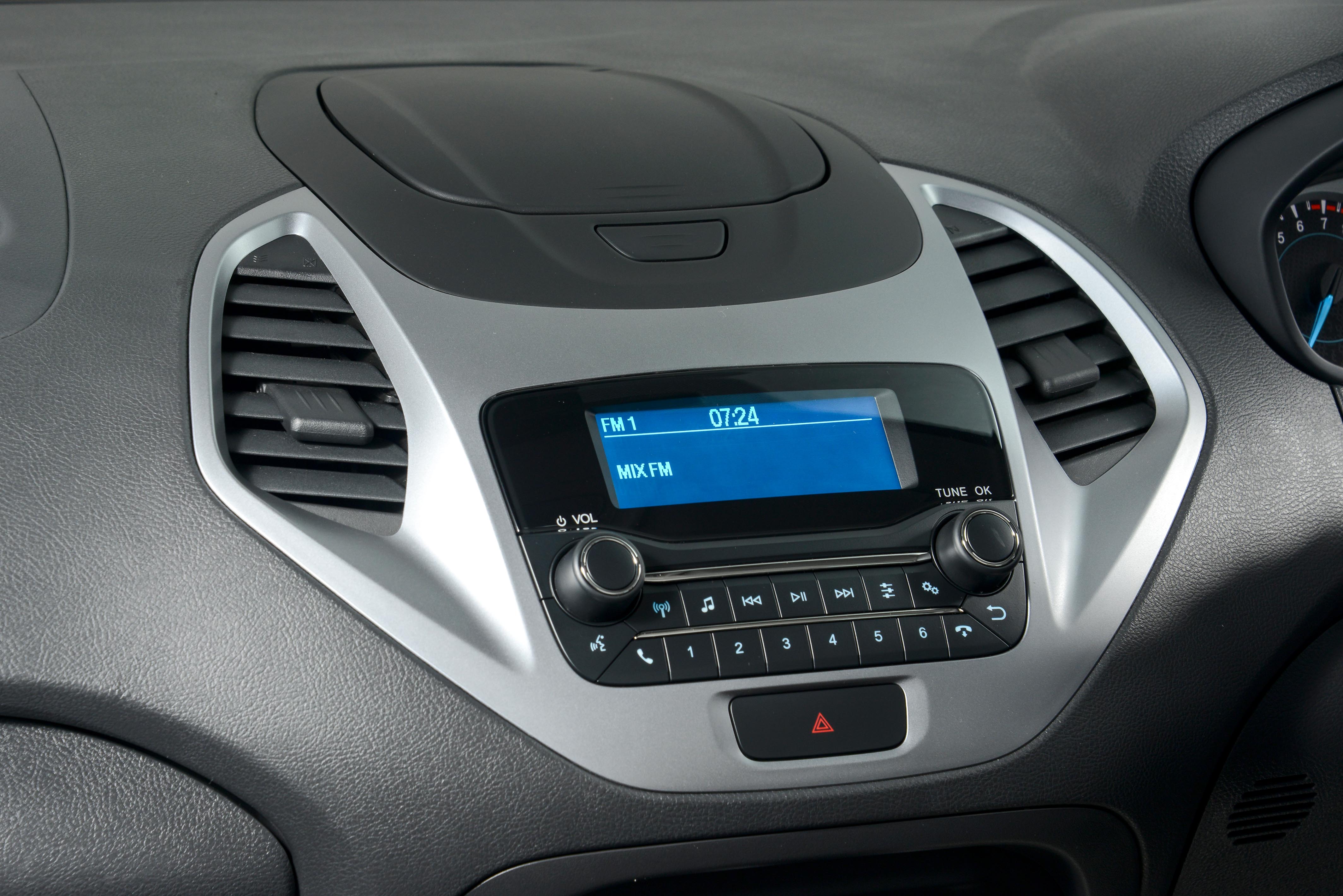 In the Trend, the list of features ticks most of the important boxes, certainly in entry-level terms. The audio system is a particular highlight: for a budget car system, it delivers a full, well-balanced sound that puts many a fancier set-up to shame in sonic terms.

It also scores high marks as far as user-friendliness is concerned. Bluetooth pairing with smartphones is a quick and painless affair, and both making calls and streaming music are child’s play.

Comfort levels are surprisingly good, although taller folk might find rear accommodation short of leg room – this is a small car, after all. At 256 litres, the boot is adequate at best, but you can fold down the 60/40 split rear bench to increase luggage space if needed.

One of the most significant changes to this latest Figo is the drivetrain. It features a new, normally aspirated 1.5-litre three-cylinder engine that’s keen to rev, and fun to use. It lacks the low-down punch of a turbo engine, but it’s still surprisingly peppy, even at power-sapping Reef altitudes.

The lusty little power unit has a useful 88kW on tap, although it needs to spin all the way to 6,000rpm to deliver that urge, while the 150Nm of twist isn’t exactly generous, but quite sufficient in this application. 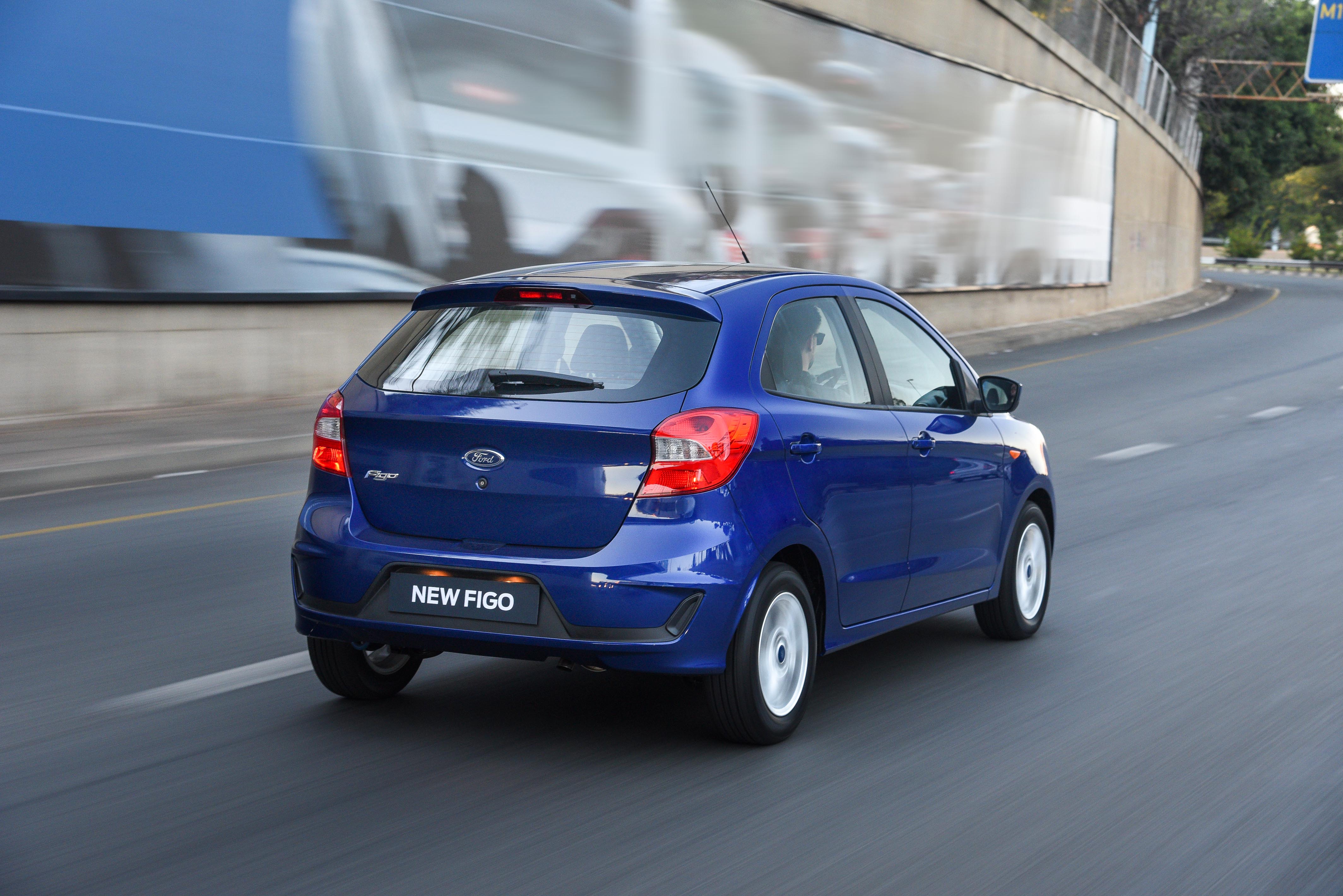 The automatic gearbox is also new, and is endowed with a well-spaced set of ratios that manage to make the most of the engine’s potential. Gear changes are smooth and fairly swift, and there’s a Sport mode which speeds up cog swaps and allows higher revs between change points.

Driving the Figo can be as mundane or as entertaining as you like it to be. The little hatch feels eager on the move, and with the gearbox in Sport mode, you can pedal it along with a fair amount of enthusiasm.

Predictably, the power steering is over-assisted, which dulls steering feel, but there’s plenty of feedback from the chassis. The 14-inch wheels are shod with taller-profile tyres which benefit ride comfort, and manage to provide sufficient grip for sure-footed cornering.

Tackle the twisties with some vigour, and body roll comes into play, while pushing into tight corners too hard, will eventually coax the little Ford into speed-scrubbing under-steer.

However, the Figo isn’t meant to be a hot hatch, and its real focus is on ease of use: a mission it accomplishes with relaxed and confident ease. Its compact dimensions and light steering make for stress-free parking, and hill start assistance means pulling away on gradients is a cinch.

If things do go awry, there’s ABS anti-lock assistance for the brakes, as well as dual front airbags, and even traction control. 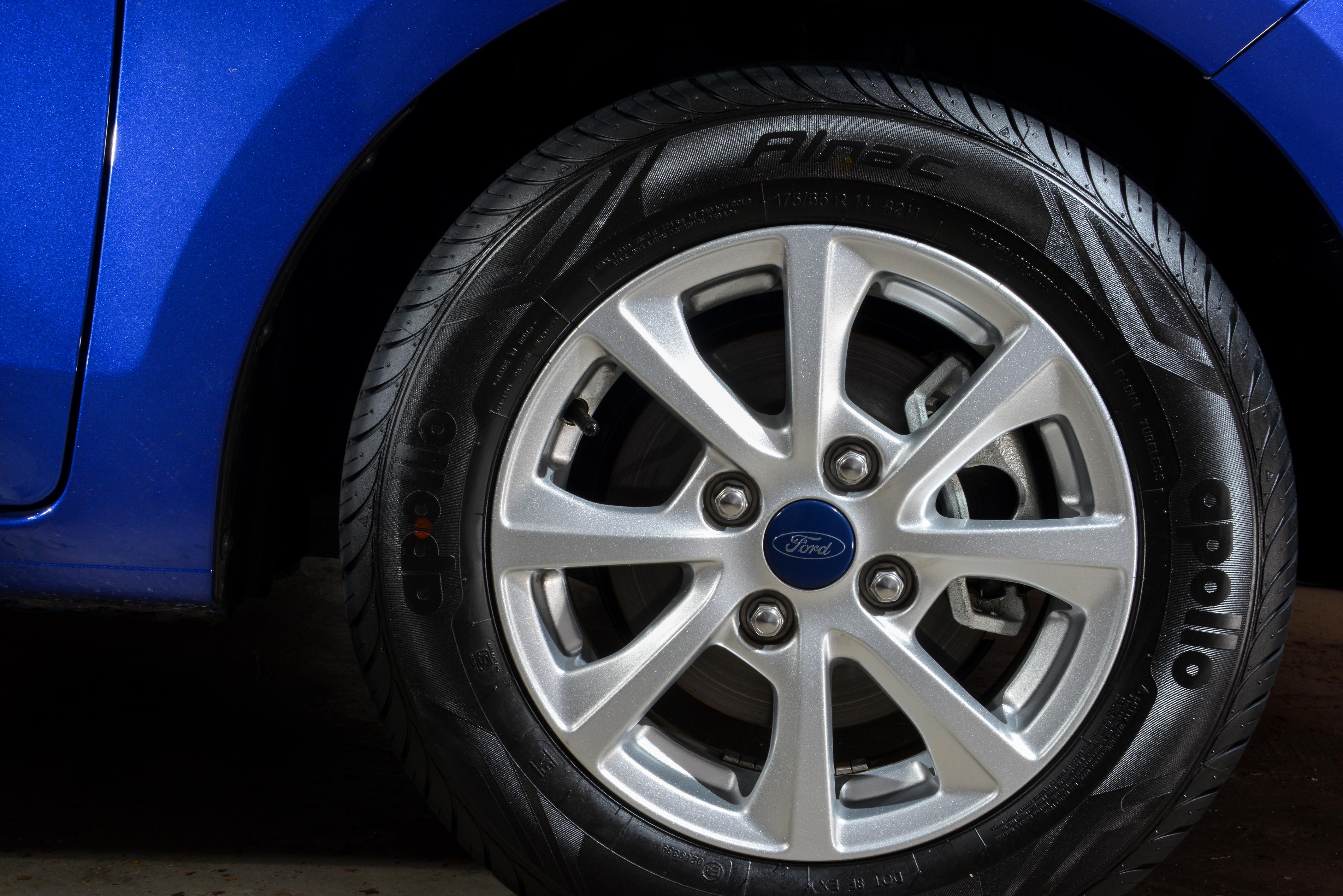 Budget-conscious buyers will also appreciate the Figo’s newly extended service plan, which is now valid over four years and a distance of 60,000km. When you’re turning over every cent, those free services reduce running costs significantly.

The Ford Figo Hatch 1.5 Trend AT is an honest, well thought out, budget-focussed runabout with wide appeal.

It’s not as cutting edge as its similarly sized but more sophisticated (and dearer) Fiesta stable mate. Nor is it the cheapest in its segment. But its mix of talents and features deliver a convincing and competent package.

In fact, the Figo begs an important question: if getting from A to B in reasonable comfort and safety is the priority, does the average motorist really need more? The Figo always delivers more than you bargained for – and that’s its most impressive attribute. DM

Lacks the Fiesta’s freshness. Manual model offers even more bang for the buck.