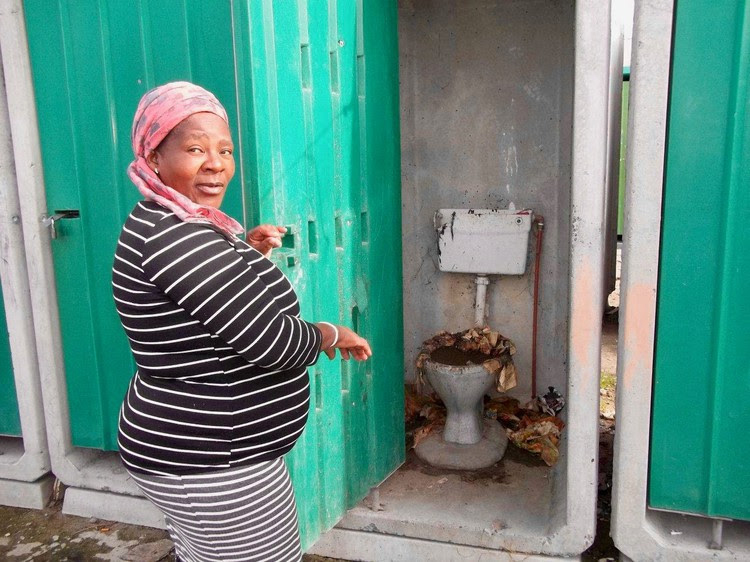 In July community leader Phatheka Mute showed GroundUp the state of the toilets in her neighbourhood in Khayelitsha. Photo: Vincent Lali

Because janitors don’t have inoculations, residents live with faeces.

Six years since the implementation of a top-up janitorial service, residents in different informal settlements in Khayelitsha are still complaining about blocked, damaged and filthy toilets.

In the past few weeks, GroundUp has reported on toilets that have not been cleaned for many months, some for over a year, in Enkanini, Ndlovini, K2 informal settlement, and Green Point. Each time the answer from the City of Cape Town was the same: the top-up janitorial service has been suspended due to “challenges with the procurement of inoculations”.

The janitorial service, proposed to the City by the Social Justice Coalition (SJC), was to improve the quality of sanitation in informal settlements. The date for implementation was 30 June 2012, and the service would include daily cleaning of flush toilets, standpipes and surrounding areas; doing minor repairs of flush toilets; and reporting all instances where more extensive repairs were needed.

Coalition general secretary Axolile Notywala said that his organisation started monitoring the service in 2012 soon after it was established. He said that the SJC had submitted a report to the city in 2013 about the issues it had uncovered.

“After this report, we continued to monitor and engage with the city trying to get them to act and resolve many of these challenges. The city often denied that these challenges existed even though the evidence was clear from these reports,” said Notywala.

According to the 2013 SJC report, the problems included: payment failures to janitors, lack of inoculations, confusion about the employment process, insufficient equipment, and a shortage of gloves and masks.

“It became a challenge for us to continue engaging the city when [the then councillor for utilities] started to attack us, and said we would no longer be involved in the programme.

“We then made a decision to approach the courts and include some of the challenges we have seen through the janitorial service as part of our court papers. We filed our court papers in 2016 and it has since become even more difficult to engage with the city on sanitation issues due to this court case,” said Notywala.

Nangamso Ngaleka worked as a janitor in RR Section informal settlement on a six-month contract in 2013. She was inoculated when she started working. But she says there was a shortage of protective gloves, a lack of chemicals to clean the toilets, and she was not paid her full salary.

According to a 2013 article on IOL, workers exposed to human waste are at increased risk of contracting polio, typhoid fever and Hepatitis A and B.

“My contract was from June to December 2013, and I was paid R1,200 fortnightly. There was one time I only got paid R400. I wasn’t given an explanation about why this happened, but I eventually got paid what I was owed. Some of my colleagues did not get paid at all.

“My duties included sweeping, washing and pouring chemicals inside the toilet, but there were times where we wouldn’t receive the chemicals and it would be tough to clean. My contract was not renewed after the six months, but I recently heard that they were not taking people on as janitors any more because there were no injections,” said Ngaleka.

Mayoral Committee Member for Informal Settlements, Water and Waste Services Xanthea Limberg, said that the city had to terminate its tender for staff inoculations because of a change in ownership of the service provider.

“Two Request for Quotations (RFQs) have been put out but unfortunately neither attempt has been successful in procuring a temporary service provider. A third RFQ is currently under way, and we are hopeful that this attempt will be successful in securing our ability to provide inoculations until a tender is in place. The city is unfortunately unable to provide a timeframe at present, but we are doing all we can to resolve this as a matter of urgency while remaining legally compliant,” said Limberg.

Limberg said the city depots were assisting with the maintenance normally provided by janitors as much as they were able to.

Asked whether janitors could not receive inoculations from any public health facilities, Mayoral Committee Member for Safety and Security JP Smith said:

“The inoculation of employees is done under the Occupation Health Act. This falls outside the ambit of the City’s Health Department. City clinics only store Extended Programme of Immunisation vaccines for children.” DM