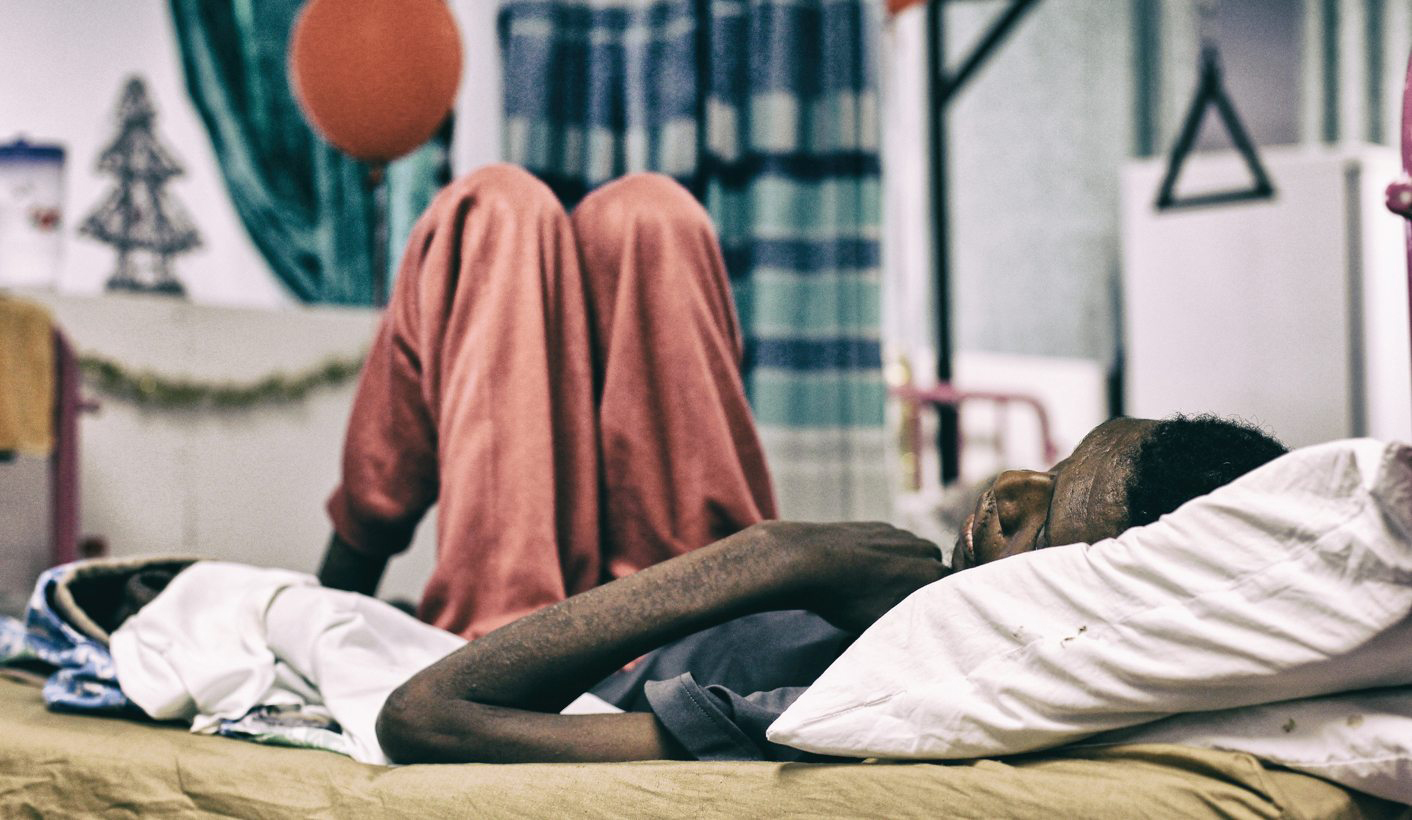 Hospices are associated with dying, but many simply help people to cope with the pain they are experiencing rather than preparing them to die.

“When my daughter suggested I go into hospice I thought she was trying to post me off for good,” 66-year-old Stephen Hogan says with a chuckle.

Sitting upright in a bed at the Wits Hospice in Johannesburg, Hogan says he was diagnosed with prostate cancer two years ago: “I had an op but the cancer had already got out of the prostate and into the bones.”

He pauses and inhales wheezily before continuing: “They wanted to give me chemo and all that but I refused. Didn’t want that. I saw that done to my son you know,” he says, averting his grey-blue eyes.

Hogan watched his son suffer through the taxing chemotherapy, which did not save his life. The way in which he watched his son die, wasting away, traumatised him to the point where he made a decision that that was not the way he would he would deal with his own cancer, even with the chance that the therapy could save or prolong his life.

But what was left for Hogan? He suffers from pain and other symptoms related to his disease.

Born in Turffontein, Hogan worked in construction and building prior to his diagnosis but is unable to afford medical aid. After a number of traumatic experiences at public hospitals, he refuses to even try to access care there.

Even if he were to use the public health sector, only seven facilities in the entire country provide palliative care services, according to the Hospice and Palliative Care Association of South Africa (HPCA).

Hogan’s daughter suggested that he try one of HPCA’s hospices, with around 140 facilities across the country. They are also free at the point of service, providing many economically-strapped South Africans with care.

But Hogan too thought this meant death. “Because that’s what I heard. People come here to die. But that’s completely off the mark.”

Hogan has been a patient at this hospice for a few days so the staff, consisting of doctors, nurses, social workers and care givers, can assist him to manage his pain as well as fluid that has built up in his prostate.

Many people suffering from terminal illnesses do come to hospice to manage the process of coming to the end of their lives. But once Hogan is feeling better, he will return home where hospice staff will make daily visits to check up on him at his request.

According to the WHO (World Health Organisation), palliative care is defined as “an approach that improves the quality of life of patients and their families facing problems associated with life-threatening illness, through the prevention and relief of suffering by means of early identification and impeccable assessment and treatment of pain and other problems, physical, psychosocial and spiritual”.

Johannesburg native Petra Burger had a car accident decades ago which left her disabled. She was then diagnosed with cancer in 1998 from which she recovered. If this was not enough, in 2015 doctors diagnosed her with a rare auto-immune disease.

But, today, sitting in a wheelchair at Wits Hospice where she is just visiting for the day, she is bright, cheerful and clearly very much healthy and alive.

“I’m happy. I’m married. I have quality of life. But this didn’t come easily,” she says. “After my accident, I was in hospital for two years straight. And I was going downhill. I had an amazing team of doctors around me but emotionally I wasn’t okay. I was in an existential crisis. I asked why me?”

Raising her hands above her head she says: “I was unhappy with life and I shouted it out.”

But after being referred to hospice and receiving palliative care from the team of health workers, she completely changed her outlook on life: “They addressed my pain, but pain isn’t just physical. It’s emotional and spiritual. At hospice they provided me with compassion. They listened to me. They provided me with spiritual guidance, to the point where I am able to be the person I am today.”

The person she is today is a person who is nowhere near close to death. She is currently a palliative care activist working at the HPCA full time as the disability main-streaming co-ordinator.

“They gave me hope,” she says. And this assistance didn’t just benefit Burger, but her friends and family too.

“They helped my father, who was suffering with survival guilt from the accident,” she says. “And when (my) girls came over to visit they spoke to them and listened to them. They assisted my friends to cope too.”

“In palliative care health workers will treat the whole person, not just the disease. People are not simply a disease entity, they are human beings,” says chief executive officer of HPCA, Dr Liz Gwyther.

She says that an estimated one out of every 143 South Africans needs, or can benefit, from palliative care each year – yet 82% of the population does not have access to these services.

One of the biggest barriers is that very few health workers are trained in palliative care. No medical institutions have palliative care as part of their undergraduate curriculum and only one, the University of Cape Town, offers post-graduate qualifications for medical students.

But there is a noticeably positive shift in South Africa for palliative care. In 2016 Minister of Health Aaron Motsoaledi set up a steering committee on the topic. And just a year later, the country’s first Policy Framework and Strategy for Palliative Care was approved by the National Health Council.

This document recommends that funding be devoted to palliative care, for increased training of health workers, support of family and caregivers, monitoring access to services and ensuring the availability of necessary medicines as well as well as domestic funding to facilitate access.

Gwyther hopes these ambitions will be realised formally into the National Health Insurance scheme but is concerned that the necessary funding to implement these goals will not be met.

But another major barrier that sees so many patients failing to benefit from palliative care is that patients misunderstand what it means and think that hospice equals death, says Gwyther: “Research has shown that palliative care alongside treatment improves patients’ quality of life, reduces depression and marginally prolongs life. It is vital that people directly affected by serious and life-limiting conditions are empowered to speak up and demand the best care possible for them and their loved ones.”

Forty-nine-year-old Fortunate Nyembe, from Soweto, is someone who has been empowered to speak up. Diagnosed with HIV in 2000, she has suffered many serious health challenges over the years including a stroke and serious gastrointestinal issues requiring a number of operations and many hospitalisations in government facilities.

“When I was diagnosed, there was a lot of stigma, even today. People don’t want to know about you. Your family. You must hide. My life was very very bad. I was vulnerable. I was a mess,” she says.

Through a support group at the Soweto Hospice, she found hope: “I started to learn. I started to socialise. I realised I am not the only one.”

Although the Soweto Hospice in-patient facility has now been closed due to a lack of funds, Nyembe says she found solace and respite there on many occasions over the years. The government only funds 10% of the HPCA’s activities and the rest is sourced from fund-raising and donors.

“While in hospital, people from hospice came to check on me and support me and encourage me,” she says.

Nyembe is now employed as a cleaner for the HPCA and advocates for palliative care in her community. “Most people, especially in Soweto, say ‘if you go to hospice you are not going to come back’.”

She smiles brightly and says: “I don’t know how many times I’ve been sleeping in hospice and look at me, my life is good now.” DM