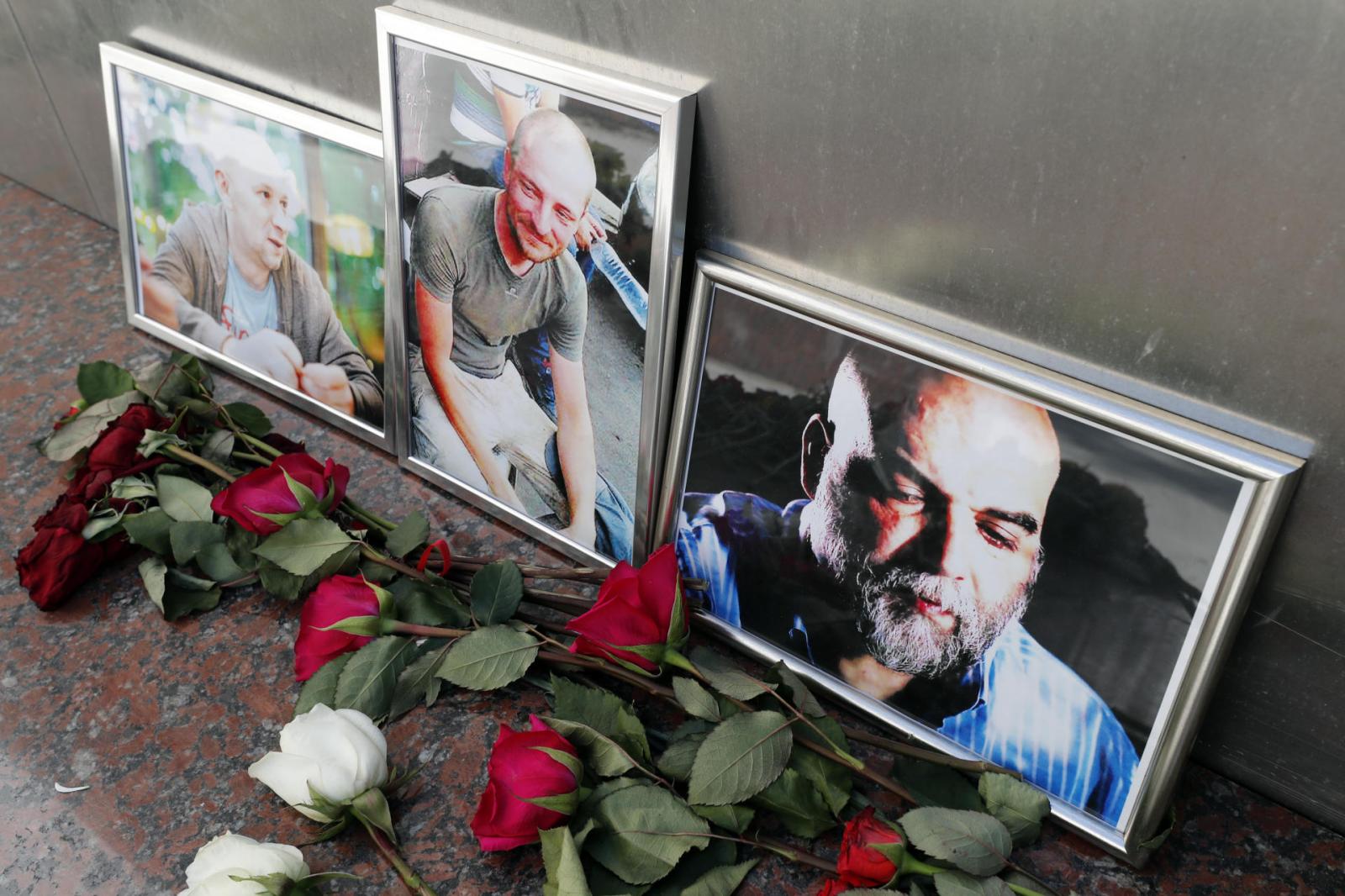 Flowers are placed as a last tribute in front of the photographs of Russian journalists Alexander Rastorguyev (L), Kirill Radchenko (C) and Orkhan Dzhemal (R) outside the Central House of Journalists in Moscow, Russia, 02 August 2018. Russian documentary film maker Alexander Rastorguyev, cameraman Kirill Radchenko and journalist Orkhan Dzhemal were killed the Central African Republic (CAR) where they had arrived on 28 July 2018 to film a documentary about private military companies in the CAR. EPA-EFE/MAXIM SHIPENKOV

The murder of three Russian investigative journalists in the Central African Republic (CAR) has sparked further suspicions about the shadowy Russian mercenary company they were investigating, which some analysts believe is really a front for the Russian military.

In April 2018, a Russian investigative journalist died in suspicious circumstances in Russia after writing about the secret involvement of the same mercenary – a.k.a. private military – company, called Wagner, in the Syrian civil war.

Last Tuesday, local authorities alerted the United Nations (UN) mission in CAR, known as MINUSCA, that the bodies of three Caucasian males and a vehicle with bullet holes in it had been found about 30 kilometres north of the northern town of Sibut, (itself about 150km north-west of the capital Bangui), Vladimir Monteiro, spokesperson and head of media relations for MINUSCA, told the New York-based Committee to Protect Journalists (CPJ).

A statement from the Russian foreign ministry on 31 July said the attack had happened on 30 July and that journalist identification cards found with the bodies revealed the dead men to be freelance reporter Orkhan Dzhemal, documentary director Aleksandr Rastorguyev, and camera person Kirill Radchenko.

The Moscow-based investigative media outlet The Investigations Management Centre (TsUR), financed by exiled Russian businessman Mikhail Khodorkovsky, then said in a statement that the journalists had been on assignment for TsUR, investigating private Russian mercenaries, including Wagner, allegedly working in CAR.

TsUR’s chief editor, Andrey Konyakhin, told CPJ the journalists left Moscow on 27 July and that the last communication with them was the evening of 29 July.

“Those responsible for the killing of Orkhan Dzhemal, Aleksandr Rastorguyev, and Kirill Radchenko must be brought to justice,” said Angela Quintal, CPJ’s Africa programme coordinator and formerly a South African newspaper editor.

“Authorities in the Central African Republic, the Russian government and the UN should act swiftly to conduct comprehensive and transparent investigations into these deaths and ensure the killing of journalists, which is the most brutal form of censorship, is not permitted to take place with impunity,” she said.

The Russian foreign ministry statement said the Russian Embassy in Bangui had not been informed beforehand that the three journalists were in CAR. Embassy staff were in close contact with CAR law enforcement bodies and government agencies to determine the circumstances of their deaths and to arrange for their bodies to be returned to Russia.

The Russian Investigative Committee said in a 31 July statement that it has opened a criminal investigation into the killings.

So who killed Dzhemal, Rastorguyev and Radchenko? In a chronically violent, dangerous and turbulent country like CAR, still wracked by a long civil war, the list of possible suspects must be very long. Some news reports have said the three journalists were stopped at a roadblock manned by men wearing long headscarves, which suggested their killers were members of Seleka, the mostly-Muslim rebel group which overran Bangui and ousted President François Bozizé in March 2013 (incidentally, killing 15 South African troops on the way).

But there are many other armed rebels operating in CAR, including Seleka’s mortal foes, the largely-Christian Anti-balaka group.

Some reports suggest instead that the murderers may have been common criminals as all the three men’s valuables were taken. The thefts do not, of course, rule out the possible complicity of armed rebels.

Ange Maxime Kazagui, minister of communications and spokesperson for the CAR government, said that the journalists’ driver, who survived after fleeing, told the government that the attackers did not speak in French or Sango, the other national language of CAR, apparently suggesting the involvement of foreigners.

Yet there are hints of complicity by the driver himself in the attack as his escape from the attackers has prompted some suspicion.

Kazagui said that the journalists had entered the country using tourist visas and had not registered for media accreditation. The government is co-operating with the UN and the Russian government to investigate the deaths, Kazagui told CPJ.

Monteiro told CPJ that, contrary to frequent practice for the press in CAR, MINUSCA had not been informed of the journalists’ activities.

One human rights activist told Daily Maverick that Wagner should be examined closely in the investigation of the three deaths. The activist, who did not want to be named, said some media had reported that the journalists had visited Wagner’s compound north of Bangui shortly before their deaths and had been turned away.

“So it’s not as though the mercenaries didn’t know they were there.”

This activist recalled that in April 2018 another Russian journalist, Maxim Borodin, 32, who had been investigating Wagner’s role in the Syrian civil war, had died in highly suspicious circumstances in Yekaterinburg, Russia’s fourth-largest city, about 1.400km south-east of Moscow.

Borodin died in hospital on 15 April, two days after a fall from the balcony of his fourth-floor apartment. Viacheslav Bashkov, a friend of Borodin’s, wrote on Facebook that Borodin called him at 05:00 the day before his fall and said that several camouflaged, masked men were outside his apartment and a man with a gun was on his balcony, the Financial Times reported. Borodin called Bashkov back an hour later and said the men were probably conducting a training exercise.

Russian police said they were treating his death as a suicide or accident and didn’t suspect foul play.

But local activists have told Western media they are “very suspicious”.

Borodin had many likely enemies as he had probed Yekaterinburg’s criminal underworld and Russia’s religious right as well as corruption in local government.

However, he had also reported on the secret involvement of Russian private security companies, including Wagner, in the Syrian civil war.

His reports included an investigation of the undisclosed deaths of many Russian mercenaries who had fought on the side of President Bashar al-Assad’s forces in Syria.

Then US CIA director Mike Pompeo told senators during hearings for his nomination to be US secretary of state in April 2018 that “a couple hundred Russians” had died during an attack on US-backed anti-Bashar forces in Syria in February.

They were killed in US air-strikes on pro-Bashar forces in Deir al-Zour, an oil-rich territory in eastern Syria, on 7 February, according to news reports.

After initial denials, Russia’s foreign ministry later admitted that five citizens were likely to have been killed in the bombing while fighting alongside pro-regime Syrian forces on 7 February. Media interviews with families of some of those killed suggest there were at least 200 who died.

Western officials and Russian analysts say the deaths show that the Kremlin is using hired guns to mask its official involvement in the war.

The Guardian quoted several sources as saying that all the mercenaries who died in the Syrian attacked had been employed by the Wagner Group, “a shadowy Kremlin-linked private military contractor. Critics say Moscow uses mercenaries from Wagner to keep official military losses in Syria low,” the paper said.

Others have described Wagner as “Russia’s Blackwater”, a reference to the American mercenary group – or private military company – which did much of the US military’s work in Iraq, especially, where it became notorious in 2007 for killing 14 civilians in one incident in Baghdad.

Wikipedia says Wagner has been reported to have taken part in several other conflicts, including in Sudan and in the war in Donbass in Ukraine, aiding the Russian-backed separatist forces of the self-declared Donesk and Luhansk People’s Republics.

“Others are of the opinion that Wagner is really a unit of the Russian Ministry of Defence in disguise, which is used by the Russian government in conflicts where deniability is called for,” it says.

What exactly Wagner is doing in CAR is about as mysterious as what South African troops were doing in the same country for several years until March 2013 when they left quickly after 15 of their soldiers had died in a firefight with Seleka rebels as they marched on Bangui.

In December 2017, the UN exempted Russia from the arms embargo on the country, allowing it to sell weapons to the government of CAR President Faustin-Archange Touadera to help him combat violence being perpetrated by the many armed groups proliferating across the country.

However, as the South African troops seemed to have been doing too, the Russians are also reportedly in CAR to provide personal protection for a beleaguered president and to protect mining interests.

And, also as South Africa was, the Russians may now have unwillingly found themselves caught up in the war, says Tim Glawion, a research associate at the German Institute of Global and Area Studies (GIGA).

He told the German media house Deutsche Welle that he believed the three men had been killed not because they were journalists but rather because they were mistakenly seen as part of a Russian intervention unit.

“I think the attack was aimed at Russia, not necessarily at the free press.”

Glawion said Russia’s intervention had been welcomed by the government and its supporters but strongly opposed by the many rebel groups and others opposed to the Touadera regime. DM