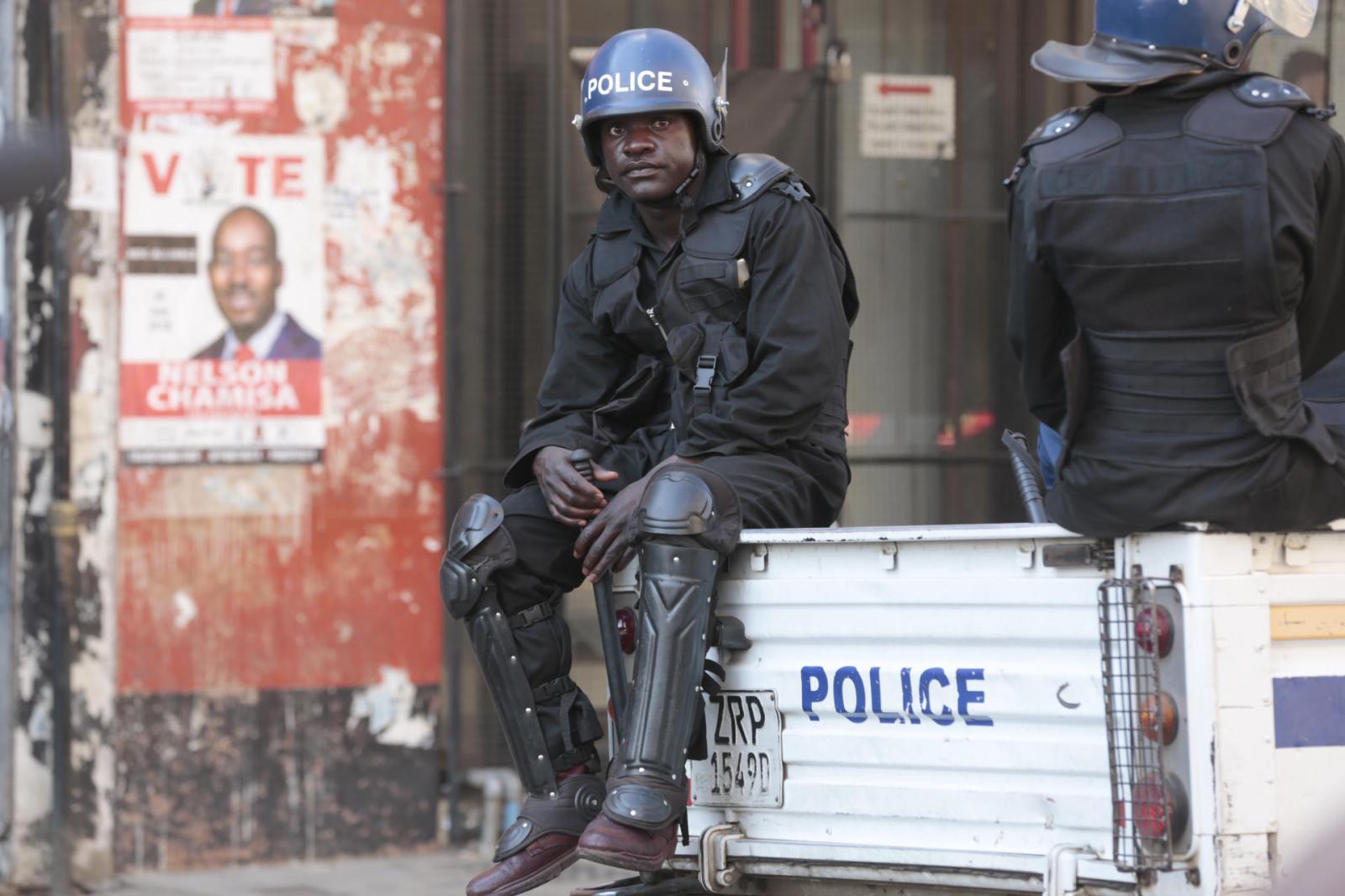 Members of the Zimbabwe Republic Police (ZRP) sit in a police truck as he monitors the situation in Harare, Zimbabwe, 02 August 2018. According to reports, six people have been killed after a violent protests and clashes on 01 August in Harare, following elections in Zimbabwe. EPA-EFE/AARON UFUMELI

Zimbabwe’s long-awaited historic elections are over, and feelings in the capital the morning after the results announcement range from jubilant swagger by the winners, to hang-overed dejection by the losers. Some want to accept the result and move forward, while others are bent on avenging what they say was a cooked election.

Most people in Zimbabwe’s capital, Harare, shunned incumbent president Emmerson Mnangagwa at the polls, but if he wants to open Zimbabwe for business, the 75-year-old, also known as The Crocodile, will need to go on a charm offensive.

There was not a parking spot to be found at Sam Levy’s shopping centre in the city’s posh Borrowdale suburb on Friday morning as the well-heeled ventured out to do their shopping and business after almost a week of election-related disruptions. In the Freshly Ground coffee shop, the mostly white customers fleetingly talked about the elections result before moving on to tell each other about future foreign travel plans and the family over $2.50 cappuccinos on African print couches.

The winner of a peaceful election on Monday was eventually announced around midnight on Thursday – two days before the deadline set in the electoral act –and after six people died when an opposition protest in the city centre turned ugly under the rifles of soldiers.

Zimbabweans had hoped to have left the terror of the military behind with former president Robert Mugabe when he was deposed in November last year, and those who had imagined a better future said they felt crushed.

Opposition MDC Alliance candidate Nelson Chamisa, who declared himself the winner of the popular vote even before the elections started, tweeted on Friday morning that he was not prepared to accept the result. “The ZEC (Zimbabwe Electoral Commission) scandal of releasing unverified fake results is regrettable. ZEC denied our election agent access to results be4 announcement. ZEC must release proper & verified results endorsed by parties. The level of opaqueness, truth deficiency, moral decay & values deficit is baffling.”

Mnangagwa made it over the 50% threshold needed to avoid a run-off election by just 38,780 votes, something which opposition supporters say is just too close to have been by chance.

There is genuine distrust among Zimbabweans due to large-scale elections rigging under Mugabe’s rule, but Zanu-PF traditionally has a large support in rural areas where a big proportion of the voting population lives, so a win isn’t unthinkable. Some have speculated that Chamisa is trying to strong-arm his way into a power-sharing deal.

Many Zimbabweans say Mnangagwa will have to accommodate the opposition in his government in some way if he wants to build the country.

Cleto Manjova, a 37-year-old development worker, said he was expecting “something new” from the elections. “Mnangagwa represents to me a Mugabe system. Mugabe worked 38 years to put into place a very oppressive system,” he said. “With ED (Mnangagwa) we see a continuation of that and military rule in a military state, where the army come to deal with civilian matters at any time, after a mere phone call.”

He said the opposition should go back to the drawing board and consolidate, and even though a government of national unity would be a good idea, he felt the time for this has passed.

“The November events presented a good opportunity for a government of national unity, but I don’t see that happening now. I don’t see Zanu-PF decide to extend an olive branch. There are too many people he (Mnangagwa) needs to reward (with positions).

Even if Mnangagwa reached out, this MDC supporter reckoned Chamisa would not accept.

A Borrowdale resident in his early 40s, who didn’t want to have his name mentioned for professional reasons, said he reckoned Mnagagwa could win the hearts of urban professionals and also the foreign investment community “if he removes the deadwood cabinet and employs five key technocrats for key ministries such as finance, economic development, foreign and home affairs”.

Another Zimbabwean said Mnangagwa should capitalise on the goodwill that the West has shown by drawing in investment and effecting economic growth.

Crosby Pamberi, a Zimbabwean-born economist based in London, who came home for this week’s elections and who is keen to return to his home country should things improve, said if results were correct that Mnangagwa won 50.8% of the vote, it meant he didn’t have the support of half the citizens.

“Three to four-million Zimbabweans left Zimbabwe to live in other countries because they could not trust Mnangagwa’s party with their futures.

“On this basis, Mnangagwa and Zanu-PF do not have the support of the majority of Zimbabweans, across the globe.

He said the way forward was inclusion. This “could include asking Nelson Chamisa and his team to help form a government. They have worked together before and with goodwill on both sides, they can do so again.”

This would resonate with investors and many of the well-educated and well-moneyed Zimbabweans would find their way back. “Individually and collectively, they are an under-valued source of FDI and, if harnessed properly, could be an instrumental investment vehicle to kick-start the economy.”

Nicole Beardsworth, a researcher on Zimbabwean opposition politics at the University of York (United Kingdom), who was also in Zimbabwe for the elections, said: “In the short term, ED (Mnangagwa) needs to release those MDC members who (I believe) are being held without charge after yesterday’s arrests at Harvest House.”

She was referring to the arrest of just over a dozen party faithful at the party’s Harare headquarters (which could do with a facelift inside and out) by police on charges that they were in possession of illegal firearms, grenades, and rocks. Chamisa earlier said this was also a pretext for confiscating the computers the party used to independently collate elections results. It’s a crime in Zimbabwe to publish results before the ZEC announces these, but observers have very diplomatically noted that this announcement could be made much more transparently.

“In the medium term, he needs to allow the MDC councils in Harare the resources and authority necessary to turn the capital back into a functioning city,” she said. “If he hopes to win back their trust and compliance, he will need to focus everything he has on ensuring service delivery, and infrastructure rejuvenation in a city that is literally crumbling.

“Only through providing these services – and providing them equitably to citizens who did not vote for Zanu-PF – will the party truly rejuvenate it’s fortunes and ensure their continued survival beyond 2023.”

For now, Zimbabweans are finding a way to move forward again after what many described as a historic moment. DM