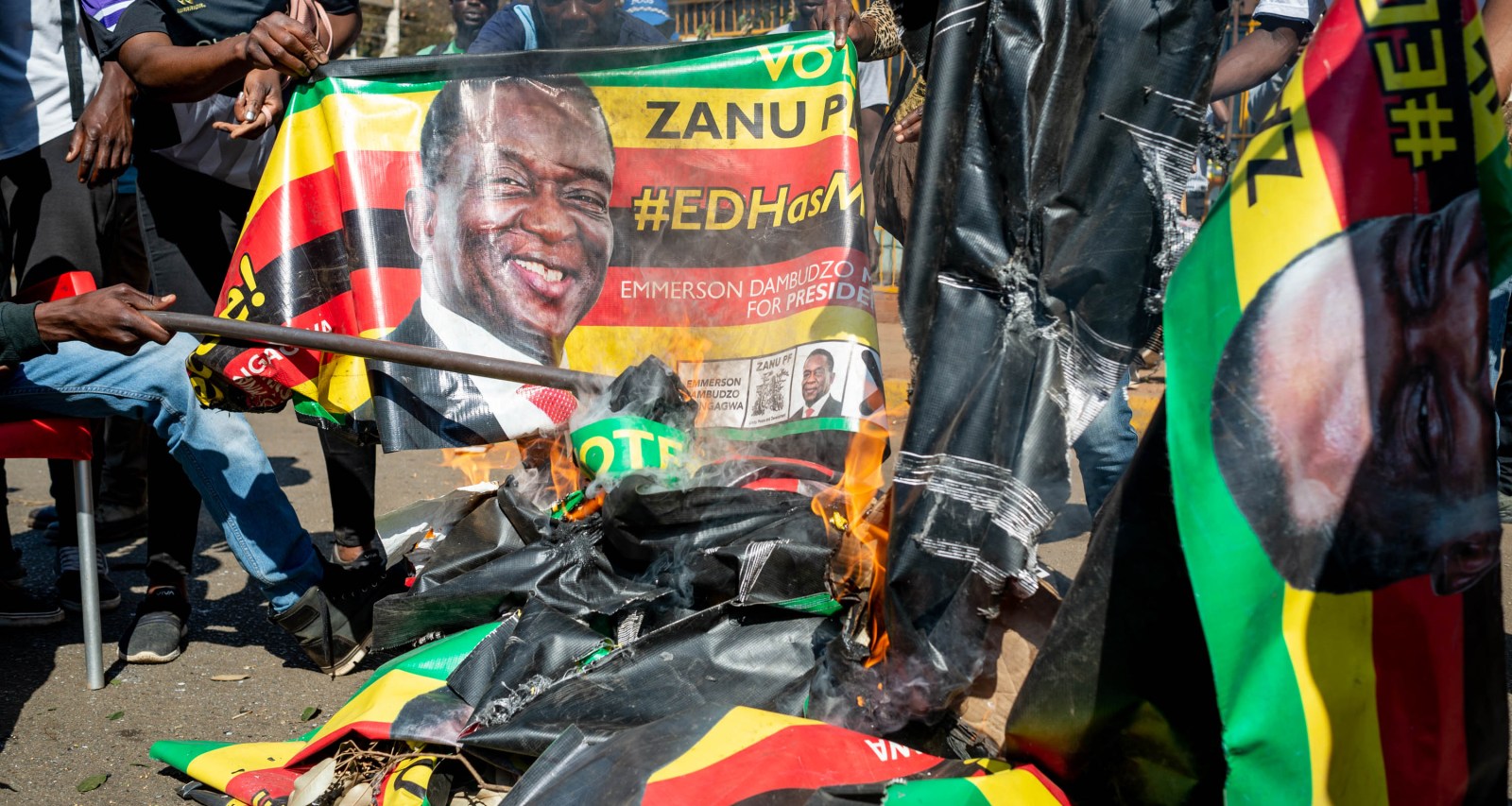 People light fires in the streets during a protest against polling results in Harare, Zimbabwe, 01 August 2018 (issued 02 August 2018). The day saw protests turn violent when police fired rubber bullets and tear gas, before the army was called in and began firing live rounds. EPA-EFE/YESHIEL PANCHIA

The much contested and anticipated 2018 presidential elections results in Zimbabwe were announced in the early hours on Friday, with the ruling Zimbabwe African National Union Patriotic Front (Zanu-PF) leader Emmerson Mnangagwa leading his main contender Nelson Chamisa of the opposition MDC Alliance.

“In terms of section 110 (3) (f) (2) I do hereby declare that the votes received by Mnangagwa Emmerson of Zanu-PF are more than half the number of votes cast in this election; therefore Mnangagwa, Emmerson is therefore duly declared the elected president of Zimbabwe with effect from August 3rd 2018.”

The country was braced for the results in the groundbreaking presidential elections – the first since the overthrowing of the long-serving and ageing former president Robert Mugabe through military intervention in 2017.

Daily Maverick canvassed the thoughts of ordinary residents of Harare.

Tafadzwa Chingwaru, 23, a taxi driver, queried the delays in the announcing of results.

“If you look at the figures the difference is too close, the reason why they have delayed in announcing the results,” says Chingwaru, adding that the electoral body took time to announce the results as they were busy “manipulating the figures”.

The Hatcliffe (a high density area in Harare) resident expressed desolation over the outcome of the election.

“The ruling party lied to citizens that the election was going to be free and fair. As such I will continue busying myself with my usual hustles and all my hopes have been shattered,” said Chingwaru.

Pamela Mhlanga, a women’s rights activist, said very few women made it, if it wasn’t for the quota (special seats set aside for women). The 2013 constitution stipulates that 60 seats be reserved for women as a way of ensuring their inclusion and participation in decision-making and politics.

“We must revisit the quota and fight to change the configuration as political parties are gate-keeping top positions, to women’s detriment. Whoever comes into power must be accountable to the constitution. We must have the 50/50 or we take that authority to court,” Mhlanga said.

Though in urban areas people were looking forward to change, with a ruling party win they expect Mnangagwa to get down to work to address the economic crisis that has rocked the country for the past two decades.

Nevanji Madanhire, a veteran journalist, said the results went according to historical trends.

“MDC Alliance has always dominated in urban centres, particularly Harare and Bulawayo, but Zanu-PF has dominated in rural areas. Unfortunately for the opposition the majority of the voters live in rural areas so Zanu-PF won the overall count,” Madanhire said.

However, Madanhire said everyone wants to move on towards development both at individual and national level.

The election ignited a deadly crackdown on protesters, claiming six lives, with 14 injured.

“Violence is unlikely to erupt after the announcement of the results as the security forces made an unequivocal statement and the citizens will turn against the opposition leader Chamisa if he incites violence,” Madanhire added.

Nonetheless, the streets of Harare on Thursday were clear, with police and army manning the venue before the announcement of the presidential results.

Chamisa has indicated that the MDC will not accept any results that were not in their favour.

“Opposition need to do more to overturn the political demography of the rural areas,” said Hopewell Gumbo, an economics justice activist based in Harare. Gumbo said Chamisa must fight for better results if he feels they were rigged.

As some will be celebrating victory, however, the relatives of the deceased people who died as a result of the shootings by the military were on Thursday preparing to collect their bodies at a local hospital in Harare.

Sylvia Maposa said one of the relatives was on her way to take a taxi to her home when she got caught up in the protest. Maposa, a mother of two and a grandchild, was coming from work when the incident happened. She will be laid to rest on Friday.

Zimbabwe Peace Project and NGO Forum chairperson Jestina Mukoko said they were hearing reports about mayhem in the high density suburbs of Glen Norah and Glen View before the results of the presidential elections were announced.

“In these places the army is said to be beating up people as per the information we have received from our members,” Mukoko said. DM