Winston Ntshona: The SA actor who took Robben Island to Broadway is dead 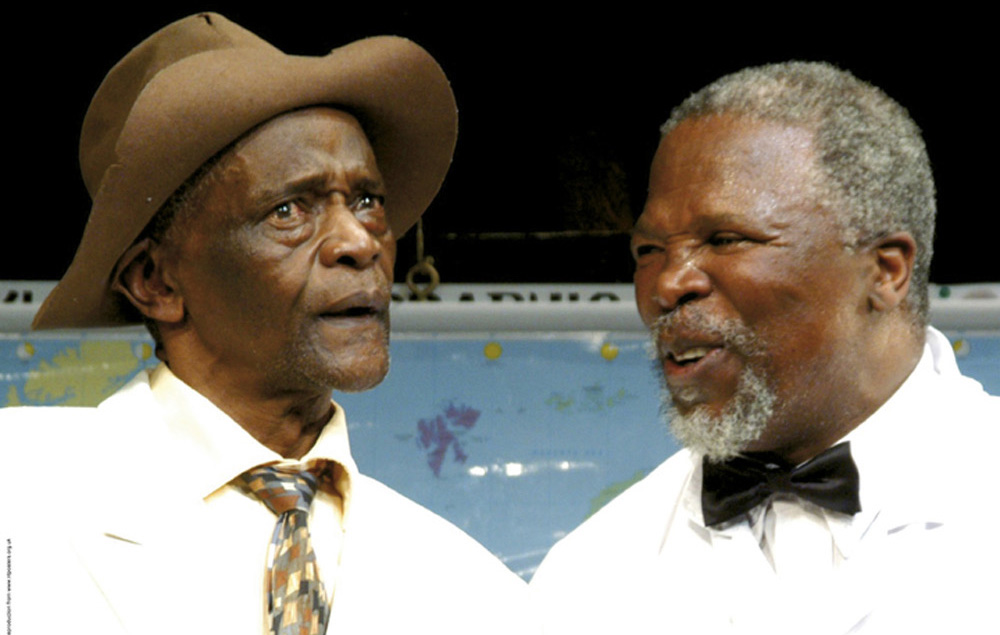 Winston Ntshona and John Kani in SIzwe Banzi Is Dead. Photo: (promotion material from the production).

South African theatre legend Dr Winston Ntshona passed away at the age of 76 on Thursday morning.

Although he was a slight man in his build, Winston Ntshona’s death reverberates as if a giant has fallen. Dr Ntshona was a legend, a master of his craft, and a pioneer. In this day it was not uncommon to hear of South Africans performing their art on global stages, but Dr Ntshona was one of the first, when he appeared in Michael Hastings’ monologue Full Frontal at the Royal Court Theatre in London. This appearance would be the first of many that would see him traverse prestigious theatre stages in the world, including on Broadway.

The name of Winston Ntshona is closely associated with those of John Kani and Athol Fugard. It is just impossible to think of one without the others. With Fugard and Kani, Ntshona wrote the 1973 play The Island, in which he and Kani starred in a number of major international productions of the play over the next 30 years. He and Kani were co-winners of the Tony Award for Best Actor on Broadway in a play for their performance in both The Island and Sizwe Banzi is Dead, which he also co-wrote. In 2010, he was awarded the National Order of Ikhamanga in Silver for his excellent contribution to theatre and the arts scene in South Africa. To quote the citation of that National Order:

“Indelible in all thespians and enthusiasts’ memory is an image of Winston Ntshona and John Kani as they rendered the politically loaded Sizwe Banzi is Dead by Athol Fugard. It was to define ‘protest theatre’ of the Port Elizabeth and later Market Theatre brand; directed and performed right under the authorities’ noses.”

The Island was a pointed and partly humorous protest against the conditions in South Africa’s infamous Robben Island prison. Ntshona and Kani were arrested after a 1976 performance of the play. They were released, but did not perform The Island again in South Africa until 1985. They were also arrested after performing in a third collaboration with Fugard, Statements after an Arrest under the Immorality Act.

Dr Ntshona’s legendary stature was not limited to theatre. He played a series of film roles in the 1980s and 1990s – the most prominent was in 1989 in A Dry White Season, a hard-hitting anti-apartheid film in which his character enlists the help of a white South African, played by Hollywood legend Donald Sutherland, in finding out what became of his missing son. His other film roles comprise the screenplays Night of the Cyclone(1990), The Power of One(1992), Tarzan and the Lost City (1998) and more recently Blood Diamond(2006).

While Ntshona’s passing is a great loss to South Africa, it is comforting to know that he was bestowed with heaps of honours while he lived. Honour befitting the great man, artist and thespian that he was.

In 2012, streets in the arts precinct of Central in Port Elizabeth had their names changed in honour of Ntshona and fellow theatre stalwarts John Kani and Athol Fugard. Chapel Street was changed to Winston Ntshona Street.

On behalf of the Department of Arts and Culture, I wish to extend my deepest condolences to the Ntshona Family: his wife, his children, grandchildren, the community of New Brighton township where he lived, his extended family and all those he loved. May his soul be at eternal rest. Phumla ngoxolo Nkomo, Mntungwa, Malinge, Yengwayo.DM

Nathi Mthethwa is Minister of Arts and Culture. This tribute is based on a statement he released on Thurday.