Township meeting hears of a time when a white war hero was given a farm, a black war hero a bicycle 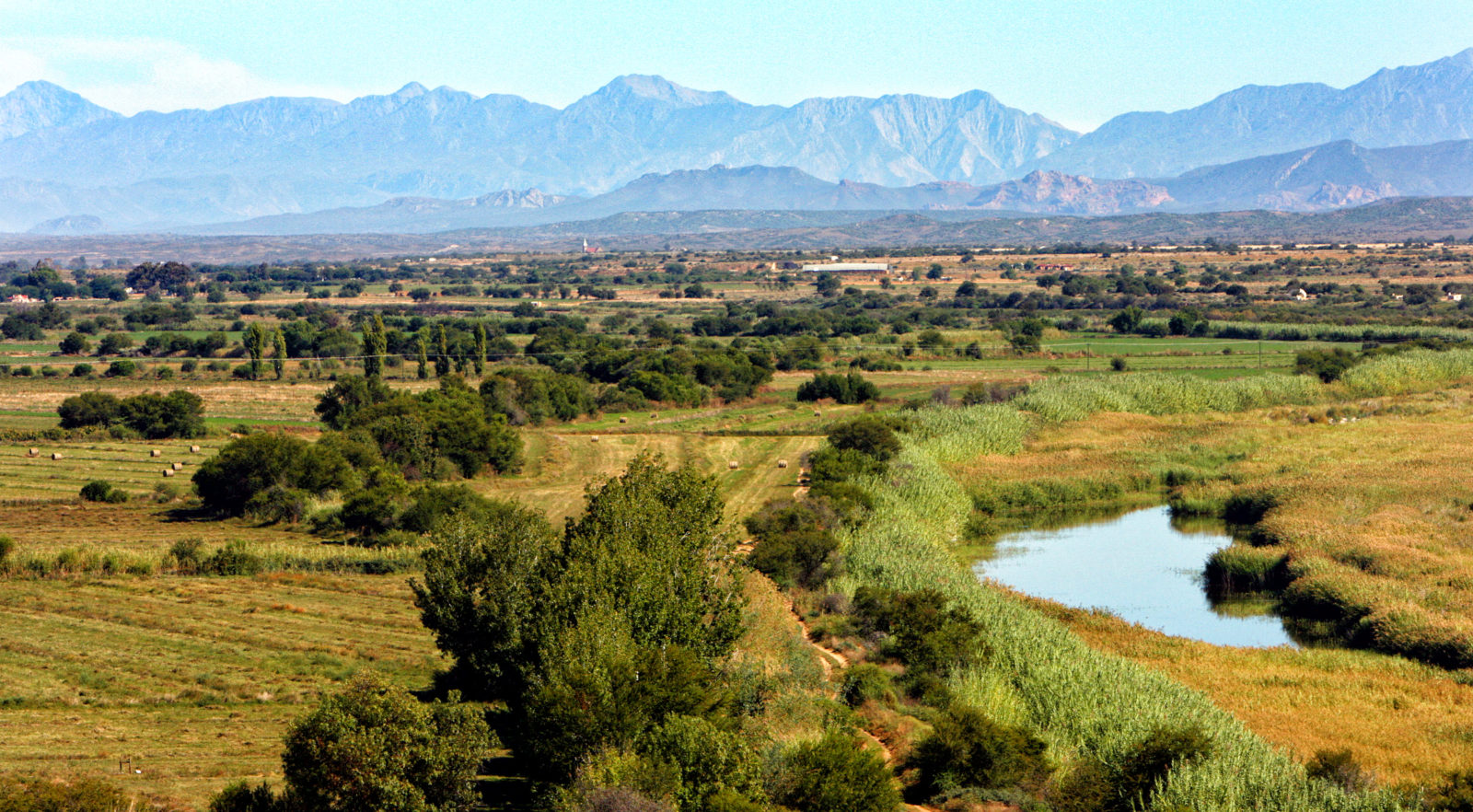 A picture dated 31 March 2007 shows a view of Die Eiland farm in Oudtshoorn. As part of the South African government's land redistribution programme, the 83-year hectare farm was sold by its white owners to black farmworkers, with the farmers electing to stay on as mentors with a majority stake in the business while training the new owners in what is being hailed as a model form of cooperation between black and white. EPA/JON HRUSA

In the game of politicking, land expropriation without compensation means different things to different politicians. But as Parliament’s public hearings on Wednesday in Oudtshoorn showed, for those South Africans at the sharp end of poverty and inequality – and years of hitting the brick wall of officialdom – there’s much, much more at stake.

“I don’t see any contradiction in that and I don’t think in that in any way that (the party presidential announcement) undermines the work of the committee.”

Some 12 hours earlier ANC President Cyril Ramaphosa, late on Tuesday evening, had announced the ANC’s support for a constitutional amendment to make expropriation without compensation possible in an address to the nation in an unprecedented move that blurred the lines of party and state. The ANC would, through the parliamentary process, “finalise a proposed amendment to the Constitution that outlines more clearly the conditions under which expropriation of land without compensation can be effected”, Ramaphosa informed the nation of the decision by the ANC lekgotla.

Clearly the countrywide parliamentary public hearings on whether to amend Section 25 of the Constitution for expropriation without compensation are having an impact since they started in late June 2018.

Ramaphosa raised the input at the public hearings, as did ANC economic transformation sub-committee chairperson Enoch Godonwanga on Wednesday during the official ANC lekgotla briefing.

“We cannot ignore the voices of our people,” said Godongwana, adding that Tuesday night’s party-presidential announcement did not undermine Parliament’s work as it’s wrapping up the public hearings. The implication of those pubic hearings was that “most of our people favour the route we are taking”.

That route now being expropriation without compensation to be clarified through a constitutional amendment in the context of comprehensive land and agrarian reform. This stands in contrast to the EFF’s position of wholesale nationalisation of land.

The ANC’s position, while recognising the need for redress, remains embedded in economic talk – compensationless expropriation “to advance economic development, increase agricultural production and food security”, as Ramaphosa had put it, and, in the ANC’s lekgotla decision briefing, linked to land that, for example, is left unused, be it due to the owners’ incapacity or because of speculative purposes.

But that’s not quite what has emerged in the public hearings from Limpopo to the Western Cape. Nor in Oudtshoorn in the DA-run Western Cape.

There’s land, an economic quantity with profits, benefits and costs. And then there’s land, a subject of pain, distress and being made to feel second and third class, democracy notwithstanding. And what view is taken on this land question is in no small way determined by race.

White South Africans, who took to the microphone at Nevada Hall in Bongolethu – isiXhosa for “our pride” – township in the ostrich capital of Oudtshoorn, argued the economic case against a constitutional amendment to allow expropriation without compensation.

Black South Africans, without fail, spoke of dispossession, forced removals, and the impact this has had on families in 2018 and long before. Many of those who attended the public hearings at the modest community hall located between the clinic and a tavern had travelled from as far as George to make their views known. More than one thanked the committee for listening to them, as if it’s the first time in a long, long time they were taken seriously as people and citizens.

Two men told the meeting how their fathers fought for “king and country”, as one put it, but on their return from war were given bicycles while white soldiers were given farms.

“I was dispossessed without compensation,” Jacques Booysen told the meeting.

“As a child I had to watch how our houses were bulldozed… The pain is still here… I can show you now, here’s my oupa’s (grandfather’s) land here… and here.”

And his experience was not unique as an 84-yearp-old man recounted the bulldozers razing his childhood home, leaving the family stranded for days before the council moved them elsewhere. Several speakers raised questions about unresolved restitution claims.

For small-scale farmer Zolile Salman, lack of land means he has to keep his donkeys and cattle one kilometre away on land that is a driedup riverbed.

“They are there because we don’t have land,” he told the MPs, adding that authorities now were “busy taking our animals”.

And, somewhat unusually to many other hearings, on Wednesday farmworkers also got a say. Calitzdorp farmworker Kitty Jacobs told the parliamentarians how nothing was done for farmworkers’ dignity.

“We sit on farms where people are living in houses that are so stukkend (broken)… If the house falls on you (the farmer says), it’s your issue,” she old the meeting, adding that there was poverty on farms, teenage pregnancy and substance abuse.

“If you had land, you have the freedom to look after yourself.”

A series of Khoi headmen and headwomen argued that as First Peoples, the land of South Africa actually belonged to them, and that must be considered in expropriation without compensation.

There were the usual politically inflected speeches, some wowing war, others speckled with comrade this, and comrade that. The EFF again mobilised well, and got its call for wholesale nationalisation of land across. Or as Sivuyile Adams from Thembalethu, George, said:

“We are going to take the land. Then we will lease it back to them (white South Africans).”

And there were some interesting dynamics, as is bound to be when those with power and those without find themselves treated equally. Three minutes at the mic – that’s it.

A group of whites arrived together and sat towards the back of the hall, applauding one of their own who made his three-minute submission – then left, all together.

Or how the white representative of the local farmers association got his comeback from a black Oudtshoorn resident, who disputed the earlier numbers spin in the economic argument against compensationless expropriation.

“Our people can farm. Our people is ready to farm. We just want our land back,” was that response in Afrikaans, triggering applause in the hall.

It was over by 16:00, and the committee members, and support staff, left to move on to Beaufort West, where the public hearings are being held on Thursday. It’s now the tail end of five weeks of public hearings across South Africa, ending on Saturday in Cape Town.

Then come the discussions and deliberations, none of which will be easy.

“It’s going to be difficult… It’s not a fait accompli,” said Smith.

The ANC and EFF have different views on compensationless expropriation, and the DA and IFP oppose it.

“It is incumbent on the Speaker… as the guardian of this constitutional body, to protect it from being undermined by political machinations and brinkmanship. I implore her to act in the best interests of the country, not the ANC,” Maimane said in a statement.

Perhaps that course of action was the reason the DA was not included in United Democratic Movement (UDM) leader Bantu Holomisa’s correspondence to other political parties at Parliament on Wednesday. It was a call for a meeting to discuss and prepare in respect to a constitutional amendment for expropriation without compensation.

“Given that we all supported this motion and created a legitimate expectation with the majority of our people that this matter will be put to rest, we have to ensure that we sing from the same hymn book, so that we do not become stuck on the need to change the relevant constitutional provisions on land or finding alternative solutions,” wrote Holomisa.

If by the end of this parliamentary process there is a decision for a constitutional amendment for expropriation without compensation, a whole new process, including renewed public hearings, must unfold.

It’s a process that could take months, rather than weeks – regardless of impatience expressed at Wednesday’s public hearing, as at previous ones. And that’s something politicians eager to use land as a 2019 election issue should not choose to forget. DM